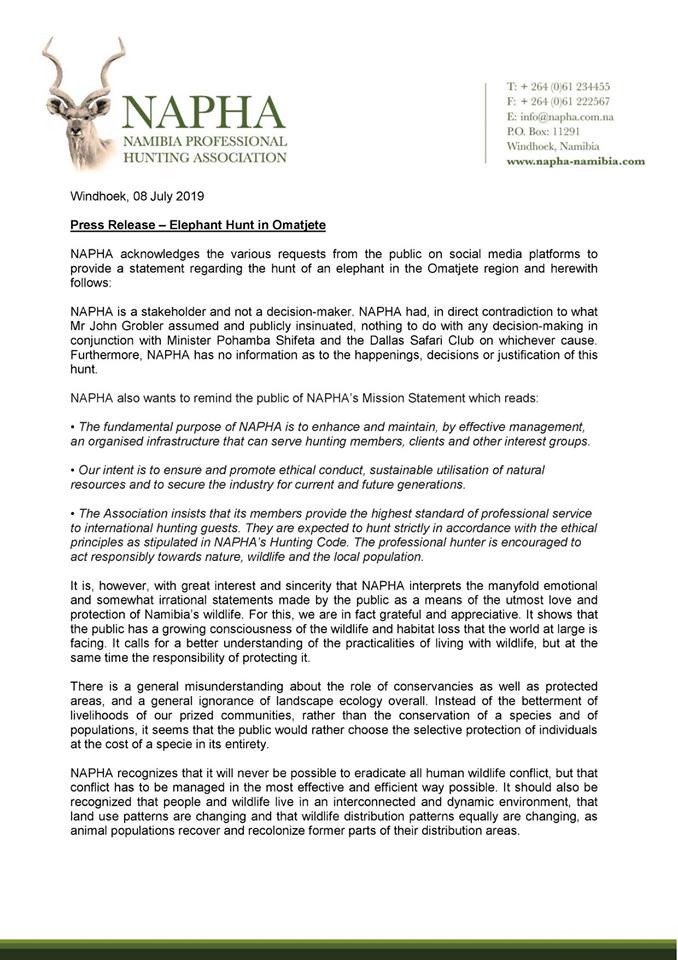 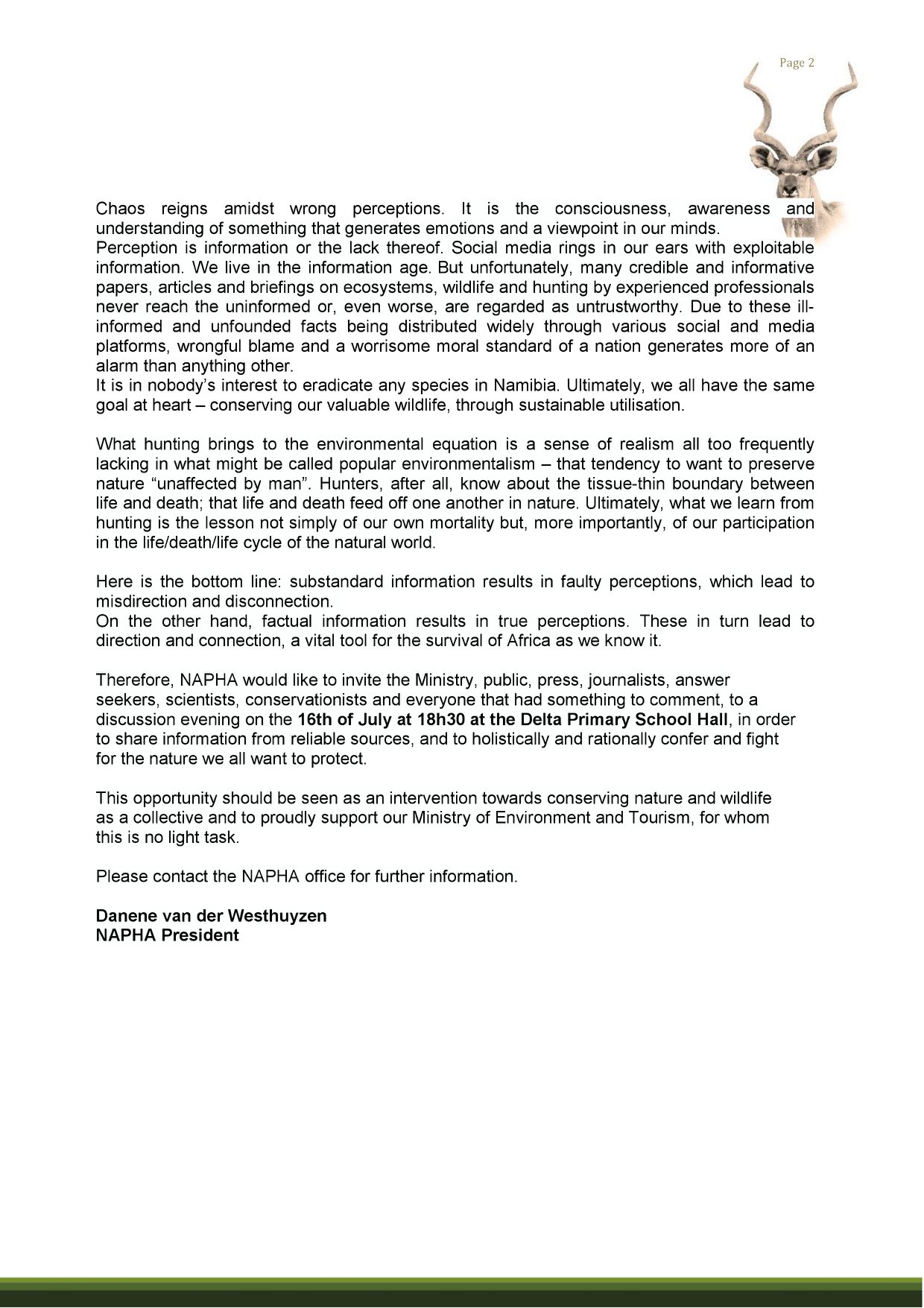 NAPHA acknowledges the various requests from the public on social media platforms to provide a statement regarding the hunt of an elephant in the Omatjete region and herewith follows:

NAPHA is a stakeholder and not a decision-maker. NAPHA had, in direct contradiction to what Mr John Grobler assumed and publicly insinuated, nothing to do with any decision-making in conjunction with Minister Pohamba Shifeta and the Dallas Safari Club on whichever cause. Furthermore, NAPHA has no information as to the happenings, decisions or justification of this hunt.

NAPHA also wants to remind the public of NAPHA’s Mission Statement which reads:
• The fundamental purpose of NAPHA is to enhance and maintain, by effective management, an organised infrastructure that can serve hunting members, clients and other interest groups.
• Our intent is to ensure and promote ethical conduct, sustainable utilisation of natural resources and to secure the industry for current and future generations.
• The Association insists that its members provide the highest standard of professional service to international hunting guests. They are expected to hunt strictly in accordance with the ethical principles as stipulated in NAPHA’s Hunting Code. The professional hunter is encouraged to act responsibly towards nature, wildlife and the local population.

It is, however, with great interest and sincerity that NAPHA interprets the manyfold emotional and somewhat irrational statements made by the public as a means of the utmost love and protection of Namibia’s wildlife. For this, we are in fact grateful and appreciative. It shows that the public has a growing consciousness of the wildlife and habitat loss that the world at large is facing. It calls for a better understanding of the practicalities of living with wildlife, but at the same time the responsibility of protecting it.

There is a general misunderstanding about the role of conservancies as well as protected areas, and a general ignorance of landscape ecology overall. Instead of the betterment of livelihoods of our prized communities, rather than the conservation of a species and of populations, it seems that the public would rather choose the selective protection of individuals at the cost of a specie in its entirety.

NAPHA recognizes that it will never be possible to eradicate all human wildlife conflict, but that conflict has to be managed in the most effective and efficient way possible. It should also be recognized that people and wildlife live in an interconnected and dynamic environment, that land use patterns are changing and that wildlife distribution patterns equally are changing, as animal populations recover and recolonize former parts of their distribution areas.

Chaos reigns amidst wrong perceptions. It is the consciousness, awareness and understanding of something that generates emotions and a viewpoint in our minds.
Perception is information or the lack thereof. Social media rings in our ears with exploitable information. We live in the information age. But unfortunately, many credible and informative papers, articles and briefings on ecosystems, wildlife and hunting by experienced professionals never reach the uninformed or, even worse, are regarded as untrustworthy. Due to these ill-informed and unfounded facts being distributed widely through various social and media platforms, wrongful blame and a worrisome moral standard of a nation generates more of an alarm than anything other.
It is in nobody’s interest to eradicate any species in Namibia. Ultimately, we all have the same goal at heart – conserving our valuable wildlife, through sustainable utilisation.

What hunting brings to the environmental equation is a sense of realism all too frequently lacking in what might be called popular environmentalism – that tendency to want to preserve nature “unaffected by man”. Hunters, after all, know about the tissue-thin boundary between life and death; that life and death feed off one another in nature. Ultimately, what we learn from hunting is the lesson not simply of our own mortality but, more importantly, of our participation in the life/death/life cycle of the natural world.

Therefore, NAPHA would like to invite the Ministry, public, press, journalists, answer seekers, scientists, conservationists and everyone that had something to comment, to a discussion evening on the 16th of July at 18h30 at the Delta Primary School Hall, in order to share information from reliable sources, and to holistically and rationally confer and fight for the nature we all want to protect.

This opportunity should be seen as an intervention towards conserving nature and wildlife as a collective and to proudly support our Ministry of Environment and Tourism, for whom
this is no light task.
You must log in or register to reply here.