I was faced with a pressing problem - there was a tiny little prehistoric-looking animal called a dik-dik required by Safari Club International to qualify for my African 29 Grand Slam, a long-held dream of completing. Now there six different species of these diminutive little creatures recognized by SCI but they all seemed to require lengthy and rather expensive jaunts into the plains, deserts and/or jungles of the Dark Continent to acquire. Enter the Damara variety... 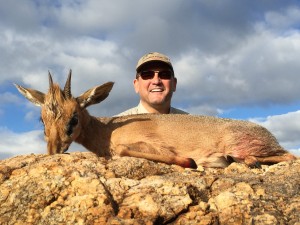 Named after the peoples that inhabited most of central Namibia prior to the mid-19th century, this little creature could be hunted a short flight from Johannesburg, South Africa, so my outfitter Jacques Senekal / Africa Maximum Safari made arrangements for Johnny Schickering, owner of Namibian-based Agarob Safaris to meet us in Windhoek where we'd spend a week chasing them about the thornbush. 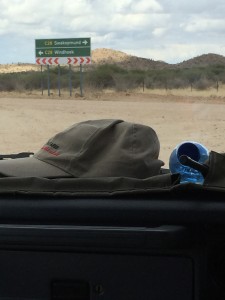 I've been on many hunts that Jacques arranged so my (his) PH Walla and I met Johnny at the Windhoek airport and lit out on a three-or-so hour drive to a farm where they were reported to scurry about in great numbers. What I failed to plan on was nearly breaking my big toe right out of the chute, however. Stubbing my barefoot rather briskly on the one small step-up to my room almost immediately after arrival let me know right away it was bound to be an interesting hunt.

As usual, Jacques (and, as it turned out Johnny) had done their homework very well - we had the little bugger sorted out within a couple hours on the first morning out - so Johnny suggested we light-out after lunch to his farm (cattle ranch) and see what other kind of table fare we could bring to bag from the back of his horses. 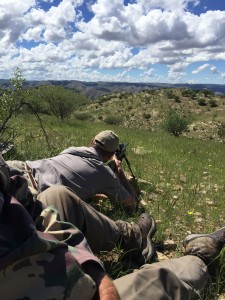 335 yards from the tip of the muzzle is a zebra that doesn't know it's retiring in Florida soon.

We were greeted at the Agarob Safari lodge and homestead by Johnny's lovely wife Mariana. As we discovered this operation is very much a family affair with Johnny doing the guiding and Mariana the hostessing and cooking. And the entertaining. And the bags of frozen veggies for ice packs on sore toes. Man, those sure did help! Good thing we were hunting on horses...

The SOP at Agarob is to have Johnny's wranglers head out into the hills with the horses well before dawn while we enjoy a leisurely java or two with breakfast. Grab the rifles and hop into the Land Cruiser for a hour's worth of 4X4'ing to the horses, then mount-up for the day's hunt somewhere on Johnny & Mariana's 37,000 acre mountain haven. By taking the truck the hunters save a few hours of riding and can get right down to business when they get there, bit of logistical genius if you ask me. Great opportunity to catch a bit of the Zzzzzz's too. 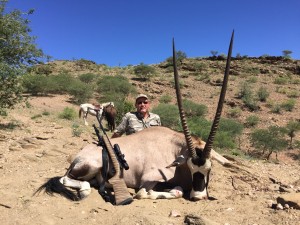 If you want a monster gemsbok, this is the place to be.

The hunt itself went great, collecting a couple of Hartmann's mountain zebra, pretty much an exclusive to Namibia, and a nice bull gemsbok. In case you didn't know, by the way, for some reason the plains game in this area are real monsters, like South African game on steroids. On top of that they are all free-ranging, no high-fences or game feeders.

Kudu, Steenbok, Klipspringer, Warthog, Black and Blue Wildebeest, Hartebeest, Blesbok, and Springbok, are also roaming free on the ranch so it's be pretty easy to make a very fruitful week or two out of the whole experience. One particular moment I recall was sitting on horseback hunting in the Namibian mountains, and actually pinching myself to be sure it wasn't a dream. 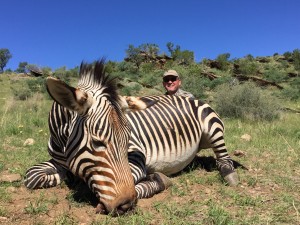 Note the unique tan coloring on the Hartmann's zebra.

But one thing I'm absolutely sure of, hunting on horseback with Johnny, Mariana and Walla certainly was, and is, a dream come true.

Thanks for the hunt report. Gemsbok and zebra hunting in that area can lead to a hunting addiction.

Outstanding, thanks for the report.

Glad you had a great hunt and got your dik dik.

Hunting by horseback in Africa....sounds like a unique hunt.

Congratulations and thanks for sharing your report.
And here I am, returning to Africa of many faces;.... the sloe-eyed temptress with flowers in her hair who stole my youth and my heart, and left me an old man with a kaleidoscope of conflicting memories of many dashed hopes and some fulfilled dreams. E. Echols

They talk about the African bug and then there is that very infectious Namibian bug. Good read

Nice twist to the hunt.
Congrats on your trophies.

Thanks for posting a report.

One day I hope!

Congrats on the dik-dik and all of the rest!
HUNTERS make importation bans work!

Sounds like a great hunt with a great outfit. I know you have taken some impressive trophies with Jacques and Walla. Enjoyed seeing you pics and video on Africa Maximum Safaris website. Hartmans Zebra is very cool.

I should be landing in exactly 5 weeks from this moment to hunt with them on my second safari.

Congrats for a great hunt, and thanks for sharing !

A great area to hunt. Congratulations!

Nice report. I can imagine the fun of riding horseback through the hills was great!

Sent this link to my wife and now she wants to shoot a big Gemsbok from horseback
Why we hunt, even lions? Real hunters need thriving wildlife, so we help make it happen. - Olivia Nalos Opre
You must log in or register to reply here.