I havc just returned from my first trip to Africa. I will try my best to do a report and post some pictures.

I hunted with Pieter Delport of Eintracht Jagd Safaris. He has been so nice to deal with from the start. answering my every question no matter how silly it may have seemed to him. I am from western Canada, and had no idea what to expect from Namibia.

The game seen was amazing, the country and people there as well. A trip of a lifetime for me , and will do my best to return there.


The flight there was a bit of an experience, Had to unlock my gun case in Toronto for inspection. The airport in Addis Ababa decided it would be convenient to pull me off the plane for a security issue after i was comfortably seated in the last row of the plane. So off we went racing in a bus to a tunnel where we had to run in the dark to a conveyor belt where my gun case was. I was asked to open the case and show them my papers. They didn't know what papers they wanted , just wanted to see papers. I showed them a bunch I had , in my bag and in my gun case. It was too dark to see well, so i had to use my cell phone flashlight to show them the serial number matched my papers i had for my rifle. It was a bit unnerving , but I kept smiling and all went well. I locked up the gun case and we had to run to the bus, race to the plane, and run up the stairs onto the plane , and in a minute it was off onto the runway and we took off. I was quite sure there was no way my rifle or suitcase made it onto the plane. I was wiping the sweat off my head wondering how i would get my rifle , or if it would arrive in Windhoek.

It was a nice flight to Windhoek, and to my surprise after going into the terminal there was my rifle and bag waiting for me. Relief isn't the word for it. 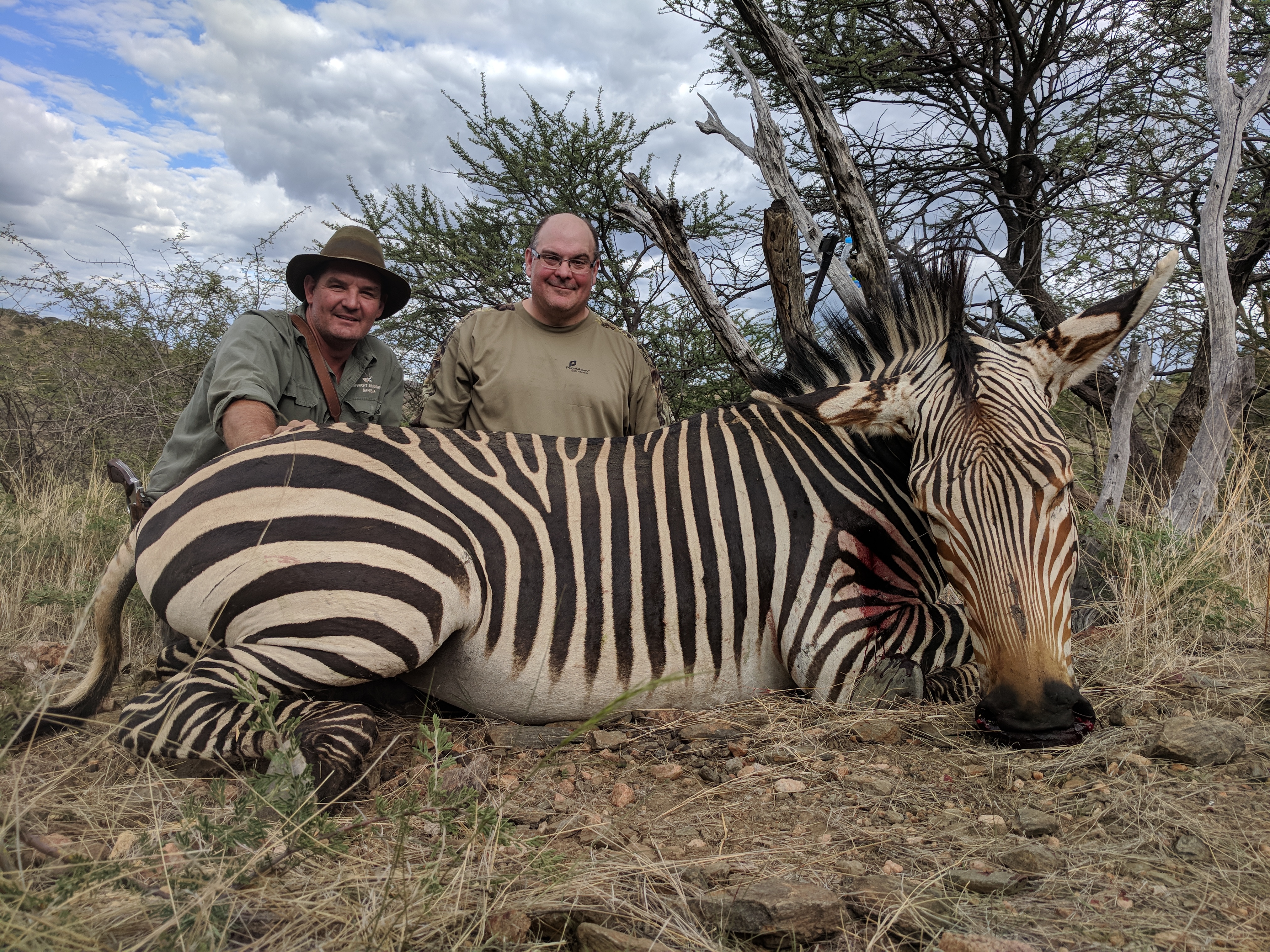 The police procedure to check firearms into the country was simple, with very competent and polite people working there. I have never flown anywhere with a rifle , and was so glad for their friendly service. They were not interested in playing pass the rifle like the airport security in ethiopia,It was like they had never seen a rifle before so all had to touch it before i could put it back in the case.

After the rifle paper was done Pieter was waiting outside the door. It was a very nice drive to his farm, east of the airport, approx an hour drive or so.

Once at the farm I was shown my room, a very nice set up. I met a few people there that work for Pieter, had a beverage and then it was off to the range to check my rifle.

My rifle is a simple CZ 550, in 375 H&H, topped with a Schmidt and Bender Zenith 3-12 , german 4 reticle. I like the set up very much and have used it on a lot of game in Alberta with great success. I have been loading 260 grain accubonds with rl15 powder. The rifle was a bit high at 100, as I thought it would be as it has never seen the temperatures I was shooting it in now. I dialed the scope down a bit, shot hit perfect so we were good to go.

One thing I learned quick there is when it is time to hunt there is no messing around. Pieter is a serios PH, and the trophies he has on display in his lodge show this. So up onto the Land Cruiser and off on a tour we went. We did not go far and a herd of Black wildebeest were running by. We seen many Oryx and Hartbeest as well. How they spot them so fast and can tell their trophy quality is beyond me. I think we drove 20 km or so, then Pieter said it is time to walk.

I stayed behind him , trying to be as quiet as I could, spending more time looking where I stepped than looking where we were going. He was glassing in one spot for some time, so I did the same there were Oryx and Hartbeest within 300 meters or so. We went closer using the bushes and trees as cover and one oryx really got his attention, the sticks went up after another 100 meters or so and he told me to take the shot when I was comfortable, I was bloody nervous to say the least.
The Oryx was quartering away, and grazing on some bushes, I finally felt steady enough and squeezed, and down the Oryx went. Pieter said very good shot, I was elated and relieved. My first African animal down, and a nice shot .

He estimated the Bull to be around 40 inches, which he said is very nice. Pieters father was with us, and he concurred it was a great trophy. 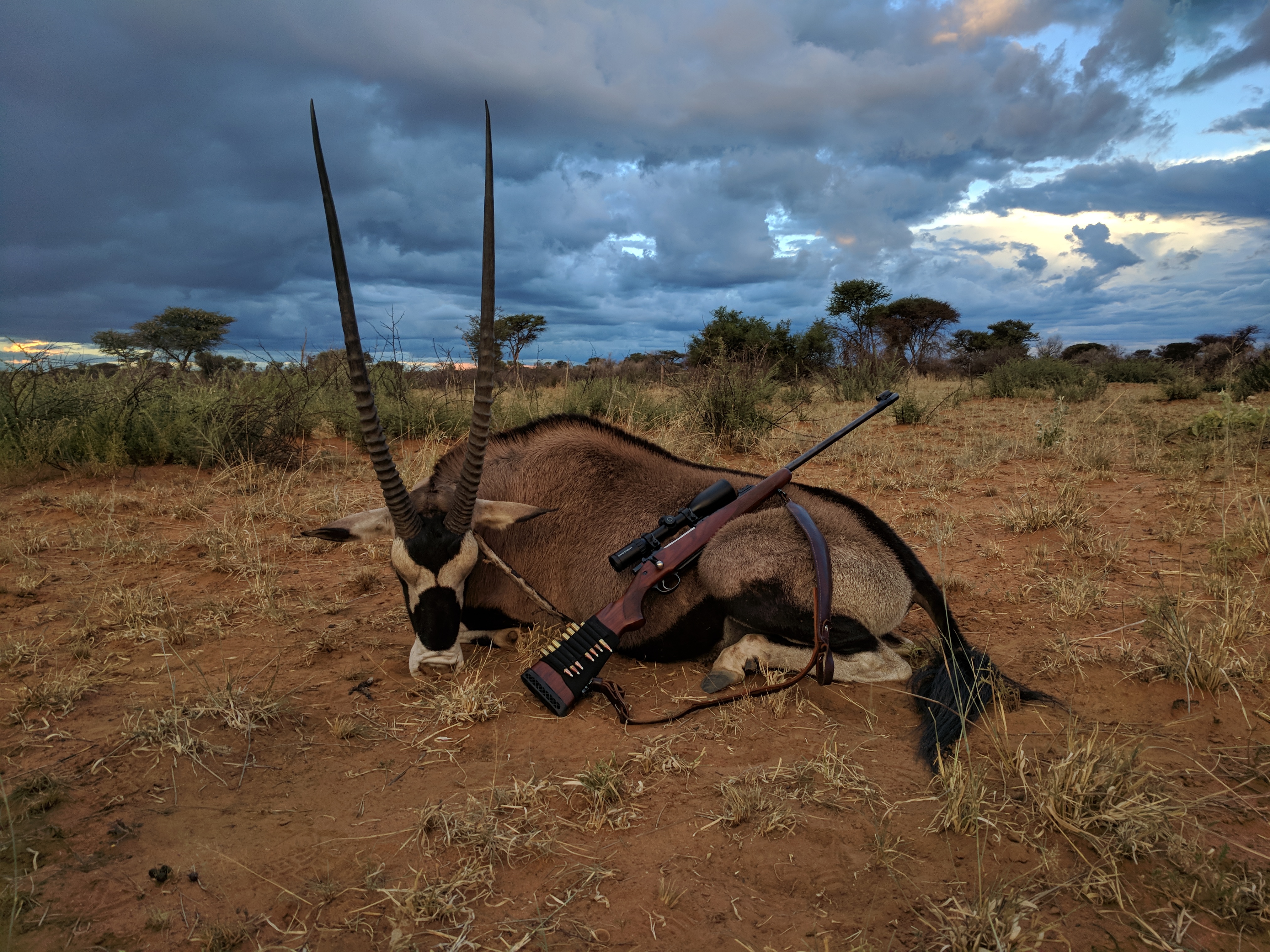 Great story so far. I look forward to the rest of the installments.

Glad to see you starting your report. I am sure the gun check at the airport had you wondering about the gun making with you there.

That is a dream bull oryx and I hope to find his brother in July.

Congrats on a nice oryx and looking forward to hearing more!
JasonY

After we took a bunch of pictures of the Oryx, we loaded it up in the land cruiser , and back to the lodge. Tony the cook was waiting with an ice cold beer for me, much appreciated I will say! A wonderful supper was served then off to bed for me. I was exhausted from the flights and the excitement of the first days hunt.

The second day started with a great breakfast and good coffee. Then onto the Land Cruiser and off we went. Many more Oryx and Hartbeest were seen, more Wildebeest, and guinea foul were everywhere it seemed. I spent a lot of time taking pictures and trying to video some of what i was seeing, truly amazing scenery

My wish list for this hunt was Oryx, Warthog, Hartbeest, Kudu, Mountain Zebra for my wife and a Red Hartbeest.

Pieter said the Kudu would take a bit of work as Rabies has been claiming many of the Kudu in that area. He assured me there were many in the mountains where we would be going after the zebra.

We were seeing many warthogs , but none seemed to get Pieter excited until late in the afternoon. He spotted one a long ways off and the stalk was on, he was excited and man can he walk fast. We must hurry he said, good grief, I am not used to hurrying in above 30 celcius temperatures, but did my best. We got within approx 200 meters of the warthog when I seen it for the first time, the sticks were set up and I tried to steady the reticle on him. I could see his tusks were very nice. The warthog was staring at us, I was a wee bit out of breath and had a hard time getting steady enough. I kept breathing slowly trying to lower my pulse a bit when the warthog suddenly turned his head and I could tell he was going to bolt. I squeezed the trigger , and down he went.

Pieter assured me it was a good shock so we walked to where he lay. I dont know a good warthog from a bad one, but this one seemed very nice to me. 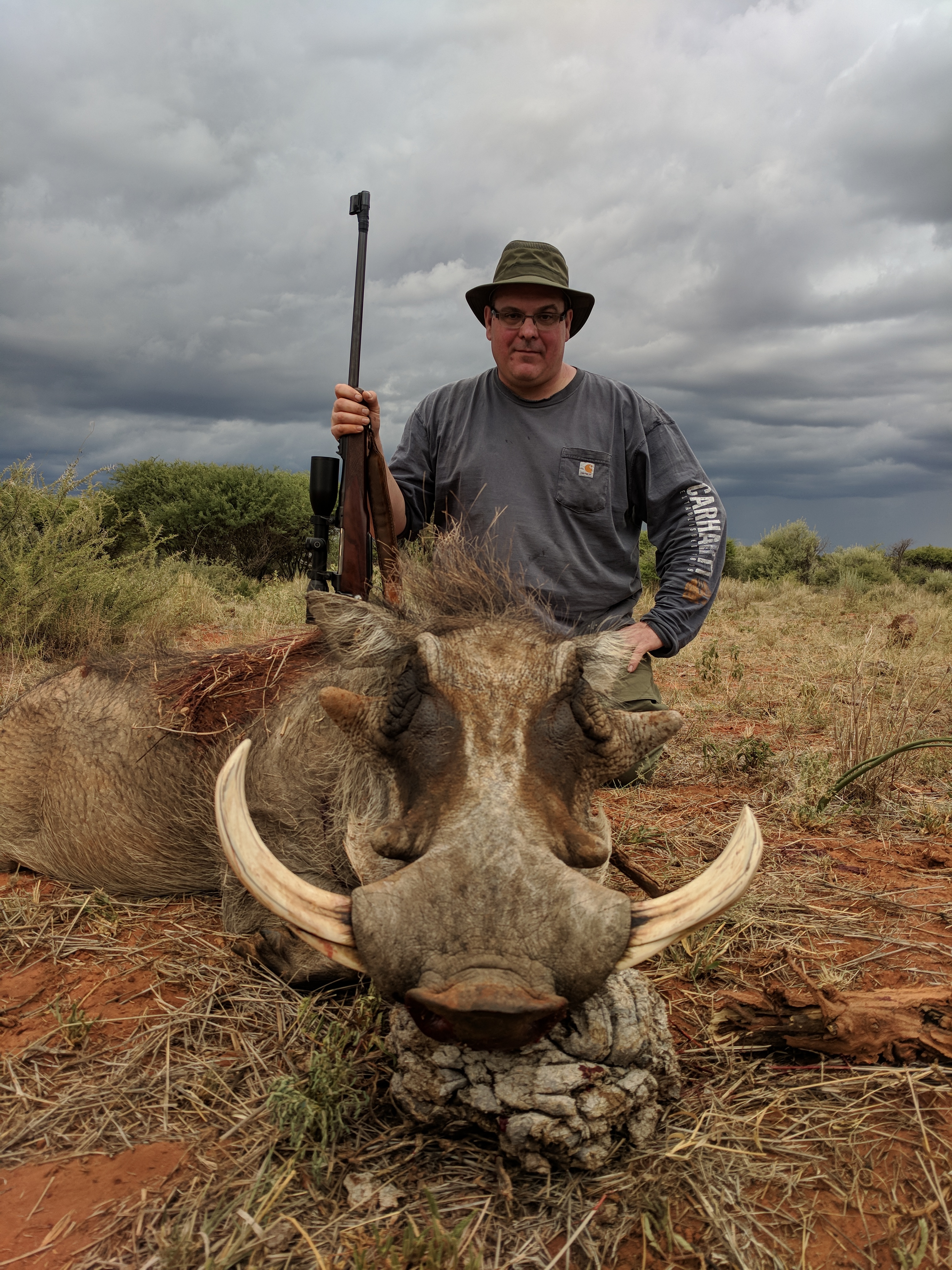 Well done, can't wait for the rest of the report.

Both of your animals so far are excellent trophies. Good shooting. Congrats
Bruce

Tremendous Trophies so far
Be Yourself Everyone Else Is Taken

both animals look awesome! Looking forward to the rest of the report.
cant wait till last week of april. Heading to the limpopo!

Outstanding Oryx, a fantastic first African trophy for you. I believe it will be a Gold Medal on the Namibia scoring system. http://www.napha-namibia.com/conservation/the-medal-system/

Awesome so far. Please continue with lots of pics of the animals and the facility. I’m sure interested in this report.

Man you are killing it. Great stalks, great shots, and two awesome animals. That Oryx bull is a dream.
Can’t wait to read more.
"There is nothing so good for the inside of a man as the outside of a horse."- Winston Churchill

Thanks for sharing so far! Some nice critters you took!
John 3:16

Thanks so much for the comments! I am having a bit of a time to load the pics from my camera on to the computer. I have too many pics to show but will try to load as many as I can.

Impossible to have too many pics. You’ll be glad you took them. Keep coming with the story and pics!

Day 3 started with a long stalk through the thorns to an area Pieter knew had good hartbeest. We spooked a few oryx on the way. I was tangled up more than once in the thorns, had to reach back for my hat hanging in the thorns more than once. There is no vegitation here in Alberta that compares to those dang thorns.

After 30 minutes or so the thorns were more sparse and I could actually start to see more than ten yards. Some hartbeest came into view, some nice males but there was one male in between us and the bigger ones. Pieter knew we would spooked it, and the others so he set up the sticks and he decided we would take it for meat, as it would never be a trophy bull. He set up the sticks and told.me to take it on the shoulder. There was a bit of a bush beside it, I held where I thought the shoulder was and squeezed. The Hartbeest jumped and ran approx 50 yards and piled up. The shot hit where I hoped it would. I thought it was a.great animal but Pieter assured me we were after a trophy and this one was just for the meat. We took a few pics , loaded it and took it back to camp. 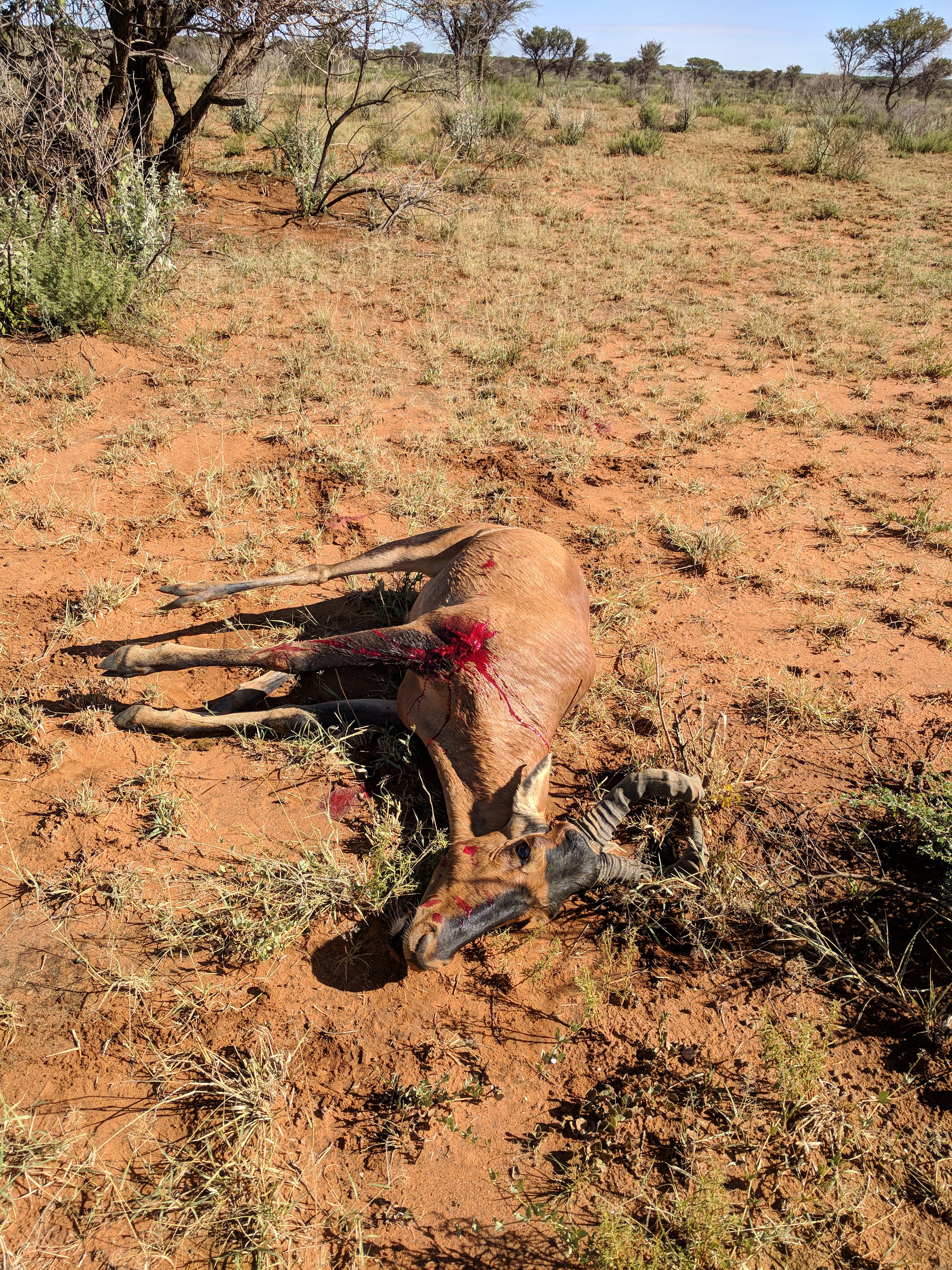 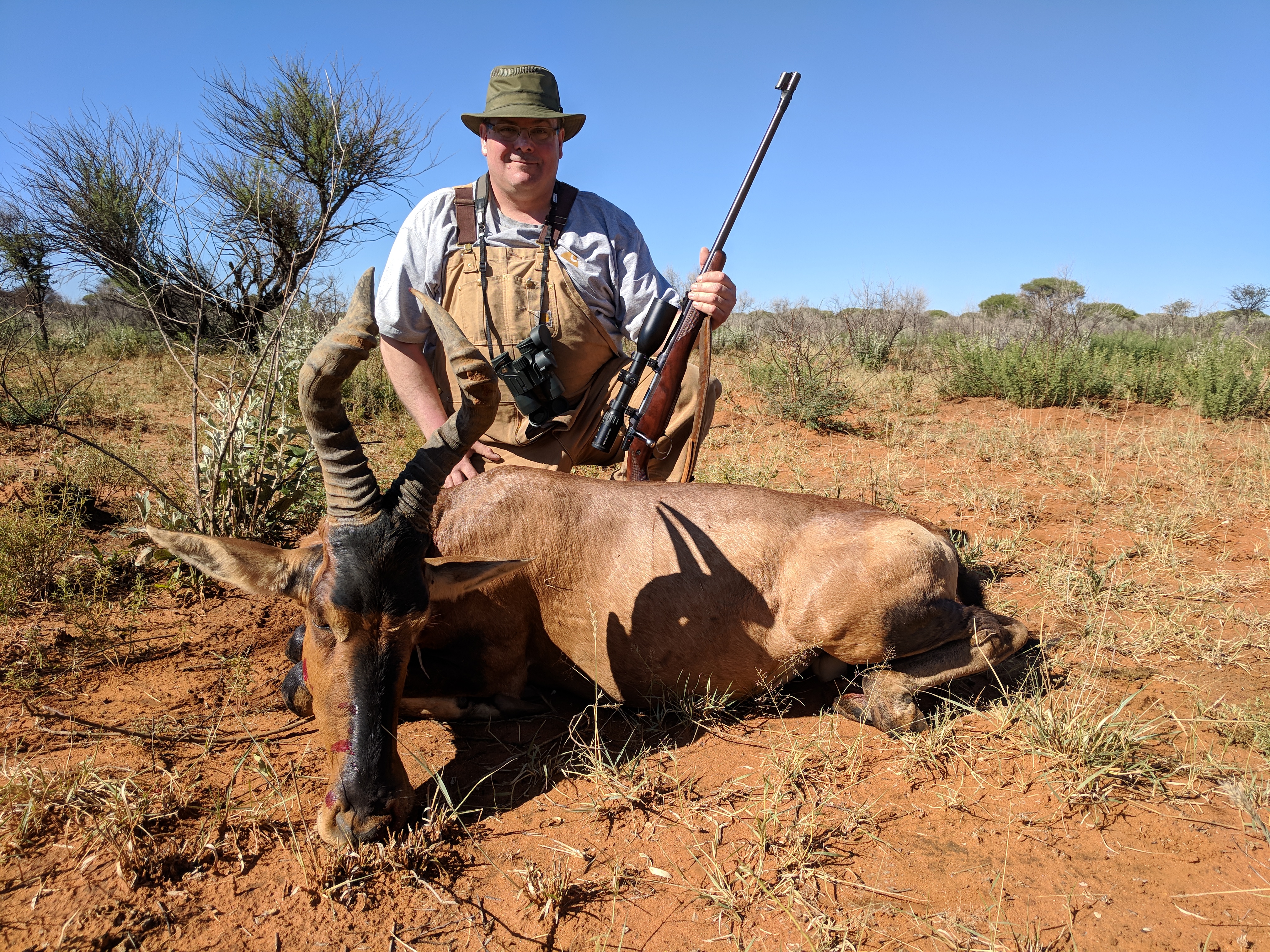