Very unique markings on your Kudu. I hope that cape was treated well.
Congratulations.

BRICKBURN said:
Very unique markings on your Kudu. I hope that cape was treated well.
Congratulations.
Click to expand...

Thank you. He was skinned in preparation of a shoulder mount. I will say, if I ever go back and I shoot a Kudu smaller than him I will be prepping him for a rug and just do a European mount on his head. The coat was BEAUTIFUL.

BRICKBURN said:
That Hartebeest is a MONSTER. That Black Wildebeest is not too bad either.
Click to expand...

Thank you. My dad and I decided in all of our pictures we would have a hand on the animal to show a bit more of a true size reference. I love the classic 10 yard safari pics, but we wanted to keep it a bit more natural.

You have had a great safari so far. Nice trophies. Your writing style is easy to read. Thanks for sharing. Looking for the rest. Congrats.
Bruce

Great safari. The black face of the Kudu and white markings are very different from my SA bull. Unique and very nice. I also like the zebra and monster red. Keep the story coming!

How about that hartebeest! Wow!

Those mountain zebras sure are a neat animal, too.

Awesome Kudu! love the color. congrats on a great hunt and really cool that you got to share it with your dad!

courage is not having the strength to go on; it is going on when you don't have the strength!
-Teddy Roosevelt

Your kudu is gorgeous. And the hartebeest? Holy moly what a beast!
"I don't need to shoot farther...I need to hunt closer." - G. Sitton

Awesome hunt, especially to share with your dad. Congrats
That Kudu is incredible, love the dark cape on him.
"There is nothing so good for the inside of a man as the outside of a horse."- Winston Churchill

Great report and some fine trophies! So nice to hear of sons and fathers going hunting together.
Africa on my mind.

I'm really enjoying this report. That Kudu is a stunner.

@hoguer , I am enjoying your story. I was wondering when you were going to stretch the legs of those custom 300WM rifles.
That was some good pentration on the Kudu for ELD-X. What were your observations on the 2 weights and terminal performance? Short and long distance as the second shots on the Zebra were from a fair distance.(Penetration, wt retention, etc)

Sorry for the radio silence! It has been a busy few weeks! More to come soon...

Neale said:
@hoguer , I am enjoying your story. I was wondering when you were going to stretch the legs of those custom 300WM rifles.
That was some good pentration on the Kudu for ELD-X. What were your observations on the 2 weights and terminal performance? Short and long distance as the second shots on the Zebra were from a fair distance.(Penetration, wt retention, etc)
Click to expand...

Morning routine as usual. By this point I am finding a single slice of bacon, a fried egg and a thick slice of their homemade toast is all I require to keep me happy until lunch. I am a guy who loves bread and the homemade offerings at camp always made my day feel even more "authentic"
This morning we head out and search for Red Hartebeest, Black Wildbeest and Kudu in no particular order. After passing the healthy Springbok herds we saw nearly every morning and a bit of glassing we were able to locate a nice group of Hartebeest at about half a mile away and started making the stalk. We located several bulls in the group (none looked big to me after my dads stud!) Adab and I left my father and Erik behind due to some thinning cover between us and a lot of cautious eyes. We slowly crawled into position, and Adab pointed out a mature bull that only had his head exposed behind a bush. We got into position slowly next to the bush we had been peering over, setup the sticks in a seated position and waited there for a good 10 minutes for the bull to clear the brush. He walked out broadside at 225 yards and hit the ground where he stood when the 178gr took out his heart. He was a mature bull, nothing like my fathers, but something still to be proud of. Photos taken, loaded him up and off to look for Kudu and Blue Wildebeest. 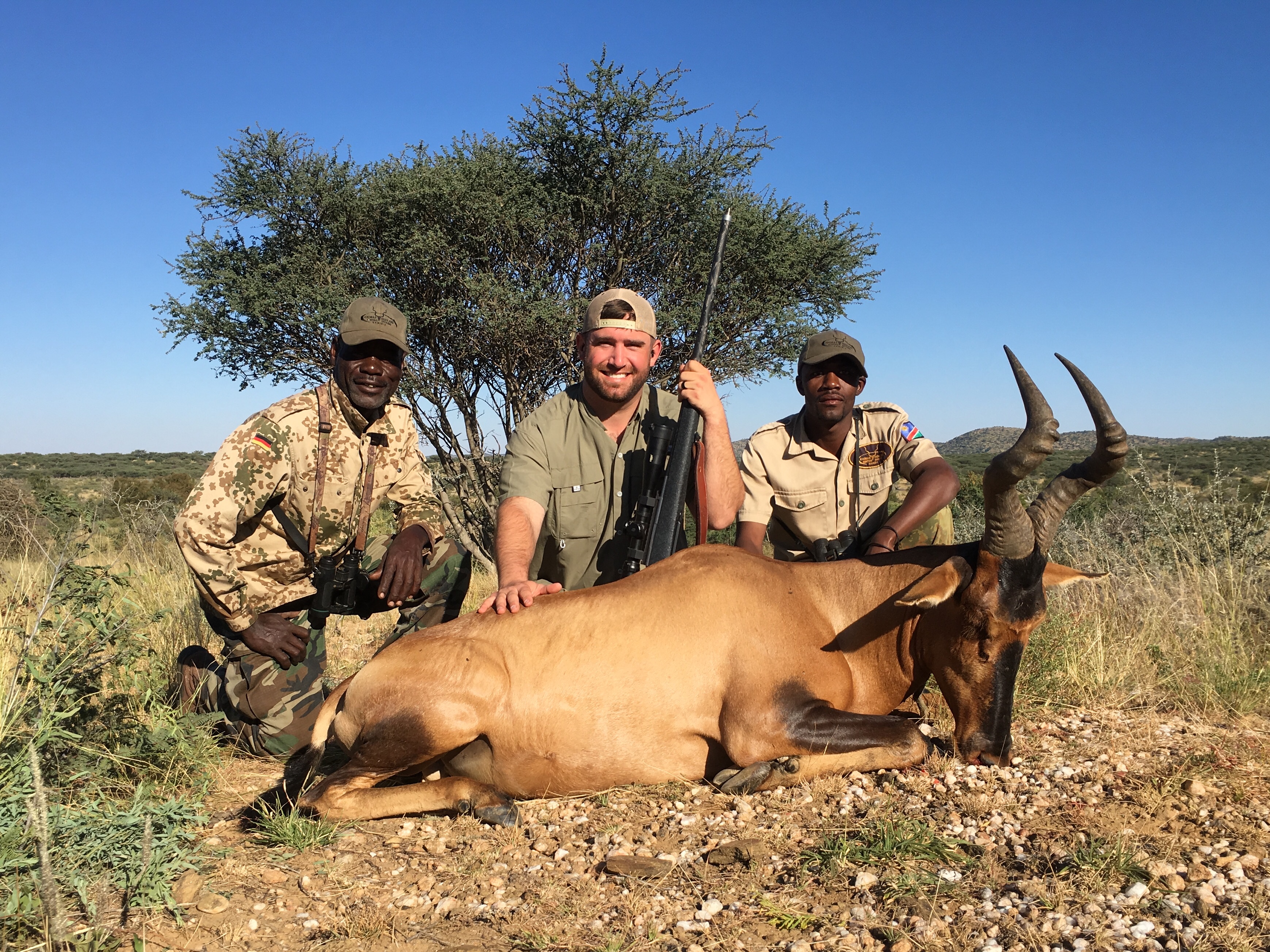 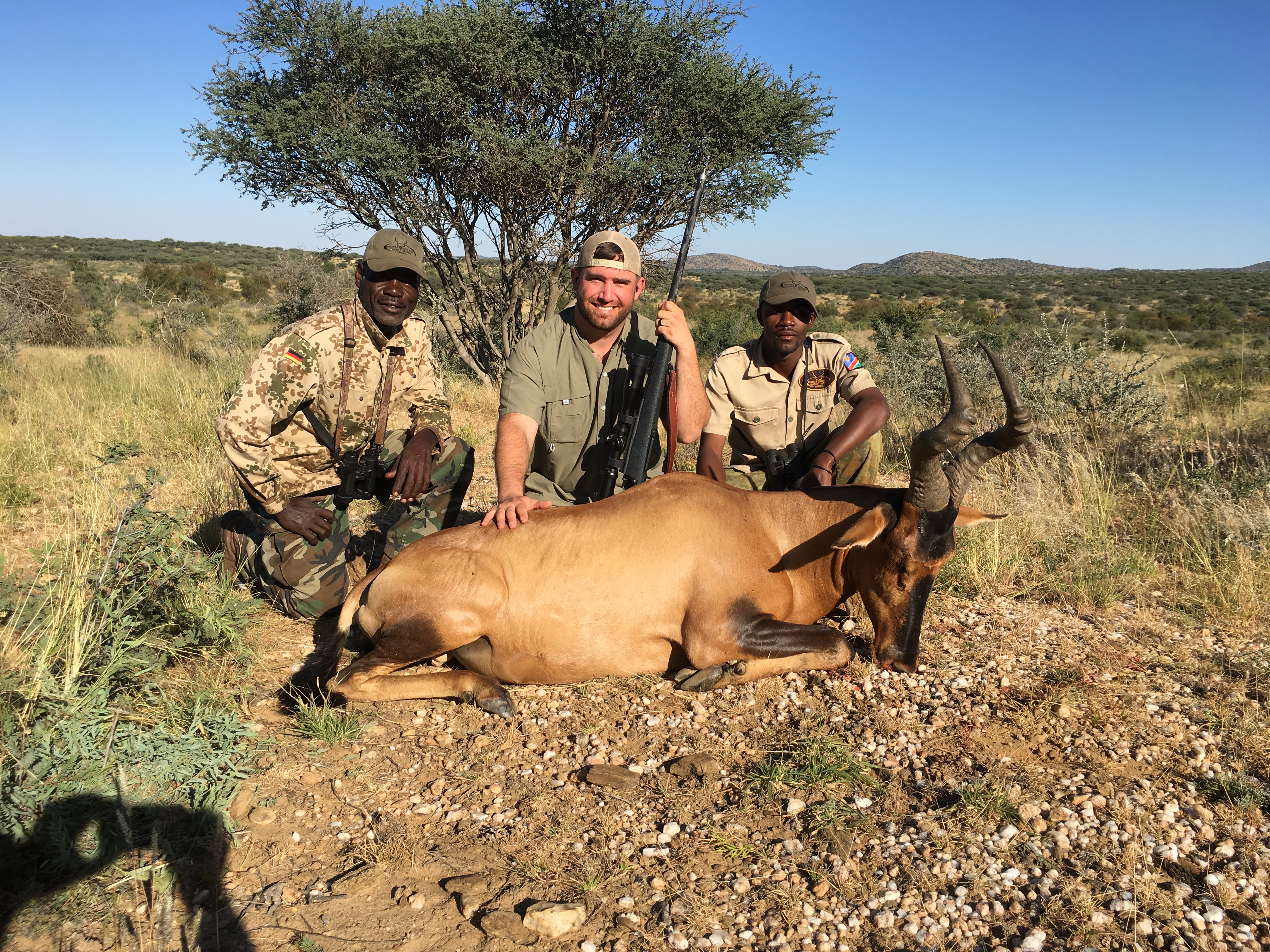 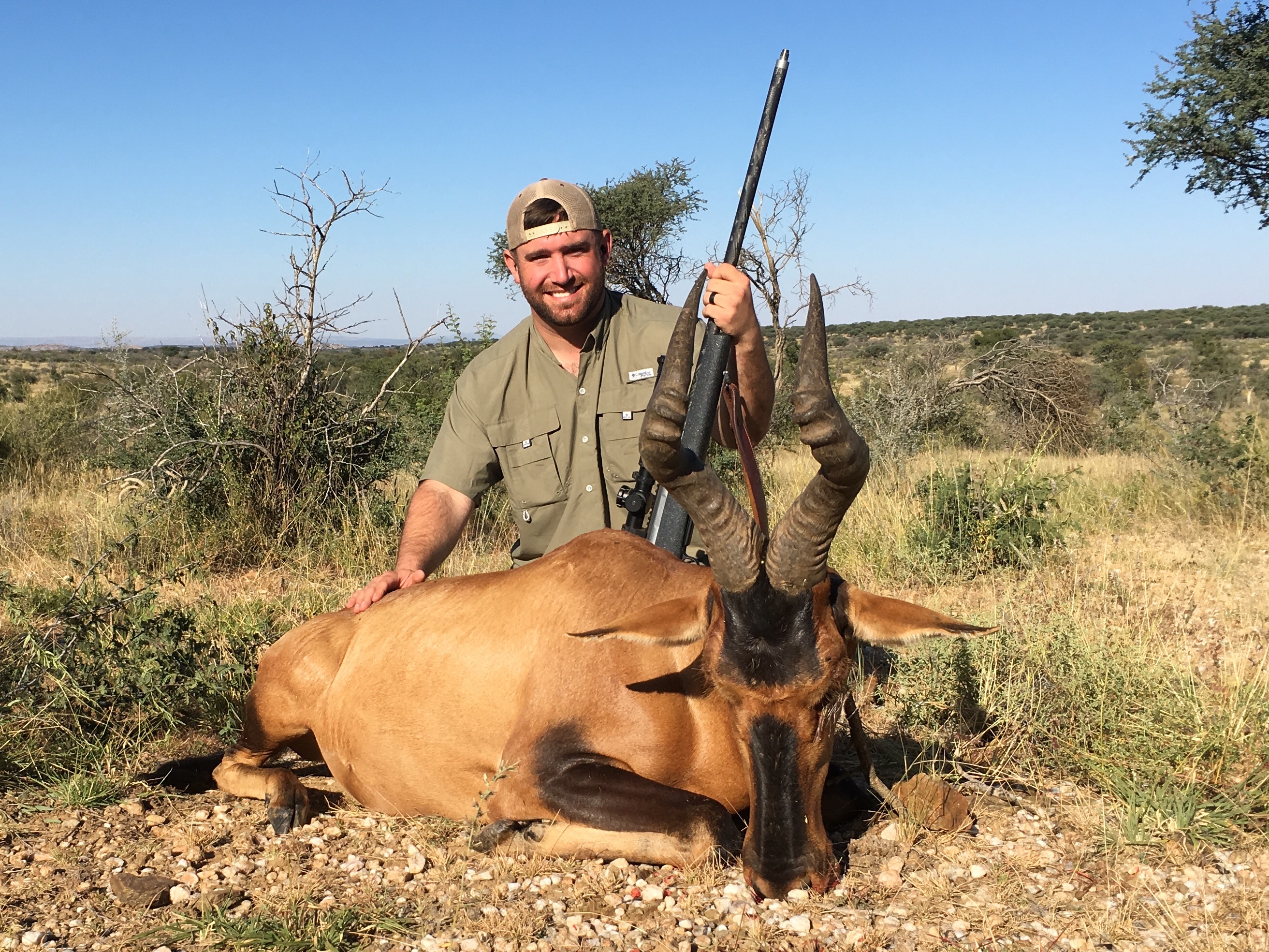 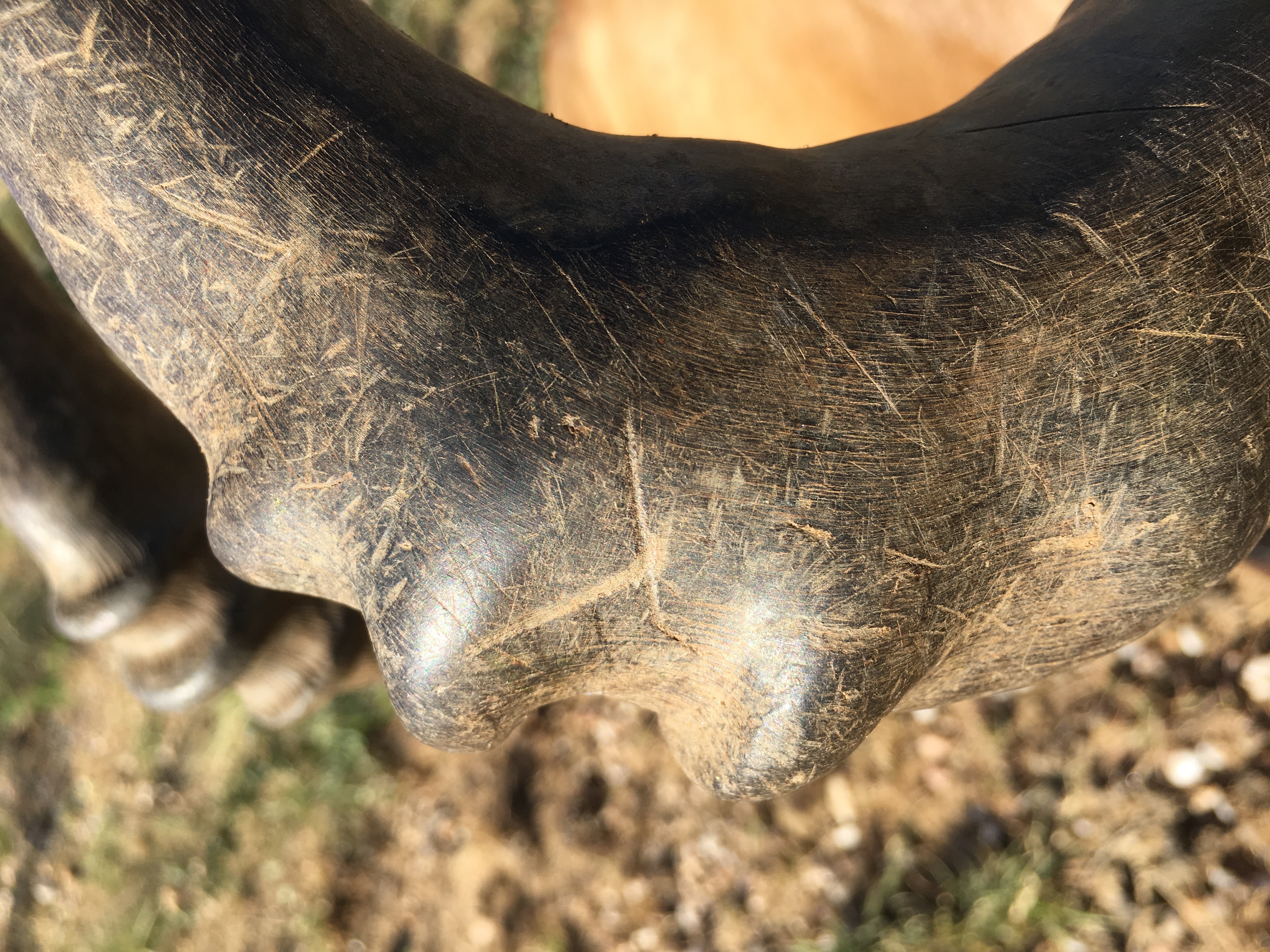 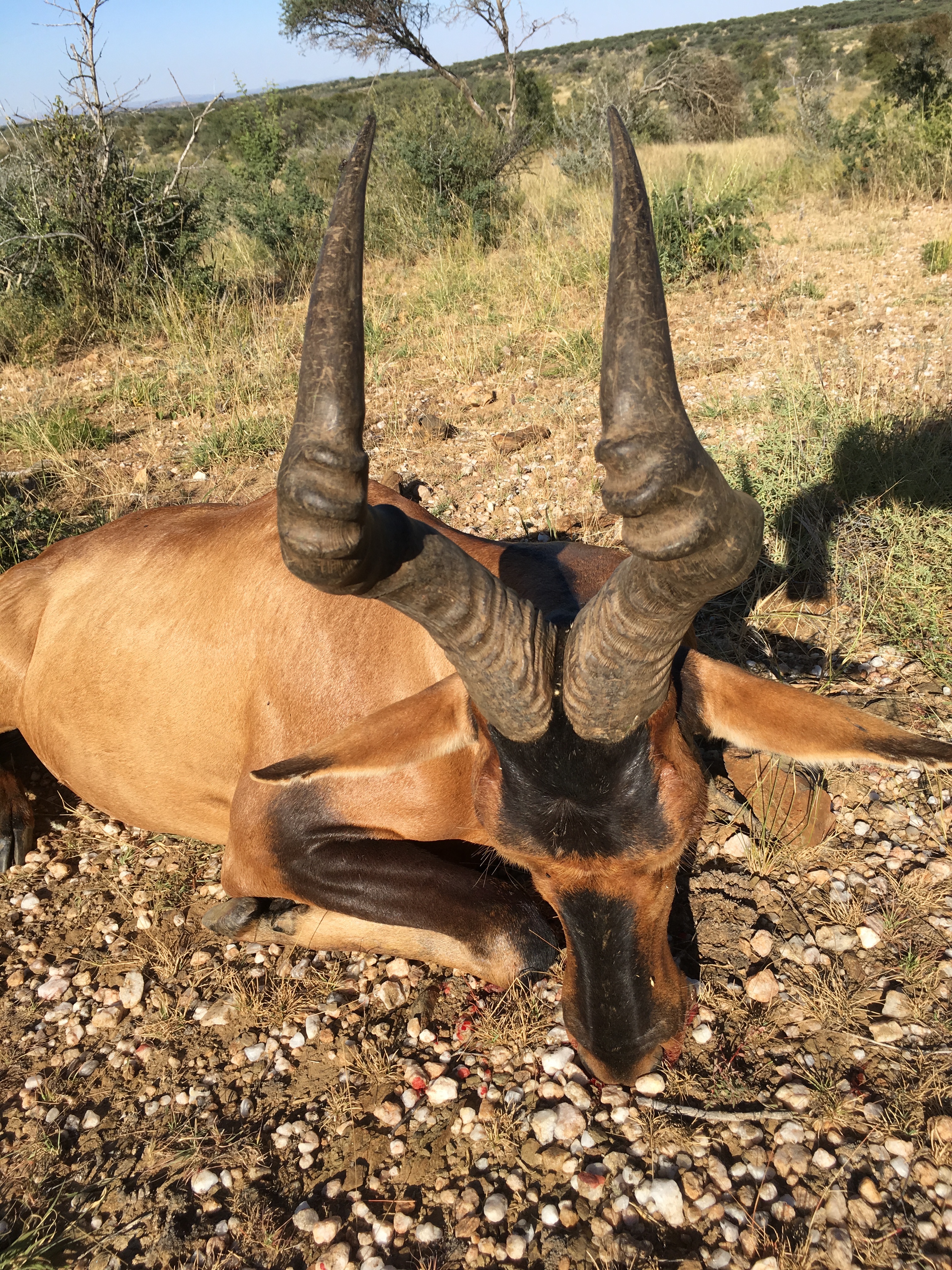 We passed a group of Kudu with a healthy 40+" bull that needed a few more years and it was time to call it a morning. Back to camp for siesta, then cake and coffee at 1530!

The evening took us to the eastern side of the property where we had taken my kudu, and a hour of glassing we located a healthy herd of Black Wildebeest. We drove to a more favorable position for the wind and stalk, got out of the Land Cruiser for a walk up a dry creek bed to the point we could get better eyes on the wildebeest. The stalk ended up being very similar to my morning hunt, just with my father and I switching spots. Erik and I had to stay low in the creek bed while my father and Adab crested the berm and made a stalk that took about 30 minutes to take a nice Blue Wildebeest bull at just over 100 yards. He went a short distance and fell over with a double lung shot. Another amazing day on the books and we still have more hunting to do! I will never get over how intense this trip was for us. Our "typical" North American hunting is days and days of work for one final moment of filling a tag, while in Namibia we had enough work to make us appreciate our animals, but it never seemed to end! So much action! 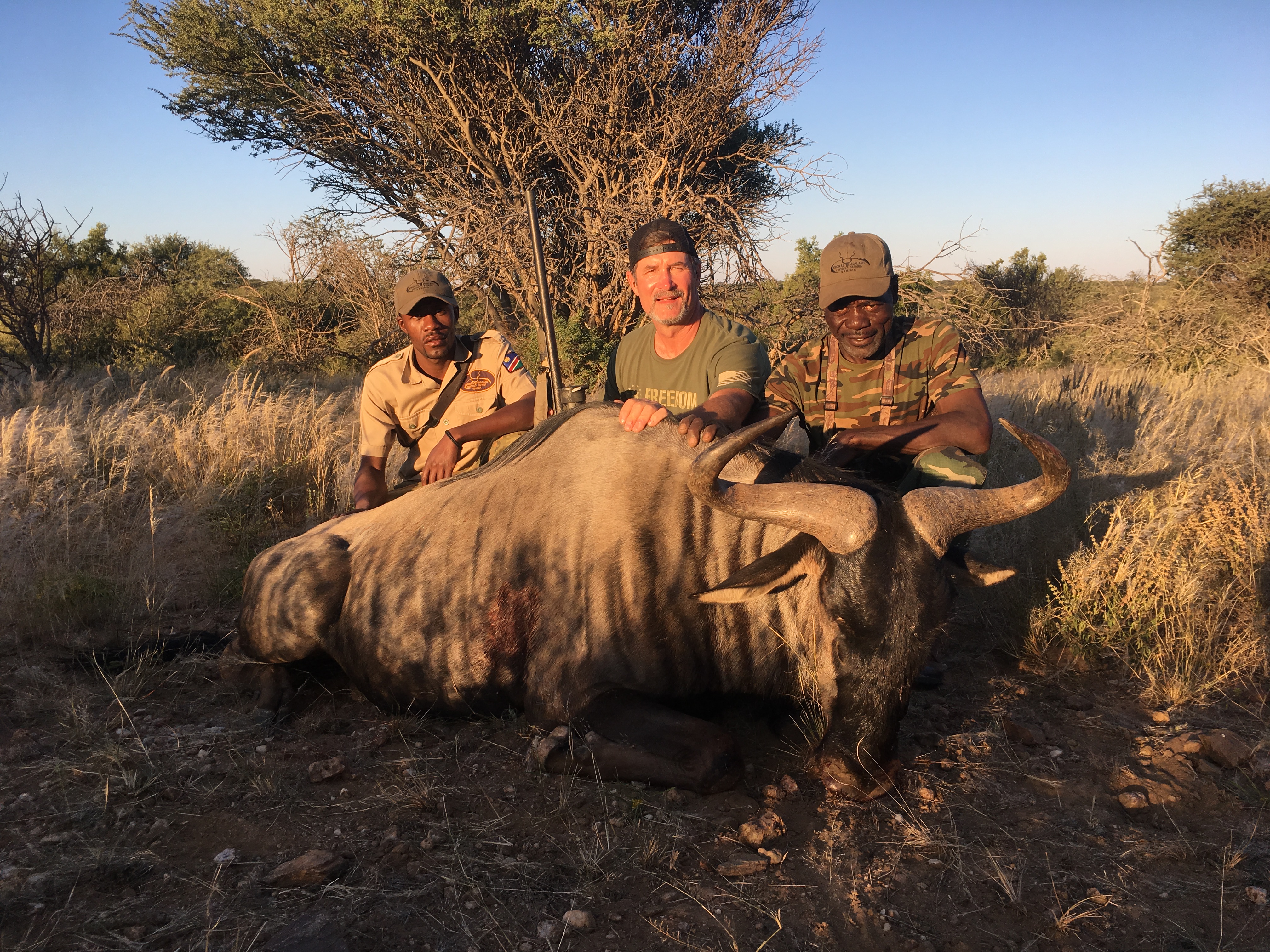 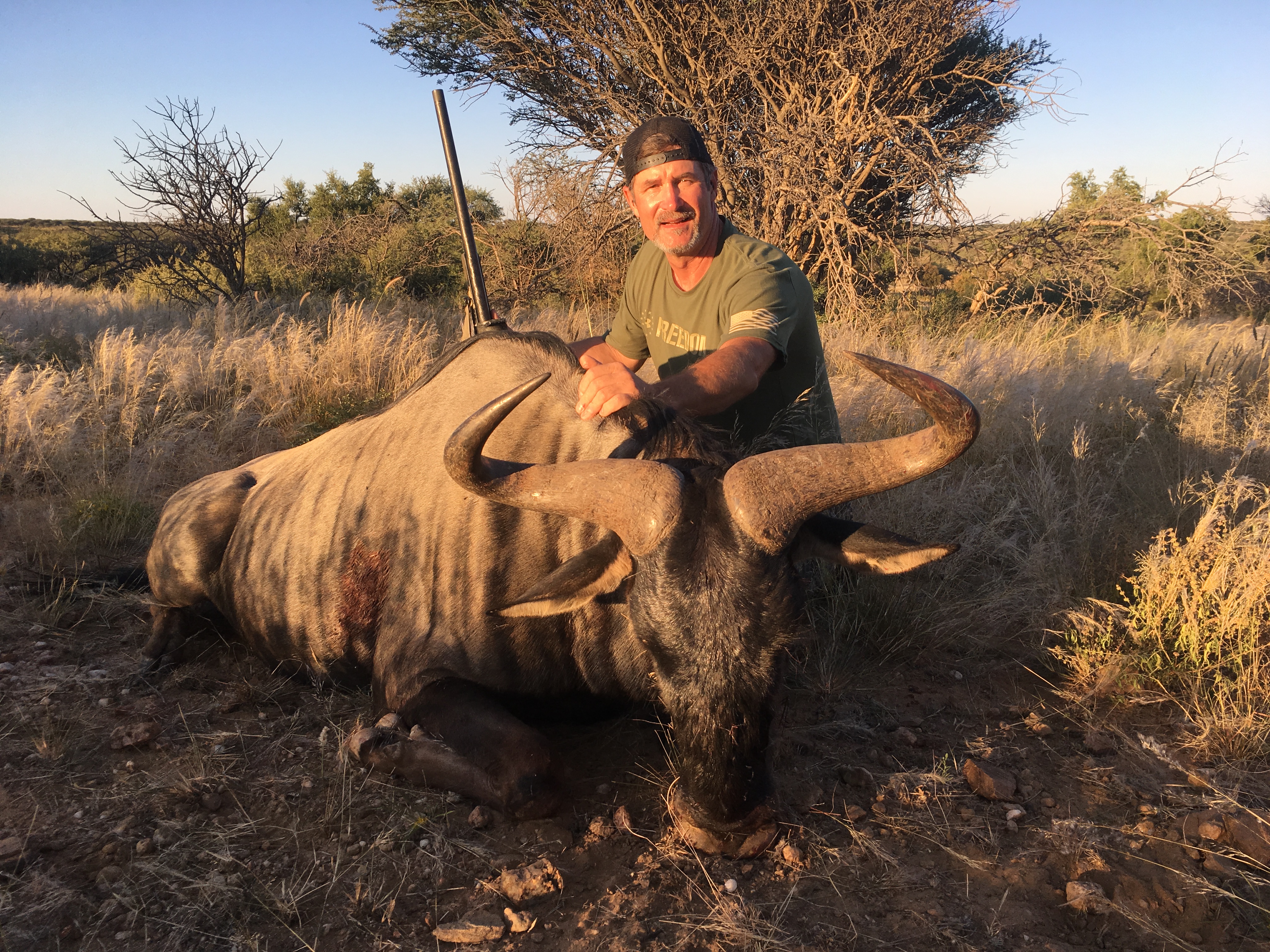 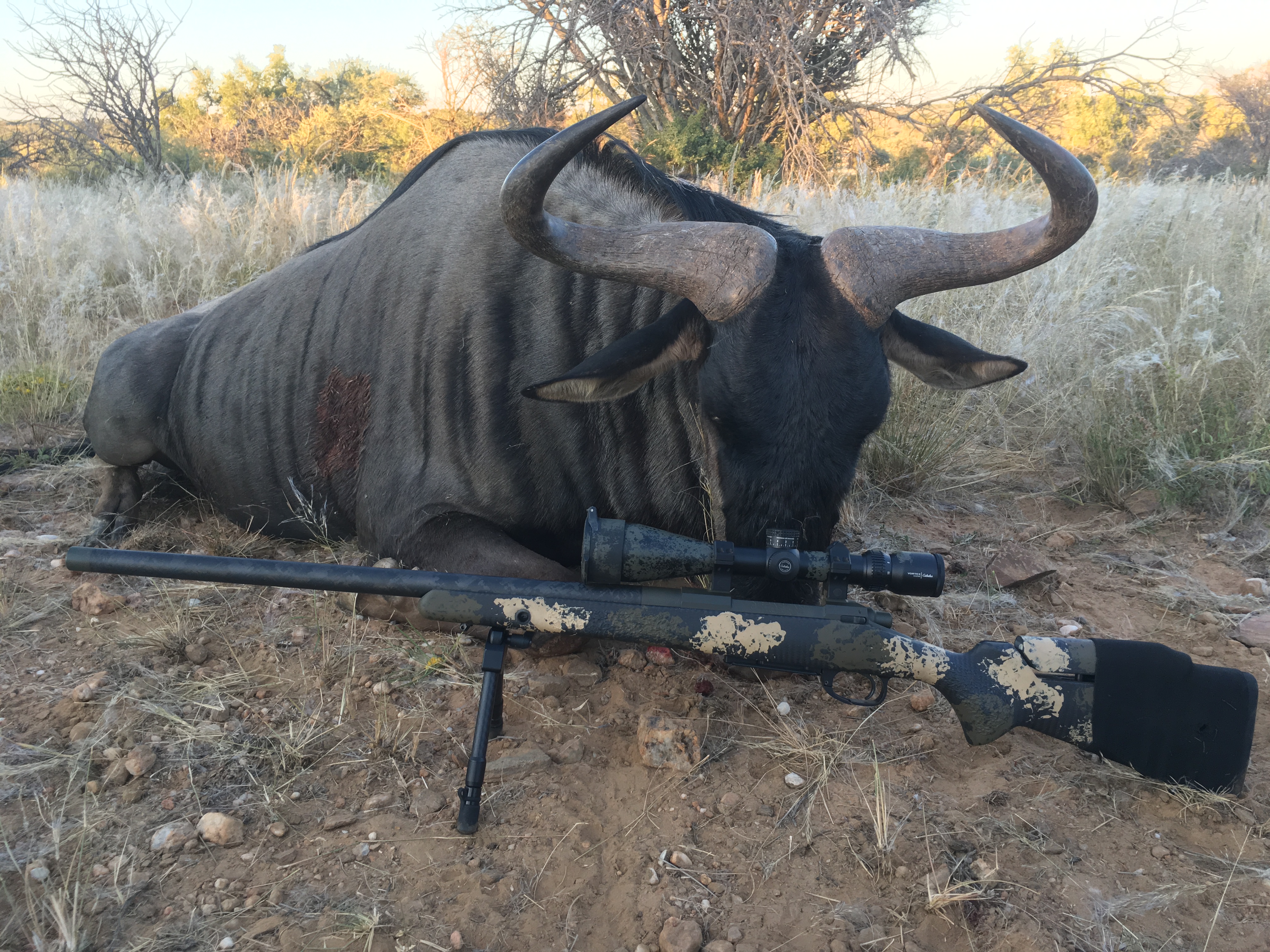 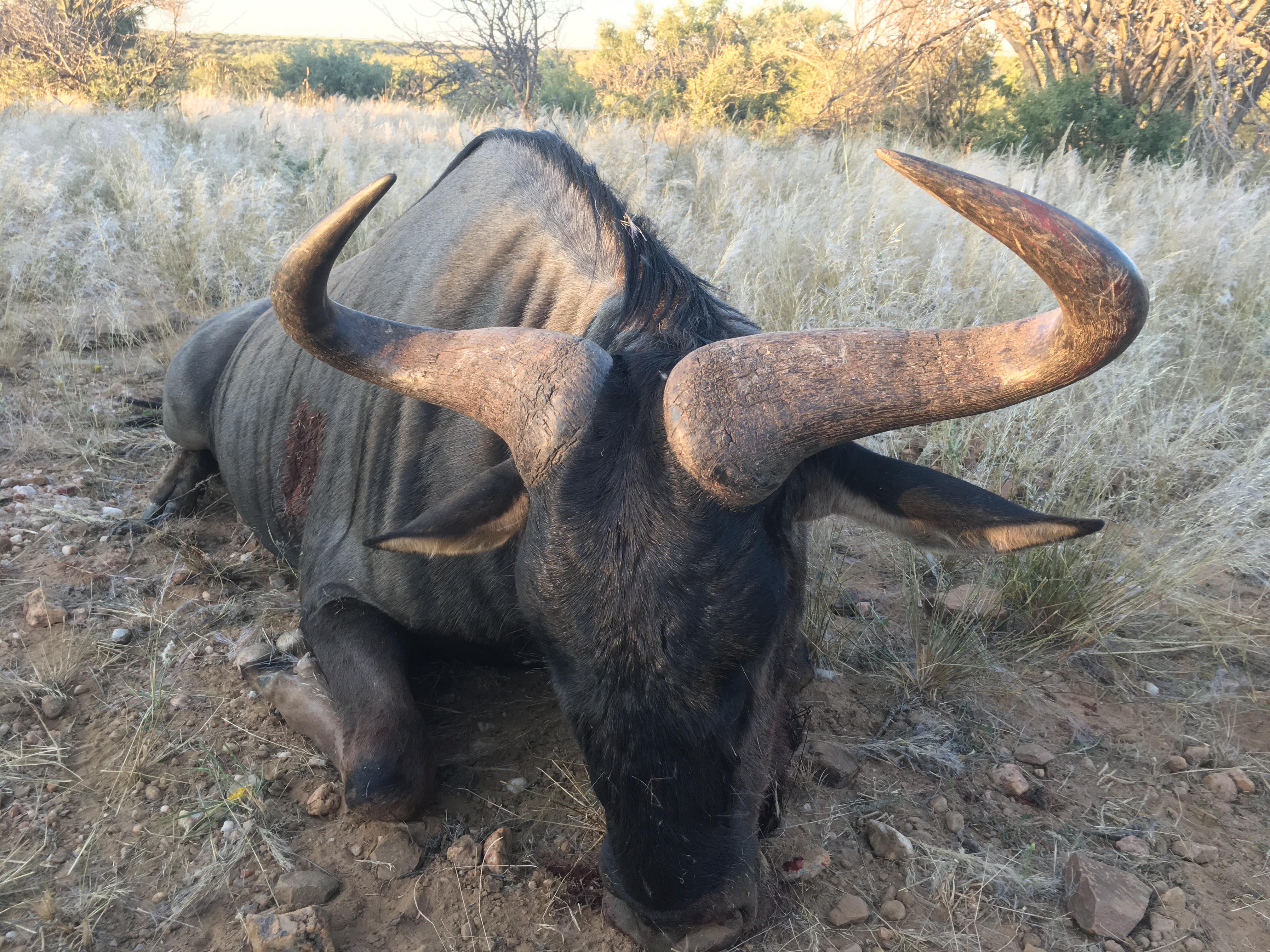 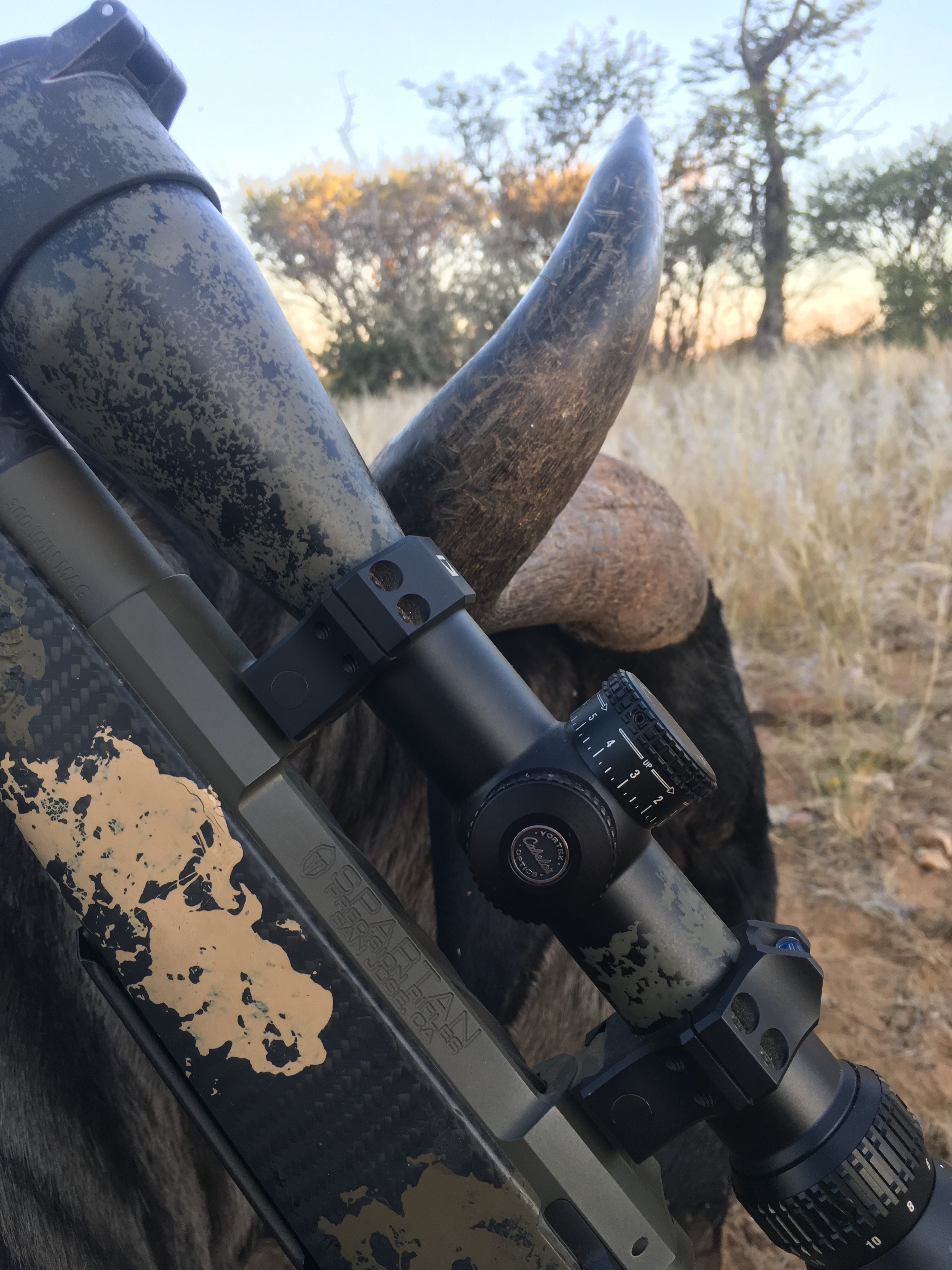 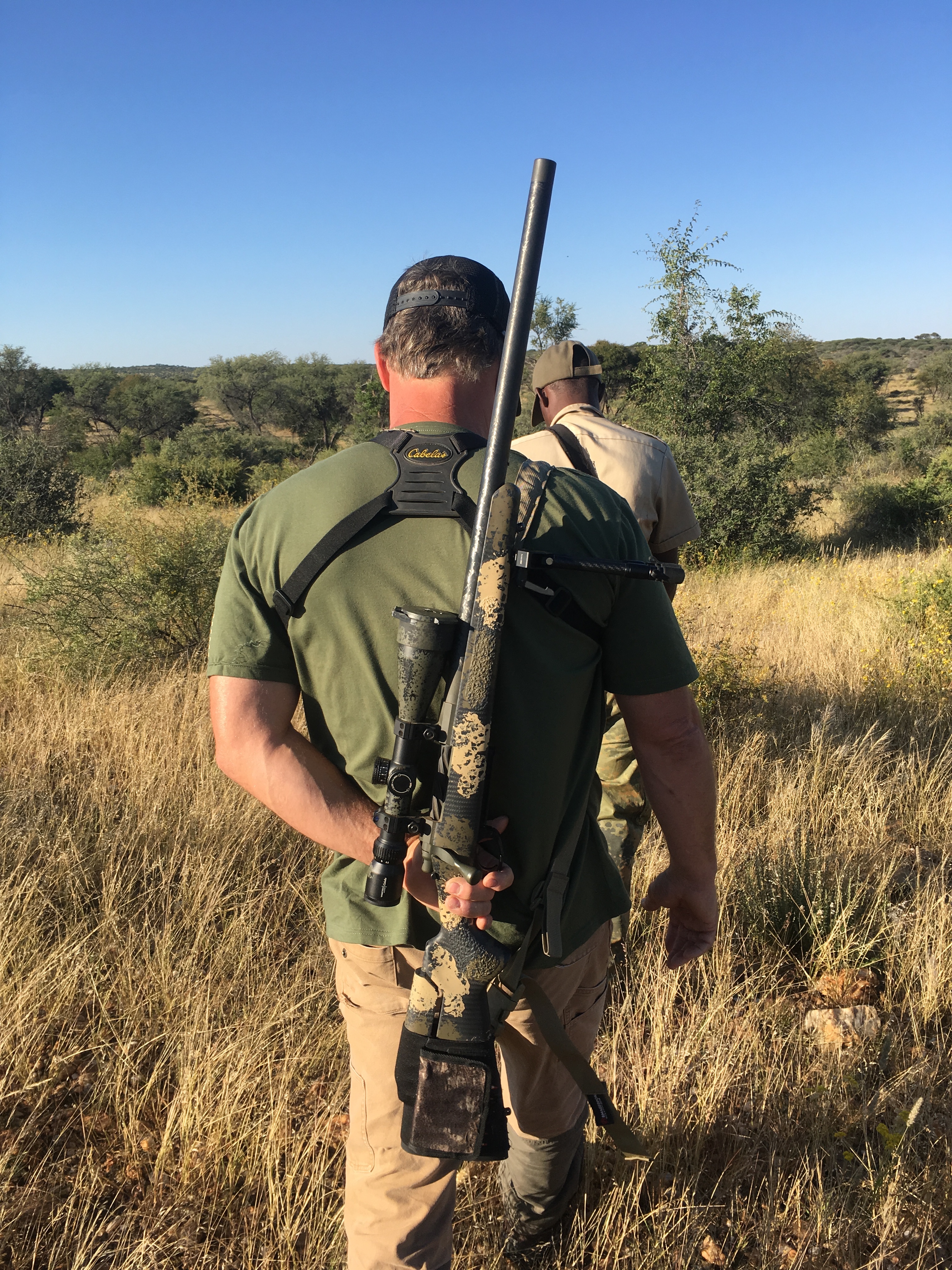 Wow, love the Kudu! Looks like a great experience for you and your father.
NO. I'm not a good shot, but I shoot often. Teddy Roosevelt

Day 6
Headed out this morning in hopes of locating a nice Kudu bull for my father. We headed back to the hills where we had harvested the zebra, and my dad had missed his first opportunity at a quality bull earlier in the trip. We stopped several times, glassing for 15min or so in each spot and ended up a nice vantage point and sat down to glass miles of hillside in quite a beautiful setting. We were so fortunate to have great weather during our time at Khomas Highlands, and this morning turned out to be as nice as every other. After some time with many different animals spotted, we located a herd of 7-8 Kudu with 3 bulls in the group. Two were a bit younger and hanging out with the cows, but even at a significant distance, we could see a mature bull with much darker horns hanging out above the group rubbing his horns in a tree. We started down the hill towards the group, and Erik heads back to the truck to start moving into a better position for pickup of *hopefully* a nice Kudu for my father.
We got into better position to truly evaluate the bull, and all agreed that it was a old male, not quite as big as mine but several years older with some great character to his horns. My dad setup for the shot, and with my rangefinder pinging at 348 yards, a quick dope adjustment was made and my dad hammered his bull! I watched the solid hit through my binoculars, and he went maybe 10 yards forward and fell behind a tree. When my dad recovered from the recoil and looked through the scope, he was a bit concerned because he could see the ass end of the group cresting the hill above where he had taken his bull and he was a bit worried his shot hadn't connected where he had placed the reticle. I assured him that it was down, and we headed towards the brush.
My dads shot had hammered both lungs with a nice frothy exit wound on the far side, and likely taken out the top end of the heart. Perfect shot!
His bull had a very unique rack that measured at 47/48" and Adab and Erik guessed he was over 12 years old, a perfect trophy! 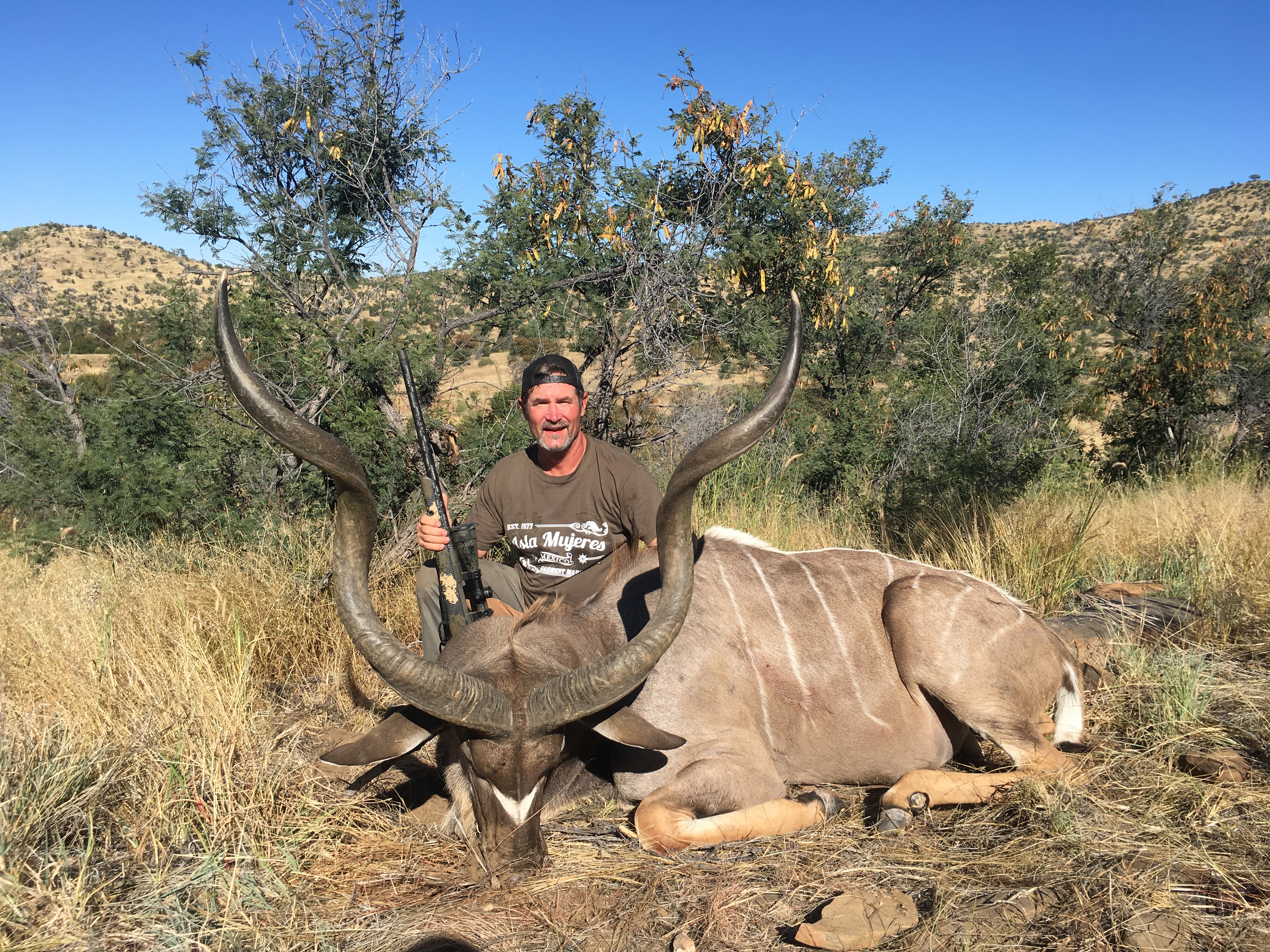 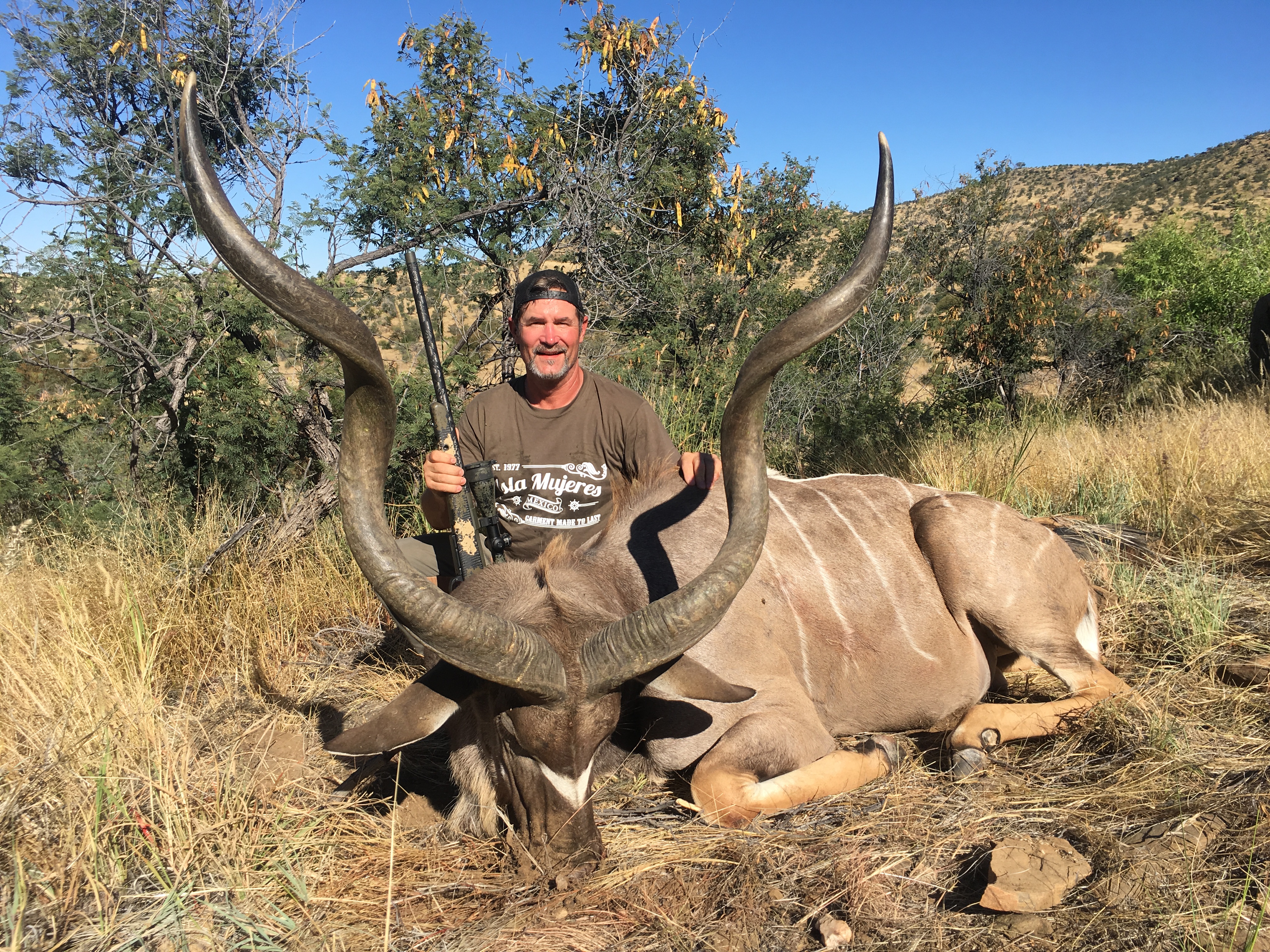 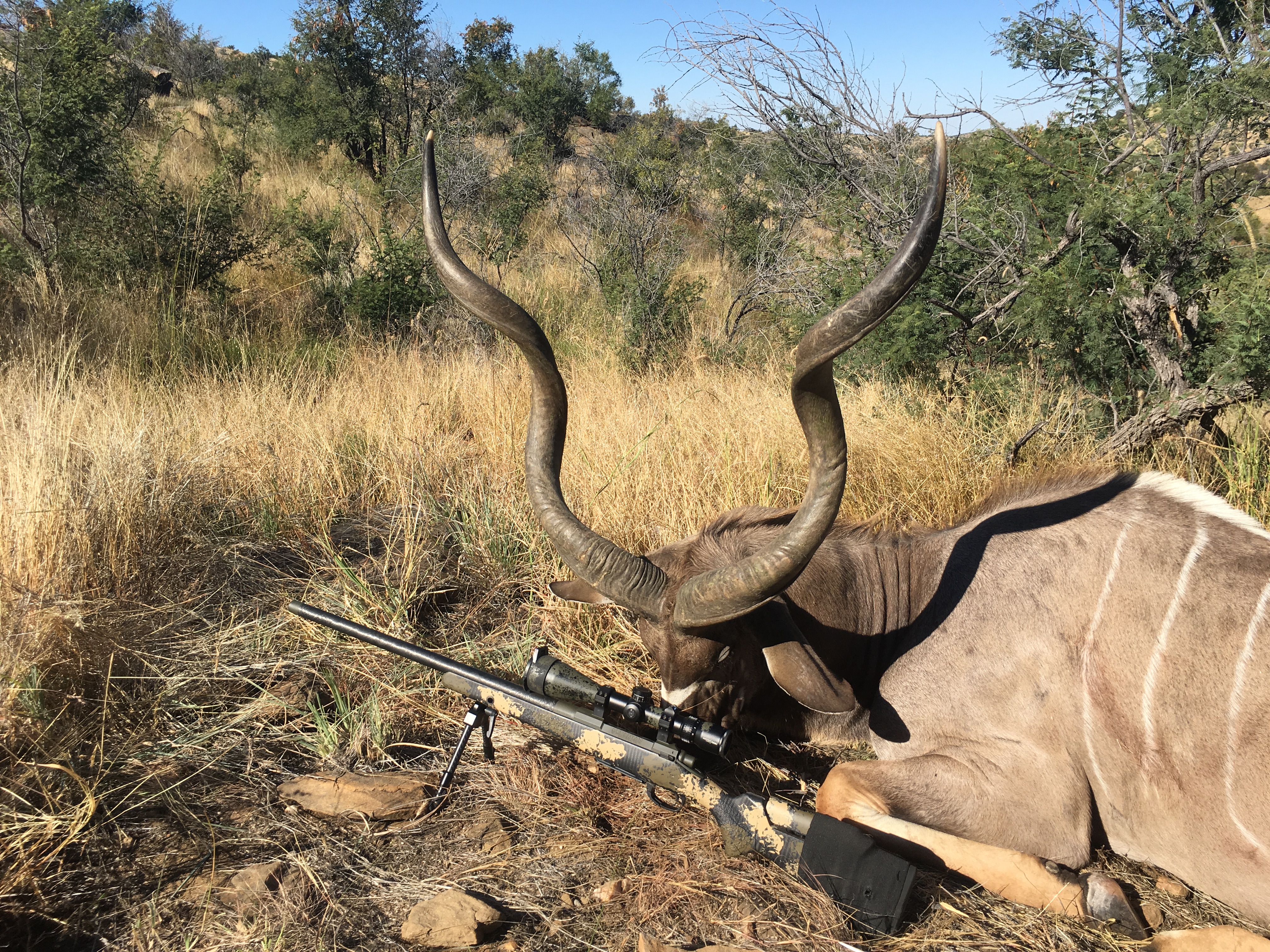 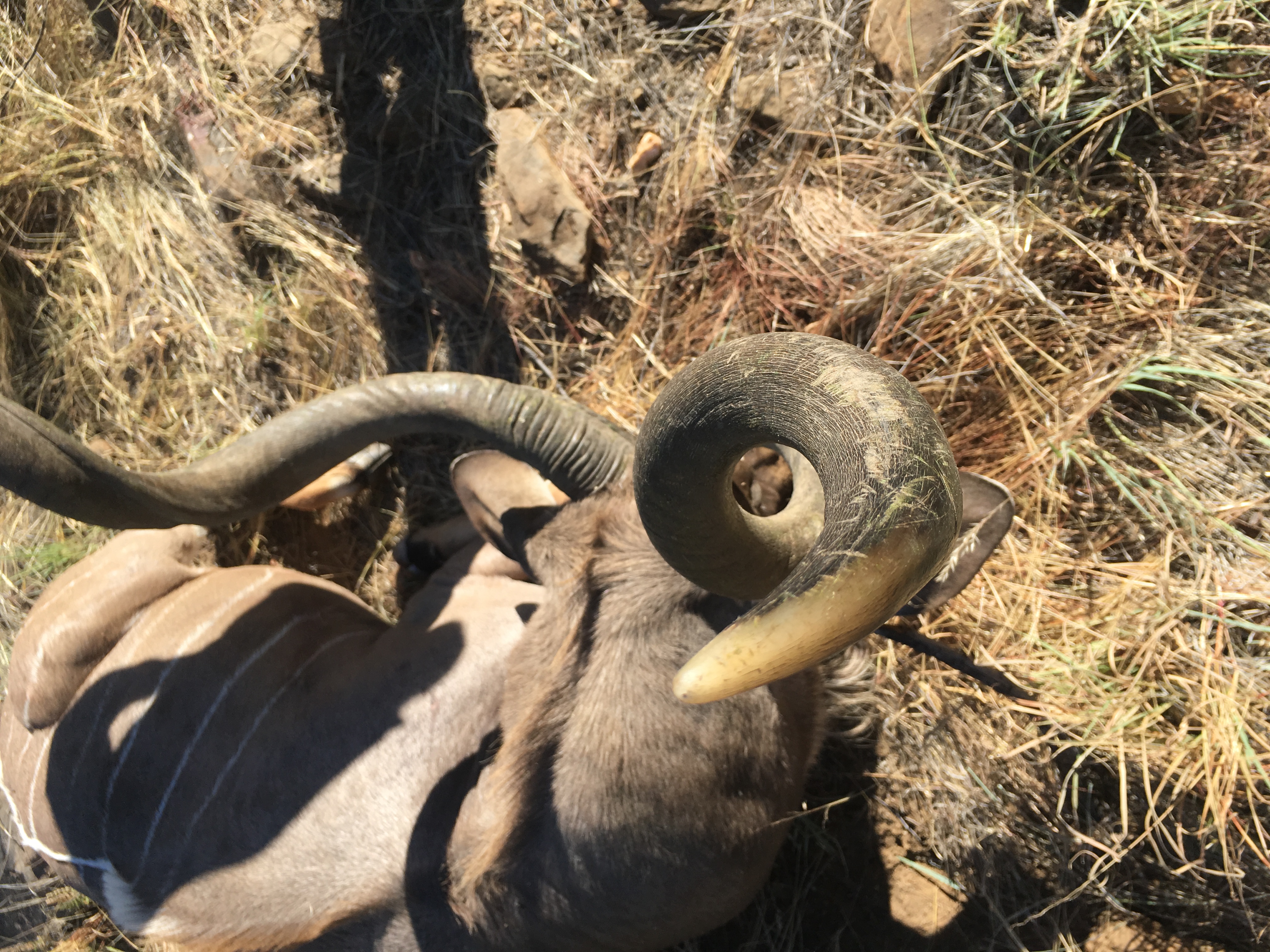 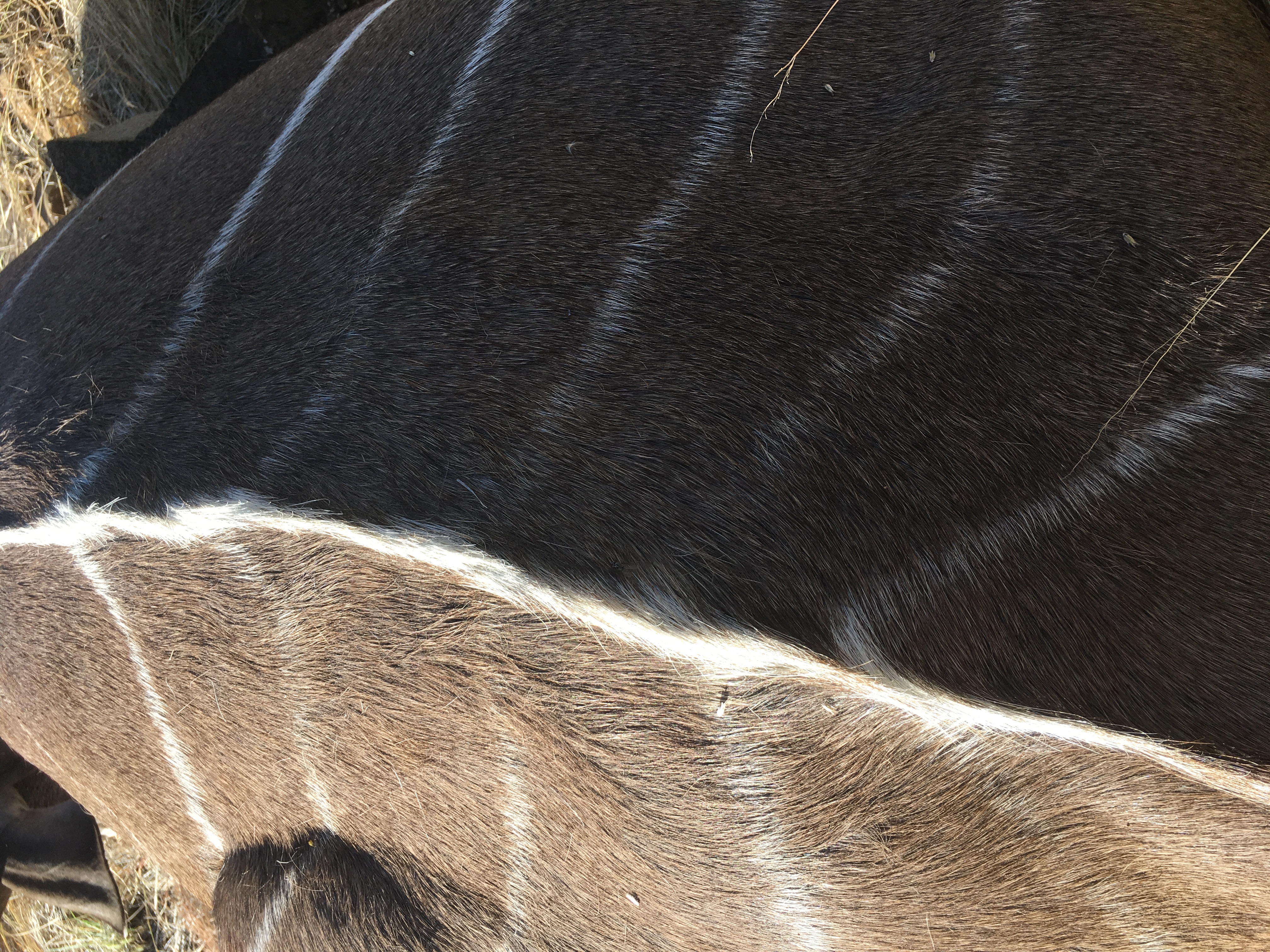 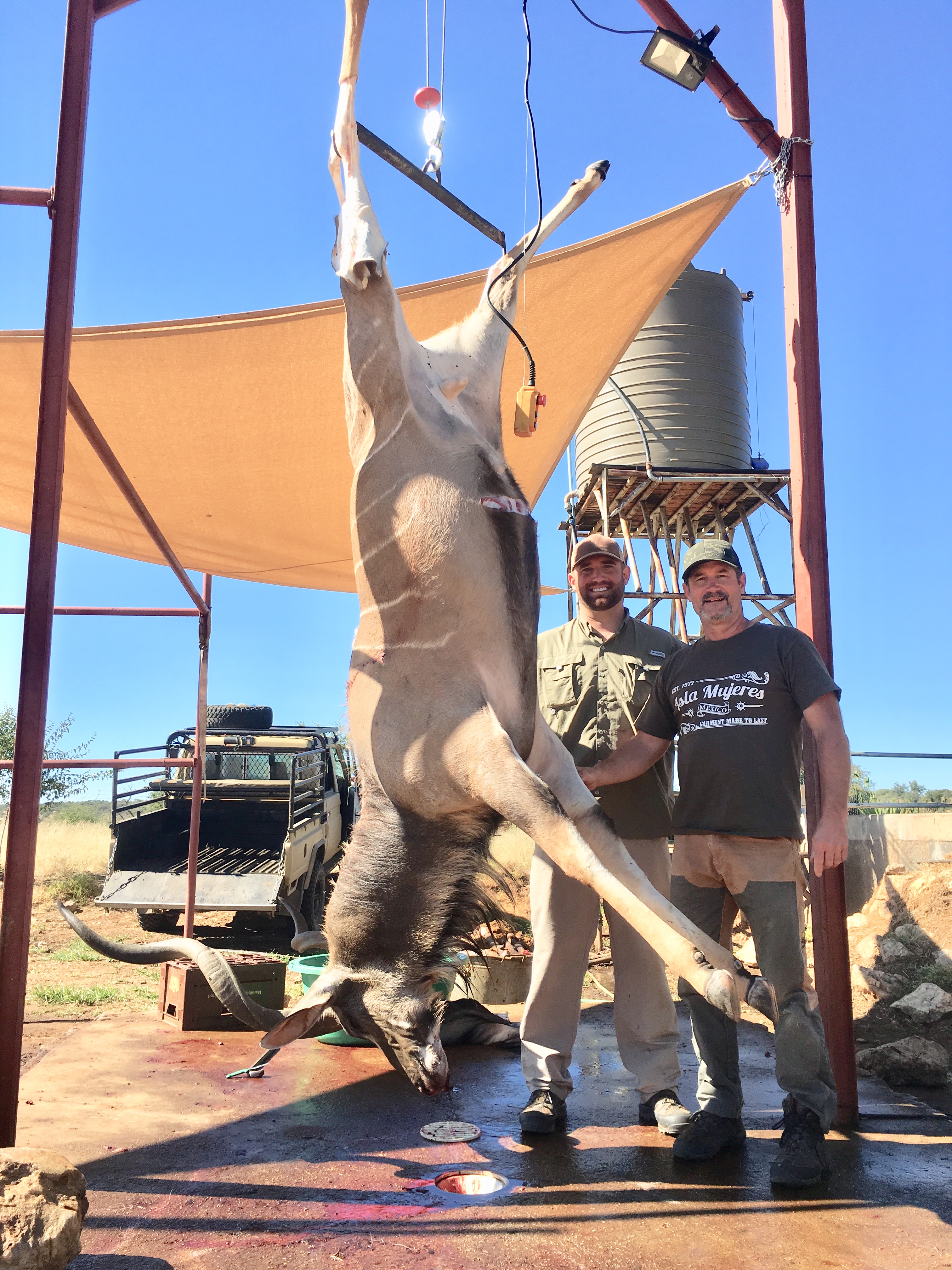 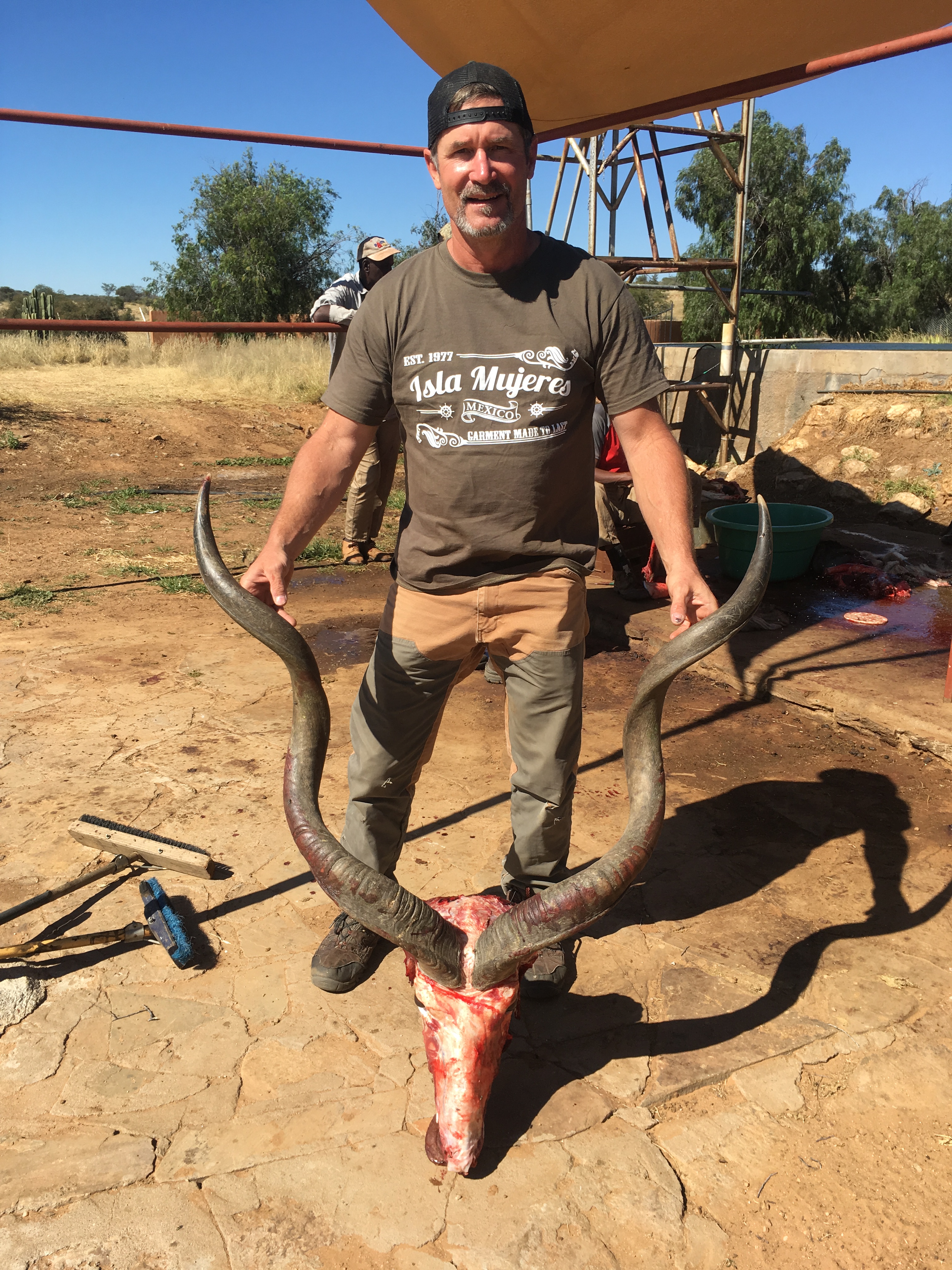 After the excitement of the morning, and with a few more days ahead of us, we decided to take the evening off and give everyone a bit of rest. We decided to walk the perimeter of a new high fence refuge Philip had just completed with some .22s in hopes of taking some guinea fowl for schnitzel but we never came across any within shooting distance in the evening. The night was great as we had grown to expect with quite a few G&Ts by the fireplace and more stories to go around. Day 6 was on the books and at this point we had already taken everything on our list! Definitely not something we had expected to do, but a testament to the amount of animals on the Khomas Highlands, as well as a great PH staff. 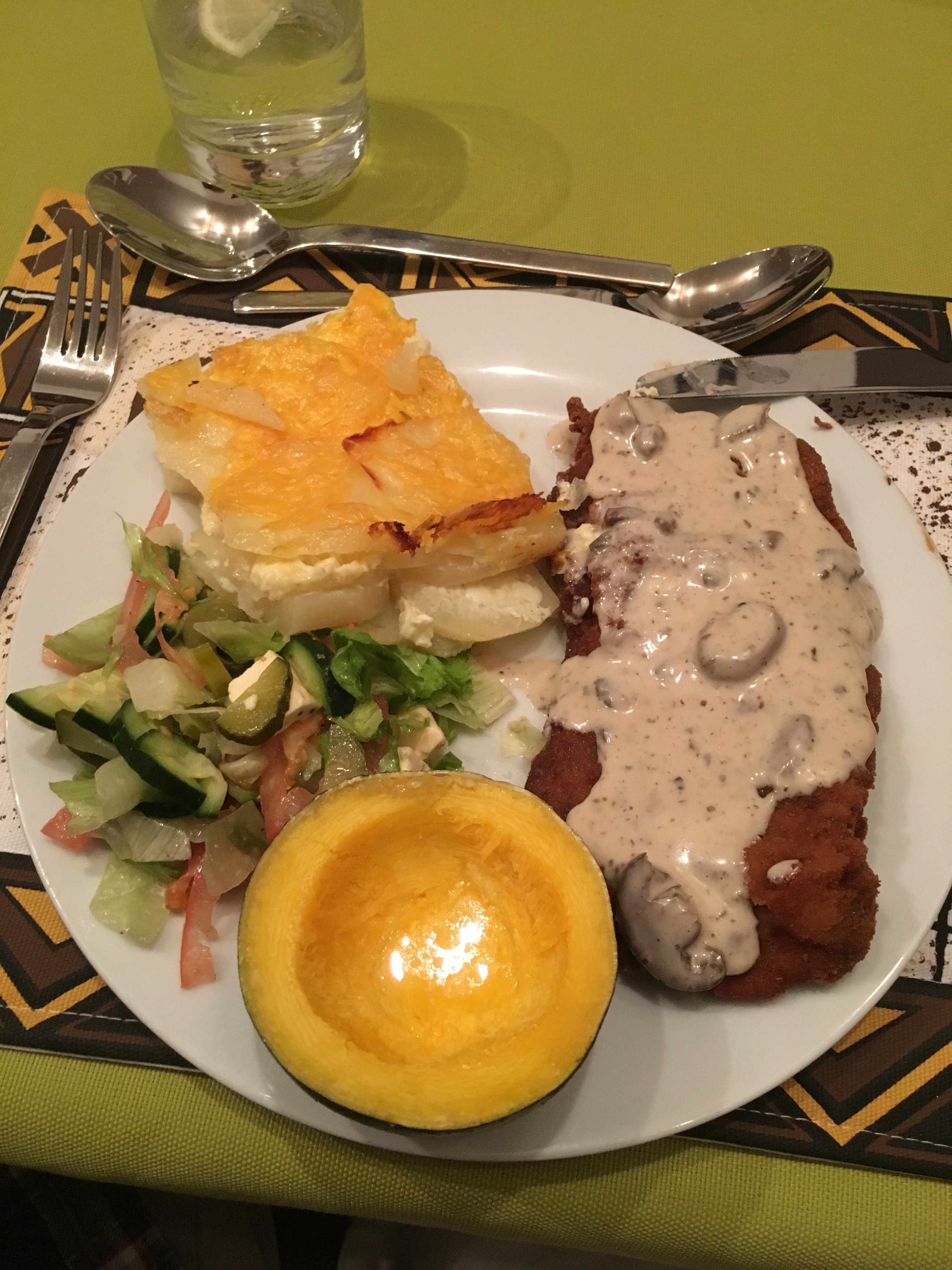 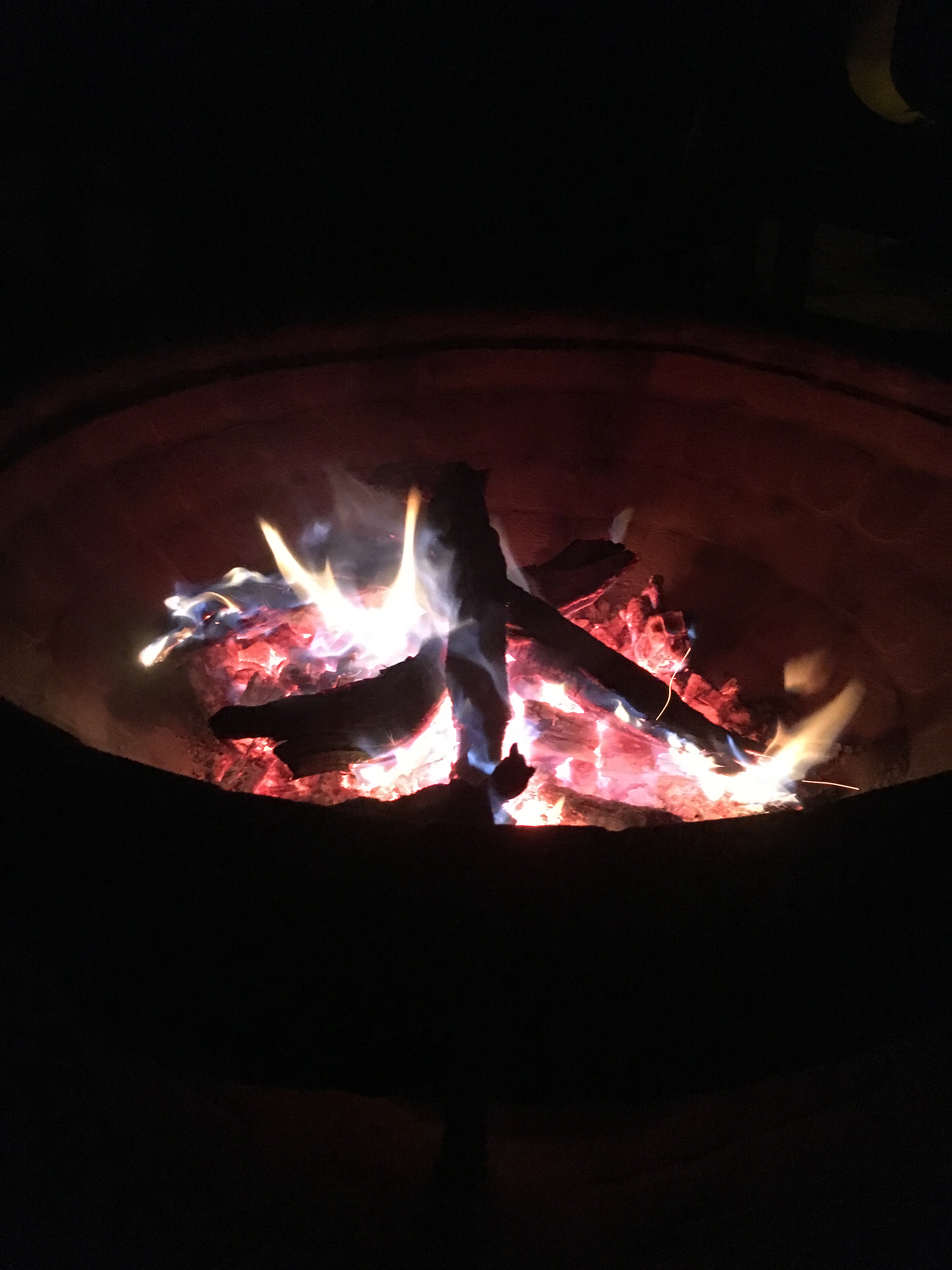 M
MichaelNix
Hi, here on the forum guys advised a cool Dating site, be sure to register - you will not REGRET it https://bit.ly/376JxTA
Yesterday at 7:58 PM •••