Hunted with GOHunt at the end of June 2019 for about a week. Animals taken were 3x warthog (rations), 2x eland, 1x gemsbok, 1x blue-wildebeest and 1x springbok. Herewith some pics and short descriptions of the hunts.

The first hunting day, shot the first warthog from the vehicle later in the afternoon. This was a shoot and not a hunt. Shot the board with the 450 Rigby 2 inches behind the shoulder to save the meat. The first time I saw a warthog get the shakes after being shot before turning and running towards the bush. We found him following a pretty clear blood trail after about 30m.

During the evening of the first hunting day, I get a message from my brother, he wants biltong and I talke to Gerrie, the owner of GOHunt, and we agree on price on a blue-wildebeest cow.

Second morning we walk into water hole, there at about 120m are 4 or 5 blues. On the sticks with the 450 and we pick one, boom goes the shot and we hear the telltale sound of a solid hit. The cow does not look well, but she is not going down. Oh crap I think to myself, a wounded blue is the last thing you want as they tend to become more healthy with more lead in them. We get on her tracks where it entered the bush and after about 15 min looking for her I spot her, try to get on her side but she trots off. I raise the rifle and look through the Aimpoint Micro H1 and the rifle goes boom and the cow goes down in a cloud of dust. I give her another shot in the head and we have biltong on the ground.

Day 3 and early morning we are on the tracks of a herd of eland. Gerrie shows me the track of a bull that had it's leg broken months ago, they have tried to get to it, but nobody could come close. The track is fresh and we stick to it, kilometer after kilometer through the thick kalahari bushveld and. Im think to myself how can this eland move so fast with a broken leg. We cross one of the roads and Gerrie hands over to Bonnie. Bonnie is fresh and I am not. Bonnie walks faster, just as we get closer the eland starts trotting again, clearly visible in it's tracks. We spook a gemsbok and then the eland. He is running, we are running... almost ! This eland must have supernatural powers... Impossible that he can move like this with broken leg! And he is not tiring... Now I am getting tired and I almost walk into Bonnie while he is busy putting up the sticks. There 60 m in front of us is the eland. He is not sure how to stand and rest on 3 legs. The right front leg is sore and probably stiff from all the walking and running. Boom goes the 450 and 550gr Woodleighs enters on the ribcage on the angle. We walk forward after the shot and find the eland stone-dead 10m further on from where it tried to stand under a "haakbos". We call in the vehicle, we load it up and down a liter of water in n time. Getting back to the lodge I try and work out the distance... about 10km... not bad for a morning workout. The meat of this eland stayed on the far as it was a management bull.

The hoove of the broken leg... clearly can see the effect of dragging over the sand for months

Day 4 and while driving out a gemsbok gives us a chance and boom goes the 450 yet again. The gemsbok is found like on the photo 30m further. Through and through on the broadside shot. That afternoon both my sons take their first "big" animals. The youngest of the two takes a good old boar while the eldest takes a young springbok ram. Both are very excited and in the excitement I totally forget about the bloodstripes on the cheeks to "welcome" them. Next time then ! 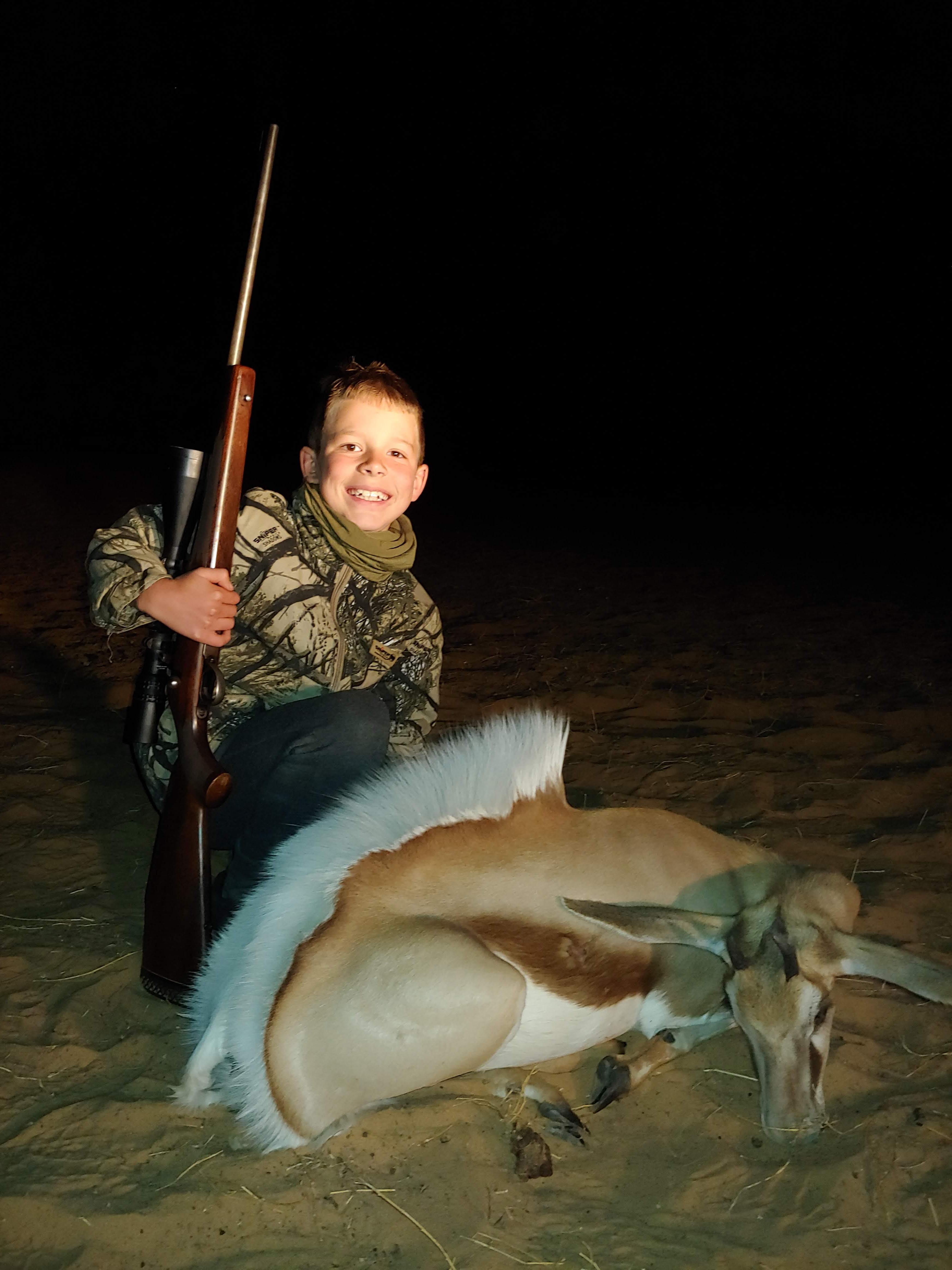 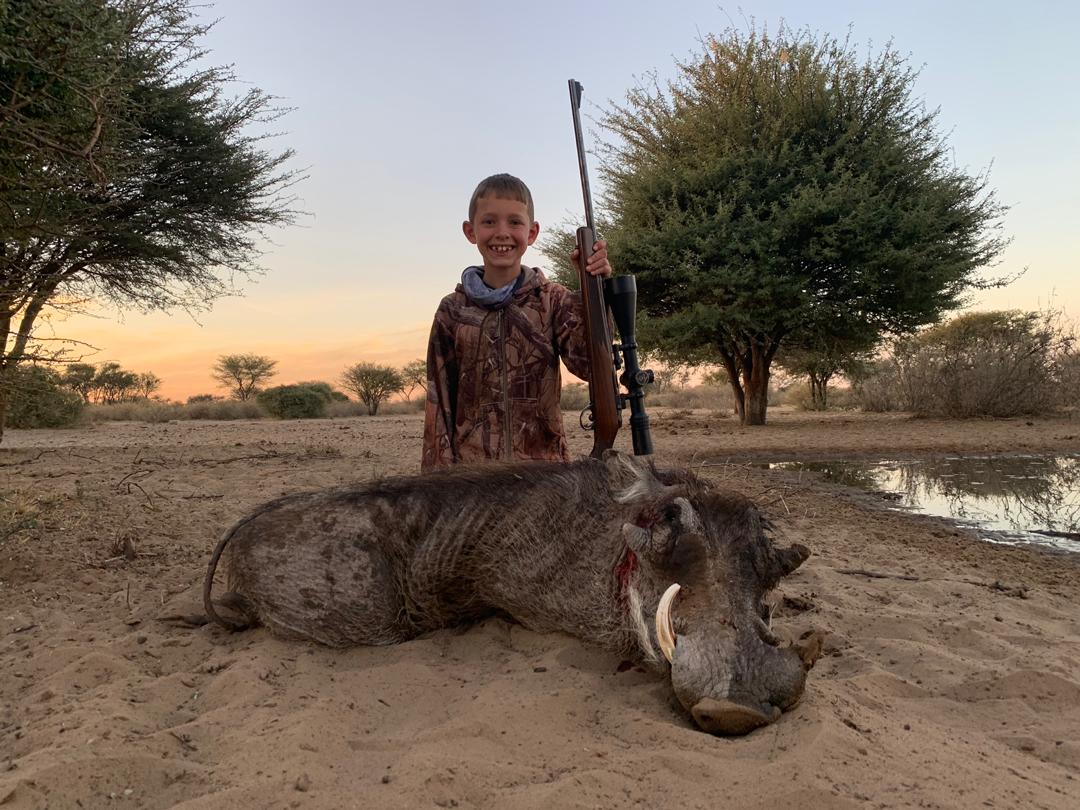 Day 5 and we are looking for one more eland for myself. We pick up fresh track and dung around a watering hole. We go and follow the tracks, "we will be back in 5 mins" we say to the rest of the gang on the truck. We start walking and like bloodhounds we stay on the tracks of the 4 eland. First 500m, the 1,000m followid by 1,500m and so forth. After about 7,000m we stop... Gerrie looks ahead into a patch of sand yellow-wood trees (Sand geelhoute). He raises his binos and aks me doesnt that particular spot not look like the behind of an eland bedded down? I raise mine and I concur. Now to get a shot... Standing over the shooting sticks is problematic due to many branches, sitting down and you have too much grass in line of sight. We need something in between. Gerrie lies down on his side, I place the rifle on his hip (I am not really sure how we managed this all), in the meantime the eland stood up and he is facing us and looking at thi strange contortionist show... Boom goes the 450 ! How was the shot? I am not sure, I think it might be a bit too high. I didnt hear the "wack" ! Me neither... Maybe it was too close and too dense to hear the "wack" properly. let's go and look. Getting to the spot where the eland once stood, we could see deep holes where his hooves dug in when jumping away after the shot. Then the first drop of blood, then more blood and as we followed the running tracks, the blood started to wash away my fears of a bad shot. And then we saw him, down on his side and finished and the 450 was silent for the rest of trip.

We shot another warthog of the truck for rations, and old boar that learned that the oats under irrigation close to the homestead was far more enjoyable and easily obtainable than the roots of plants !

Boys will be boys...

My eldest with the eyeballs from the blue wildebeest and a chameleon we found in the veld when we loaded the last eland... We released him safely into a tree after the photo 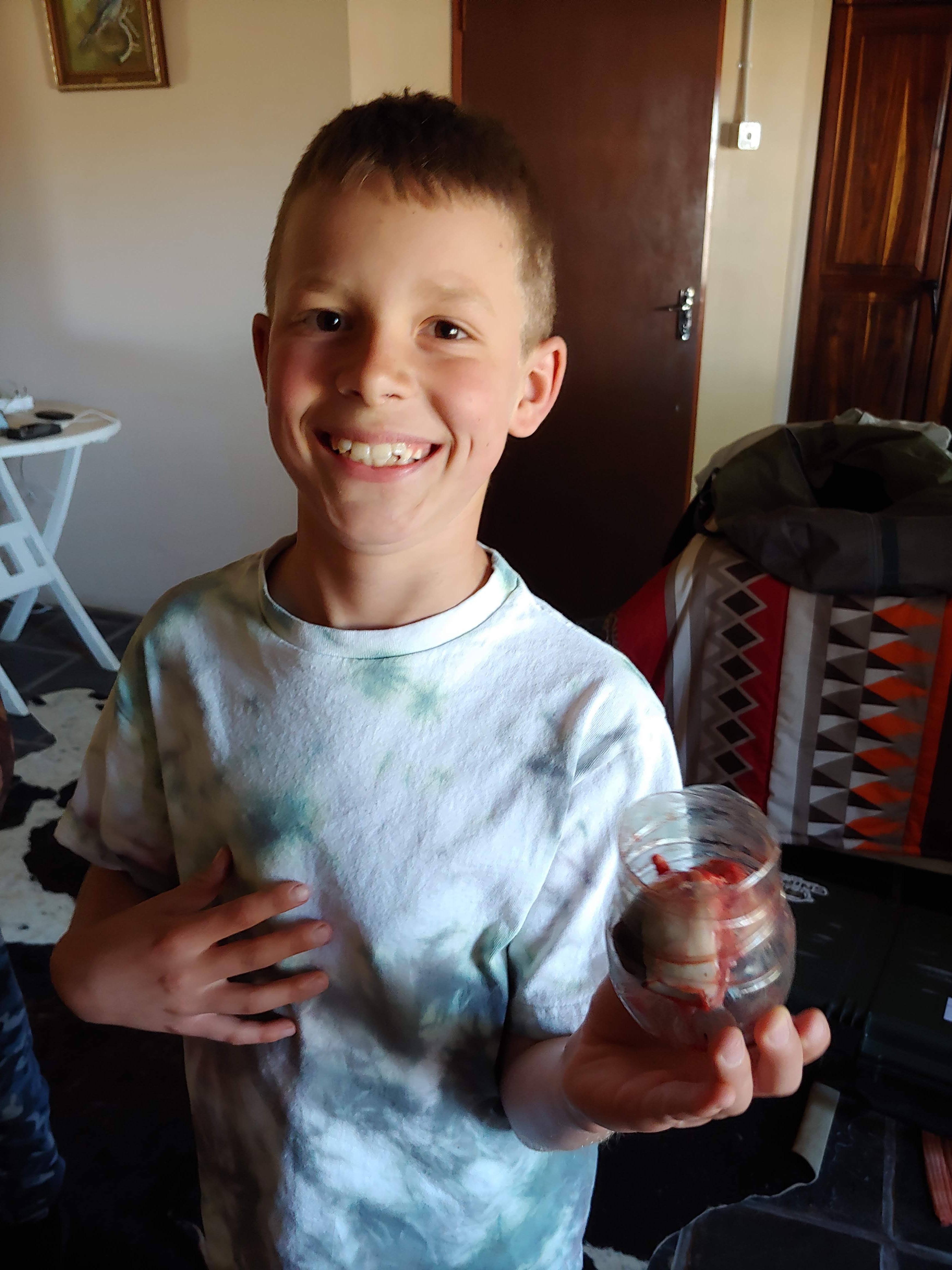 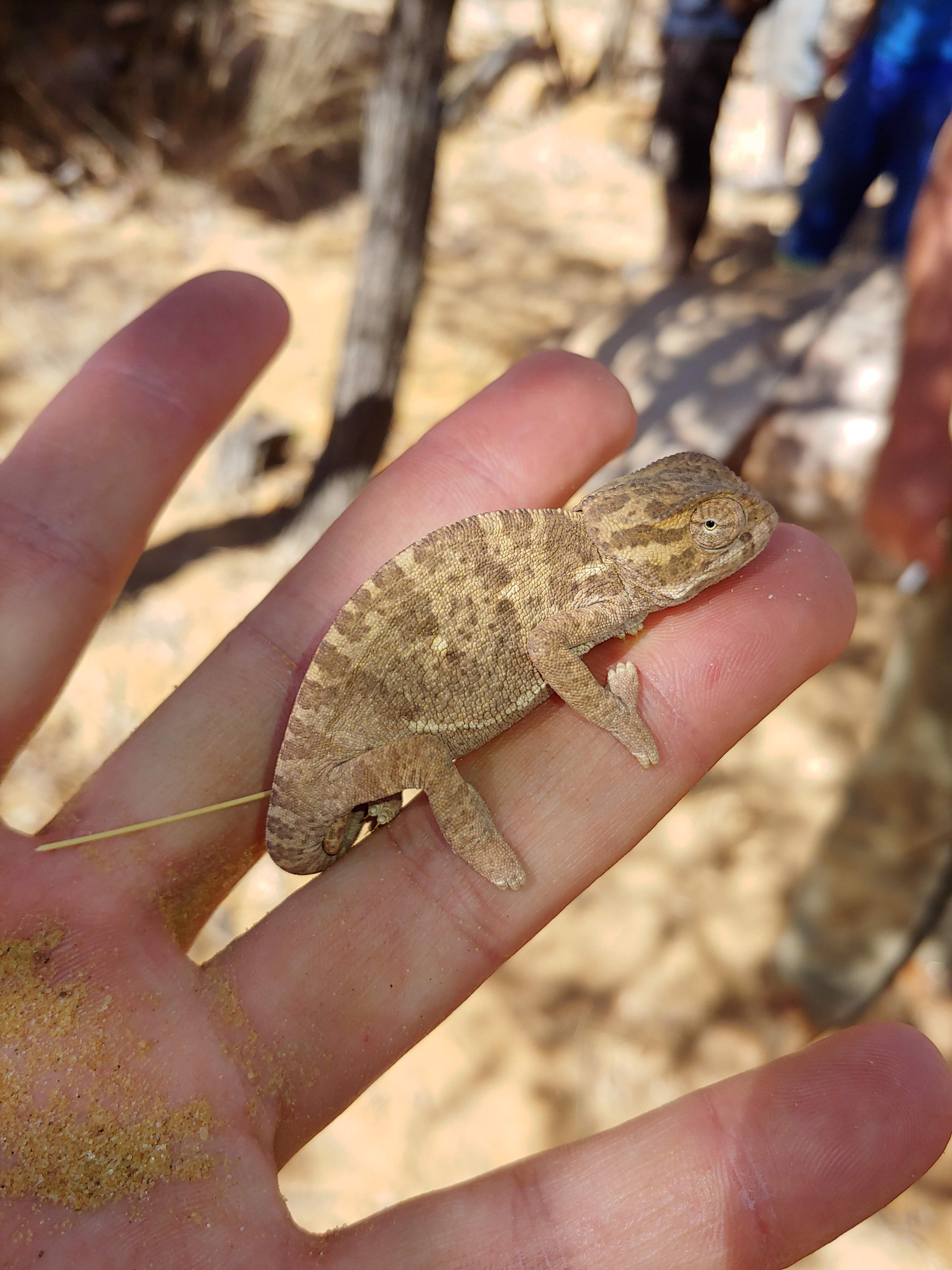 What a marvelous adventure.

Great report and thanks for posting, congrats to your boys. They are starting out on the right foot.

I forgot the add the pic of the gemsbok...

Looks like a wonderful time..way to go dad!
You must log in or register to reply here.