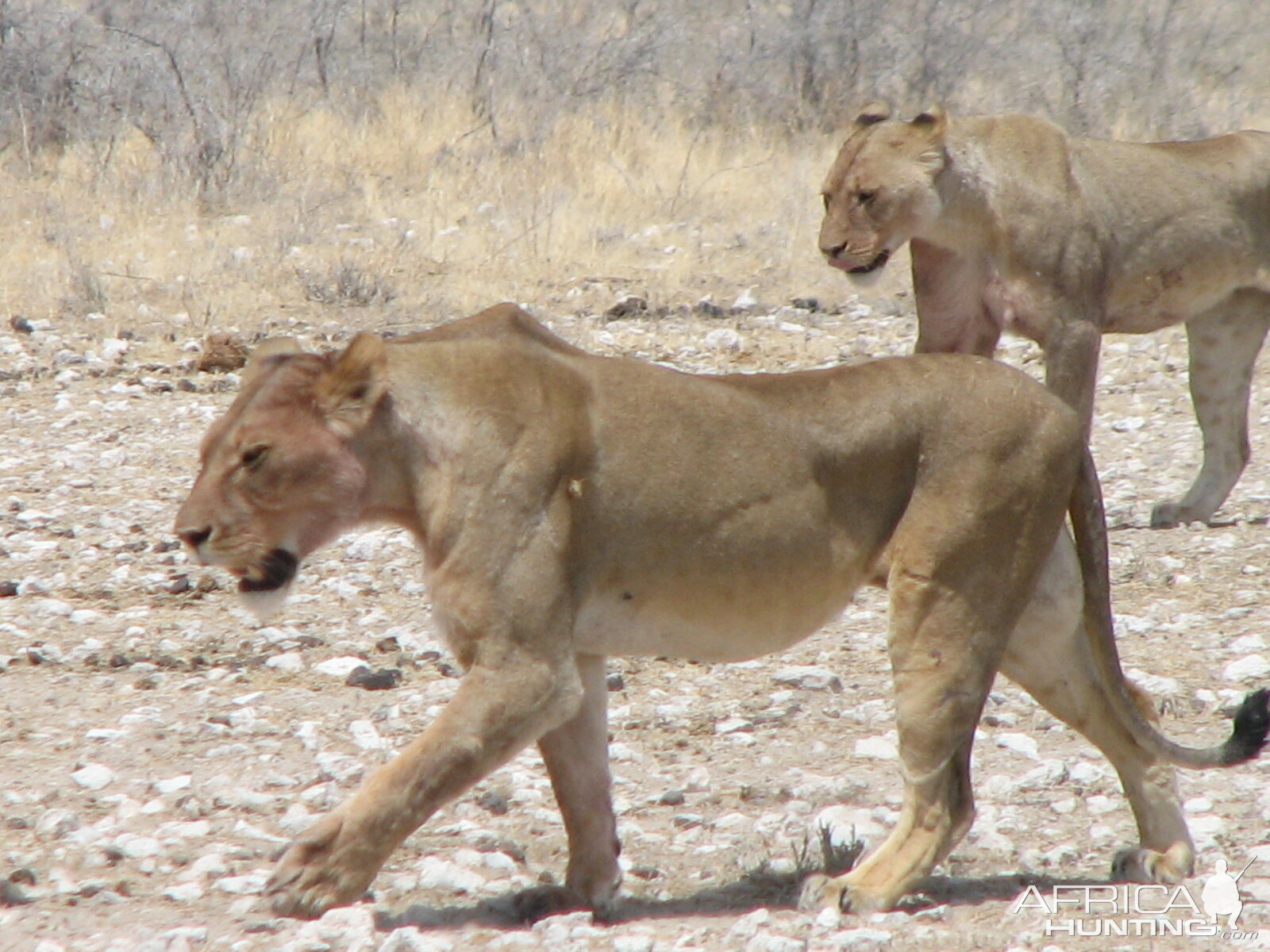 ANDREAS Ndakukamo, the Omusati farmer and businessman who lost 16 cattle to lions since last month, said until the lions have returned to the Etosha National Park, they would be pursued and killed.

Ndakukamo, who is just one of the affected area farmers of Omutambowomawe in the Otamanzi constituency of the Omusati region, was approached about the latest incident of a lion killed at Omutambowomawe last Friday.

The environment ministry offers farmers an off-set fee of N$1 500 per head of cattle killed by a predator.

"We will kill them. We will protect our cattle, and no longer wait for the ministry to come," an agitated Ndakukamo said.

He had lost 12 head of cattle by the end of last month, and another four last week to the lions.

The lions, believed to have strayed from the Etosha National Park, the boundary of which is a mere 7km north-west of Omutambowomawe, a communal grazing area in the Ongandjera communal area, were initially a pack of six, of which two were shot on 24 April.

The other four escaped, and have been wreaking havoc in the area.

On Friday, prior to a large male being killed, the four lions killed 15 cattle, bringing the total number of cattle killed since last month to 27.

Apart from the four cattle which Ndakukamo lost last week, three other animals belonging to Ongandjera King Johannes Mupiya were also killed, while the other eight belonged to other area farmers.

"I always maintain that cattle are expensive and hard to look after. We have already lost cattle to the drought, and now the cats are killing our cattle again. We will not rest until they are all dead," Ndakukamo stressed.

"Where have you seen cattle going for N$1 500? I cannot accept that nonsense. They [ministry] better take that [N$1 500] and go buy cattle to come and give us.

"We do not know where to get cattle for that amount," he said, adding that if an animal is slaughtered, the meat could fetch six times that amount.

Another farmer in the Omutambowomawe area, who has not lost cattle to the lions because his farm is surrounded by other farms, agreed with Ndakukamo.

This farmer, who declined to be named, said that apart from the cattle being killed, the lions also posed a danger to people in the area.

"They will now become aggressive after losing members of their pride. Mark my words, it will not be long before you will hear of a person killed or maimed by a lion in the area," he said.

Human-wildlife conflict has intensified across the northern regions lately. Elephants destroyed mahangu crops last month at the Onamatanga village, and at the Amaupa village near Omakange.

Meanwhile, The Namibian understands that another herd of old elephant bulls, believed to have come from Angola, are terrorising Ohangwena farmers since last week. The elephants are allegedly eating crops at villages bordering Angola, between Okongo and Eenhana.

A source has also indicated that three lions have escaped from the Oshikoto side of Etosha, and are roaming near Oshivelo. No reports of cattle killed have been received so far.

Speaking on NBC TV recently, environment minister Pohamba Shifeta said the ministry was doing all it could to control wildlife, especially lions.

He stated that lions stray from Etosha during mating season.

He added that weaker male lions escape from the park with their female companions to avoid losing them to powerful males.

"When they come out of the park, to protect their females, it is when they start troubling people."

Shifeta pointed out that the ministry was still to fence off about 824km of the park with an elephant-proof fence to secure the whole park, an exercise he said was "expensive and will take time".

He also said government did not compensate for the damage caused by wild animals.

Sounds like there is going to be a few lion skins hanging on the fence lines.

At the risk of repeating myself, if my livelihood and my ability to feed my family was at risk, I would be hard pressed not to do the same. It is easy to be critical of those who kill these animals, or who provide support to the poachers who kill these animals, when we are sitting in our homes in the West, safe, warm (or cool, for those of you further south) and well fed.

If the world values these animals, then the world needs to step up and do something for those who have to live with them. Giving money to HSUS or WWF is not the same as doing something. In fact, it is worse than doing nothing - these organizations and others like them keep promoting bans on hunting or killing any animals, and then express outrage when some are killed in defence of life or property. Of course, outrage is effective in terms of fundraising, but does nothing to solve the problem.

CAustin said:
Sounds like there is going to be a few lion skins hanging on the fence lines.
Click to expand...

Charlie, I believe this will always be the case regardless of laws, rules etc! If I had a farm or ranch and a lion or other predator was killing my stock, I wouldn't think twice about shooting that lion or other animal. If I had time, I would let a hunter come pay me to find and kill the lion. Over a period of time long after you and I are gone, human population growth alone will eliminate this problem. Of course there will be little if anything to hunt by then except for the very wealthy!

Yep the poor farmers are stuck between a rock and a hard place on this one. Sounds like a lot of cattle have been taken in a short period of time.
K

I don't blame the farmer one bit ,you have to protect your livelihood . Forrest 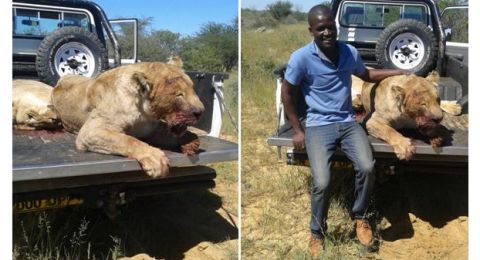 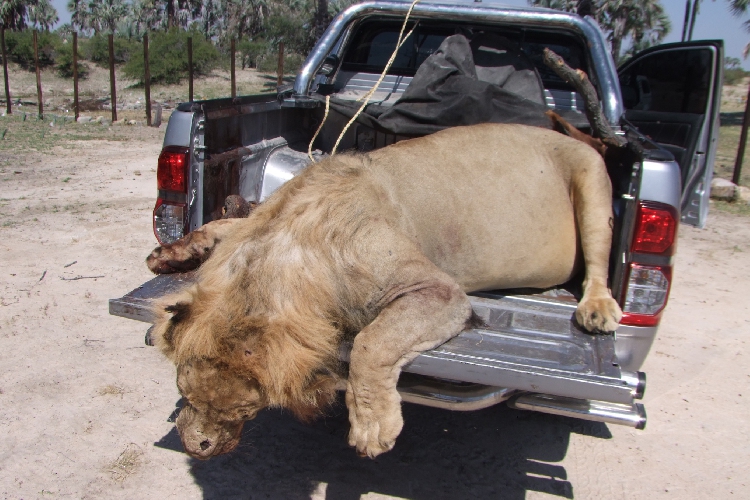 The farmers are in a very tough situation. Can't blam them for killing the lions. I think though they ought to keep those pictures off line. Antis need this to keep up their assualt on killing animals. They don't understand or care about the effects . Only stop killing wildlife. Their theory .....stop killing/ hunting and it will all work it self out. Hey look how well they did in Kenya. Botswana will be the next shining example of eliminating hunting. Sad very sad.
Tommorow is promised to no one. Go live your dreams.

This sequence of events can not explain it in any more graphic detail.

One of the Anti's wants to save the lion, bloody well pay the farmer and secure his livelihood!


ps. George Berkeley, in his work, A Treatise Concerning the Principles of Human Knowledge (1710), paraphrased thus: "If a tree were to fall on an island where there were no human beings would there be any sound?"

"If you delete the picture, did the Lion not really die?"
You must log in or register to reply here.

Too Many Lions In Kunene