Well folks I did have a great adventure in Namibia! I had this trip planned out for about a year and it was to begin with my first visit to a sheep show in Africa. I am a sheep rancher raising Dorper sheep in Texas and have gotten to know many farmers in Southern Africa. The first part of my trip was to the Namibian Dorper Sheep Championships in Stampriet. This little town is in the central part of the country and like most of Namibia is an arid area. So when I arrived at the airport in Windhoek I was met by my PH Gysbert ver der Westhuyzen owner of Aru Game Lodges. You have to get used to the Dutch names in this part of the world! As luck would have it he and his father raise a few sheep and cattle in addition to the hunting business so he was keen to visit the show as well. So yes my PH went with me to the sheep show before our great adventure was to begin! Due to not having daily flights from Windhoek to Katima I wound up with a day to hunt with Gysbert at Kalakwa Farm where his home is located. I told him I really wanted to hunt a giraffe but did not know if that would be possible with just a day before we left for Caprivi. A neighbor had just phoned and said they had a problem giraffe. Now that is another story for another day but suffice it to say after a hard hunt I got my giraffe. Late in the evening we went to look for a baboon which happens to be one animal that has eluded me for many years. The typical scenario with baboons far away in trees mocking us as the sun went down. Knowing there was little chance for a baboon today I began to think of the next day and travel to Caprivi when a male baboon appeared and stopped in thick brush. As he moved out of the thicket I had to make something out of nothing and nailed him!
The following 12 days were spent at Balerwa Conservancy in the Caprivi achieving my dream of beginning to hunt the Big 5. I was fortunate enough to take a non trophy elephant, and very nice trophy buffalo, hippo, and red lechwe. A very encouraging part of the hunt was delivering the meat to the respective villages. All of the meat belongs to them and hunting is keeping the animals on the land period! It was a hard hunt to say the least. We waded through water each day up to chest high and walked many many miles each day as we pursued these amazing animals. We napped under trees during the day and had a picnic since it was too far to return to camp. This area has many large game animals but few small game. The only low point of this hunt was the realization of how many people and cattle are now inhabiting most of wild Africa. I only saw one steinbuck and one bushbuck the entire time so the small game has been taken for meat by the villagers for the most part. I encountered many elephants, buffalo, Chapman's zebras, roan, lechwe, kudu, waterbuck, and warthog. I never saw a trophy elephant but great numbers none the less. I was well cared for in my camp and they made sure I knew it was "my camp". I had a tent on a deck overlooking the river where I could hear frogs and hippos each night. The high point of the trip was likely taking a buffalo from a herd of 500. That is something hunters only dream of.
Whether it is an adventure to the Caprivi or simply the best plains game hunting that can be found in Southern Africa I recommend Aru Game Lodges. Their farms Veronica and Kalakwa are simply the best in terms of game numbers, quality, and quality of lodging and food. It would take a book to further describe how professional and pleasant Gysbert and his lovely wife and PH Danene are. Go hunt with them in Namibia! 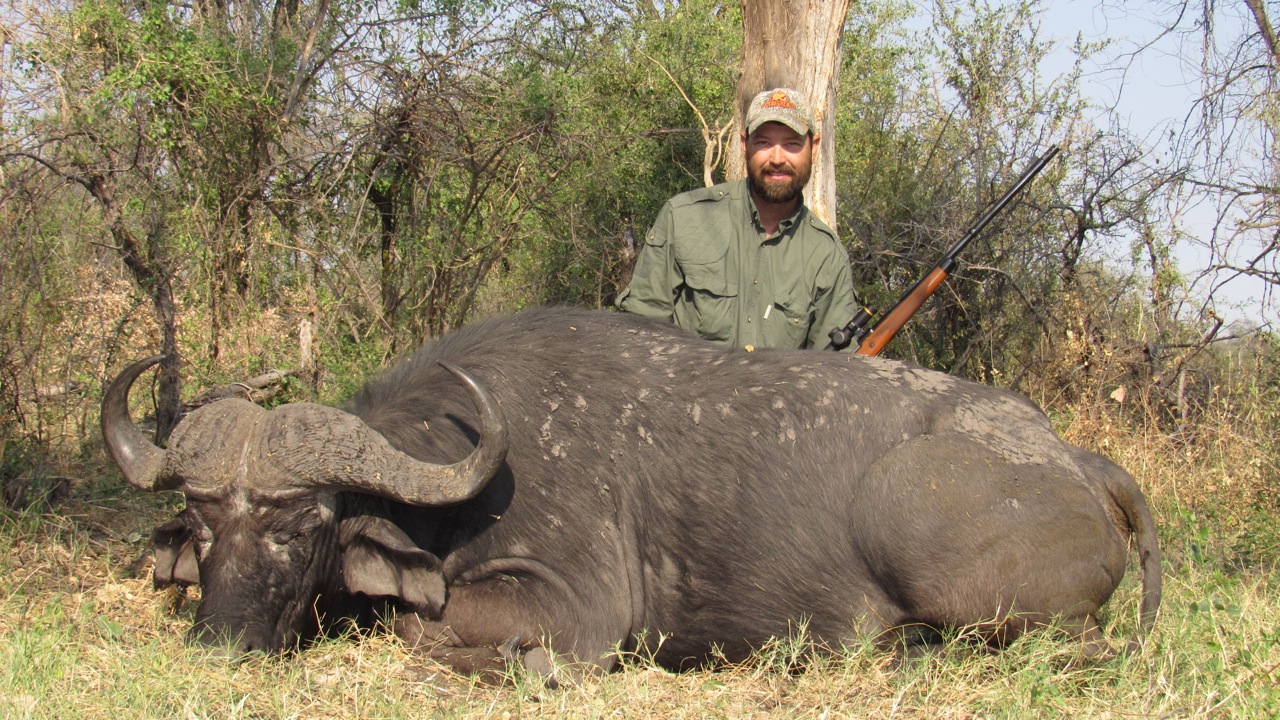 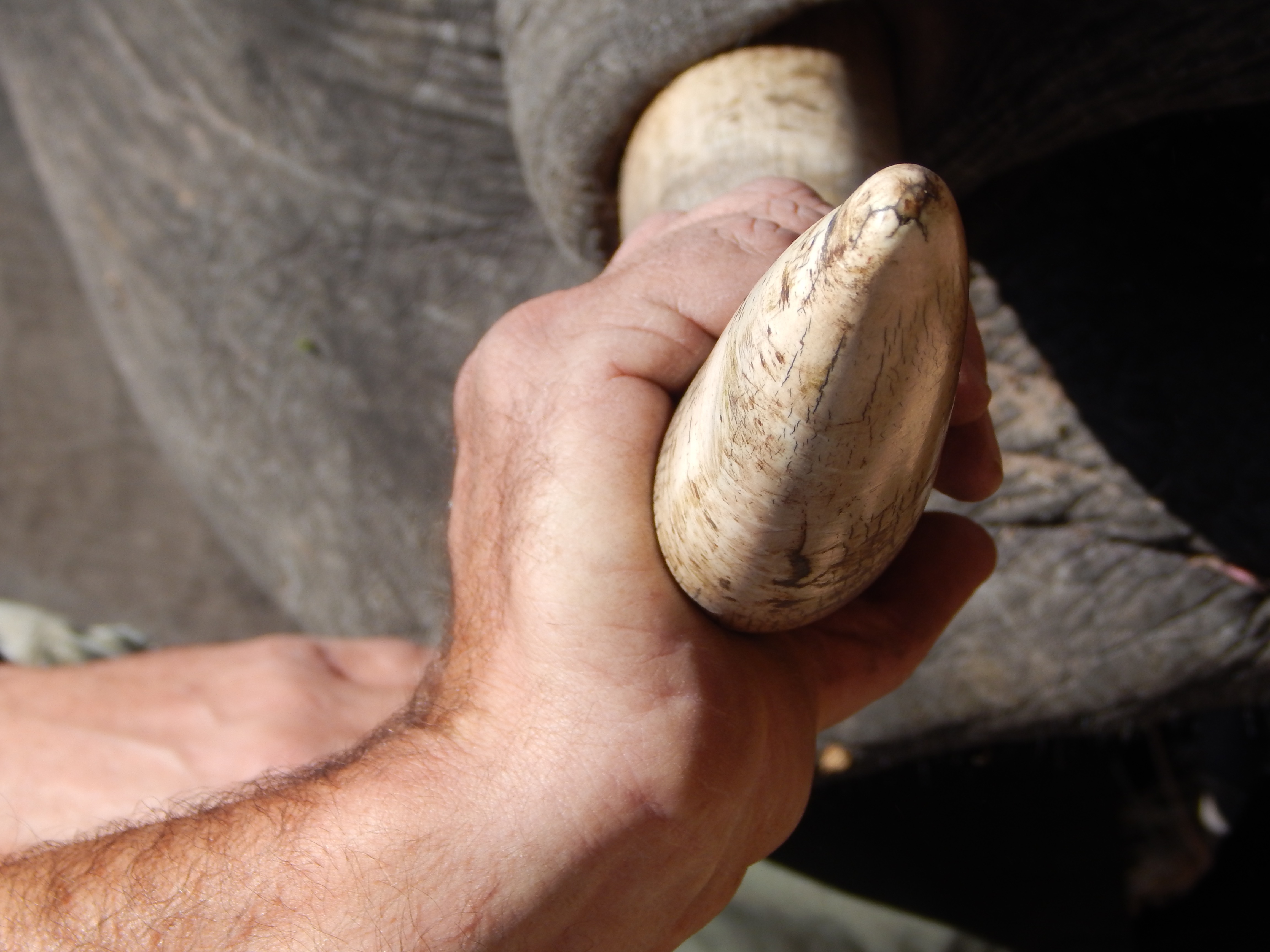 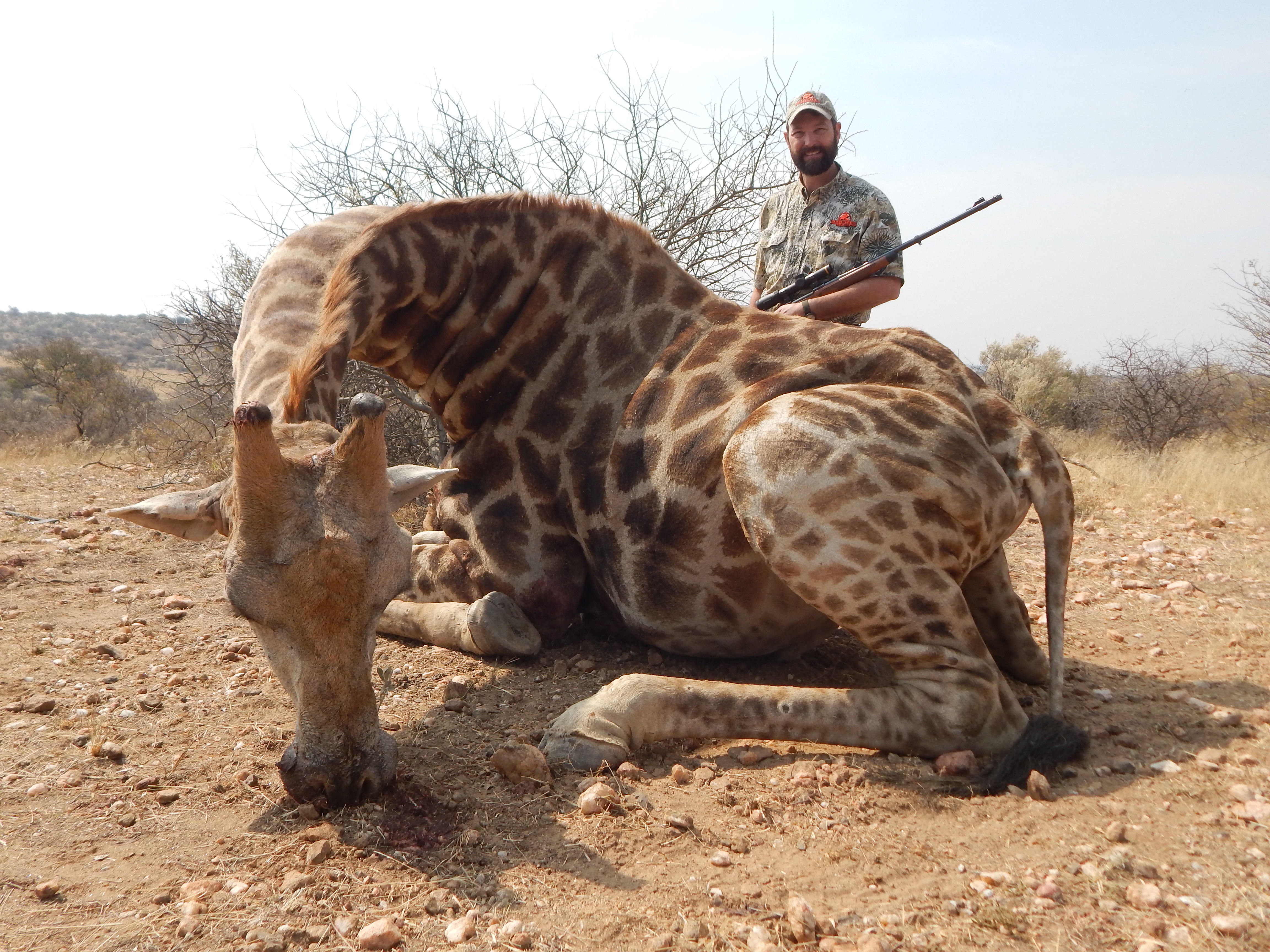 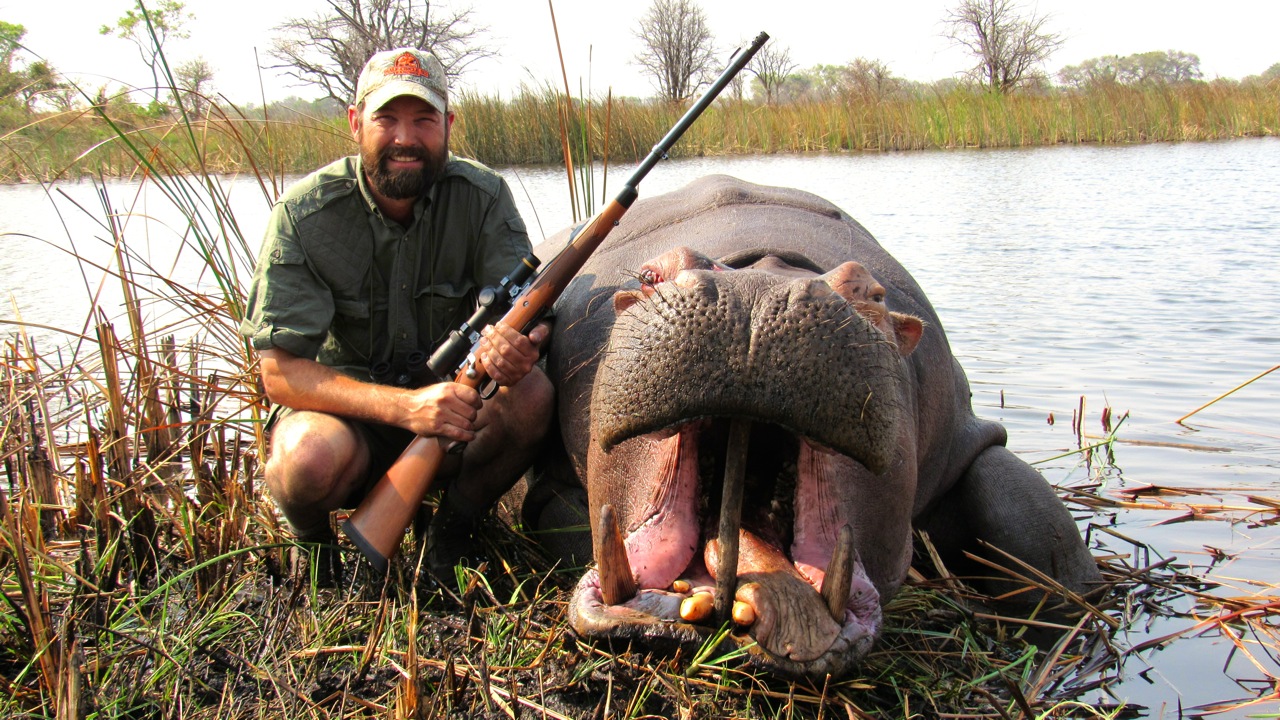 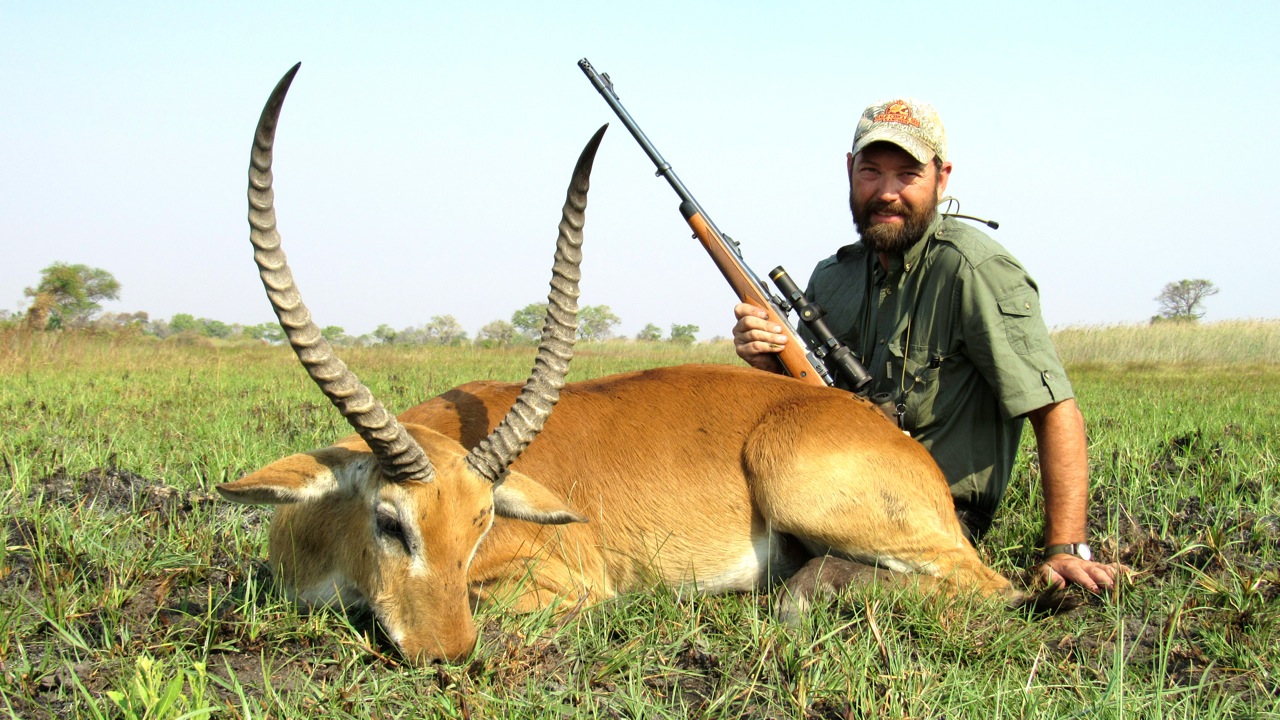 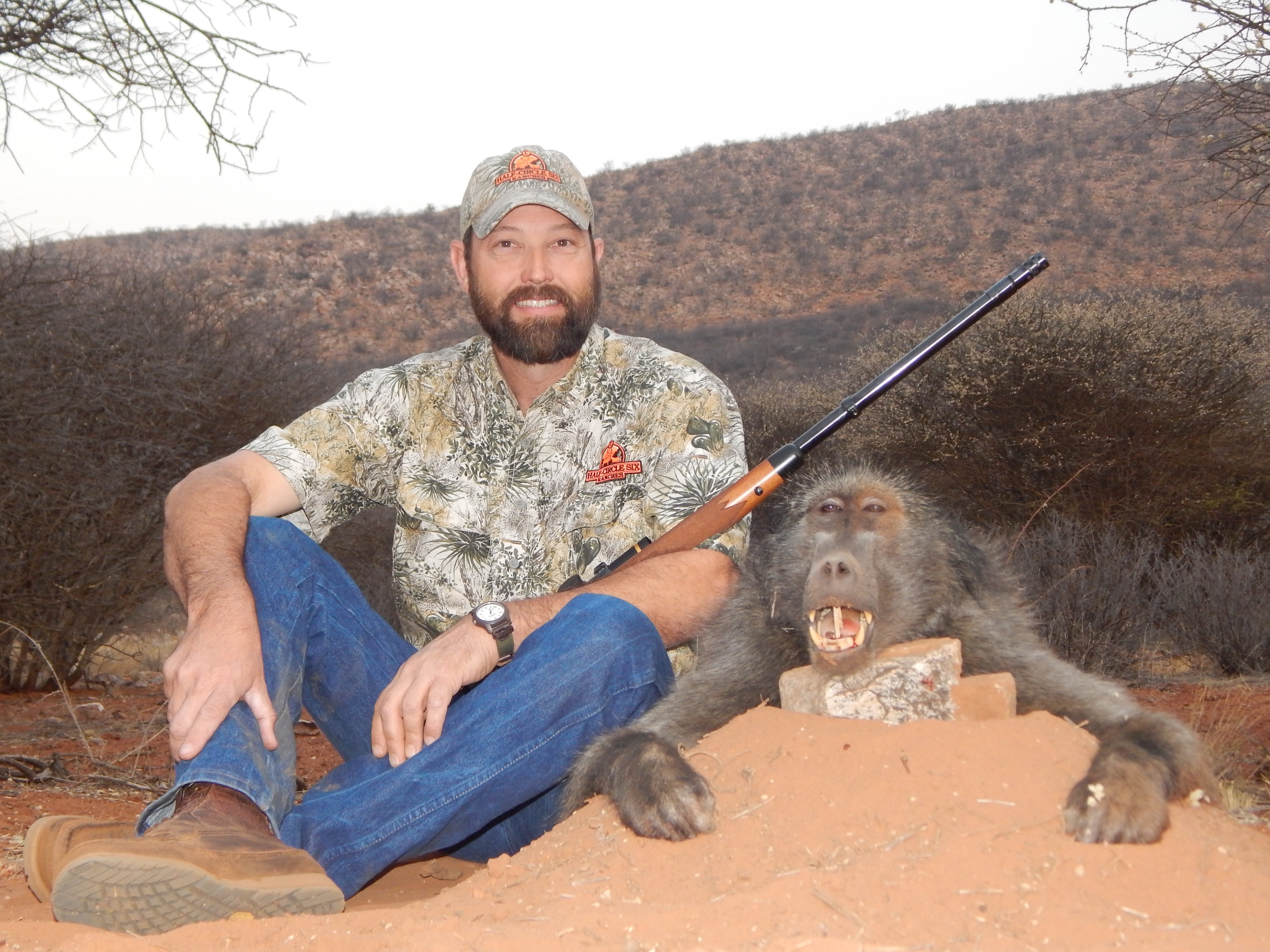 Pretty darn good start on the B5.

Write that book on the Giraffe hunt! Sounds interesting.

Congrats on your success in Namibia.

Congratulations on your animals.

Thanks for the report.
And here I am, returning to Africa of many faces;.... the sloe-eyed temptress with flowers in her hair who stole my youth and my heart, and left me an old man with a kaleidoscope of conflicting memories of many dashed hopes and some fulfilled dreams. E. Echols
K

To say you had a large hunt would be a understatement .
great hunt ,thanks for sharing .
I usually don't like to eat sheep but the Dorper are very good to eat. Forrest

Great looking buffalo. They worked a bit for the pose on the giraffe. Congrats on some nice trophies. Bruce

Great stuff Philip. The Caprivi is a special place. Congratulations on a fine hunt. Some awesome animals you got there.

great hunt nice trophies. Baboons have evaded me twice and your description of them mocking you is truly accurate
Any government big enough to give you everything you want is strong enough to take everything you have

Sounds like a great adventure. Look forward to hearing about the giraffe.

Congrats, Philip, seems like you had a great adventure, and nice trophies !

Well done. There's nothing like the satisfaction you get when you finally connect after some real effort.

Great hunting and excellent trophies.
You did have a good hunting.
Congrats Philip. Very good an article. Thanks for sharing.
Witold

I think the same as Dory.
Witold

Looks like you had a great trip Philip! Thanks for sharing with us!

Very nice sir, you took some great trophies.
Tommorow is promised to no one. Go live your dreams.

Congrats on the great animals!

Yes, as a matter of fact, I am in love with Namibia and her people! Now I just need to visit the coast and Etosha and I will have seen most of it. I think the only thing I would change would be the flights. Next time I'm going DFW-Frankfurt-Windhoek.

Regards,
Philip
You must log in or register to reply here.

Heinrich Tönsing
Does anybody have powder loads with speeds available for 93x62, Varget powder and 250grain GMX Hornady points?
45 minutes ago •••
J
JohnDM AES JohnDM wrote on AES's profile.
Do you still have .450-400 Hornady DGS?
Yesterday at 9:50 PM •••