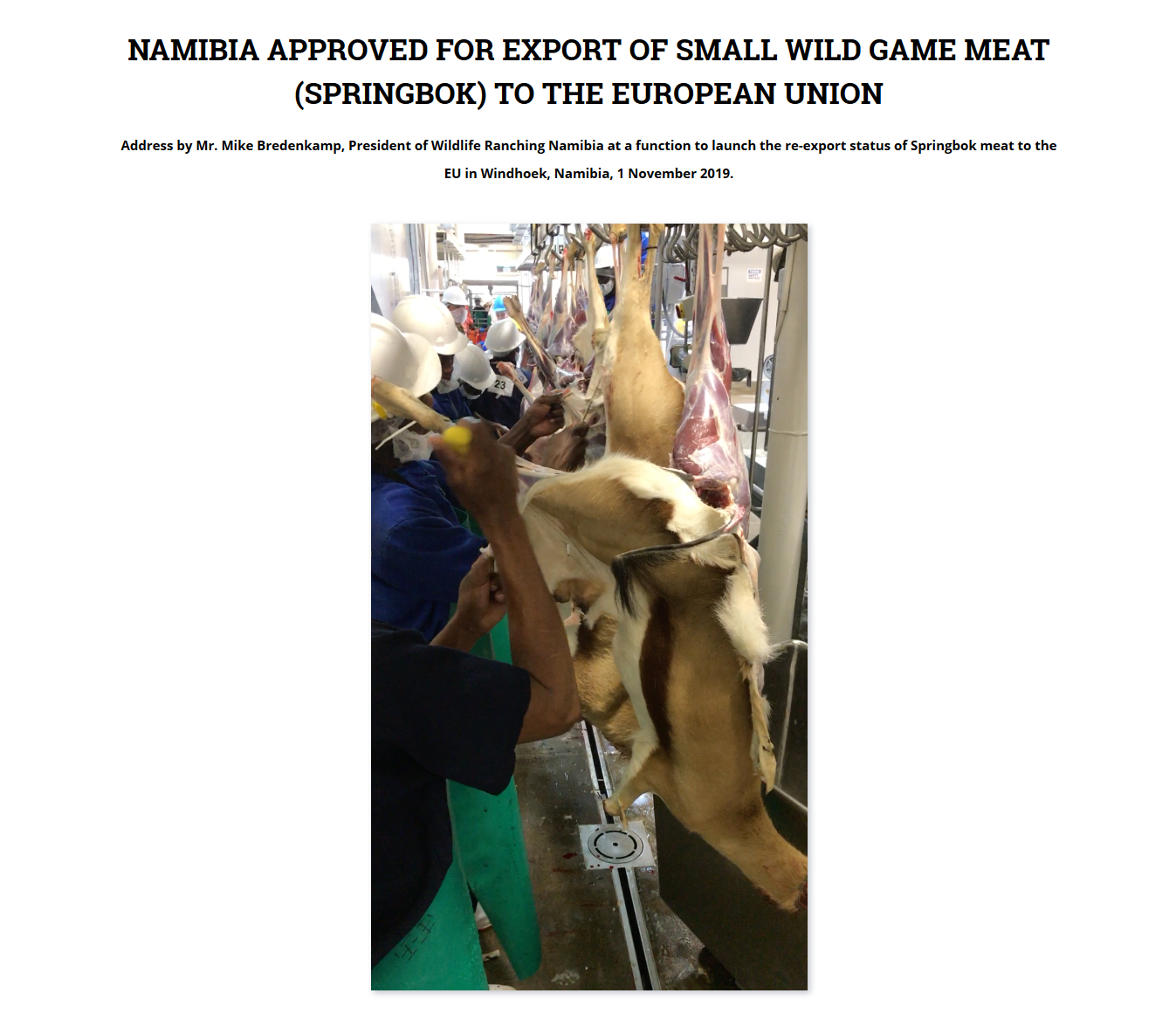 Wildlife Ranching Namibia, as well as the Wildlife Products steering committee are proud to announce that Namibia has officially (after much hard work done by many stakeholders in the industry) reached approved status for the export of Small Wild Game Meat (Springbok) to the EU. This is a very significant step for Namibia, and an important step on the road to Namibia Vision 2030, which foresees sustainable use of the country’s wildlife for economic benefit, as identified by the Ministry of Industrialization, Trade and SME Development (MITSMED) in 2016.

Some figures on the export of Game Meat from Namibia will give perspective. From 2003 to 2008, the value of Game Meat exported from Namibia tripled from N$11 million to N$31 million. In 2013 export reached a value of N$50 million (1000 tonnes). But, 3 containers with Game Meat originating from an abattoir in Namibia were returned from Europe in 2013, due to contamination with STEC Bacteria. This resulted in a self-imposed closure of game meat exports by the Directorate of Veterinary Services, until such time that the industry could put procedures in place to control Shiga toxin producing E.coli Bacteria (STEC) contamination. This has subsequently been achieved as we will show.

Internationally, there is a revived interest in healthy eating, as consumers prefer meat with less fat, more protein and no added hormones. This resulted in Game meat being viewed in a different light, and Namibian game meat, fits this description perfectly. In the decade from 2006 to 2015, the organic market grew double its size, and figures since 2016 showed that the market continues to grow with big strides.

As from the late 1980’s policy changes and better grazing conditions resulted in commercial farmers starting to utilize game, thereby increasing the demand especially for trophy hunting and meat production. In Namibia currently, cattle numbers are decreasing and wildlife numbers increasing, due to a few factors. It is widely viewed among experts that with the warmer climate, more sporadic rainfall, and increased bush encroachment, wildlife farming may become more economical — with the value and demand for the products thereof, likely to increase. It has been hypothesized that wildlife production can equal, or outperform cattle production in the long run.

A wildlife-based economy is looking to become a hugely viable option for Namibia.

Through consultation with experts in the Game industry in Namibia, it is concluded that game numbers in Namibia are currently the same as in 2009, due to concurrent drought for the last 10 years.

Compliance to EU Acts and Regulations.

Before a non-EU country is authorized to export meat products to the EU, the EU Commission, or approved representative authority (such as DVS) carries out an audit to verify that all the criteria provided for, under the EU legislation, are fully complied with.

Important is the fact that all EU countries have the same requirements for import of fresh game meat, and thereby prevent infectious diseases spreading to humans. The food laws of the EU thus put strong emphasis on process controls, throughout the food chain, from farm to fork.

Namibia subscribed to the Codex Alimentarius, and need to abide by the requirements thereof. The scope of the code, deals, amongst others, with hygiene requirements for the raw meat, meat preparation, and processing of the meat. It is important to understand that the whole chain of stakeholders dealing with the carcasses, from the harvesting teams, right through to all wild game export business operators, must, during all stages of harvesting, processing and distribution, ensure that all processes comply with the requirements of these strict laws and standards.

Where does the STEC bacteria (that caused Namibia to withdraw it’s game meat from the EU) come from?

Cattle and Game are all important reservoirs for Pathogens, including STEC and Salmonella species. Contamination can be transferred to the carcass from the intestinal tract, mouth, hide and hooves of the animals. Slaughter establishments employ a variety of controls to prevent, eliminate, or reduce these pathogens during the slaughter process. With the STEC bacteria, the effectiveness of the sanitary dressing procedures is crucial, and somehow differ from cattle or sheep abattoir procedures, during the harvesting, slaughter and deboning, to minimize contamination, and maximize decontamination.

Which actions were taken to rectify the problem with STEC?

Scientific studies were conducted, from harvesting to processing, faecal matter, meat, and the abattoir environment were all tested thoroughly, and tests were all conducted by Central Veterinary Laboratory in Windhoek. In accordance with the correct protocols, slaughter and processing techniques and procedures, (including sanitation) as well as hazard control, were revisited and recorded for future Standard Operating procedures.

As Namibian game meat is, and always will be, a niche product in overseas market, it was decided to establish a priority list for marketing of the product. Priority markets were identified as follows: The Netherlands, Germany, Italy, France and the United Kingdom. However, the demand for Namibian game meat in other countries, such as Norway and Switzerland, is also substantial. In the EU alone, the demand is more than 100 000 tonnes per annum. Based on supply chain analysis, it can be concluded that sufficient supply of commercially harvestable game eat is available for some of these markets. The limiting factor here, is the availability and capacity of the Game meat Handling facilities (Game Abattoirs). In Namibia, it is currently only Farmers Meat Market, as an operating abattoir, that has applied for Game meat export status. We all hope that this situation will change soon.

For Namibia as a country, with Namibia vision 2030 in the forefront of our minds, this breakthrough in us achieving the Export status of our Game meat to the EU, is a Big Deal. We, as stakeholders in the Agriculture sector, in the Wildlife Sector, but most importantly, as citizens of our beloved country, know how desperately we need new avenues of monetizing our natural resources in a sustainable way, to take our country forward. Therefore, we believe that the development of the Game meat value chain for exports can assist greatly in achieving these goals. It will be done in the increased job opportunities in this sector, as the number of accredited Game harvesting teams, game handling facilities and processors, as well as a lot of related businesses will be growing.

I am thankful to be able to be a part of a visionary group of people who pushed the limits and worked very hard to achieve this goal, some doing it without any monetary compensation.

Therefor I would like to thank the following organizations and persons for making this accreditation possible:

Prof Louw Hoffmann and his students from University of Stellenbosch

Wildlife Products Steering committee is a committee investigating sustainable, economically viable, opportunities in the Wildlife industry in Namibia. Co-Initiated by MITSMED and GIZ, and Sponsored by the Deutsche Gesellschaft für Internationale Zusammenarbeit (GIZ).

Oh the antis are going to love this. Thing is we have enough game meat in the UK people just dont want it because they think its for the super wealthy. And by people I mean the non hunting community
The Empire was built on cups of tea. When in doubt, fear, joy or any other human emotion tea is to be drunk.

Good work Namibia. This country continues to be a leader.
Tommorow is promised to no one. Go live your dreams.

Great News...This just might open the door for the U.S. to reconsider their ban on game meat. Springbok is yummy
You must log in or register to reply here.

B
BillyMiller Qc_BearHunter BillyMiller wrote on Qc_BearHunter's profile.
Hi. I’m also new to AH. I’m a professional hunter in Zambia. If you would like me to quote or give you any advise would be more than happy to help. You can reach me on WhatsApp or Signal on +260 977 583697
56 minutes ago •••