Some hunters have all the luck!

Near the southern border of Namibia’s Etosha National Park, nine-year-old Michele Kuri and PH Cornelius Coetzee were sitting silently on the platform, built high up in a mopane tree, waiting for a big eland bull to appear. Michele Senior was looking for a cheetah on the plains with his PH; his mother, Anne, was looking for a hyena and was sitting in her own tree blind with her PH.

Michele had already taken four animals with Cornie over the last 10 days, and was now quietly waiting for him to give the next order to shoot. His little mind was, as always, searching for questions to ask a PH about hunting in Africa. ”Which are the most difficult animals to hunt?” he whispered. Cornelius whispered back: “Kudu and oryx” - two species that were still on little Michele’s wish list.

Silence overcame them. Any animal could appear at any moment. Suddenly Cornelius held his breath. He couldn’t believe what he was seeing. It couldn’t be true. A big, male cheetah was coming quickly into shooting distance from the blind. Can any little boy be so lucky?

Getting the .300 H&H in position for Michele to shoot, Cornelius quietly instructed him:

“A male cheetah. Can you see him?”

“Then, whenever you’re ready: Shoot!”

One bang and the cheetah spun around and dropped to the ground. Little Michele was jumping up and down, and the tree stand quickly became too small for the two of them. Cornelius tried to calm him down. “Slowly, slowly. You still have to be careful.” Getting help from Cornelius to climb down the flimsy ladder, Michele started running towards the trophy and turned around on the PH’s words: “Don’t run, calm down!” he said, grabbing Cornelius around the neck.

The very old male cheetah had a shot right through the heart. The boy looked up at Cornelius with tears in his big, brown eyes. “Daddy is going to be so proud.” Michele called his dad on his cell phone to give him the news. But daddy totally misunderstood and it took a second call to say: “What? Yeah! Bang…Boom…Dead?!” 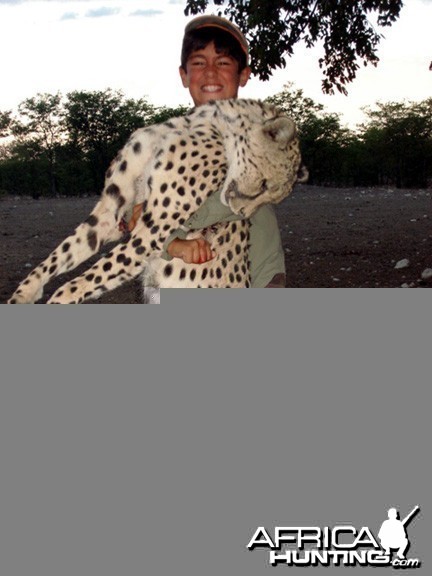 Nine year old Michele Kuri just might be the youngest hunter to bag a cheetah, taken with PH Cornelius Coetzee of CEC Safaris near the southern border of Ethosha National Park.

Returning that evening to camp with the Kuri family was something none of us at CEC Safaris will ever forget. The love, pride and trust Michele Sr. had put in his son was obvious in his eyes. Michele, in turn, had also earned Cornie’s confidence and trust, too.

Surely, this is the only safari in Namibia where a nine-year-old kid bagged a trophy cheetah.
Last edited by a moderator: Dec 1, 2016
African Hunting Gazette
You must log in or register to reply here.