It is doubtfull whether I will ever get to hunt Africa but this knife is african themed because I was given two of the component parts I will use for the handle.
I have knives to do just about all chores that I need them for but have never had a dedicated skinning knife. I was put off the skinning design when I worked on the first high country station after leaving school in the 1960's, as the knives provided for keeping the farm houses in meat and the dogs fed were of the skinning design and I found them to have way too much belly for much of the work that needed doing, so I bought a straight bladed knife with much less belly and have never used a skinning knife again.
Recently I was talking to the farrier and I asked him if he had any worn our farriers rasps and we got onto talking knives as he is also a beef worker and the upshot was that he dropped off a broken rasp a few days later.
In the meantime I had been drawing up sketches for a skinning knife that had a little more belly than my usual knives but not near as much as the traditional Green River knife that is generally used on the farm. Most of the skinning I do is on soft skinned game and there is not a lot of knife work needed when done warm but if they are left to get cold as sometimes happens with animals from a hunt then a little more knife work is called for.
After a couple of tries I came up with this 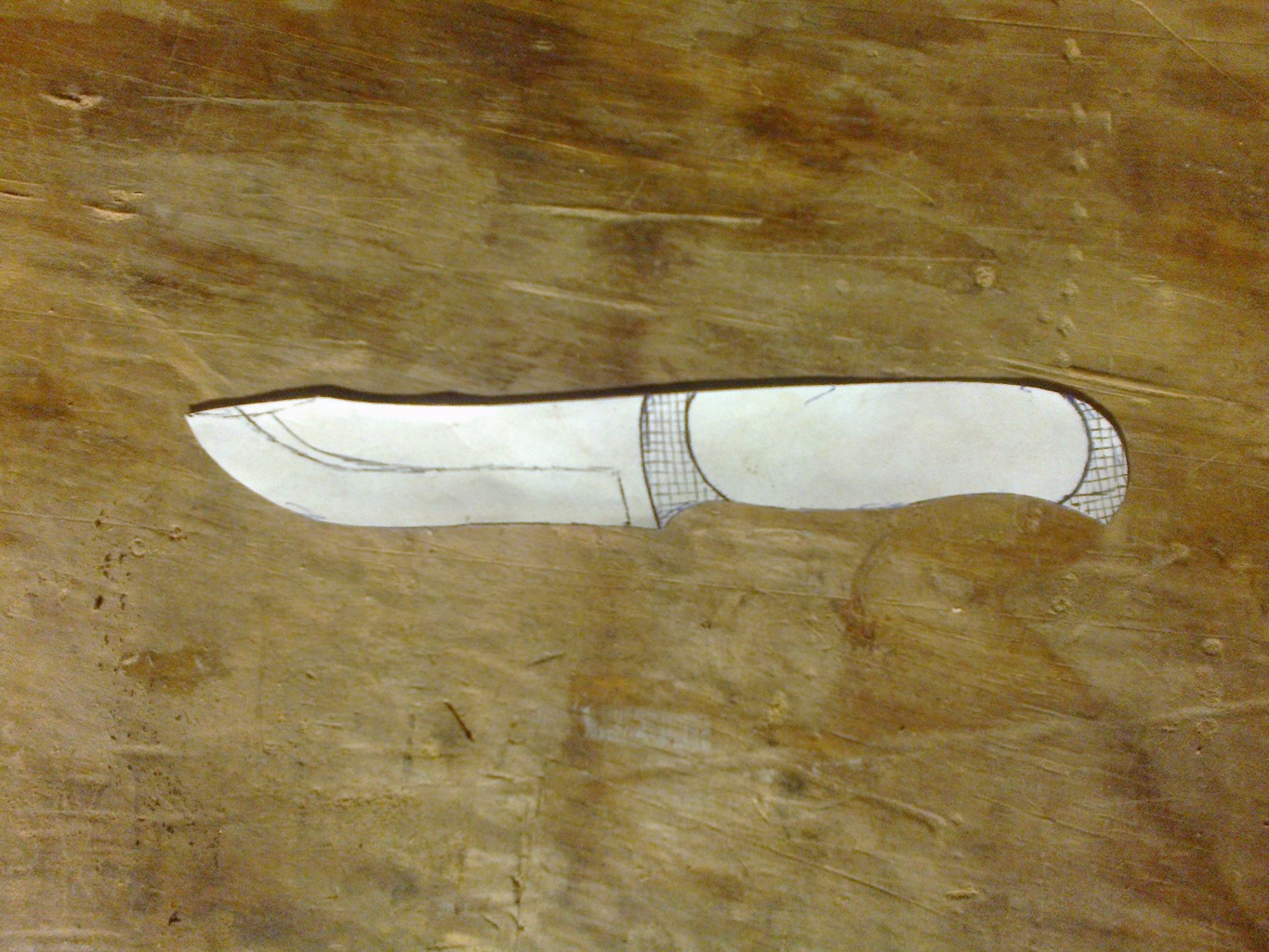 Then transferred it to a piece of 3/8 thick hardwood wood that would be used to scribe the pattern onto the steel. 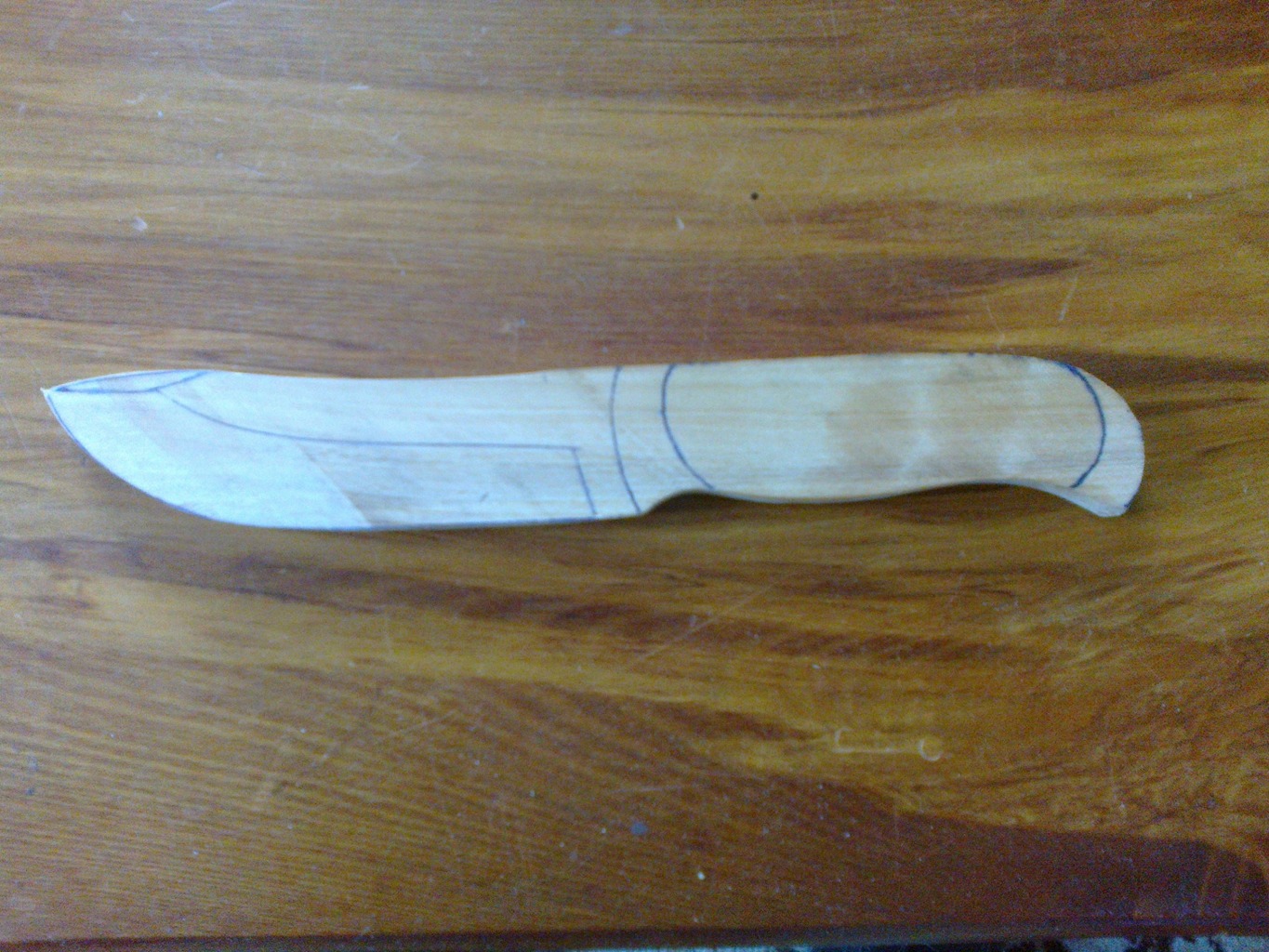 When the rasp was dropped off I was pleased to see that the longer end of it was just long enough for my pattern so I got the fire cranked up and annealed it before I did anything else. 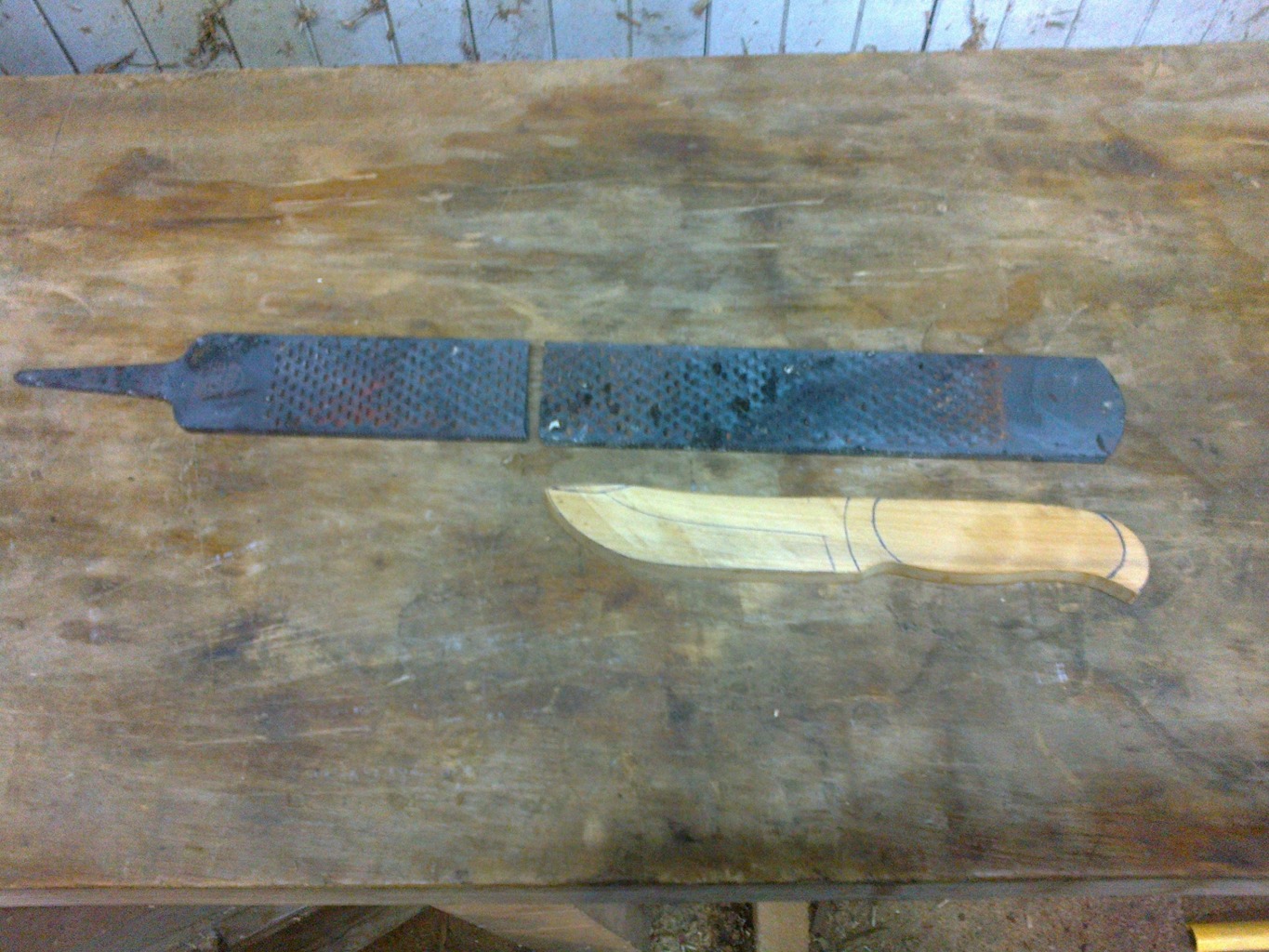 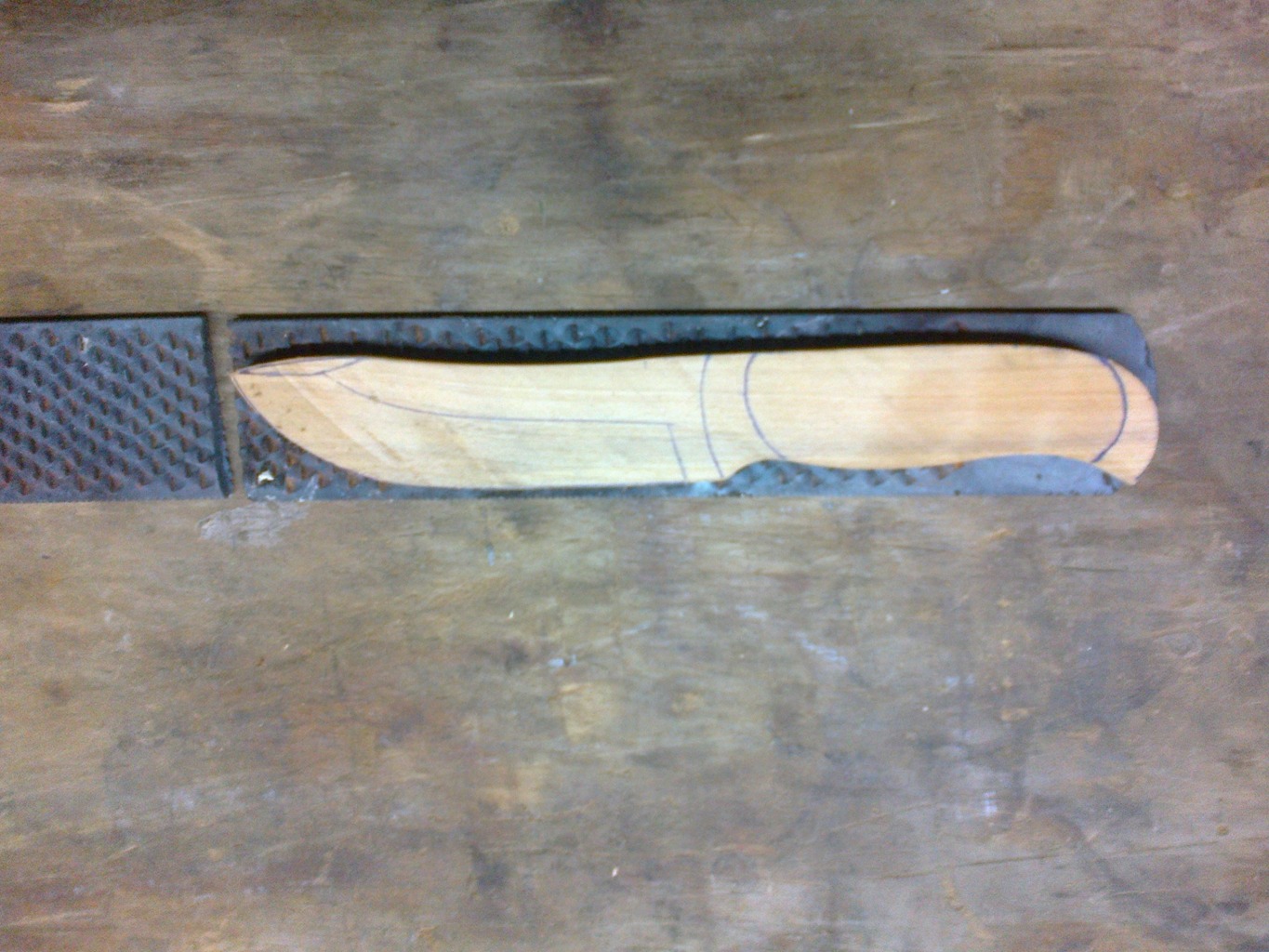 The rasp was 5mm thick which is way too thick for a knife so I started the grinding off of the teeth. The fine side was easy but the coarse side took quite a bit to get back to the depth of the teeth dimples. I wanted to just leave the suggestion of the rasps origin in the finished knife so eventually bought it back to 3mm thick.

This was about half way on the coarse side. 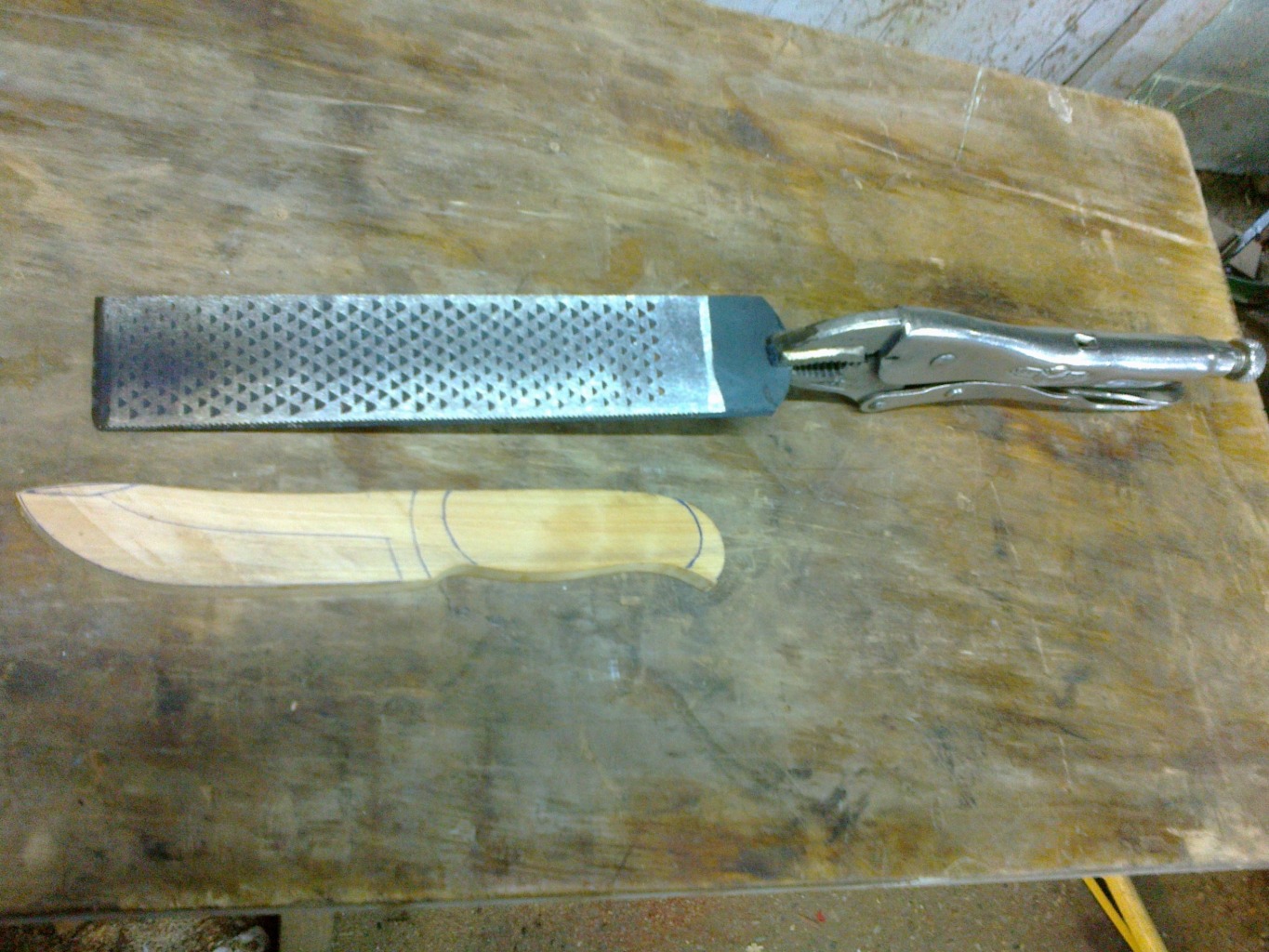 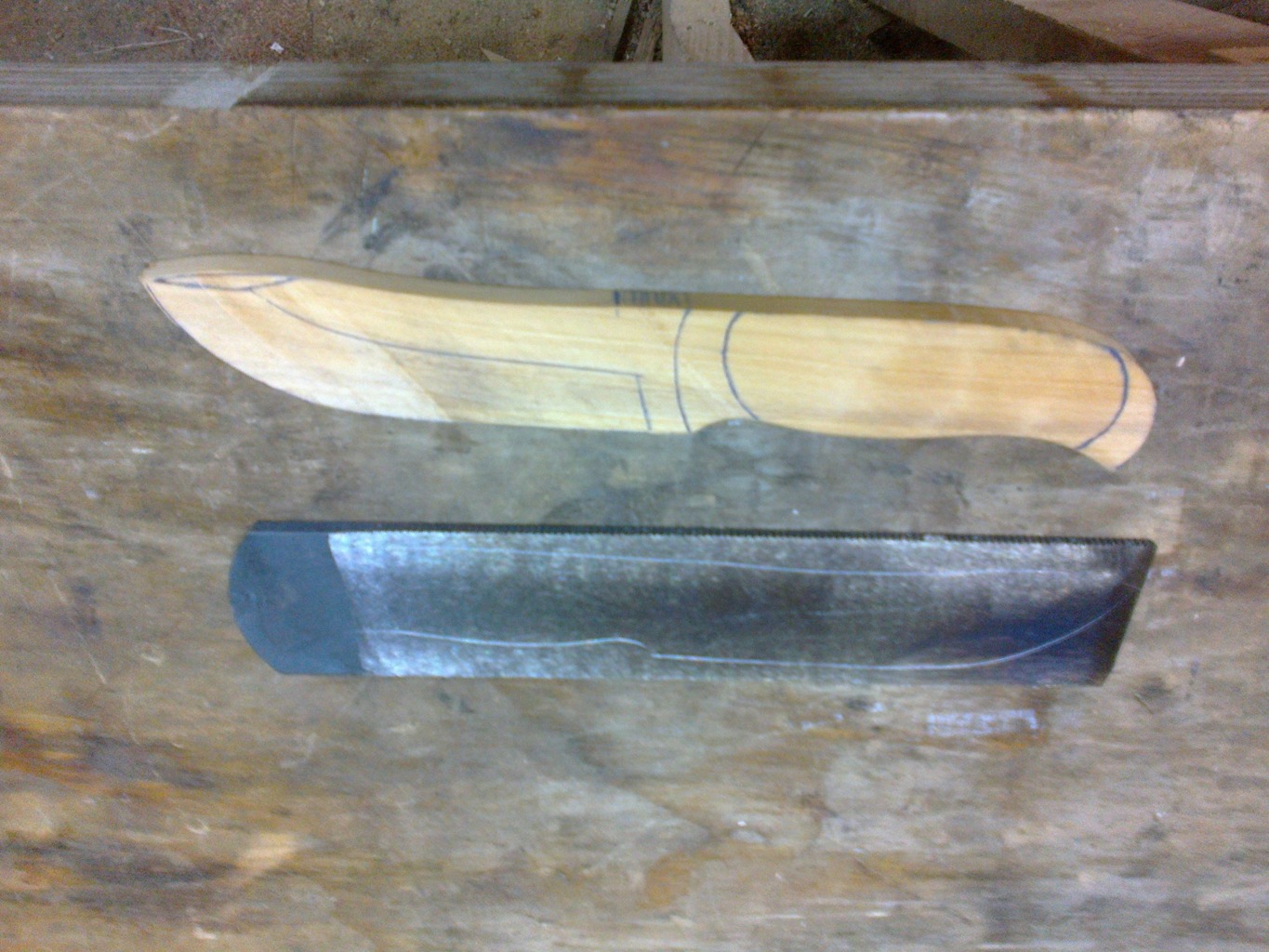 After a while I had the shape nearly right 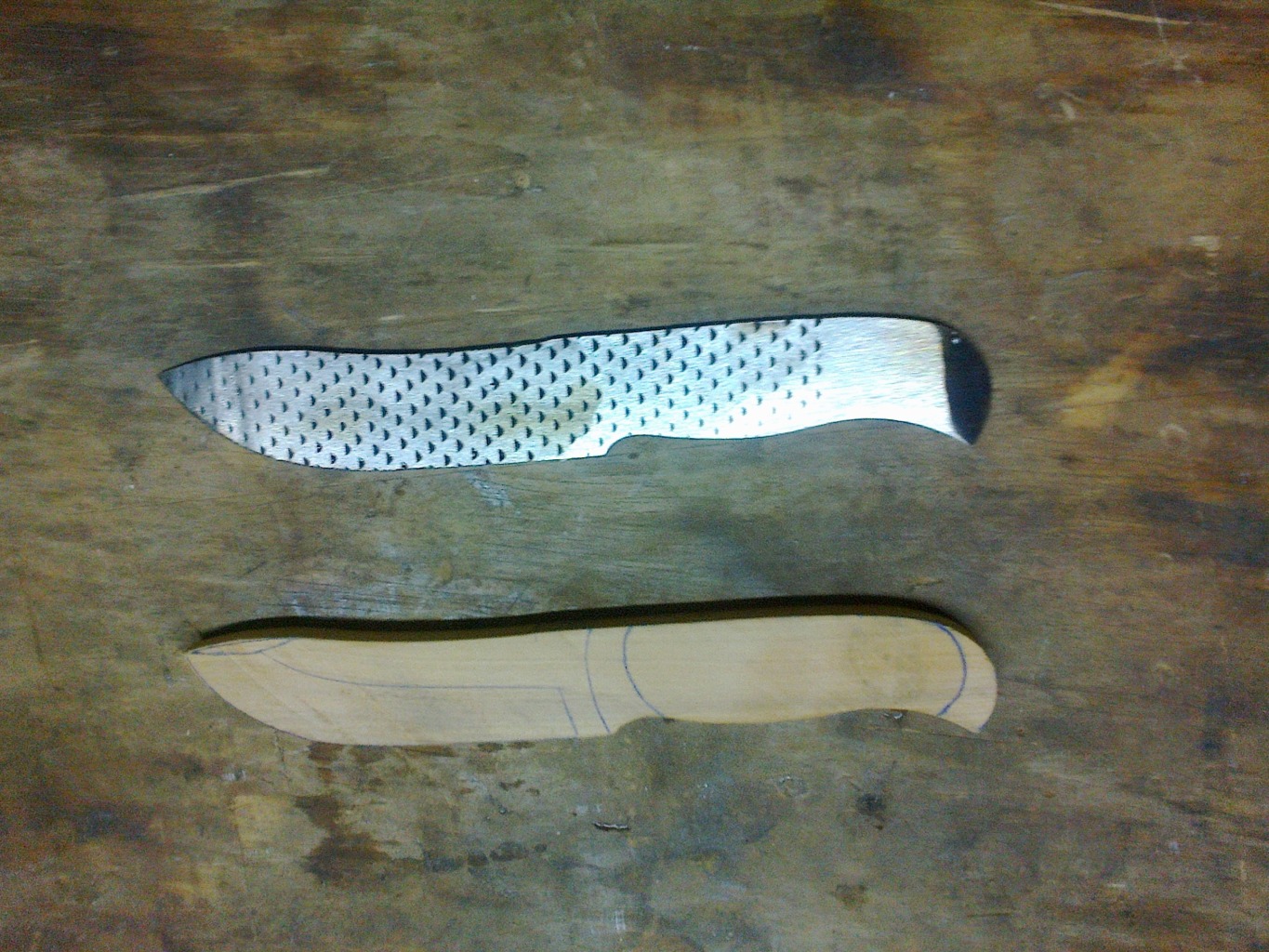 So then proceeded to grind the rest of the thickness of the coarse side to get rid of almost all the remains of the teeth dimples.

Spent an hour on it this morning and got the handle drilled for the rivets and the lightening holes. Got the start of the grind done just to mark in the rear lines. 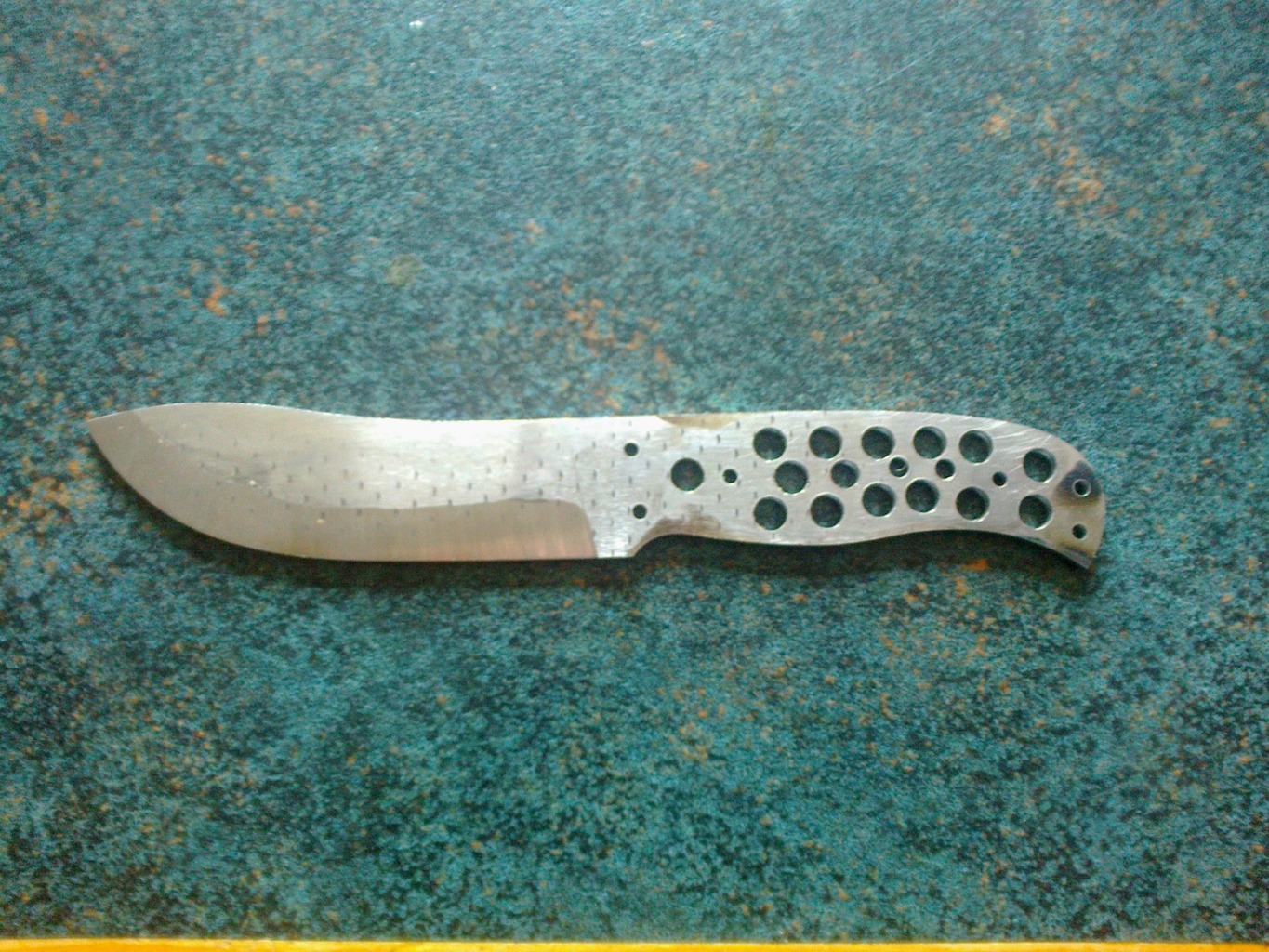 You can see the difference between my design and the typical skinning knife that is seen on most farms and many hunters carry. Way too much belly length and not ideal for opening up down the legs in the blade up position. A clumsy knife in hand for me. 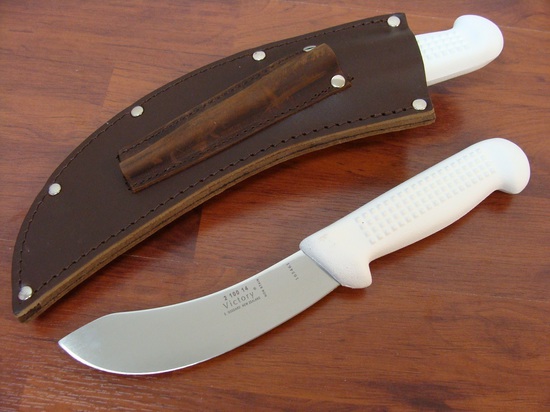 Finished the bevel grind which leaves the edge at .025-.03 then polished it back with 220 grit paper. The top edge of the grind was almost at the spine so I blended it all together. Will stay at this stage until it gets cold enough for me to light the fire for the heattreating.
Not sure what I am going to handle it with yet but suspect I may just do a plain hardwood one without the contrasting buttcap and bolster. 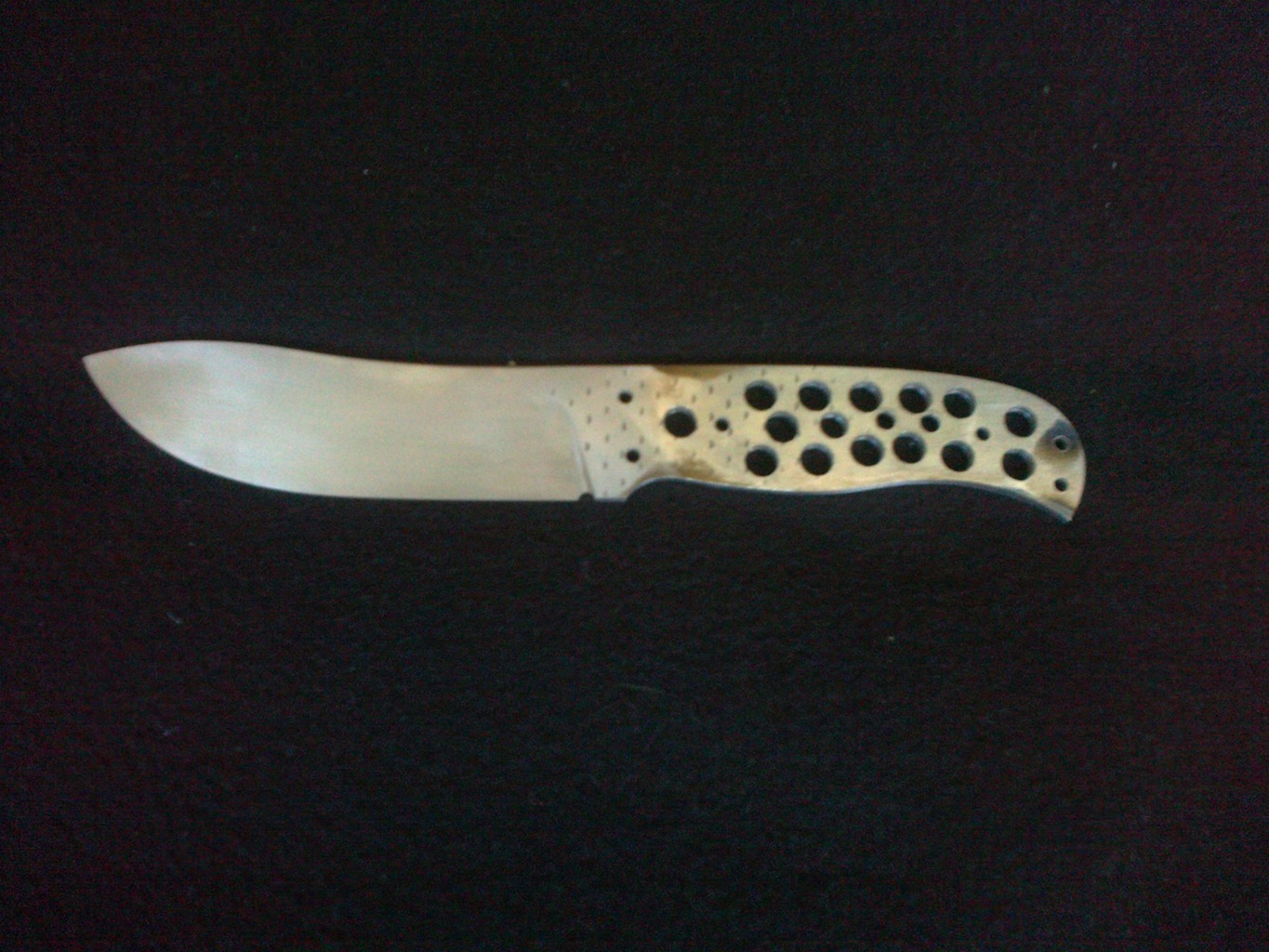 Gert is a good friend of mine from South Africa and he sent me some buffalo horn for a set of rifle accents a while back and there was a tip left so I decided to use that for the bolster and when I was talking to Gert (email) he sugested giraffe bone to finish it off. It duly arrived and I had the couple of rifle projects I am doing up to a stage where I can spend time for myself so I took the bits and pieces up to the shed to start the handle process. 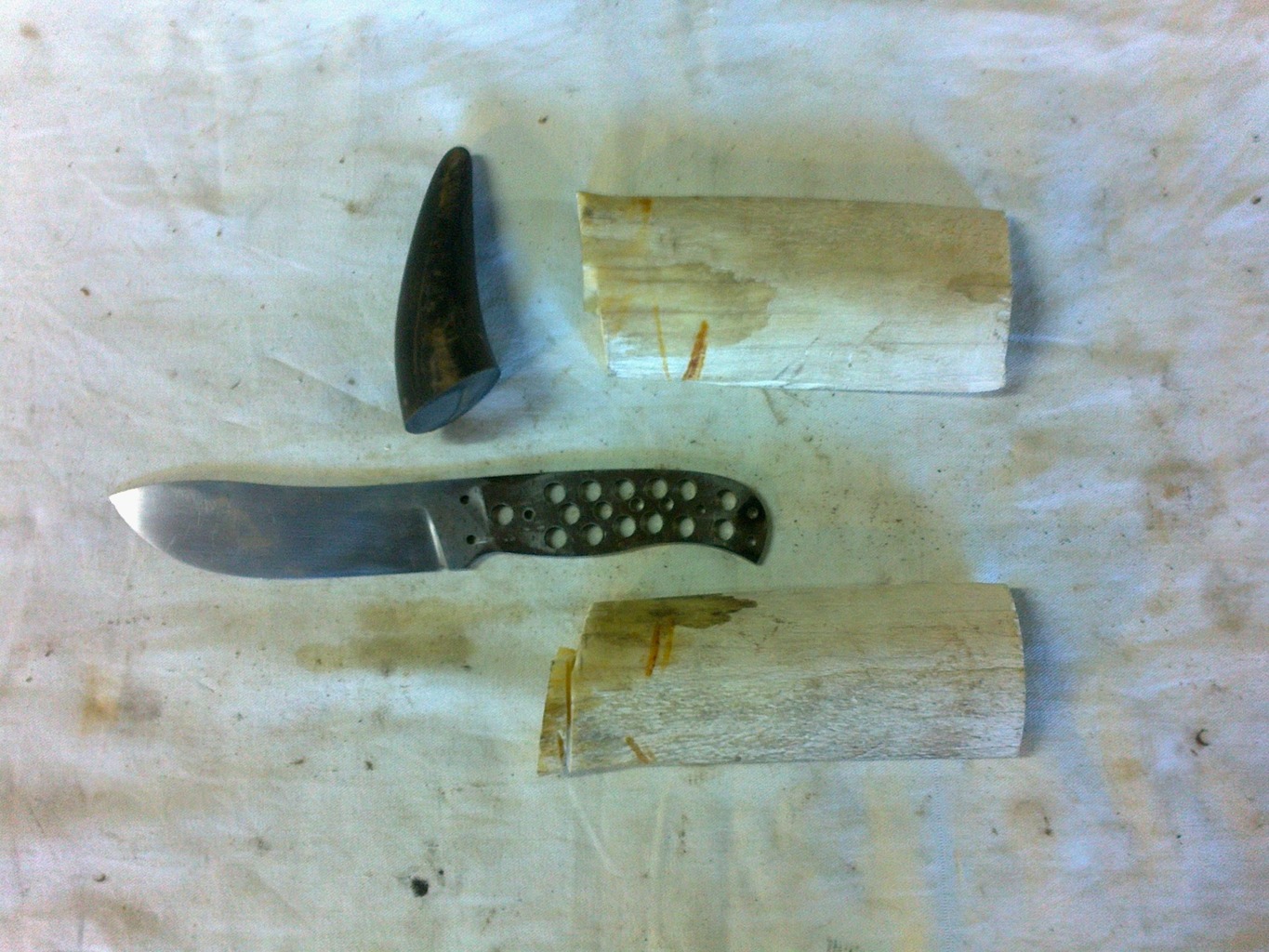 First chore was to grind a flat on the bottom of the horn so it would sit flat on the bandsaw then grind two flats on the tip so I could hold it with a pair of vice grips s I could run it into the fine hacksaw blade (24tpi) on the bandsaw. Then it was a case of shaping it while the two sides were still together. The pin holes were drilled and the two halves could be seperated. I used a pair of pins that were fractionally smaller that what will be used for the final assembly so the holes stay nice and tight 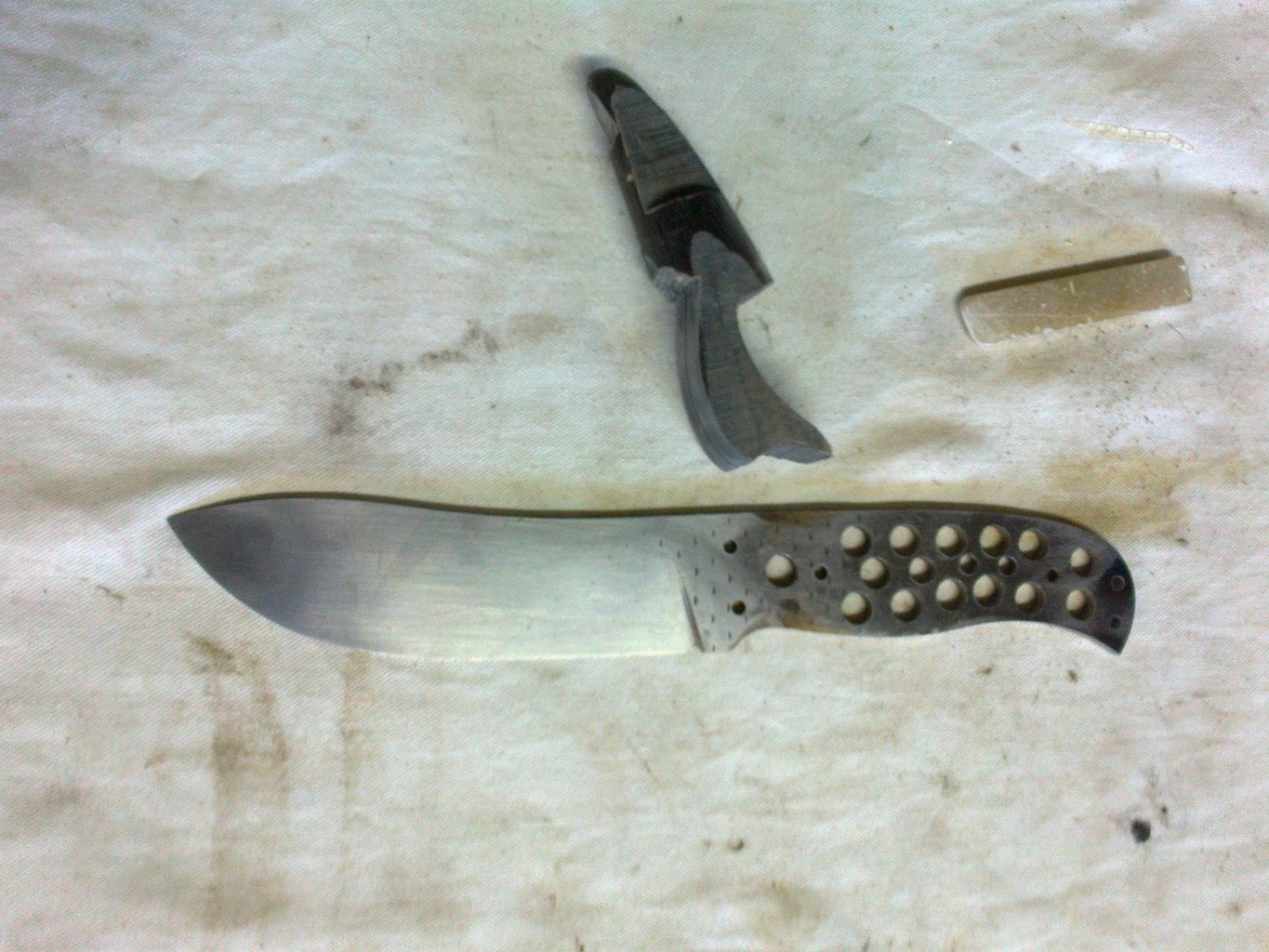 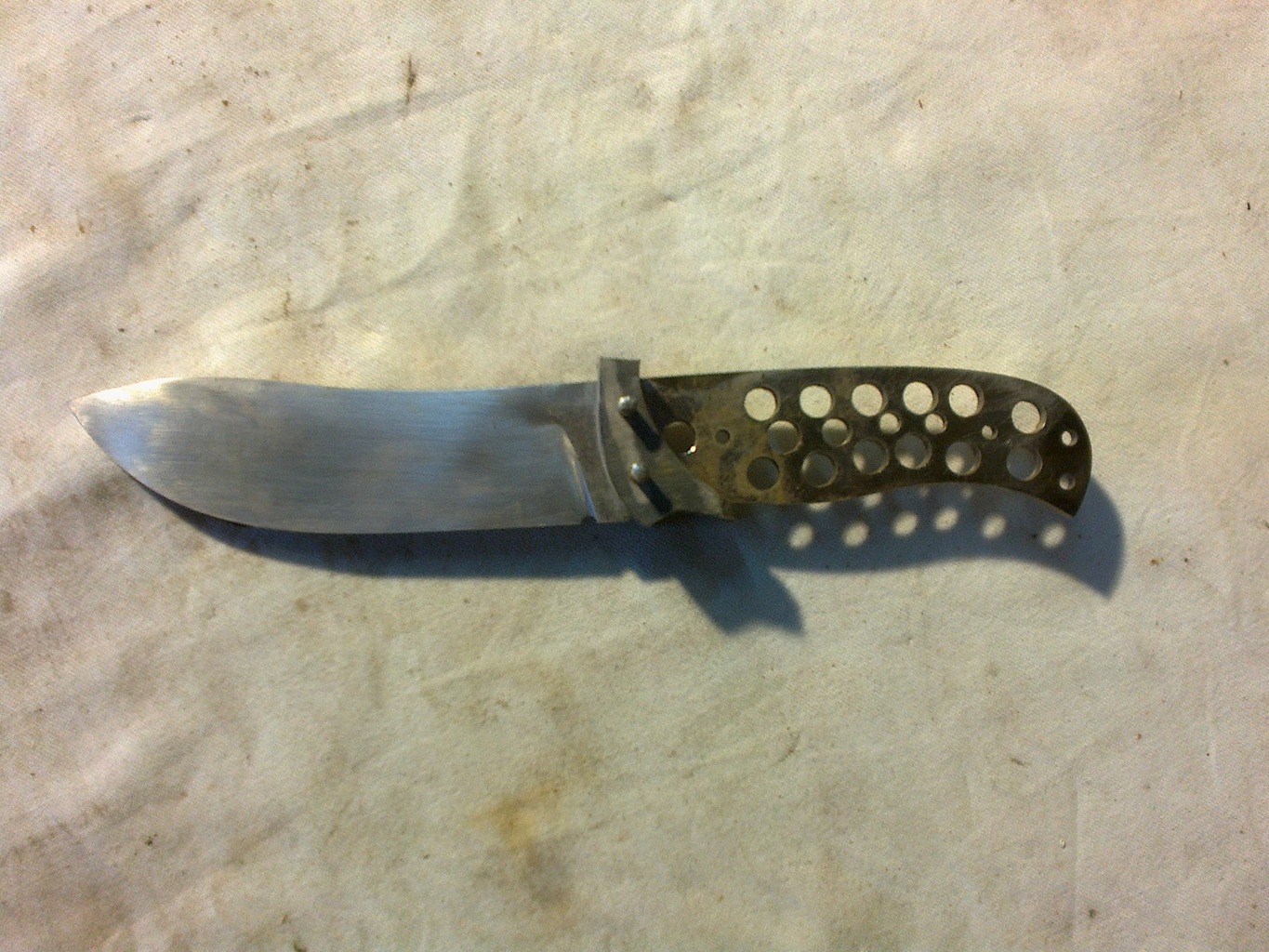 The next step was to grind a flat on one edge of the two halves of giraffe bone so I could run that through the bandsaw as well. For this I set a fence and with one stick to hold it against the fence and another to push it through they came out the other end with a flat)sih) side that can then be rubbed on a piece of sandpaper on the bandsaw bench to perfect the face . 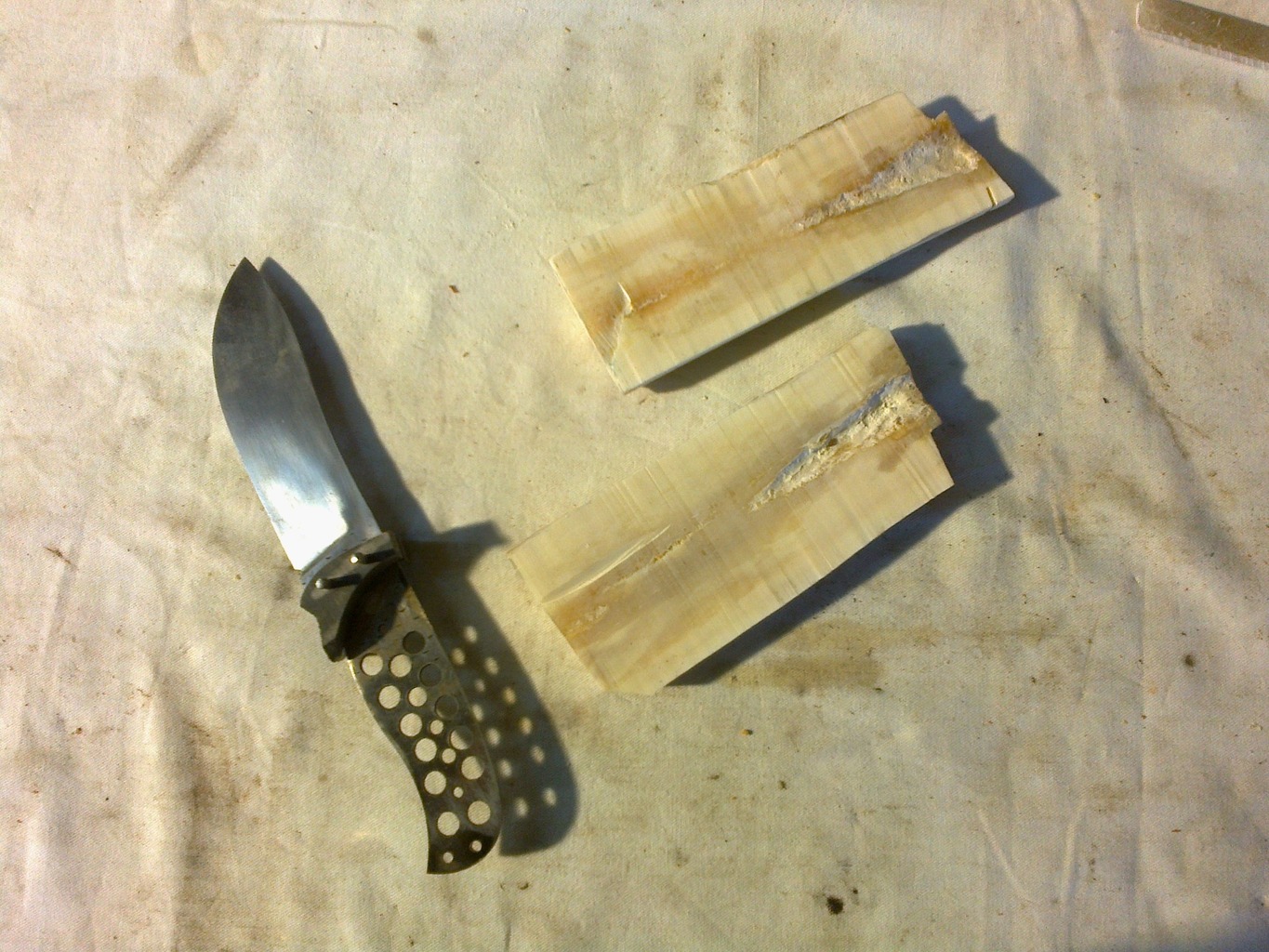 Thanks for sharing your progress.
I appreciate the skill it takes to do this.

You are a man of many talents Von Gruff!

Can't wait to see the finished product
Keep on rockin' in the free world.
I have spent most of my money on women and hunting, the rest has been wasted.

A couple of hours after lunch saw the handle slabs shaped to fit the buff horn bolster curve. A generous margin arround the edges and even the bolster curve is not a perfect fit at this stage. They wont get the final fit untill after the blade is heat treated and the bolsters are fixed in place. 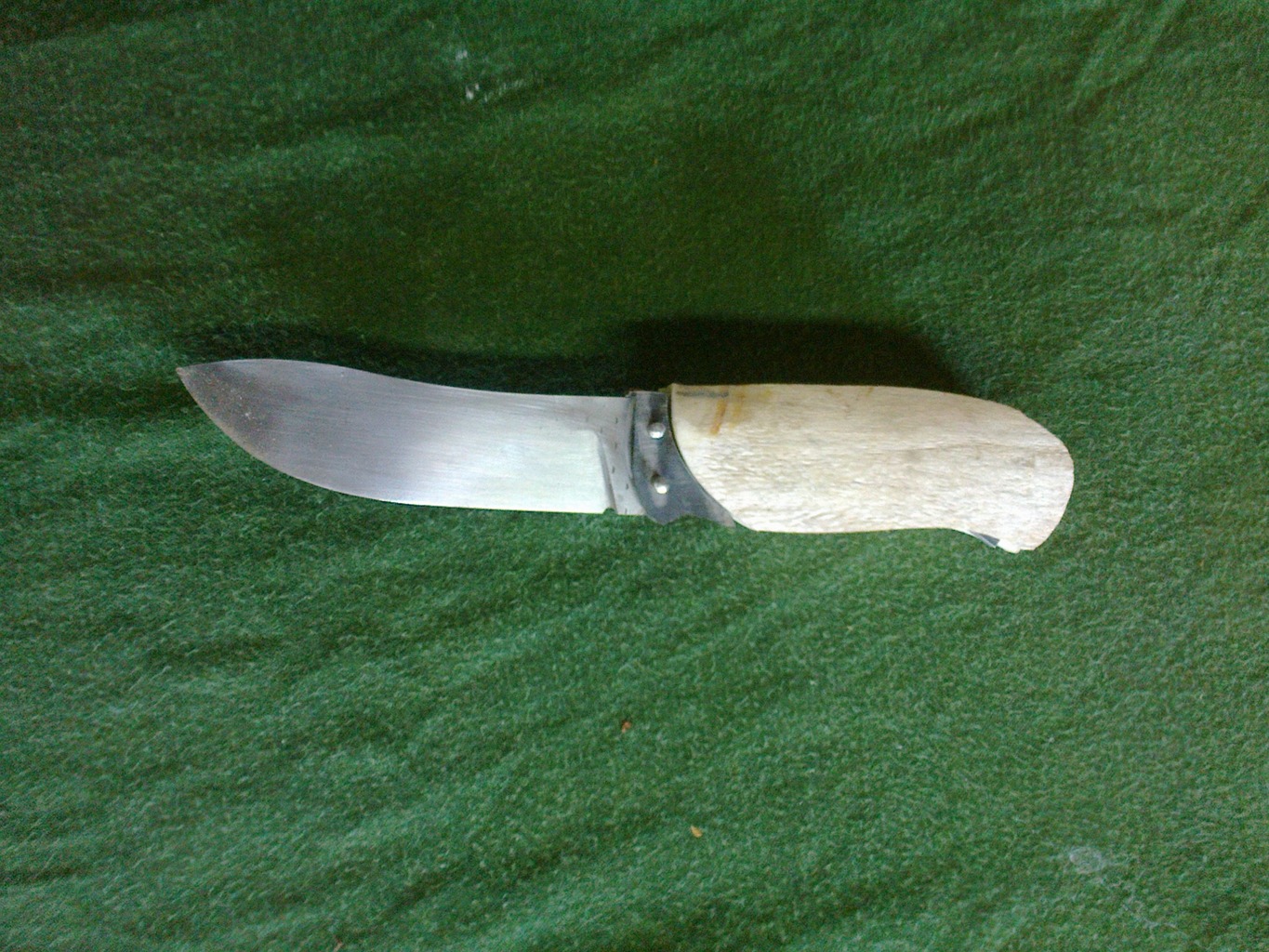 It will probably sit like this for a while as it is a bit warm to need the fire yet. Unlike the professional makers I do my heat treating in the house fire and while it may not have the temp control like the electric heat treat ovens it does give me good heat and has treated a few knives now that all seems to cut and keep an edge.

Fantastic, we watch and learn all the time.

Excellent Von Gruff, the giraffe bone looks great ...I was amazed how solid the giraffe bone is....I really am looking forward to use it in a knife project as well...keep uploading the photos ...there is a chance of getting nice warthog tusks as well ..will send two nice ones to you again..

Cool, thanks for sharing and documenting the process
John 3:16
P

Thats just great! Must be a very satisfying feeling to build your own knife. Thanks for sharing and keep posting updates

It was way too hot here yesterday but I lit the fire and got the blade heat treated. At the same time I annealed another file so I can make a decent boning knife. Then I ground the griaffe bone thinner from the marrow side so I could keep the aged drying fissures on the outside of the bone which I want to retain in the finished handle.
I will get the blade polished this afternoon and fix the bolsters in place. I have drilled right though the horn but I will have to set the brass pins 3/19 into one side and let them set before fixing that side to the blade with 3/19 of pin through the steel for the second bolster to fit to. That way when the epoxy has all set I can fill the rest of the hole with black epoxy so that when it is all shaped and polished the holes should just about dissapere. That will look better to me than seeing the ends of the brass showing through the black. I will be able to do the handle slabs with hidden pins without the through holes though as I will have the bolster edge to hold the bone against to drill the pin holes.
Last edited: Mar 21, 2016
Von Gruff - website www.vongruffknives.com - email vongruff@gmail.com
My African Knives: https://www.africahunting.com/threads/my-african-knives.26296/
AfricaHunting.com Hunting Knives: https://www.africahunting.com/threads/africahunting-com-hunting-knives.40515/
The Von Gruff JT Ranger Knife: https://www.africahunting.com/threads/the-von-gruff-jt-ranger-knife.42359/

Love the design. Seems like it would just be an extension of your finger. Just what I want in a skinning knife.

What a talent. I can't even sharpen a knife prioerly, and not for a lack of trying to learn over the years!
HUNTERS make importation bans work!

One thing you can do that helps to keep a co0mmon angle for you stoning the blade primary angle is to set the stone at the angle as it is much easier to keep the knife vertical than it is to get the same angle each time let alone each stroke. 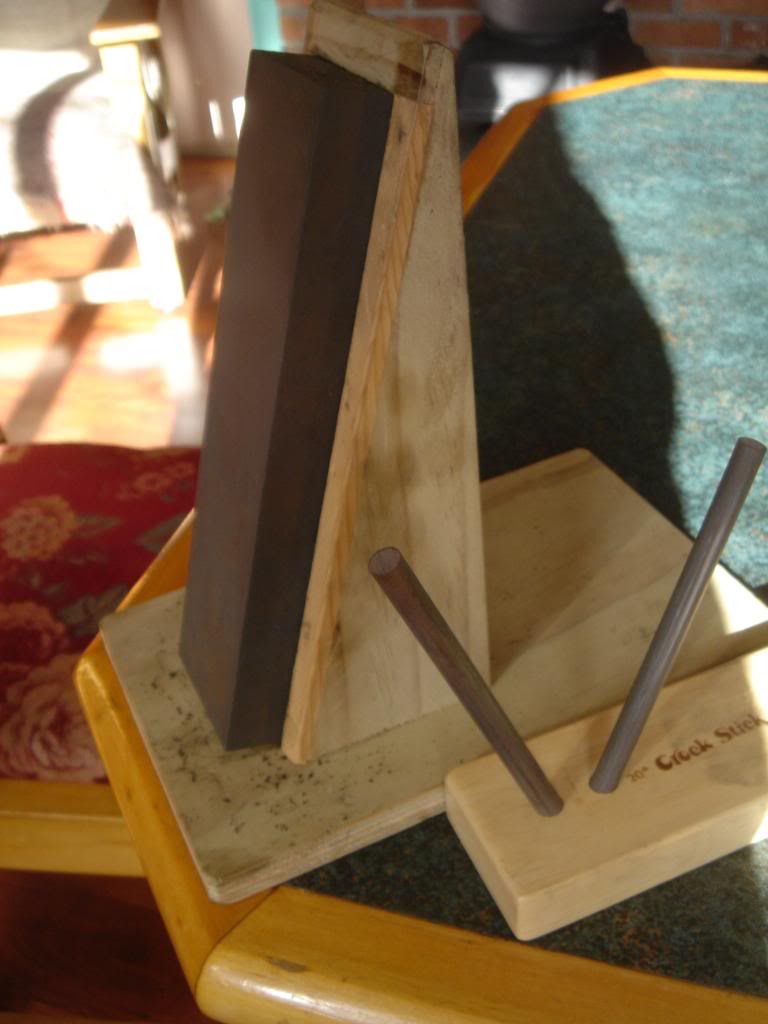 Here you can see that you set the stone at a degree or two flatter than the crock sticks so they can touch the edge only. This allows for a longer time between stonings 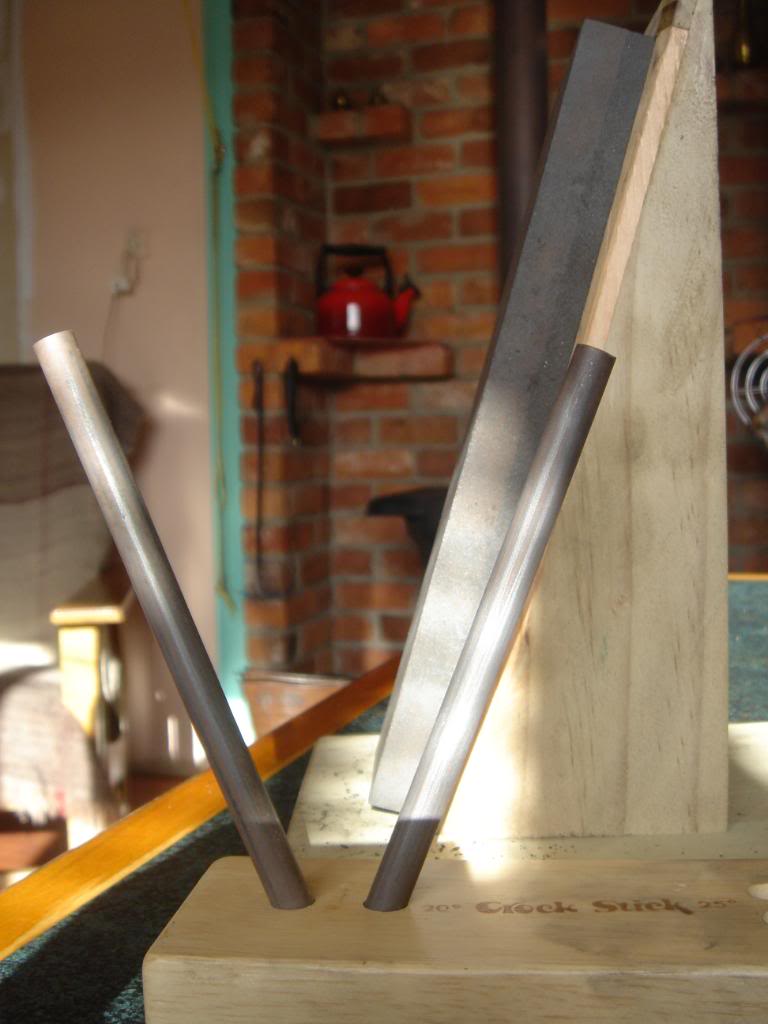 Then a simple set of crok sticks will give it the final touch up on the edge which can be maintained in the field with a steel. I have screwed the stone support to the corner of my work bench so I can use either side with the same ease.

Handmade or Custom knives in Johannesburg or Windhoek???

Von Gruff Made Me Post This: Skinning Knives from Sawmill Blades

Our conversation record is lost on my end. I'm not sure what happened.
You sent a message last Thursday that you had received my payment for the Ruger 9.3x62.
Can you give me an update about shipping please.