MOZAMBIQUE: My hunt with Safrique in Mozambique

This was written after my first trip with Safrique a couple years ago. Im headed back over to Mozambique in Oct. to film a buffalo and leopard hunt for my hunting show with Safrique once again. I will post an update on how the trip went as well:

Wally Returns from His First Safari Hunt from Mozambique with the great people of Safrique! 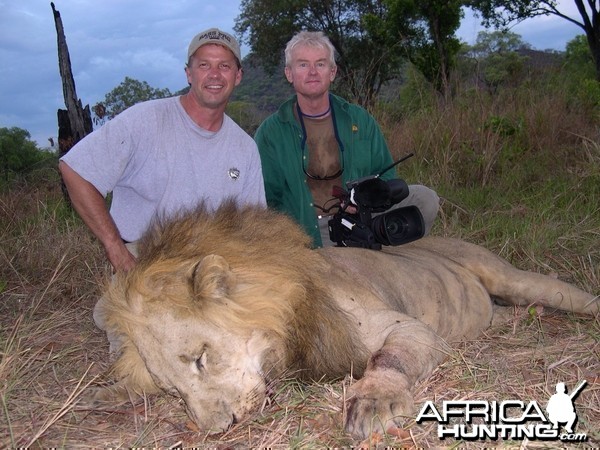 I just returned Home from my first Safari in the Country of Mozambique, and WOW. Ive hunted in Zimbabwe 7 times over the last 15 years, so I was excited about this trip. I was contacted by Safrique, Lda. about one of their new exclusive hunting concessions in the Niassa Province. Its the very Northern part of Mozambique, just across the Rovuma River from Tanzania.

I was the very first Hunter to hunt this new area with SAFRIQUE. Its so new, they were actually cutting new roads into the areas we hunted while I was there. We also came upon areas while hunting that they we were seeing for the very first time. Marking them on the GPS so they could cut roads into these areas later. I felt a little like Lewis and Clark some days! 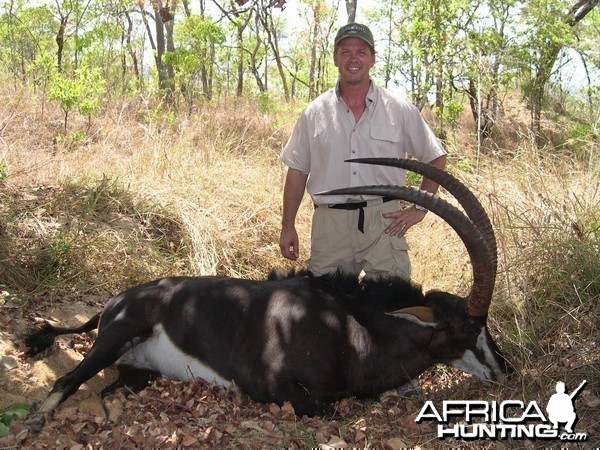 This is a true HUNTERS HUNT. You have to work for the game, but the Trophy Quality is worth it. I took a Beautiful Lion, Sable, Zebra and Warthog.

I saw Waterbuck, Kudu, Eland, Reedbuck, Lichtenstein Hartebeest, Hippo, Duiker, Crocodile, Elephant and Leopard. I had an opportunity on many of these. But I was busy chasing down the Buffalo Dagga boys. They gave us a run for our money, getting close on a couple occasions, but they busted us each time.

I cant say enough about Matthew Muns and his staff at SAFRIQUE.

They did a First class job. The camp was great, the food was Fantastic, and my PH Ian Rutledge and I had a great time hunting together. SAFRIQUE offers Hunts on all of the Dangerous game on their place, Elephant, Lion, Buffalo and Leopard. This is truly the African Hunting Experience. You will typically do quite some walking after you have cut sign. But generally its not difficult, depending on what your after.

I was impressed how all the details were taken care of, especially having Matt meet us at the airport in Maputo and making sure everything went smoothly. I have been on enough of these trips to know, this makes a very big difference especially when traveling that far. Its also obvious from the start, how hard every one works to make sure the Safari is the best Hunting Experience you will ever have, and things go as smoothly as possible.

Theres nothing like Africa. And to be able to Hunt in an area that has never been commercially hunted in the past, I thought would be, "to good to be true". The results speak for themselves. I highly recommend this Hunt to anyone looking for not only Dangerous and Plains game, but the experience of a lifetime.

Look forward to your hunt report after your October hunt! Moz seems to be the star on the rise as Zim loses some of it's shine.

Perhaps I'll see you in a few weeks when I travel to Bristol?

My NASCAR duties are done for the year, Im now doing the Indy Car races for VERSUS.
I will not be in Bristol unfortunately, but have a great time! Bristol is the King of all short tracks!

Thanks for the hunt report, WDracer!

Welcome to AH...we will be looking for ward to your new report.

Thank you for your report it looks like you had a great time.

if you go the outfitter button and fill out a report on your safaris.

Wally, Thanks for posting your hunt report and looking forward to hearing about your next Buffalo and Leopard Moz safari!
Jerome Philippe, Founder of AfricaHunting.com

Congrats, that are superb trophies!!

My NASCAR duties are done for the year, Im now doing the Indy Car races for VERSUS.
I will not be in Bristol unfortunately, but have a great time! Bristol is the King of all short tracks!

Will do. This is my 3rd year in a row for the August race. It seems it's the only way I get to see one of my JGR drivers win! It always seems a close but no cigar situation here in Phoenix.

Great animals, congrats on a great safari, and welcome to the forum.
N

Wally, welcome to the forum from a long time NASCAR fan - I am a Jr. fan more specifically - hanging on to the hope that he'll get a win again soon and stay in contention for the Chase. I love to watch/listen to you guys on TNT.

Also, thanks for the hunt report above and can't wait to hear about your upcoming safari. Those are some nice trophies above too. Good luck.

Great report Wally, Wish I had your money
D

Unfortunately, as of August 2011 - we have just returned from a 10-day hunt with Safrique and found them MUCH different =
including NOT returning >$6K unused trophy fees,
NOT paying their PH's,
Not returning Phone calls, emails &
the website is blocked to PAST hunters.

Do you have a written contract for your Safari?
D

Yes, it's the link. My personal email that I have been commmunicating with blocks the access. I have been able to use another email to "get organized". Yes my wife and others can get on website but not me as the paid hunter, very strange. All phone calls are immediately to voice mail or continuous busy signals for Matt & Nick. I have a receipt for the refund due given to me by Matt @ Maptuo airport but more concerned about crediblility and the way they treat their PH's & operate the outfit for future hunters. Poor business.

Im sorry you had issues, I have spoken with SAFRIQUE and have promised me they are addressing these issues with you. My experiences with them so far as they have been very fair. Please let me know how things work out.

Matt Muns promised he would handle the refund of our excess Trophy deposit as well.... True to form no communication and no refund. I can not say it enough or loudly enough this operation is Fraudulent, Shady, and without Veracity.
F

I have a question about your quote, "I was contacted by Safrique, Lda. about one of their new exclusive hunting concessions in the Niassa Province."

Did you pay for the entire hunt with Safrique or was it a freebie?

I was contacted by Safrique because they wanted me to do some episodes on my hunting show on there new place. I can assure you it was far from a "Freebie" And they did an excellent job on my hunt.
F

Did the episode ever air? Episode title? I would like to see it. Thanks.
You must log in or register to reply here.

MOZAMBIQUE: My Hunt with Safrique In Niassa Reserve Mozambique Oct/Nov 2011