My wife and I went to hunt Elephant/ Buffalo with Mashambanzou Safaris in the first part of June.

Grant Taylor the owner and Boet one of his PH's met us at airport, one of there assistants got us through customs in a breeze. Vicki and I hopped in the Landcruiser with Boet and headed for Muanza that is the main camp. Muanza is a really nice camp. Good rooms, nice deck looking over the river, and a good cook staff. The first day Vicki stayed at Muanza with Sarah, Boets wife, and Boet and I headed for a Fly camp 2 hours away to hunt the Ele we pulled into a village and one the villagers and Boet had a conversation, Bad news the Elephant had left the concession. We started going after Buffalo thinking the Ele's would return in a couple of days. Hunting the Buffalo for seven days in 10'-12' tall grass or in thick jungle we had 3 encounters with the Buff but no chance for a shot (by the way no sign of Ele's) on the seventh day we finally caught them feeding, climbed up on a Termite mound, this is where I want to change the subject but I won't I shot a nice Bull twice and we were running short on Daylight he took off into jungle, we thought about leaving,coming back in the next morning, we didn't we bumped him under the dark trees and you probably have guessed the rest of the story we never found him. I thought I had 2 good shots in him but thats hunting. Burned up next day and a half tracking. Time is ticking fast now, I wanted a Nyala this is at Catapu and my wife wanted to shoot a Sable so we drive 4 hours from main camp of course it is opposite direction from where we were going to hunt Ele. Hunt Nyala 10th morning seen a nice Bull but to close to the Catapu Lodge that has other guest besides hunters. Vicki shoots a nice Impala that eve 1st kill of the trip a little relief but I'm feeling the pressure big time now, we were going to hunt one more time in the AM for Nyala if it didn't happen we were headed to Sable camp. About 5 minutes left in my Nyala hunt on the 11th day I killed a nice Bull I'm breathing easier now, we seen a lot of plains game at catapu and also at the Sable camp but we were looking for specific animals, ended up no Sable. The 12th eve I shot a couple of Baboons and a Duiker for a Leopard hunter coming in a couple of days. I like shooting Baboons.

My wife & I had a great time they took care of us well we got along with everybody real well but on my way home I started replaying the hunt and I was disappointed I never got to hunt the Elephant. Grant, me and my booking agent Theo Blignaut emailed back and forth for a couple of weeks talking about the Elephant. Grant emailed me last week and said if I could make it back in November he would take me Elephant hunting no day rates for 7 days. GUESS what I'm doing in November yes I am headed back with better results on Elephant this time.
I told Theo it's easy to be a great Safari company when everything goes according to plan but when it doesn't you find out who the good guys are. Grant Taylor and Mashambanzou are an upstanding company. 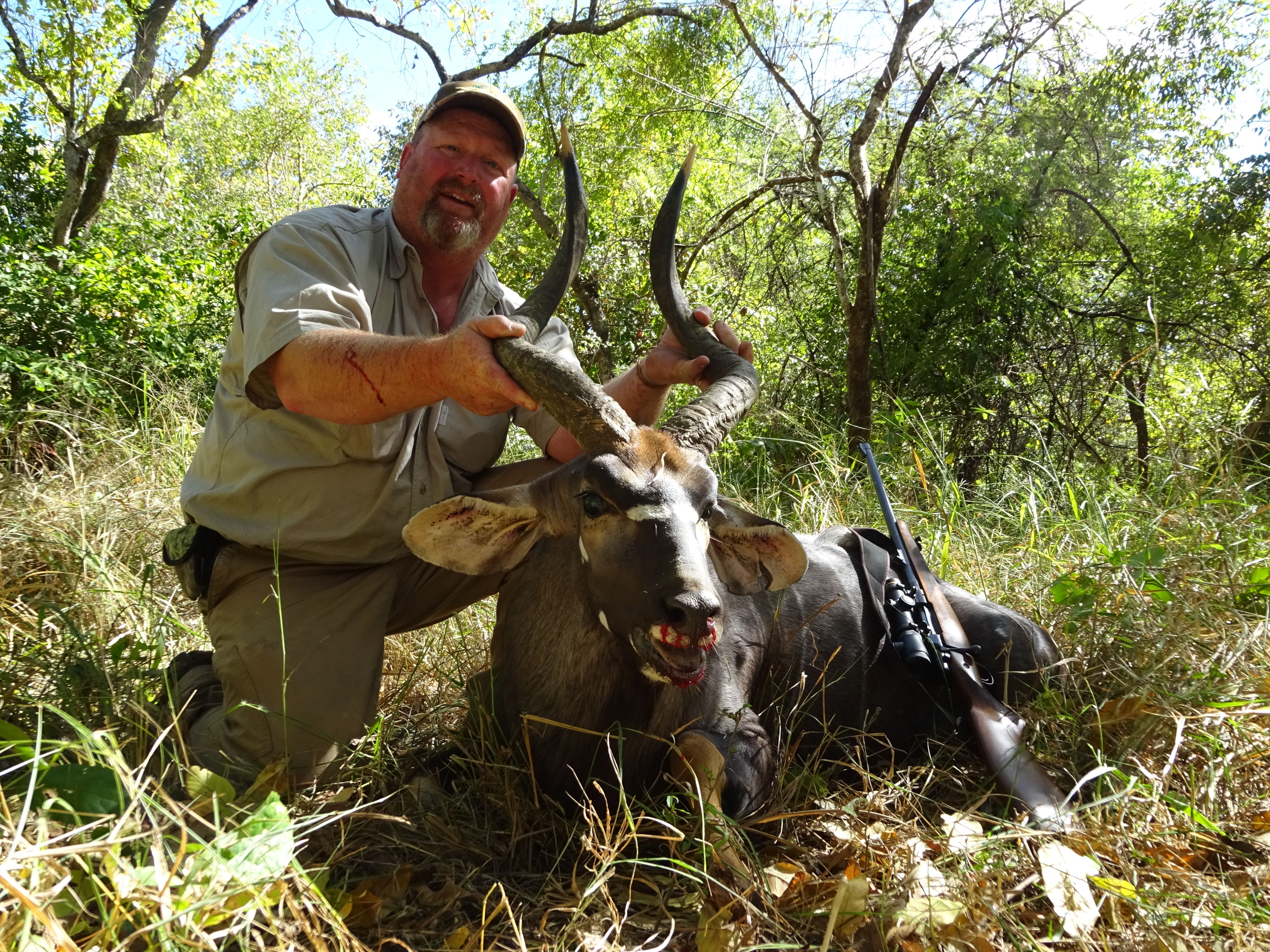 Tall reeds hunting Buffalo is nothing but work. Hard work.
Too bad you did not find him.

Glad Grant is letting you come back to play.

Be prepared for some heat when you back.
Good luck on the Elephant hunt, I am expecting pictures. So do not disappoint me.

I love the shape of the horns on the nyala. Those wild Africa hunts are hard work sometime. Good Luck in NOV.!

I live out west in Oregon, hunted a lot of steep Mountain country, I put some Miles on in the tall grass and jungle. Im glad those trackers can pack a lot of water I needed every ounce.

Thanks I love the shape of the horns also

My son and I are headed out with Grant in the middle of August. We are both hunting buffalo and I also have sable and Nyala on the card. My son will be after almost any other PG he runs across besides the buffalo. My son will have his own PH so we won't have any down time. You have my sympathies on early season buffalo. The tall grass, leafed out bush, and heat make it all a very different hunt. I am hoping things will have dried out a bit and concentrated the bulls some by mid/late August. This will be my first hunt with Grant, and I am looking forward to it. A friend was with him a couple of years ago in late August/ early September and had a heck of a safari. Will let everyone know.

That is one very fine Nyala. And he didn't come off the back pasture of a high fenced game farm. The buffalo thing eventually happens to all of us. There is a Rowland and Ward class wildebeest with a .338 hole through him probably drawing social security in Namibia as I type.

The same friend dodged elephant a lot in September and was told the concentrations only increased as the fall progressed. I think you likely will have a good opportunity. And that really is a stand up offer. He doesn't get a nickel off the trophy fees - essentially working for the all too thin margin off the daily rate and tips. I could not wish you more luck this fall.
Last edited: Jul 13, 2014
"We sleep soundly in our beds because rough men stand ready in the night to visit violence on those who would do us harm" American Novelist - W. Churchill

Congratulations on the nyala.

Hope to see some nice photos of an elephant in November.

Congrat's on your hunt with Mashambanzou. Sorry the elephant and buffalo didn't quite pan out though. Grant is a "stand up" guy. Everyone on his team are first class too. I look forward to hunting with him again. Beautiful Nyala BTW. I saw a 30"+ bull at Catapu a couple of years ago when I was there.

we seen a 30" Bull at Catapu also only problem he had just been recently killed in a fight with another Bull.

Great nyala, Bashaw, wish you the best of luck with your ele.
You must log in or register to reply here.