I didn't know you were going to go ATP and ADP on us Brickburn...lol.

enysse said:
I didn't know you were going to go ATP and ADP on us Brickburn...lol.
Click to expand... 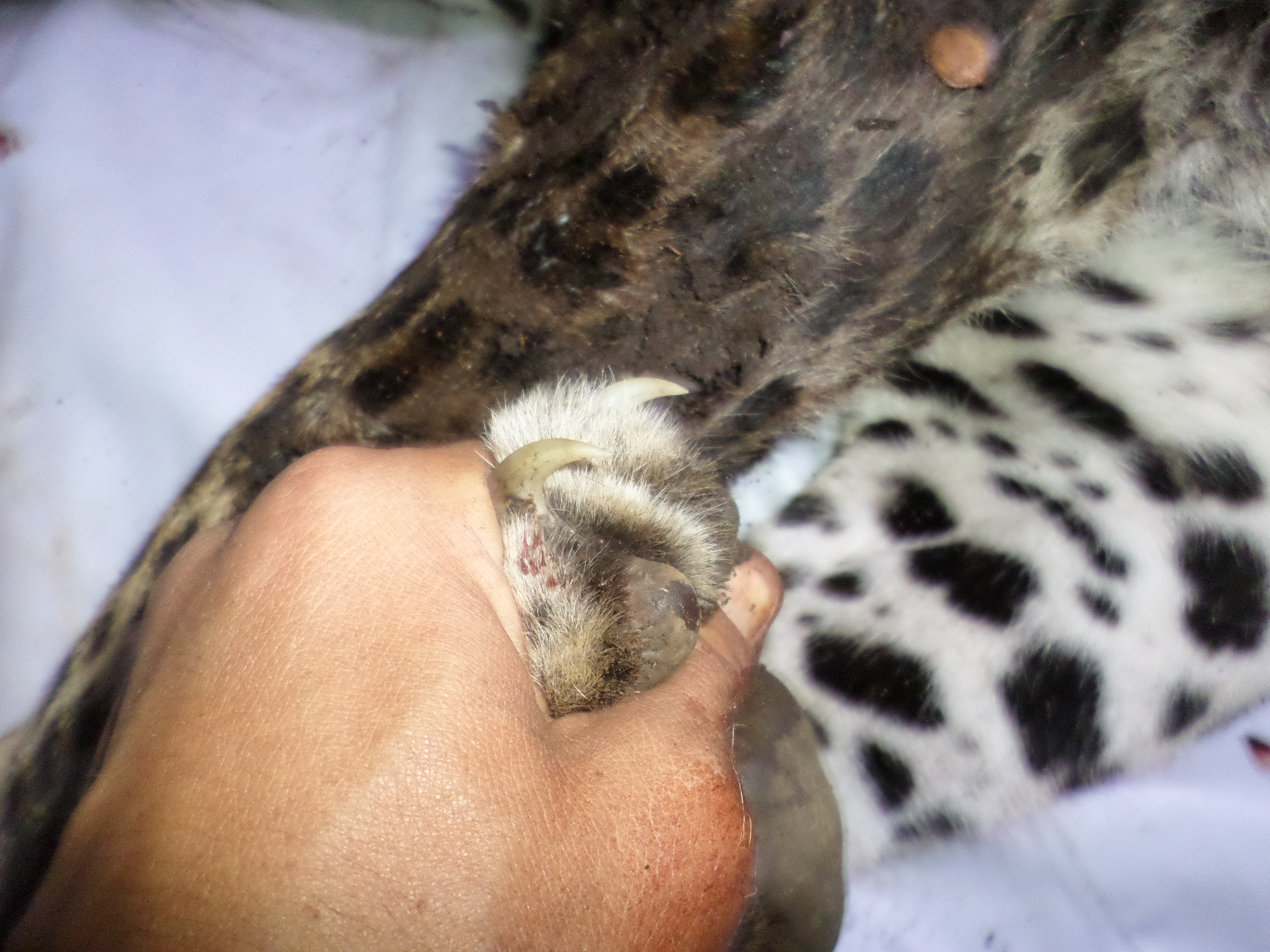 I think Kurt was more concerned about these ones! 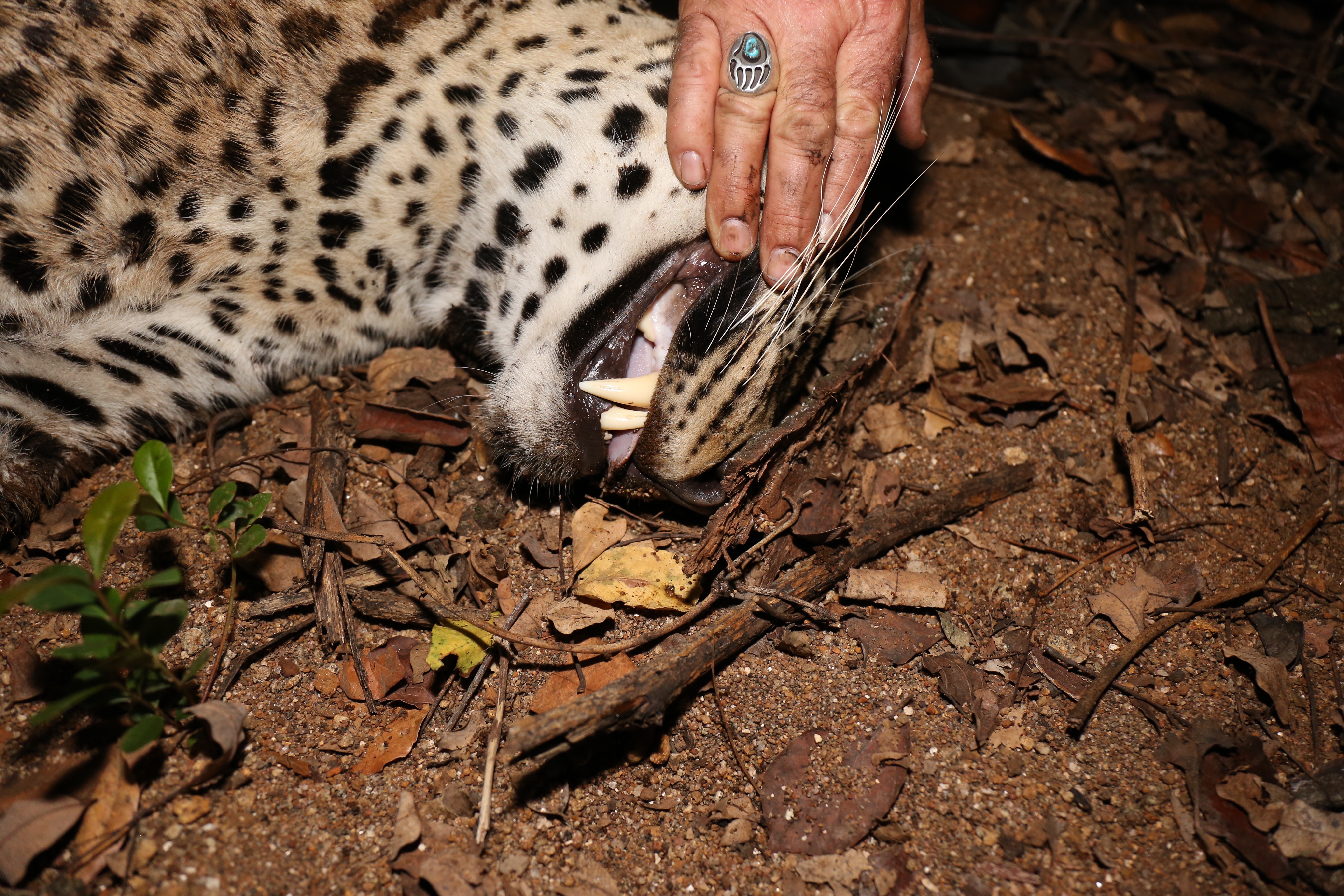 So that's what a dead leopard looks like?...lol congrats on a fine hunt.
Tommorow is promised to no one. Go live your dreams.
S

Yes, when they stop scratching and biting...
H

johnnyblues said:
So that's what a dead leopard looks like?...lol congrats on a fine hunt.
Click to expand...

Good to see you kept up your good humor!! Great trip report and incredible hunt...I have enjoyed riding along.

H50 said:
Good to see you kept up your good humor!! Great trip report and incredible hunt...I have enjoyed riding along.
Click to expand...

What else can I do.....Hate the fact that they stopped hitting bait one week prior to my departure, and maybe I should have done a "different" first time safari. But no regrets. I hope I can try again in 2017 not sure but I hope so.
Tommorow is promised to no one. Go live your dreams.
S

Johnny, one thing I will say for sure...there will always be leopards around, lets just hope the know it alls, don't close the importations.


The morning after I killed my leopard I woke up to bright sunshine. In the 15 days that I was in that camp, that was the only morning that I didn’t wake up before daylight, and that we didn’t leave camp before the sun was up. Simon later told me that we had celebrated the leopard hunt until almost dawn.

So the plan now was for two trophy sable bulls. Wayne and Simon would go one direction in one bakkie and Simon and I would go out in the other bakkie. We were both seeing groups of sable, but the big bulls kept eluding us.

Wayne was hoping to hunt his sable with his bow so he didn’t bring his rifle into Mozambique. Simon had a .375 H&H rifle in camp that Wayne had shot a few times at the range the first day, but he was not completely confident with it, and he had passed on shots at several good bulls that were out of his comfort range with that rifle.

Wayne had also only booked a one week hunt compared to my two weeks, so a day and a half before the end of Wayne’s hunt Simon asked me if Wayne could borrow my rifle for his sable. I said it would be OK, and that afternoon we all went out together to find a bull for Wayne.


Wayne has already told the story of his hunt so I won’t repeat it here except for this picture that I took of one very happy Canadian as he first puts his hands on his great Roosevelt sable bull. Congratulations to you Wayne. 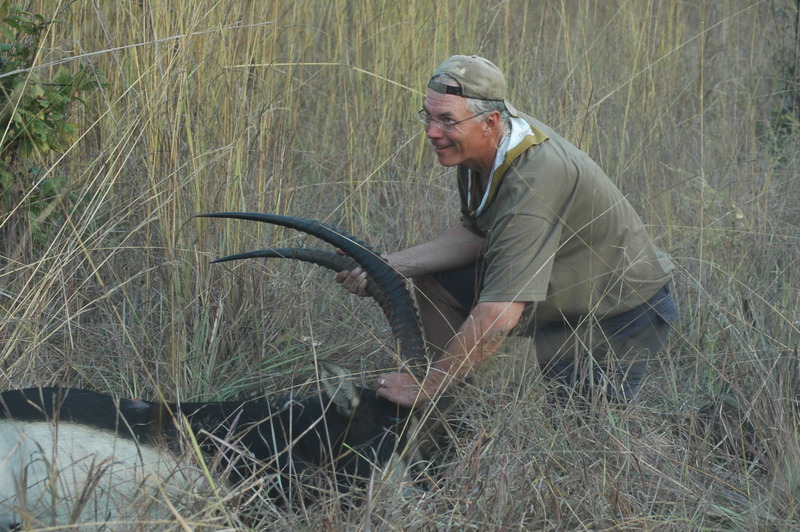 The next day Simon took us to the first major river north of his camp. This river is also about as far north that Simon hunts in his concession.

The view of the river looking downstream… 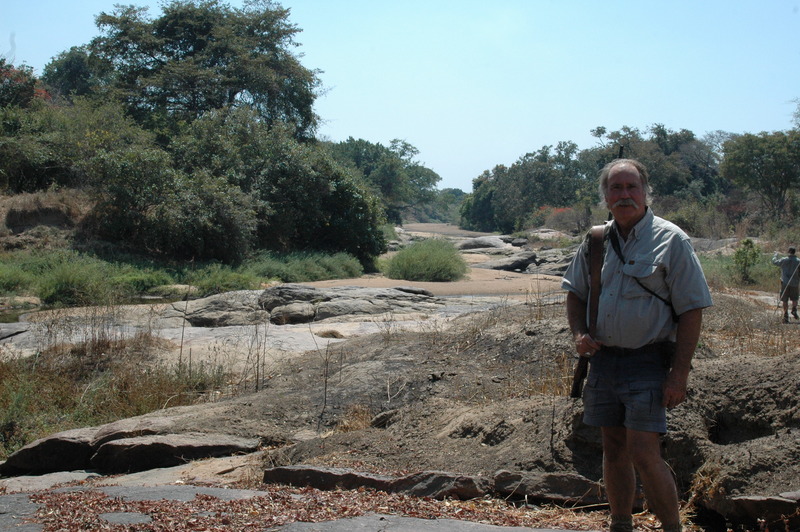 And upstream to the sandbar where we had lunch… 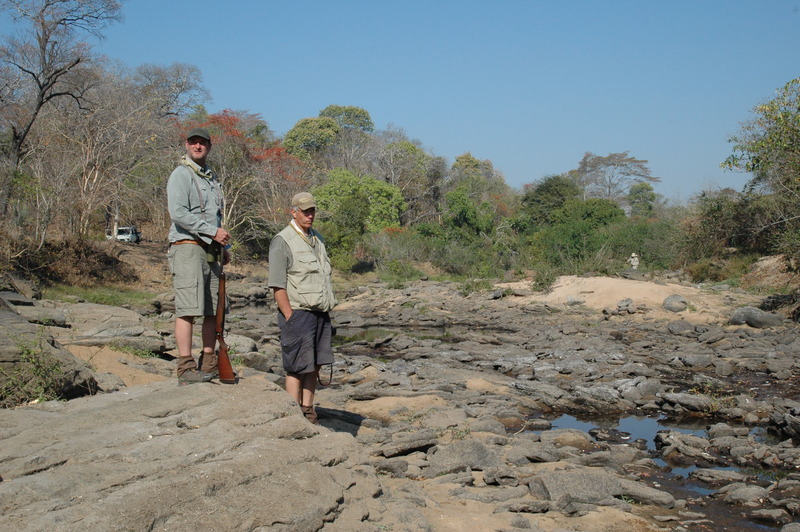 The river was very low with basically only a trickle of water running between the pools. When we first got to the river, Simon saw an oily sheen on the surface of one pool and said it looked like poachers had poisoned the fish there. They put some chemical in the water affects the gills of the fish so they cannot get oxygen from the water, but the chemical does not poison the meat of the fish.

Martin and I walked over to that pool, and saw quite a few small dead fish in it.

We then walked upstream a bit to a big sandbar with some shade on one side. We gathered some wood, and Simon started a fire so he could cook lunch. While we waited for the fire to burn down to cooking coals, we relaxed with a cold beer and enjoyed the river area.

In his report of this hunt, Wayne posted this picture that he took of a lizard that he found at our lunch site. 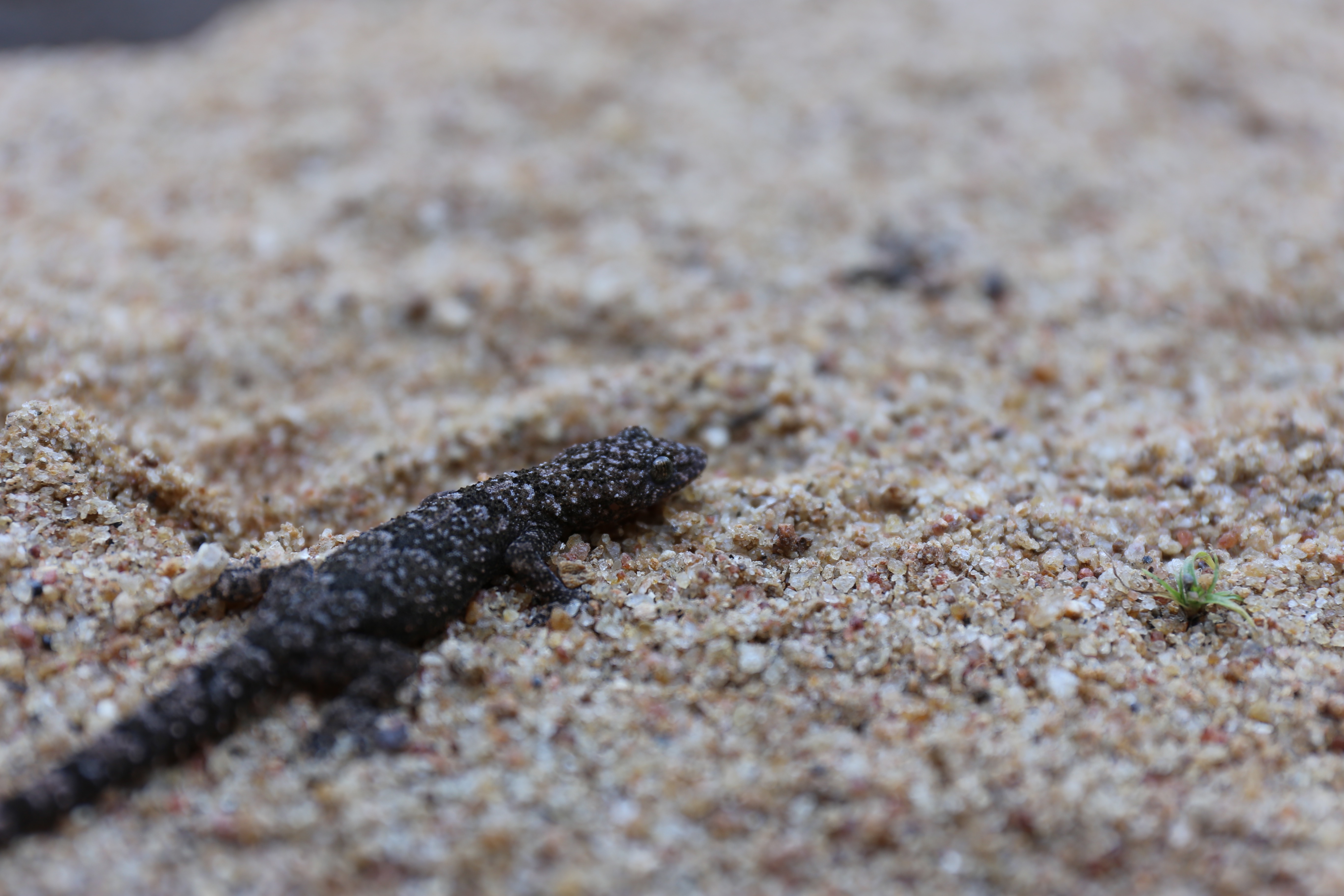 Well, here is the rest of that story showing our photo maestro deeply engrossed in his work… 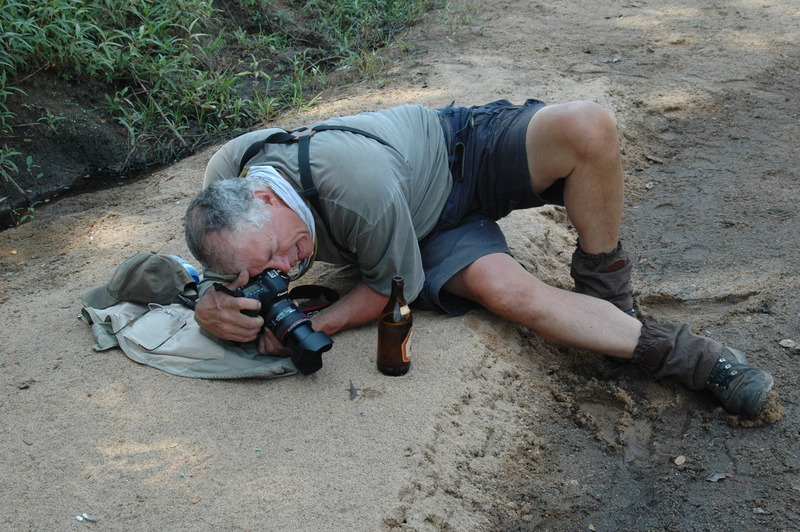 While Simon, Wayne and I were relaxing in the shade, Martin took off exploring upstream. After he disappeared around a bend in the river, I decided to join him. I found him about a half mile upstream, and he had found some fish traps that the poachers had left there. The traps are made from woven bamboo and reeds. Martin brought this trap back to show Simon and Wayne, and then he burned it. 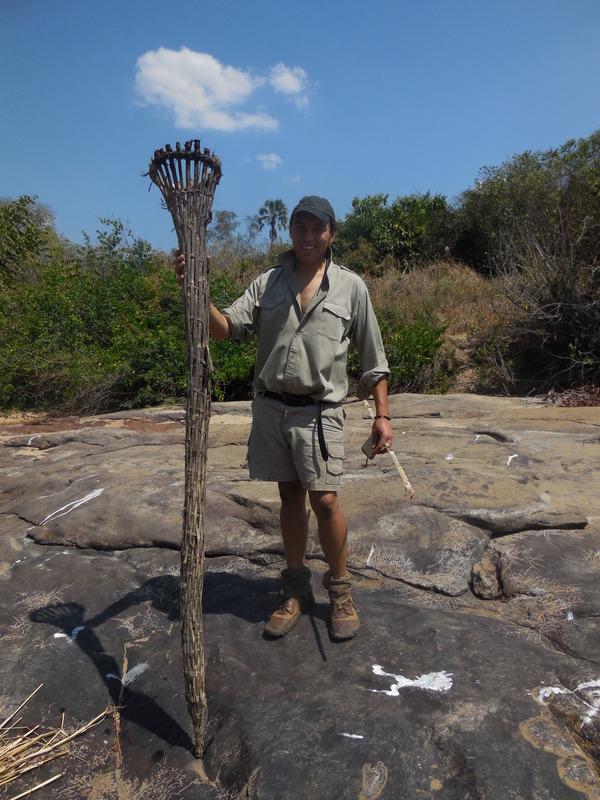 The poachers build a brush dam across the flowing water and stick several of these traps through the dam. The water flows through the trap, and the little fish swim into the trap where they are harvested by the poachers. 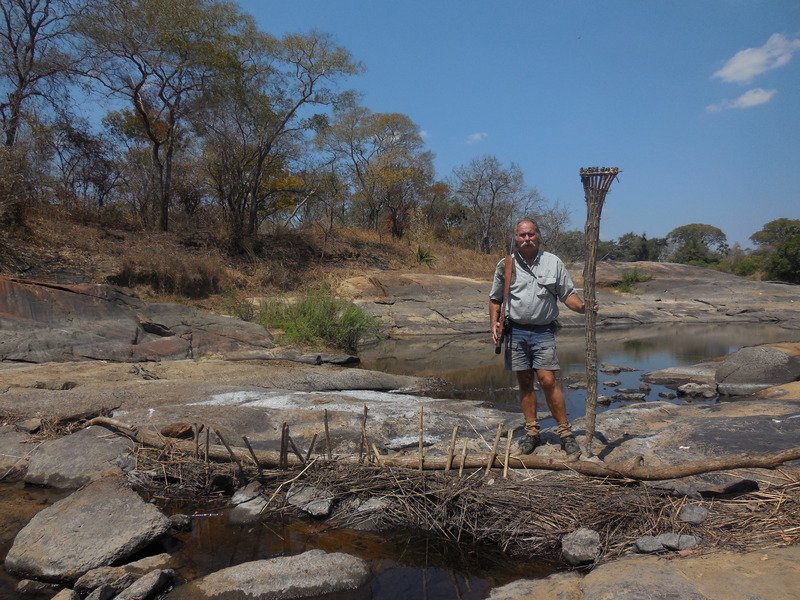 As Wayne mentioned in his report, long before we could see the lunch site, Martin and I smelled the sable fillets that Simon was cooking. The closer we got, the better they smelled and when we finally got there, Simon offered us a sample. The first fillet that I ate practically melted in my mouth and it was definitely the best slice of meat that I have ever eaten!

After that wonderful lunch, Martin and I walked about a mile downstream. We found quite a few more fish dams, each with up to a half dozen or so fish traps.

On the trip back to camp, we encountered several trees that the elephants had pushed over across the roads. One of the methods that Simon and his crews use to clear the roads is by burning, and by the smile on Simon’s face, I think that he enjoys this work. 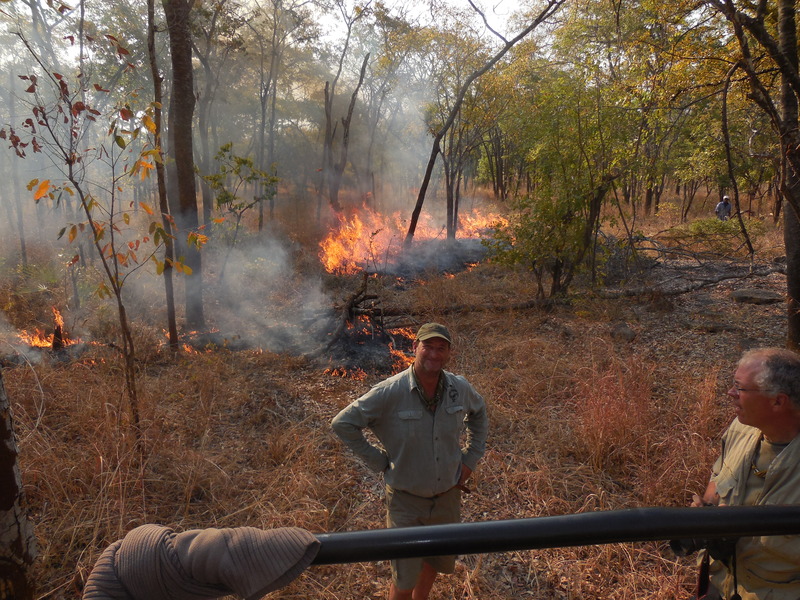 They also burn the vleis and forests reduce the height of the vegetation and to stimulate new growth. Some of the grass and other vegetation that they burn is 10’ or more high. It is very dry there and the fires take off quickly, but except for some burning logs or stumps, they will burn out overnight. 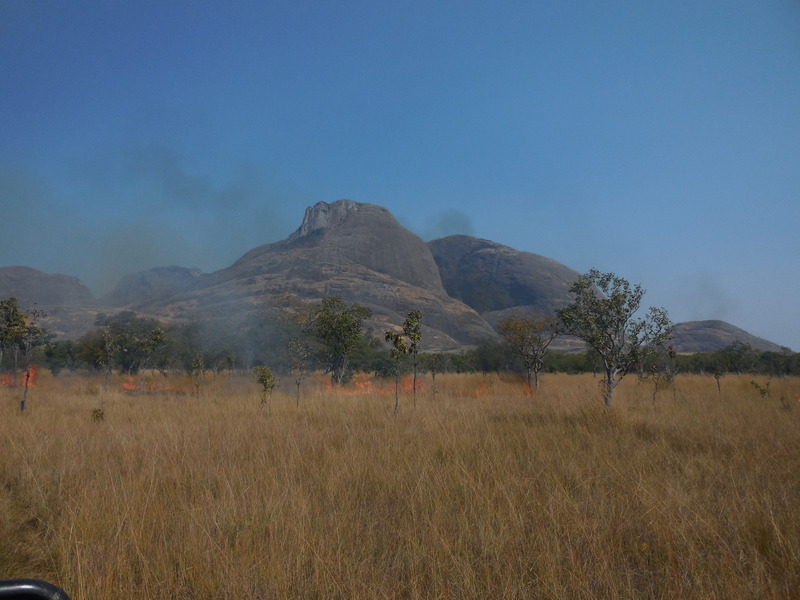 That was the end of Wayne’s hunt, and at 3 AM the next morning Vera drove Wayne and Simon to Lichinga where they would begin their flights back to South Africa.

I still had another week in camp to hunt my sable, and that report will be continued…

I certainly was a very happy hunter when I got my hands on the Sable and I agree it was some of the best tasting meat I have ever eaten.

Hilarious to see the other side of the reptile close up.

For the longest time I could not figure out why the stumps needed to be burned out and not just chopped out.
Finally dawned on me that they are Hard Wood. It would take a lot of work to chop them out. Build a fire and let the fire do the job. Smart work.

Wayne, you right about that hard wood, it sure is hard.
S

Good for building with. 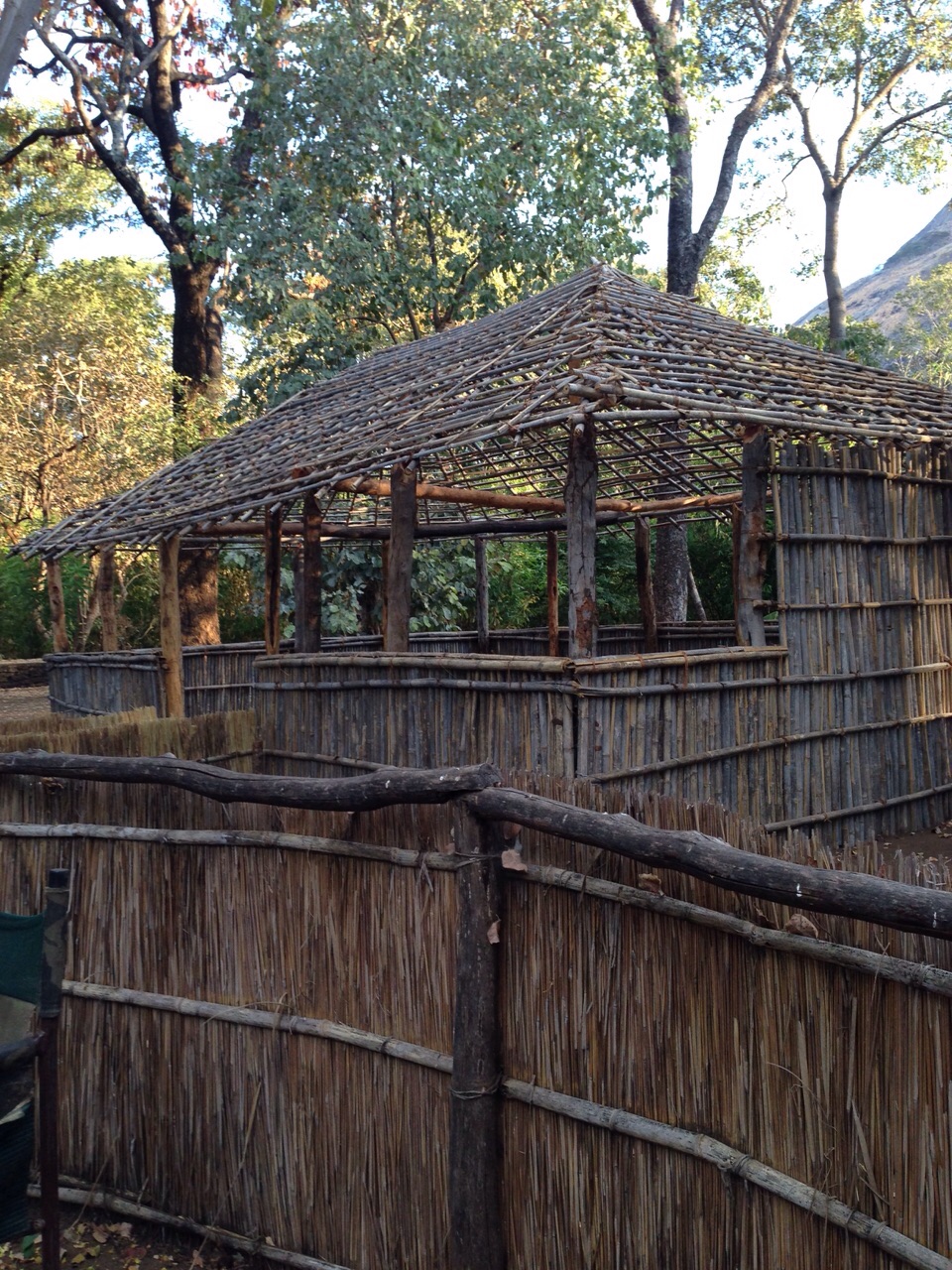 @BRICKBURN , if you look at your pic with Fernando holding the leopard, Kurt on the left...Martin on the right...Martin has also got the Captain Morgan pose down to perfection.

TMS said:
@BRICKBURN , if you look at your pic with Fernando holding the leopard, Kurt on the left...Martin on the right...Martin has also got the Captain Morgan pose down to perfection.
Click to expand...

Must have had a very good teacher to get it down so well. 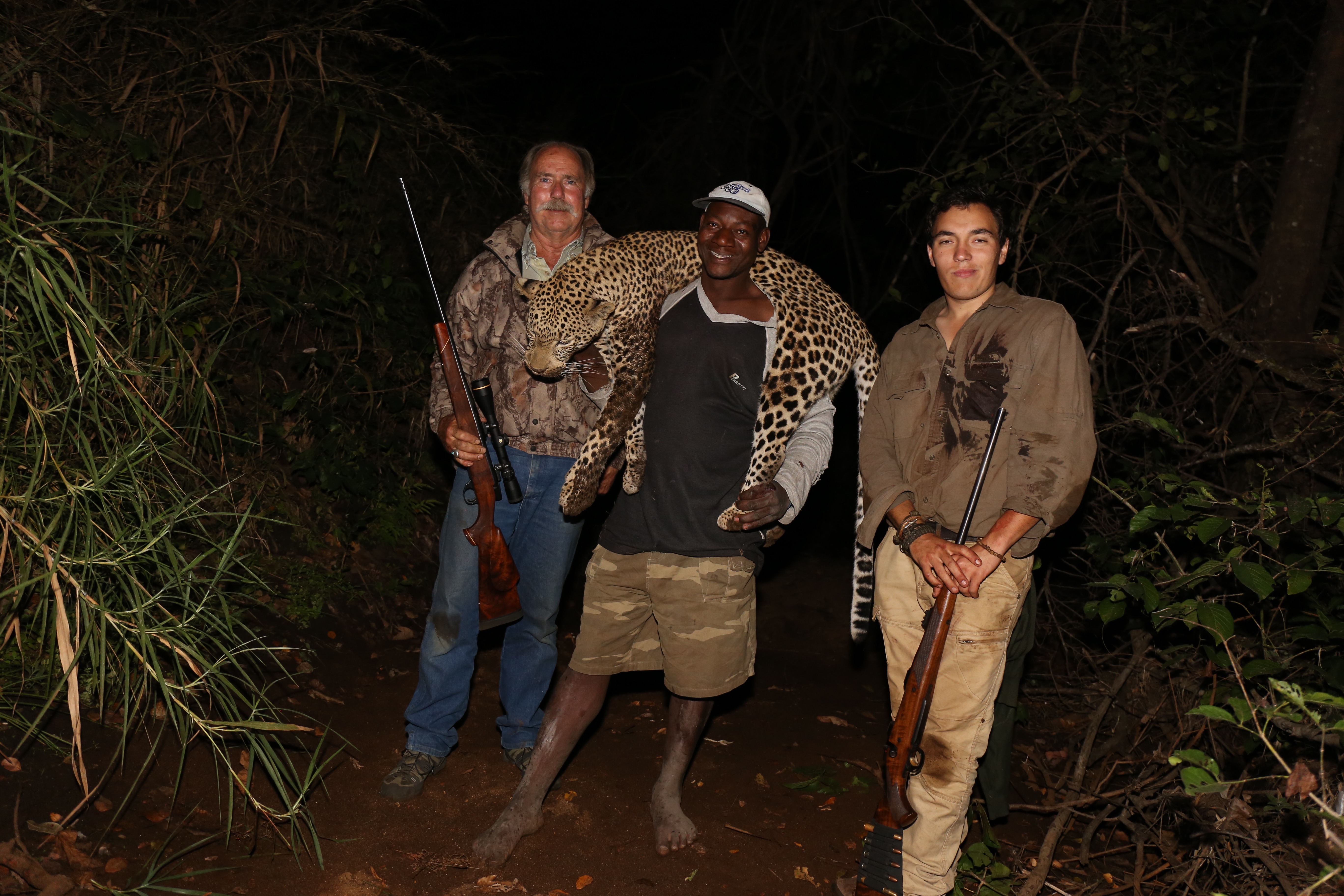