Me and my dad just returned from our second trip in a month in Mozambique. It all started two years ago in Zimbabwe. We were on our first buffalo hunt after I was able to convince my dad to go on his first buffalo hunt, something he has dreamed about all his life. The bug bit him, and we started making plans for a second trip.

The area we hunted borders Gonarezhou and is classic big game country. After months of preparing, practicing, packing, planning and some more practicing we were on our way from Pretoria. As we crossed the Limpopo river the excitement started building up again. After months of waiting, we were finally here. 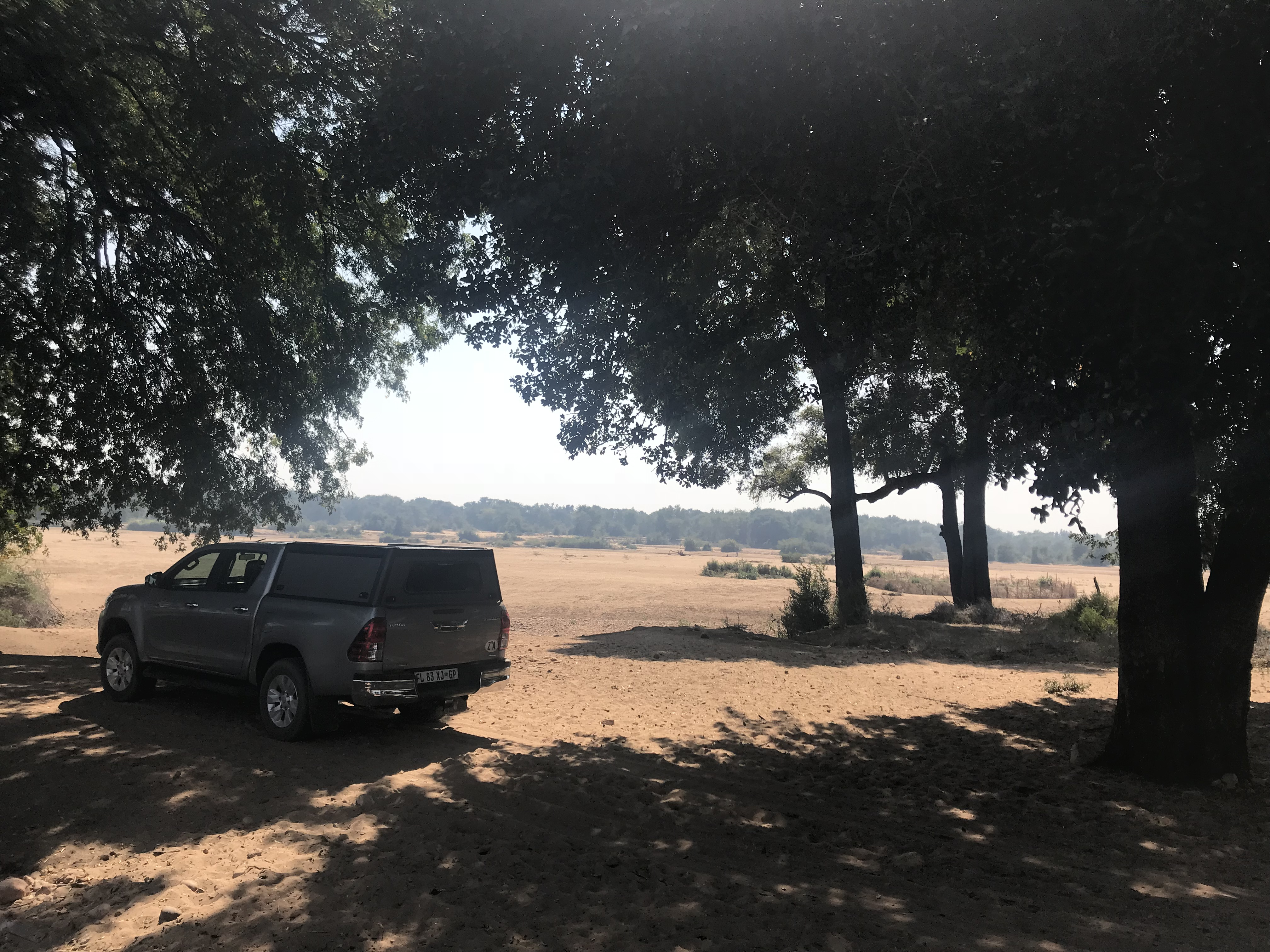 Our first trip, that took place in July, was extremely successful, except for the fact that we didn't get our buffalo. We hunted hard. We saw a ton of buff, but just didn't get that bit of luck you always need. We came close on a number of occasions, but something always bit us in the ass. The wind turned at the last moment, a cow walked in front of the bull down the alley we could shoot, the buff was still too young. We went in search of an old bull, a bull with character whose breeding days was over. We got close to scrumpet bull, a bull with broken down horns. It is the type of bull we would take in a heartbeat, but the wind busted us and the bull crossed the border into Zim. We ended up hunting an extra day to get our bull. Unfortunately it wasn't meant to be. All in all it was a great hunt. We gave our everything. My dad is 67 and he's going in for a knee replacement this December, but not once did he complain. In 7 days we only saw the camp during the day once, and that was for lunch. We racked up the miles! He's one tough bastard.

So we made plans to go back. We found a week that suited both me and my dad, and last Tuesday we were back on our way. Each day started out the same. Up at 4, get some coffee, and go check the waterholes for fresh tracks. Wednesday morning, our first day of hunting, we found fresh tracks of a lone bull. 09:15 that morning we found him. But as luck would have it, we found him laying down in the thickest stuff you can imagine! Just as we made out the silhouette of him the wind turned and he went crashing through the bush. And... it was our broken horned bull! 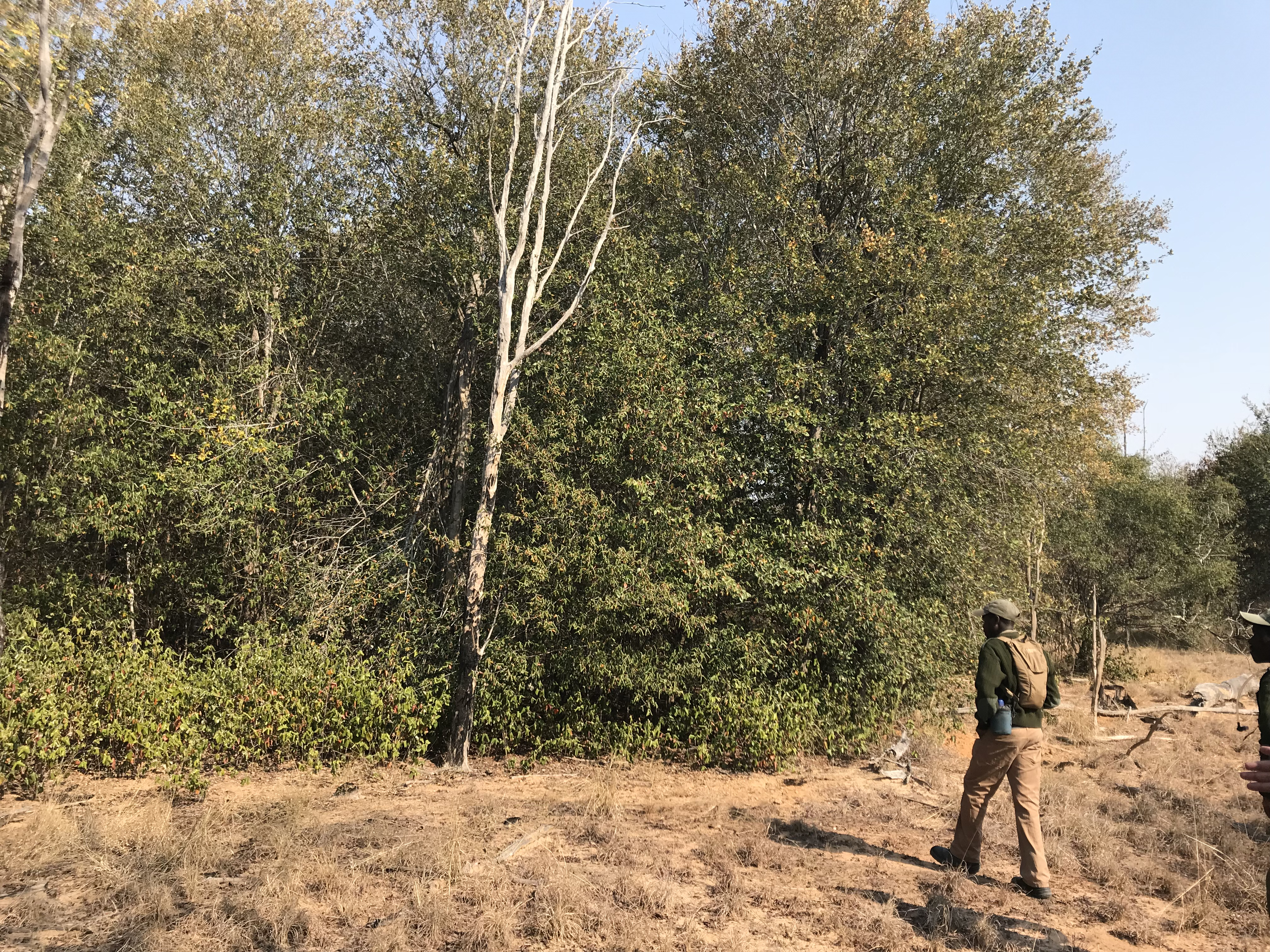 Where we found the bull

After waiting 20 minutes we were in pursuit of this warrior once again. We tracked and tracked an tracked, but couldn't catch up. This bull knew he was being hunted. They don't get this old for no reason. He was a smart boy. After another 5 hours of tracking in some serious heat, we made the call to head to the car. The rest of the day was uneventful in terms of buffalo, but we did see very nice eland, kudu and a big python that afternoon.

Day 2. We were up at 4, quick coffee and made the drive to a different part of the concession. We track 4 bulls for over 6 hours, before bumping them in very thick stuff and making the call to go and have lunch. 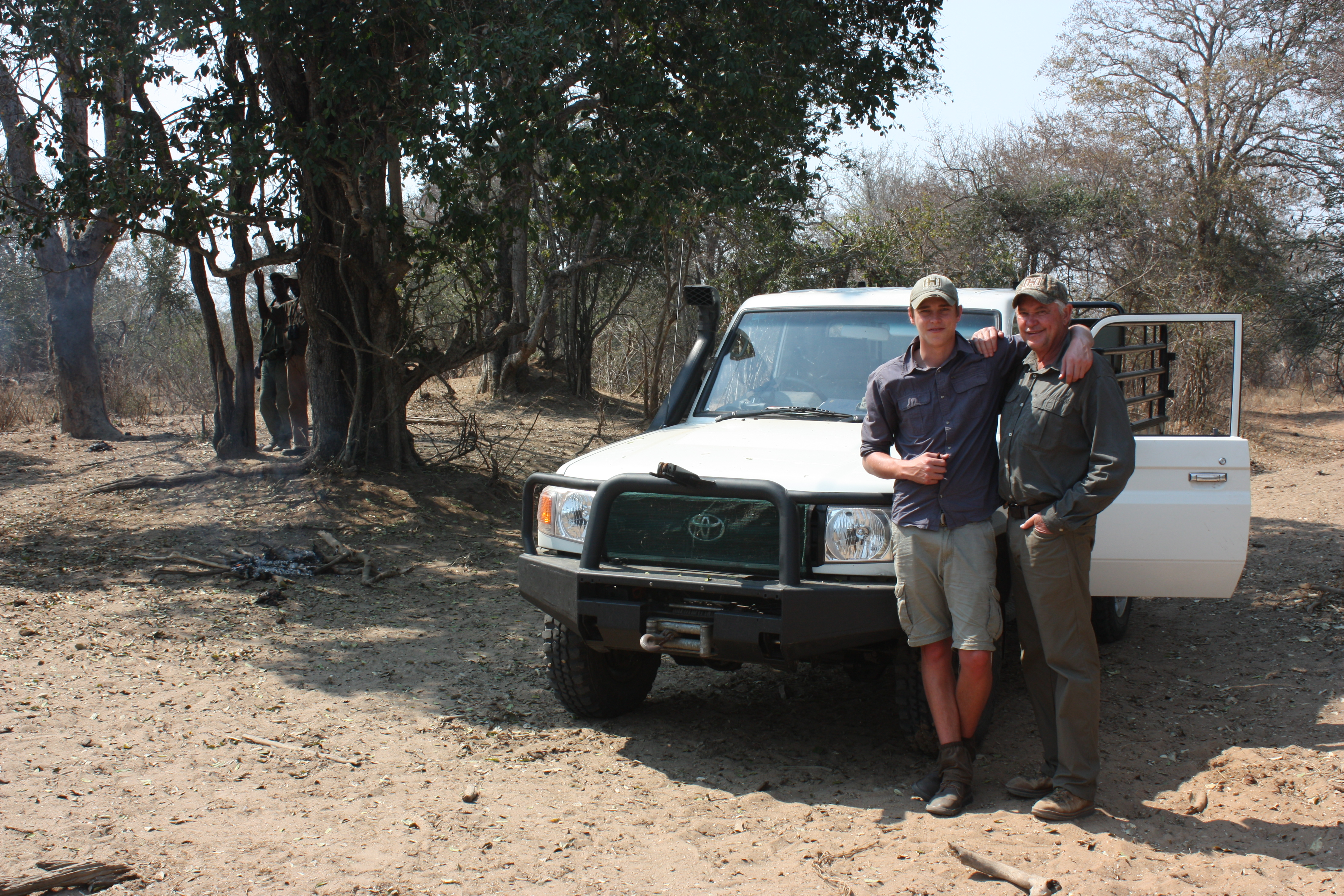 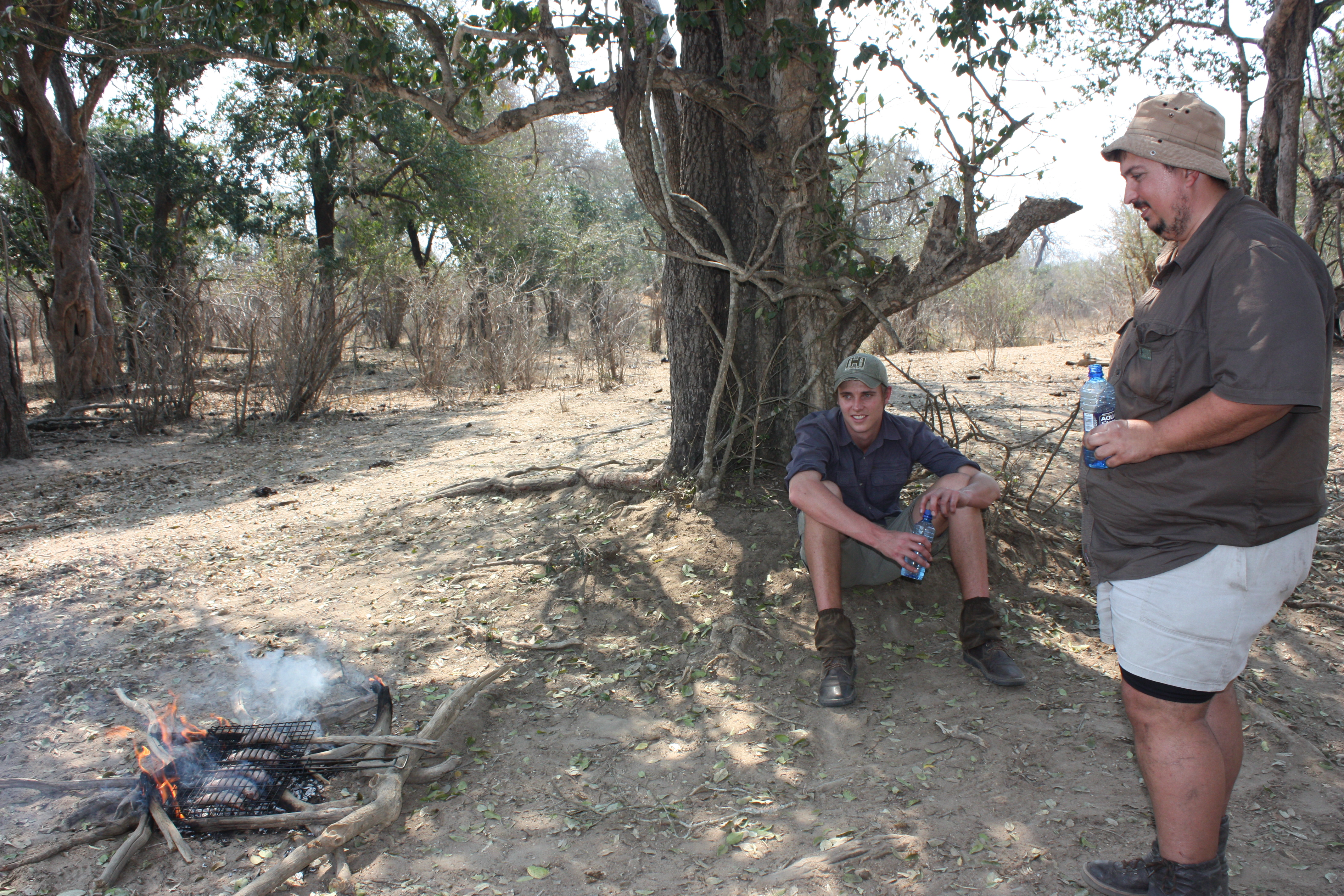 This is where things got interesting. That afternoon, whilst driving from waterhole to waterhole to look for tracks, we found a small group of buffalo next to the road. We drove on for a kilometer and walked back to start tracking them. We couldn't catch up, but our ph thought they were heading for a waterhole three kilometers away. We sent the trackers back to the car with the instructions to pick us up at the waterhole at quarter to six. We got to the waterhole, but no buffalo. Half past 5 the trackers drove in. They found a lone bull sleeping under a tree on their way to the car! By the time we got to the area where they found him it was to late and dark to go after him, so we made the call to go back early the next morning. 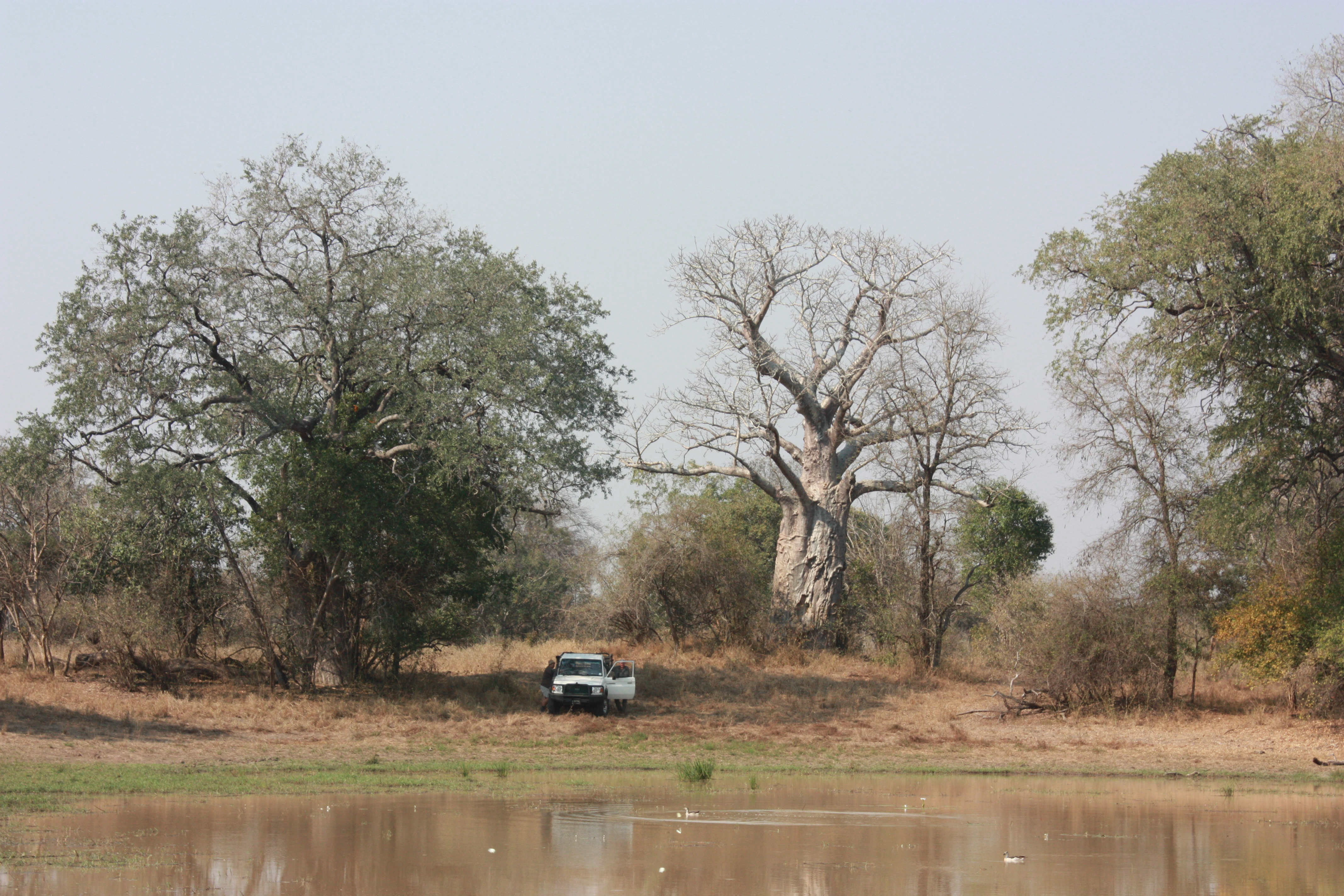 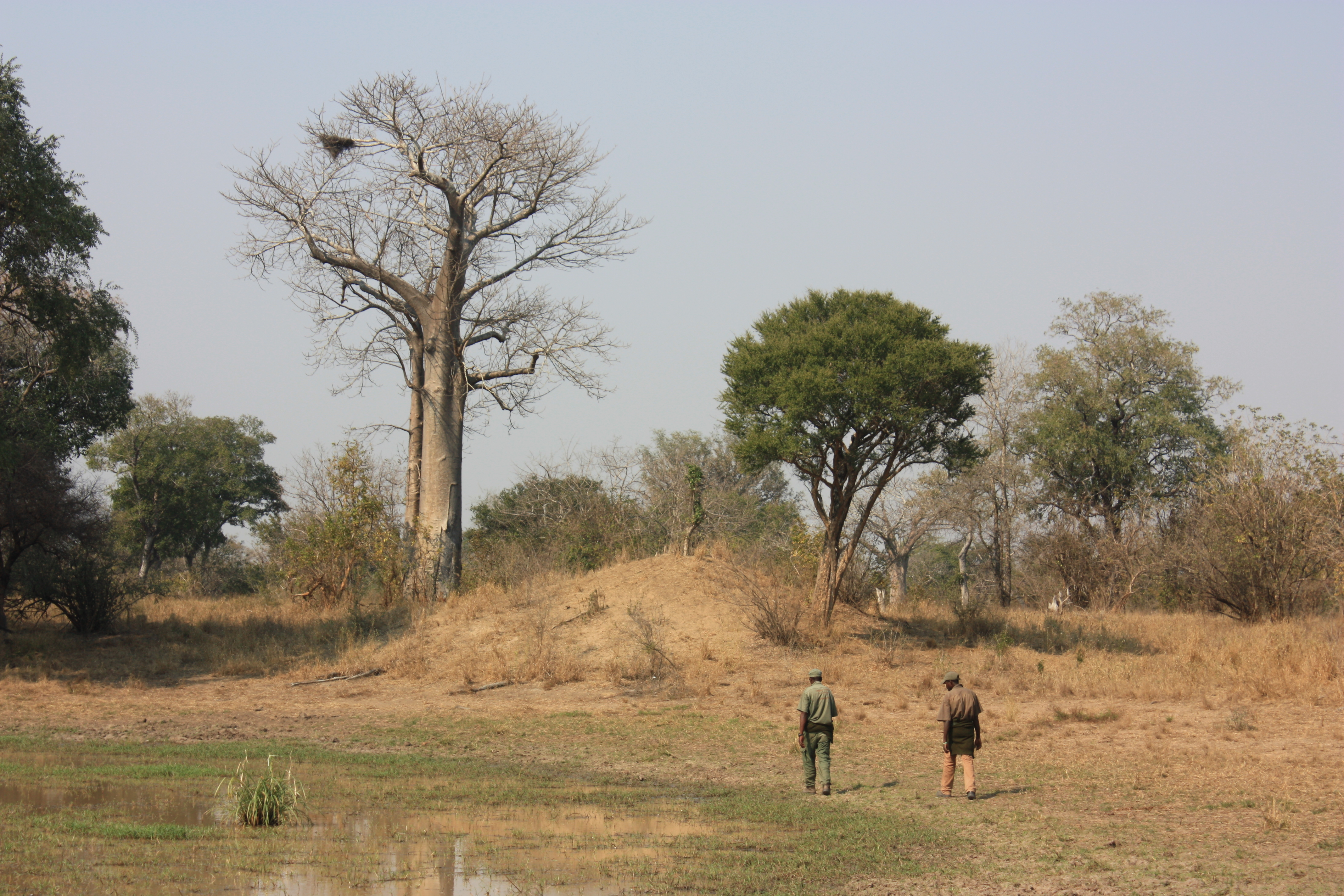 The next morning we started at a waterhole close to the spot where they found him. We found his tracks and it was game on. The wind was perfect. We had a feeling that our luck was starting to change. Less than a kilometer from the waterhole the sticks went up. My dad got on the sticks. The buffalo was lying down behind a bush. He got up, walked out of the bush. My dad shot, hitting him hard with a 400 grain soft, I made a quick backup shot with a 500 grain solid. He was down on the spot. Ten hard days of hunting has payed off. We couldn't have asked for a better bull, hunt or experience. Next year we will be back for my bull. Stay tuned 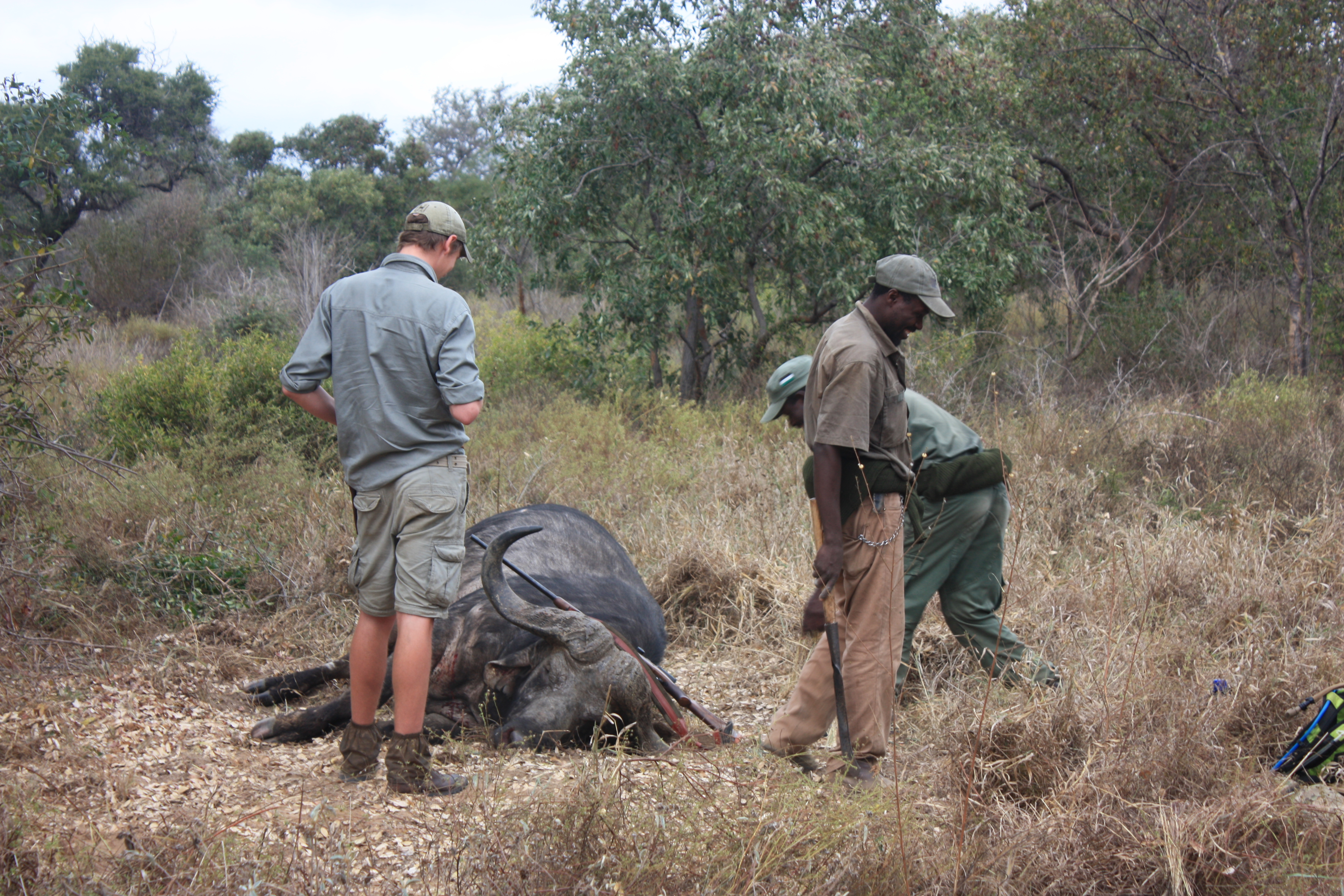 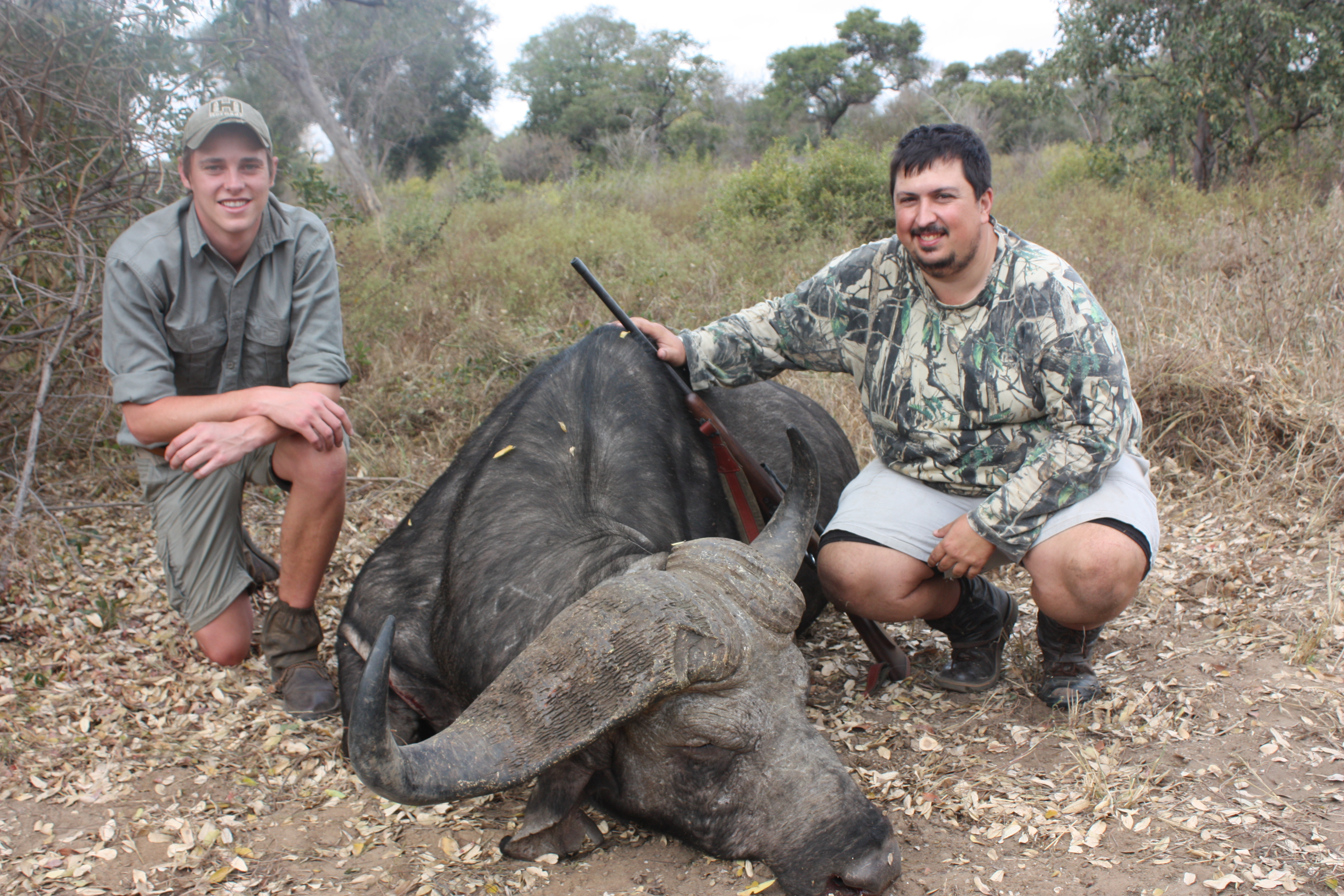 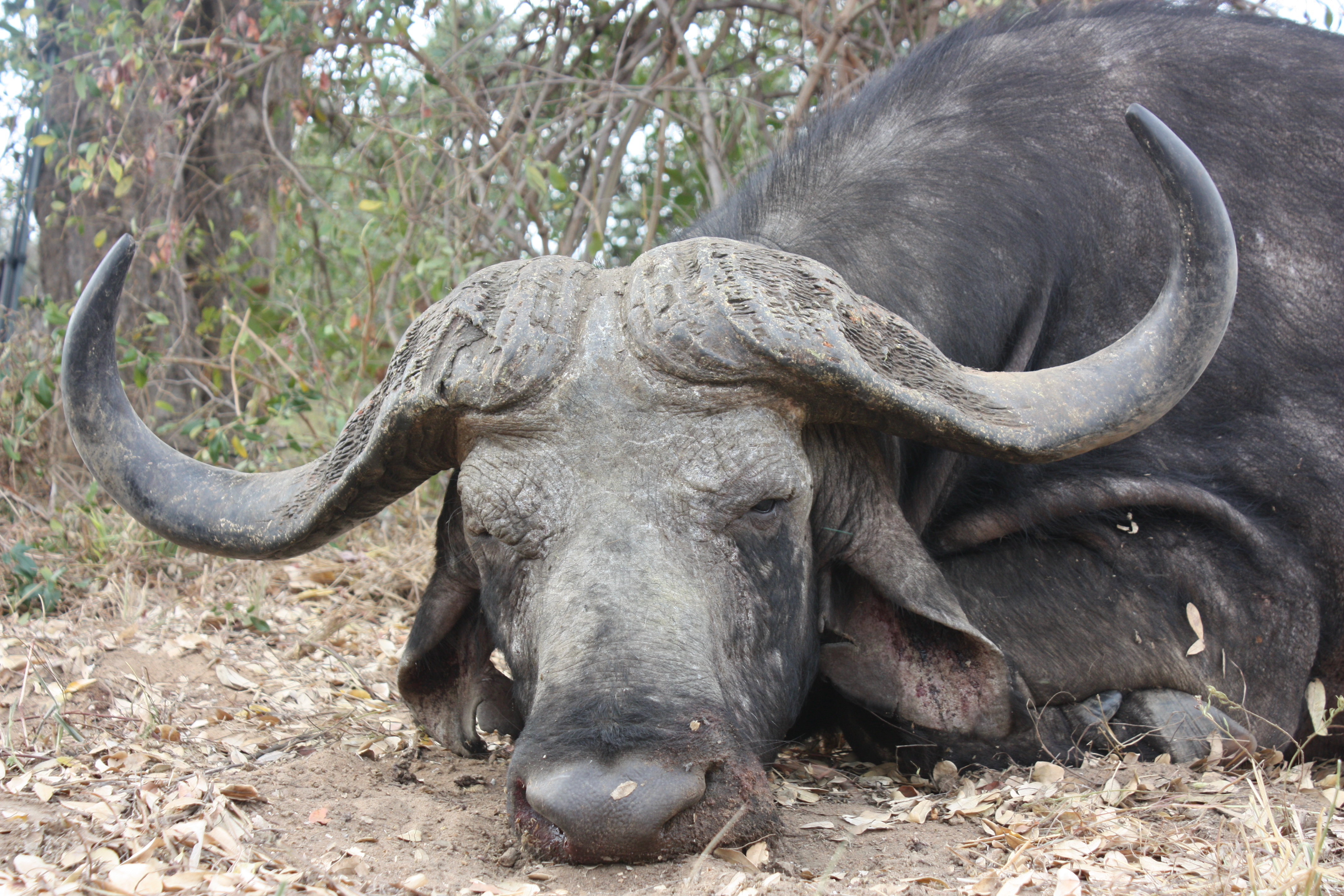 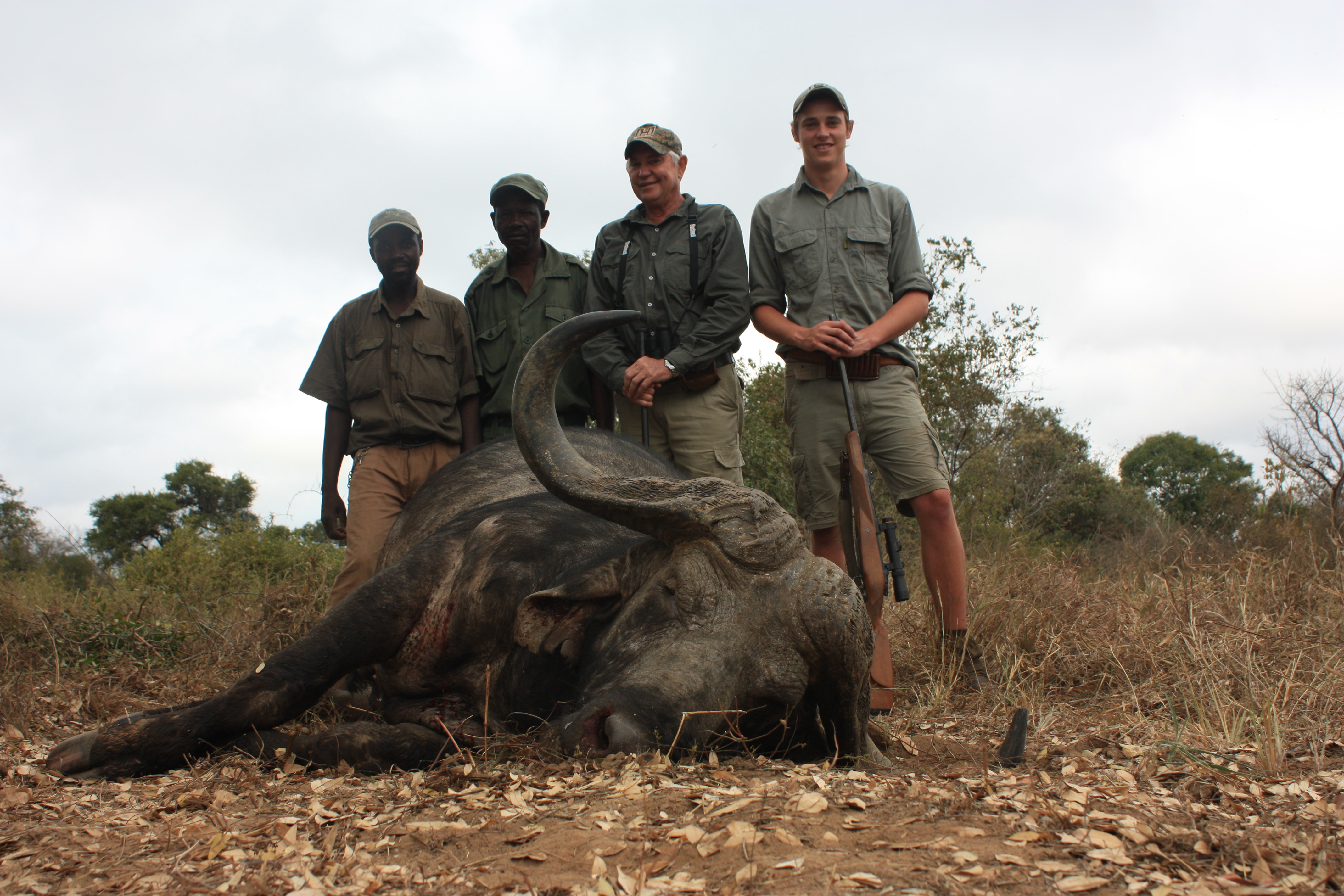 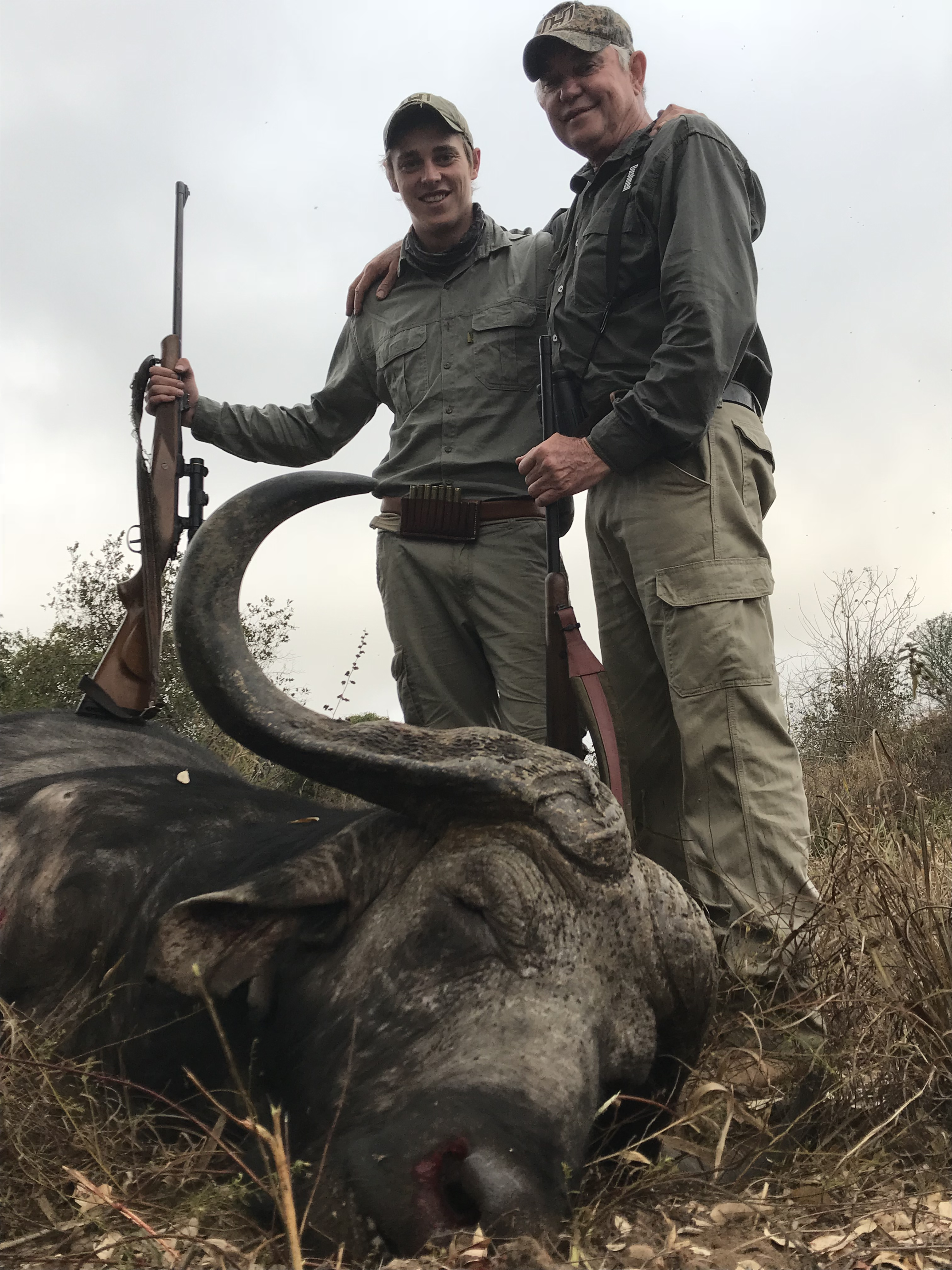 Joe
Welcome to AH. Nice job on post
Tenacity won out Congrats to your dad and you. You both have great memories and trust me, his knees were killing him

Congrats on the nice buff and thanks for sharing!
John 3:16

Well done!!! You are right, your dad is tough!

Congratulations to you and your dad!! Great old buff!
JasonY

Congratulations to you both. Great hunt and a nice trophy.

Excellent report! Welcome to AH! We’ll be looking forward to your buffalo! Thanks for sharing what looks and sounds like a grand time with your dad!
Africa on my mind.

The trophies we hunt hardest for are the ones we remember the most. You have great stories to tell and a beautiful trophy. Your dad may of put in the 1st shot, but its your trophy too as you worked as hard as he did.
Glad he was able to do it with his knees. I had both replaced 14 months ago so I know all about it. Congrats
Bruce

Congrats to both of you on a great hunt, and thanks for sharing the story.

Sounds like a great adventure with your dad. Nice buffalo!

Well done! Congrats. And welcome to AH.
Tommorow is promised to no one. Go live your dreams.

What an amazing hunt.... Congratulations! Thanks for sharing your story.

Congratulations to you and your Dad. That grand old bull has the face of a deposed king and a priceless story to go with it.

Just curious, who was the outfitter and PH?

Congratz on a proper buffalo hunt! Thank you for sharing

Congrats to you and your dad, for a great hunt and buffalo.

Well done!
Captain of the Luddite Society
https://www.africahunting.com/threads/zimbabwe-hunting-the-bvc-in-zimbabwe-for-buffalo-john-sharp-safaris-exceeding-expectations.53046/
You must log in or register to reply here.

ZIMBABWE: The Story Behind Chap's 45" Buffalo

SOUTH AFRICA: The Echo Of The Buffalo