I have been on may African hunts but now I am truly spoiled after hunting with Craig Boddington in Mozambique at Zambeze Delta Safaris, Mark Hadane's outfit. This was not my first dangerous game hunt but it certainly was the best. Craig had invited me along so I signed up. Craig shot a buffalo the first day in the sand forest with his double 9.3X74R. The next day we headed for the swamps where Craig and I hitched a ride in a helicopter while the rest of the staff and camera crew roads in trucks. From the air we seen many large herds of several hundred head each, easily over 1,000 head in 15 minutes. We landed near the BV amphibious vehicle and search for a herd. I was up first and after long hot stalk took my first buffalo with a 375. Craig was up next and made a few stalks before getting a shot and took his 99th buffalo with a Blaser in 416 Rem. With the same herd still nearby we draped black net over us and simply closed a few hundred yards to with in 70 yards and I shot me 2nd buffalo with my Sabatti double rifle in 450/400 3" NE. By then it was getting late and Craig and I wrote the helicopter back while the staff loaded the buffalo in the BV. Later at camp we had a discussion about Craig taking his 100th buffalo and a few days later after we both shot several Nyala, Reedbucks, Bushbuck and Bush pigs, Craig asked if he could barrow my double 450/400 to shoot his 100th buffalo. So he test fired the gun and headed back to the swamp where it was 110 deg. and shot his 100th buffalo. Craig and I both shot Nyala over 30" and I shot a total of 10 animal and not sure how many Craig shot. Game was incredibly plentiful and high quality. I not only saw thousands of buffalo in the vast swaps but also on 3 occasion in the sand forest while hunting Nyala. The camp was absolutely 1st class and Craig is a pleasure to hunt with. I would not hesitate to recommend Zambeze Delta Safaris to anyone. That are a bit expensive compared to hunting in Zimbabwe but it is a very well equipped camp and first rate staff with an incredible amount of game. I have seen over thousands animals during the 10 days of the hunt. 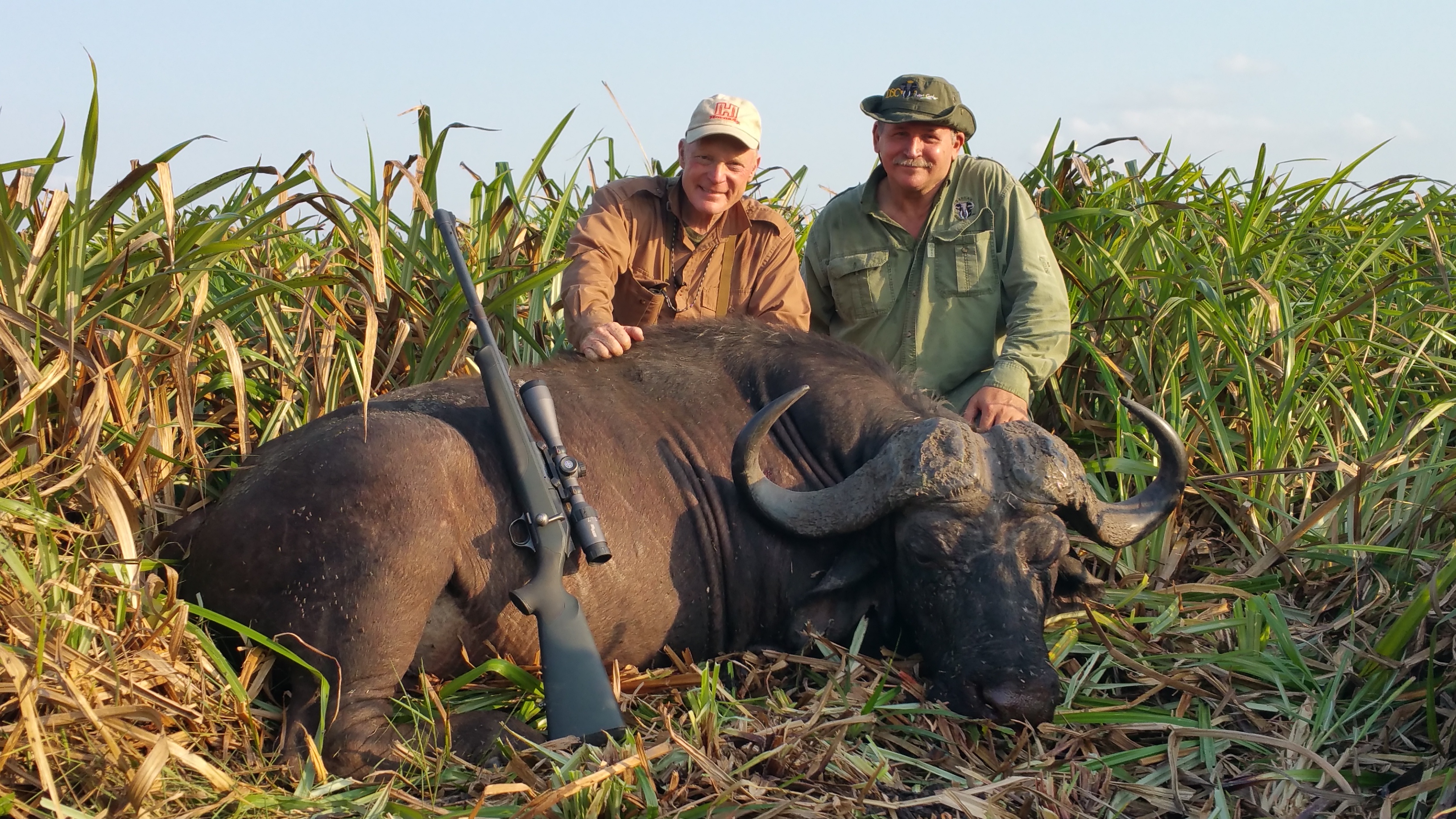 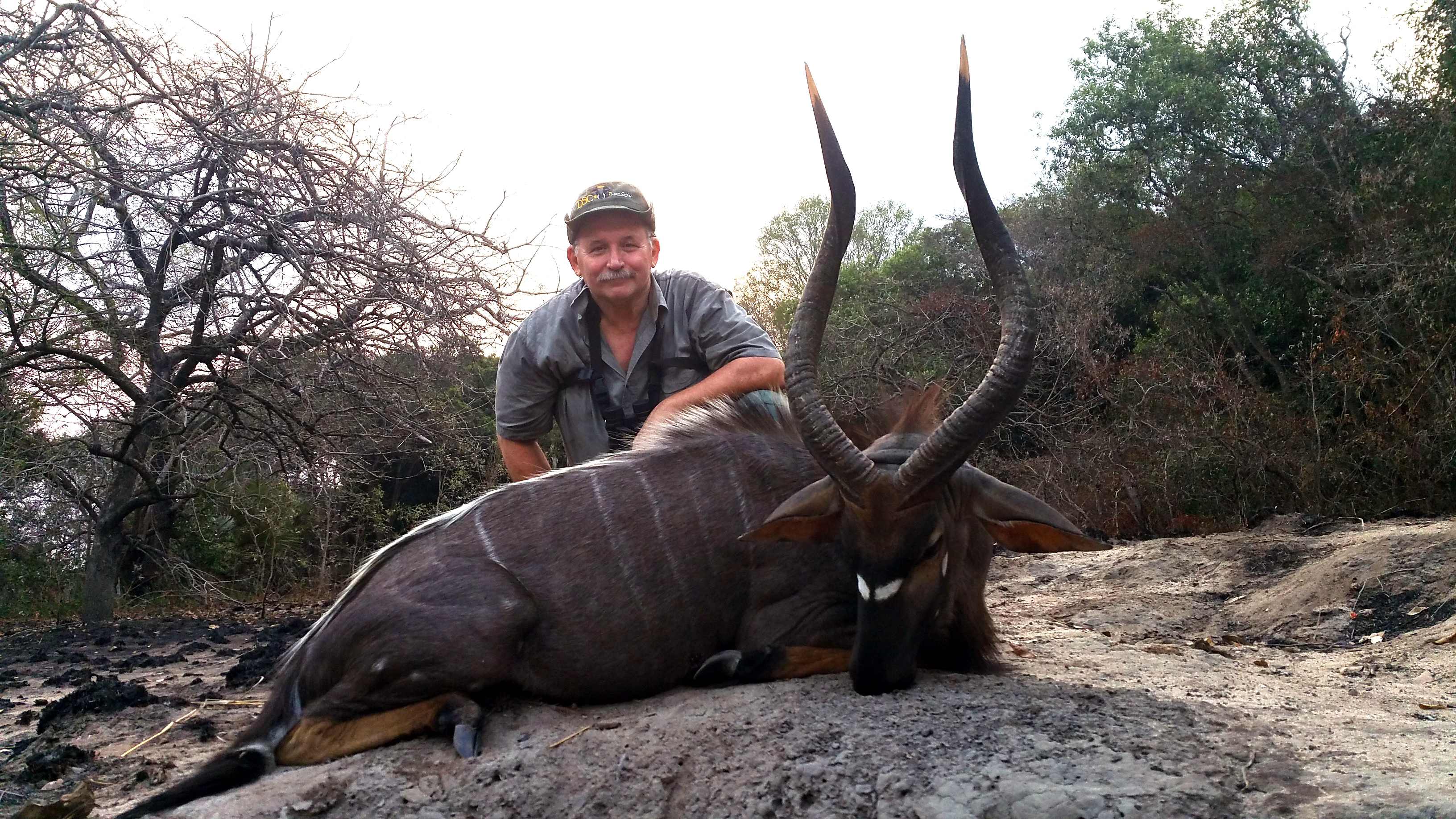 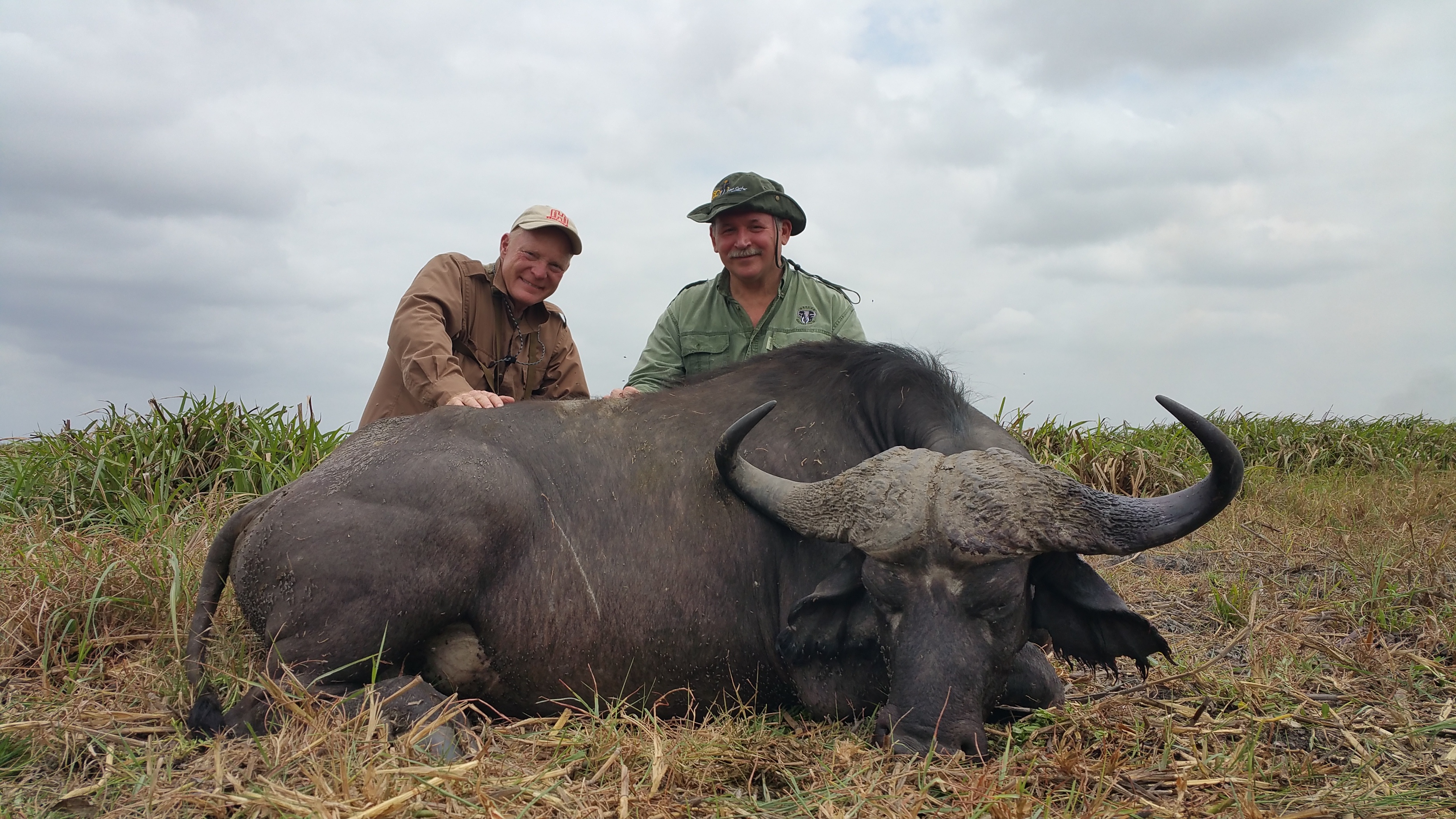 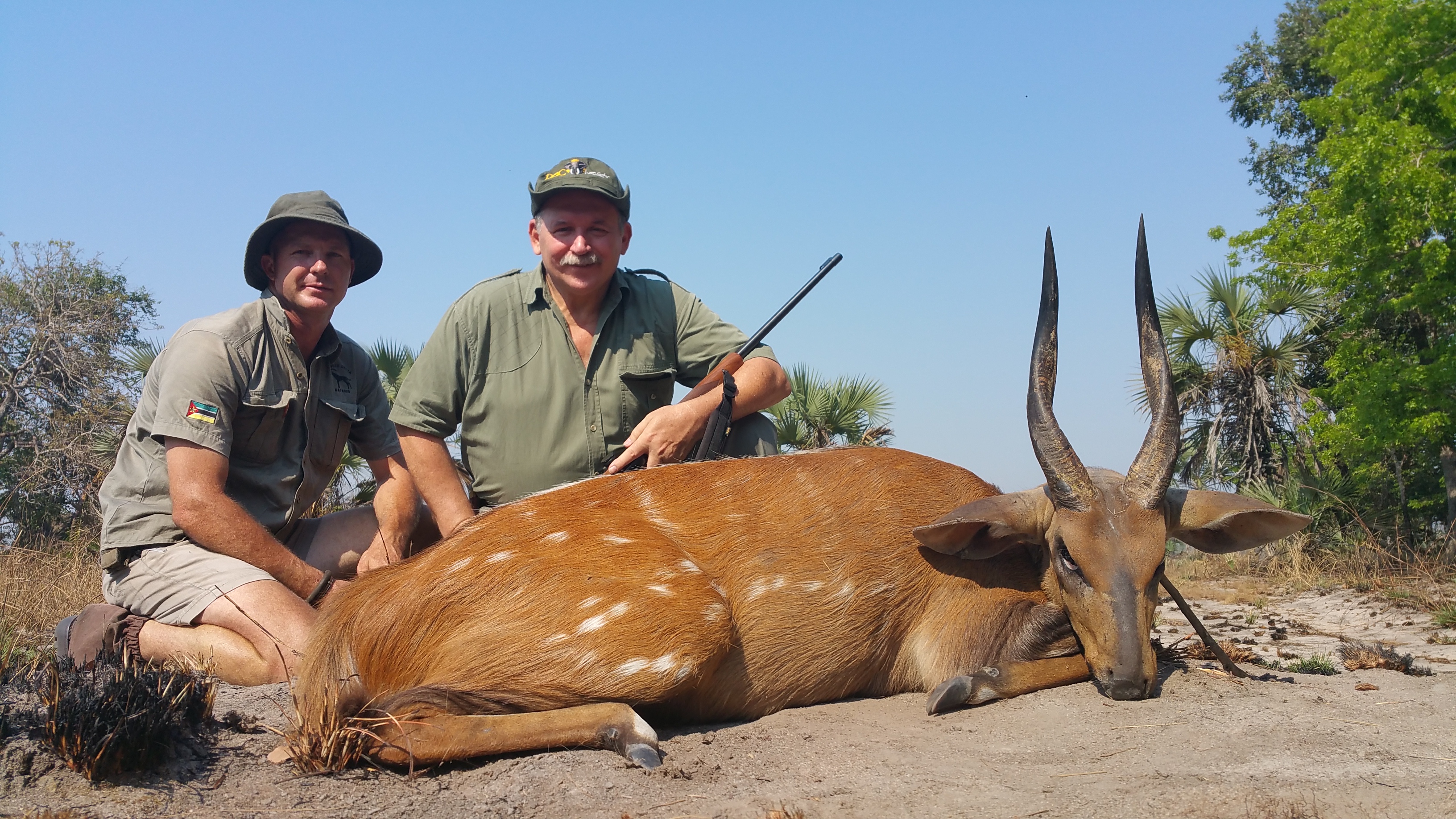 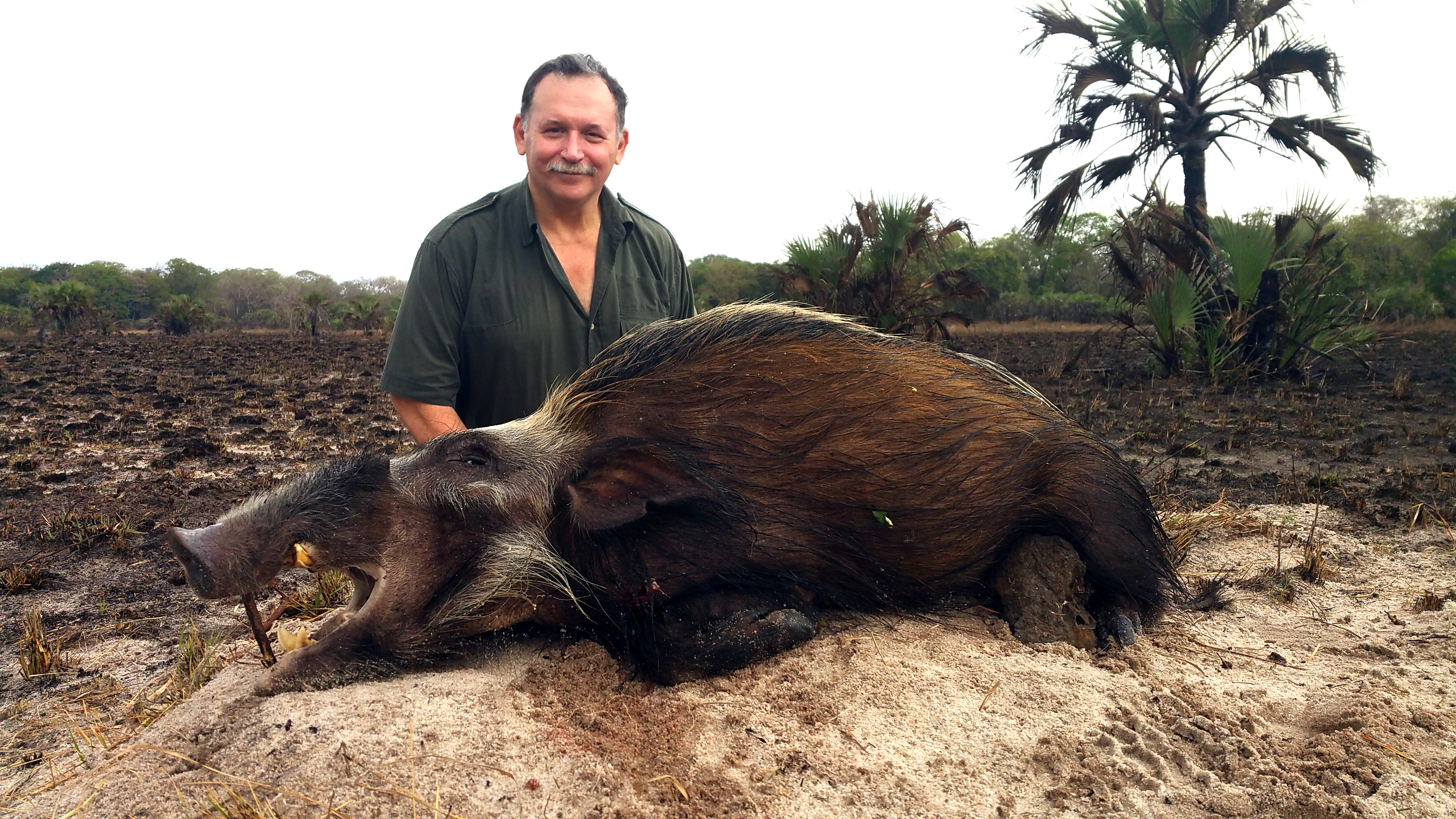 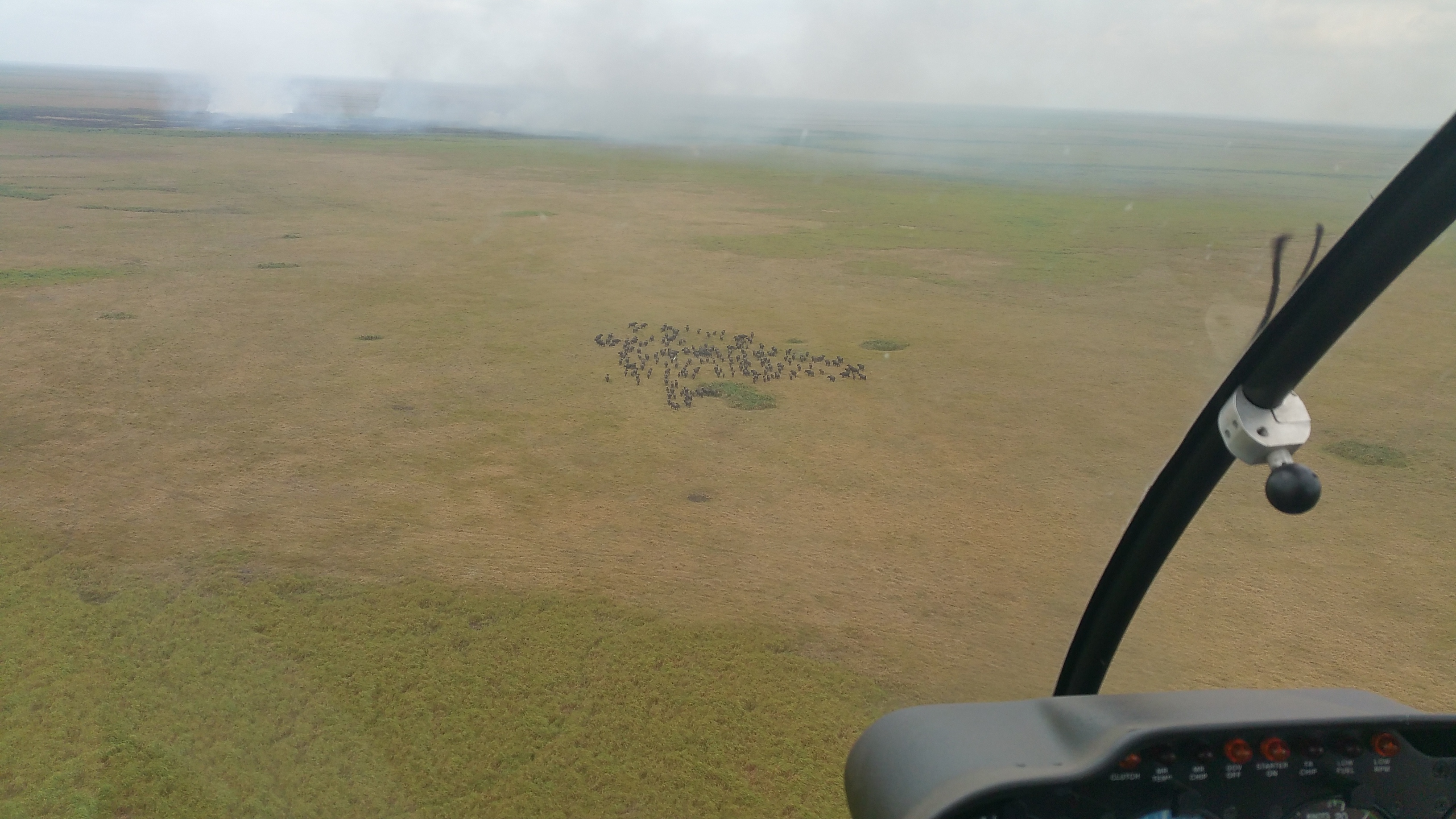 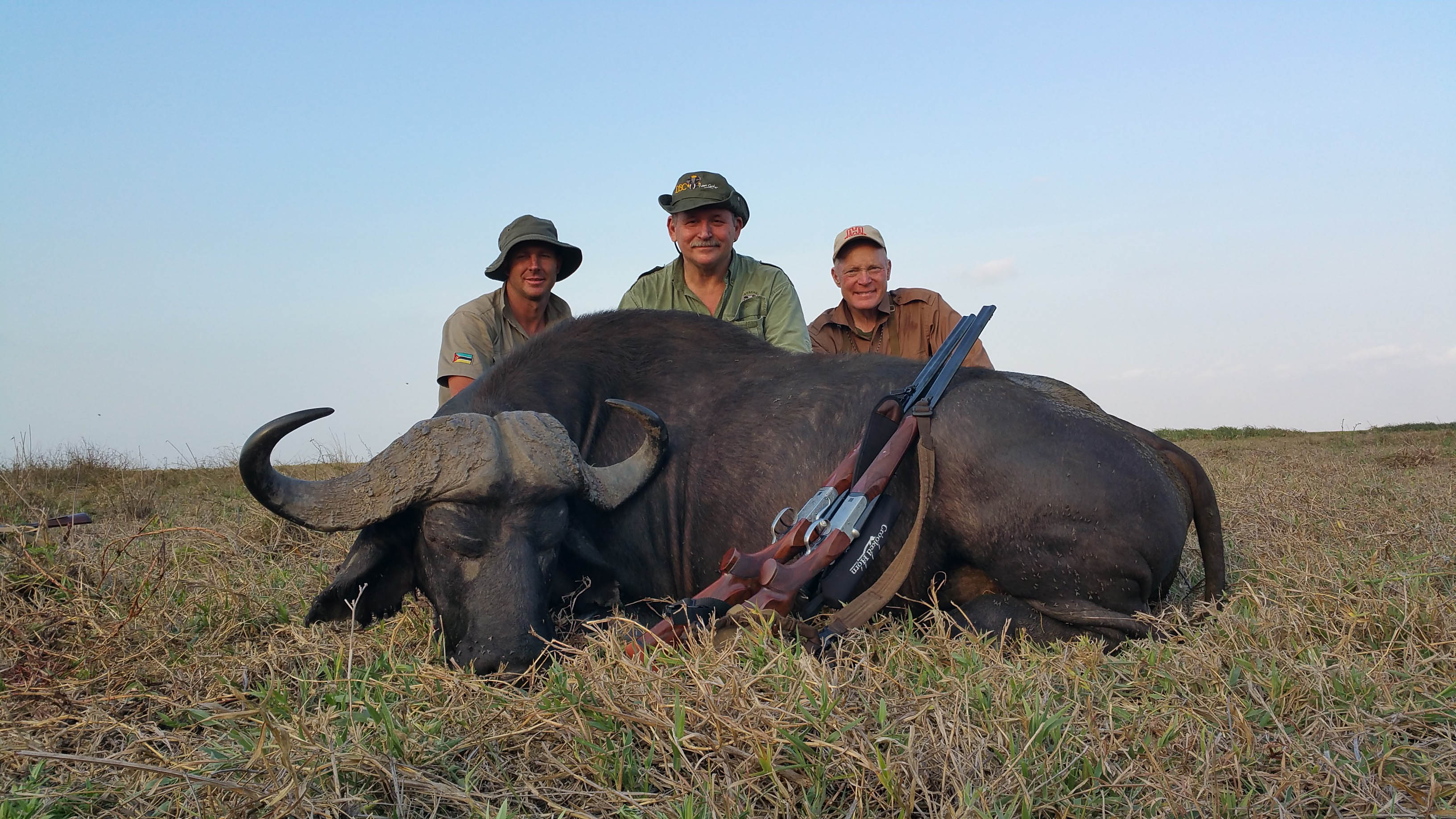 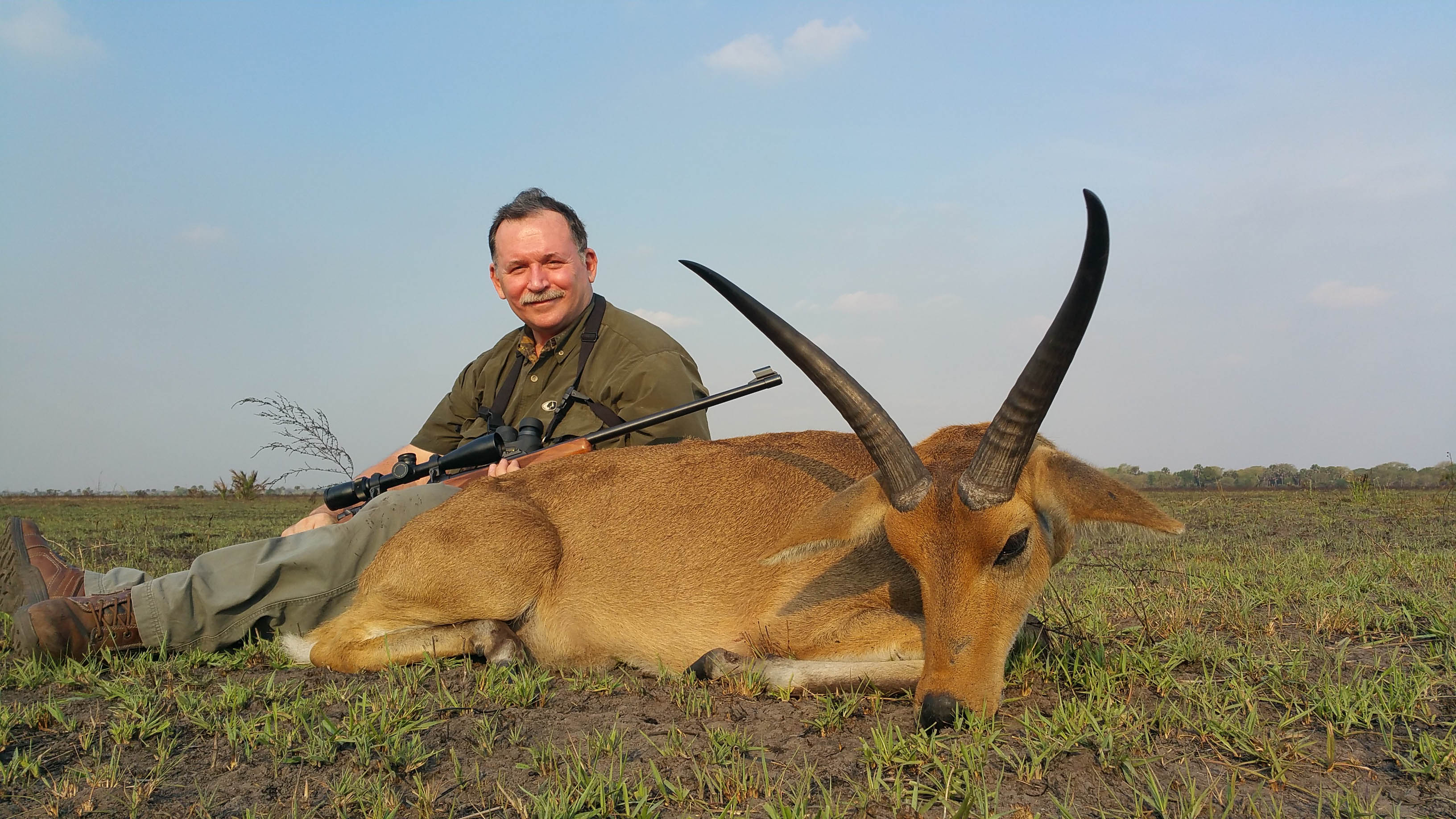 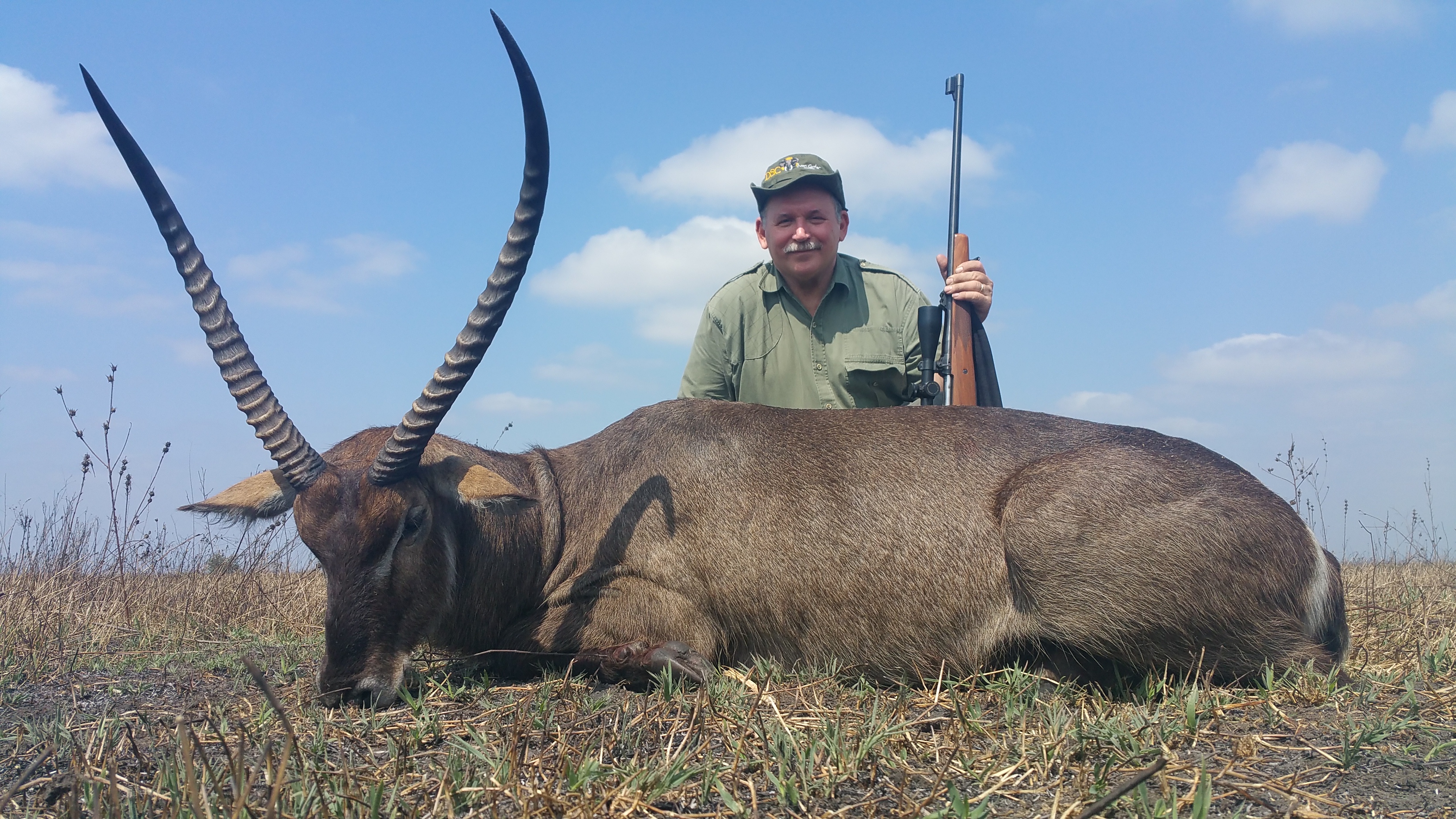 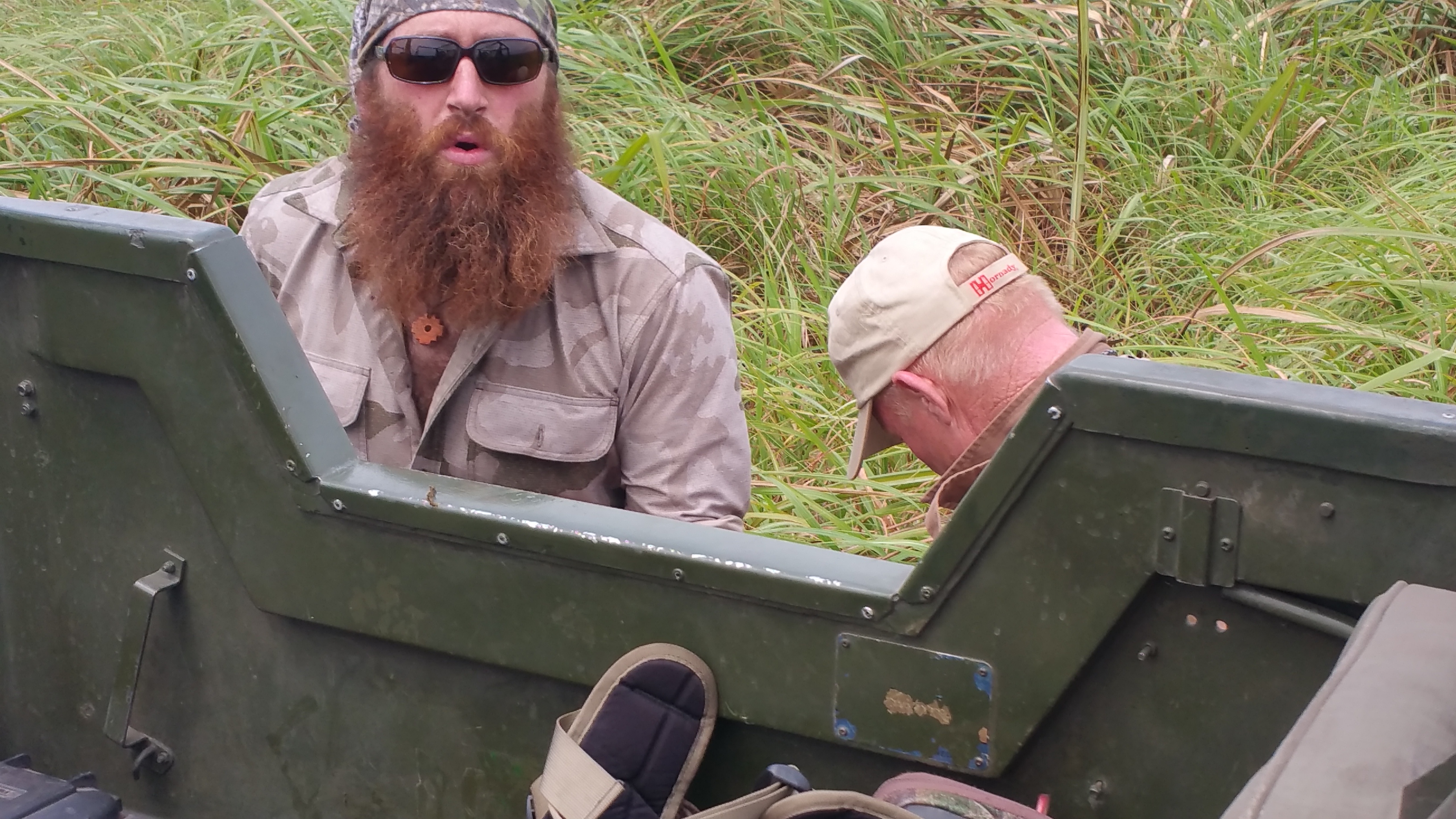 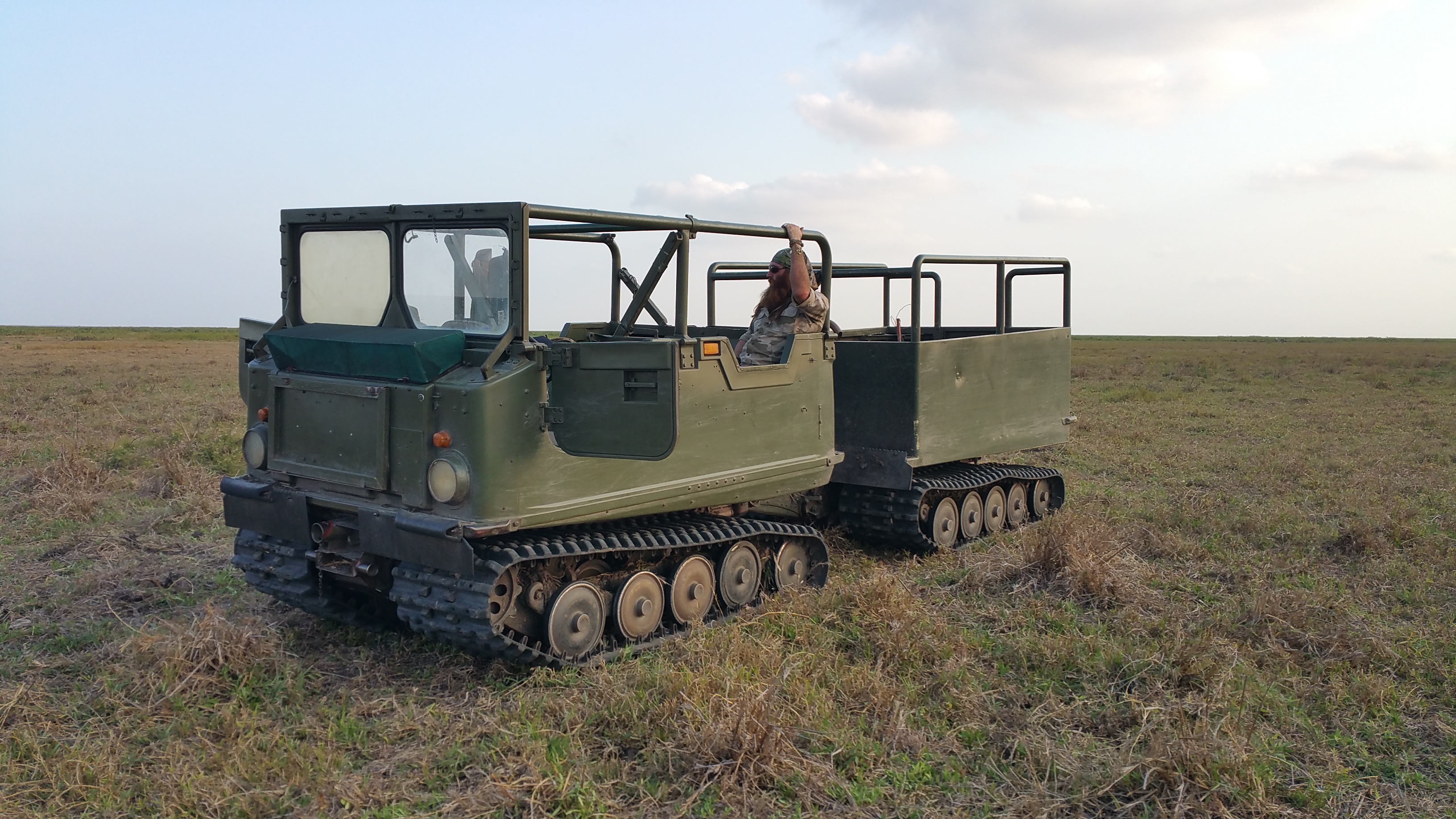 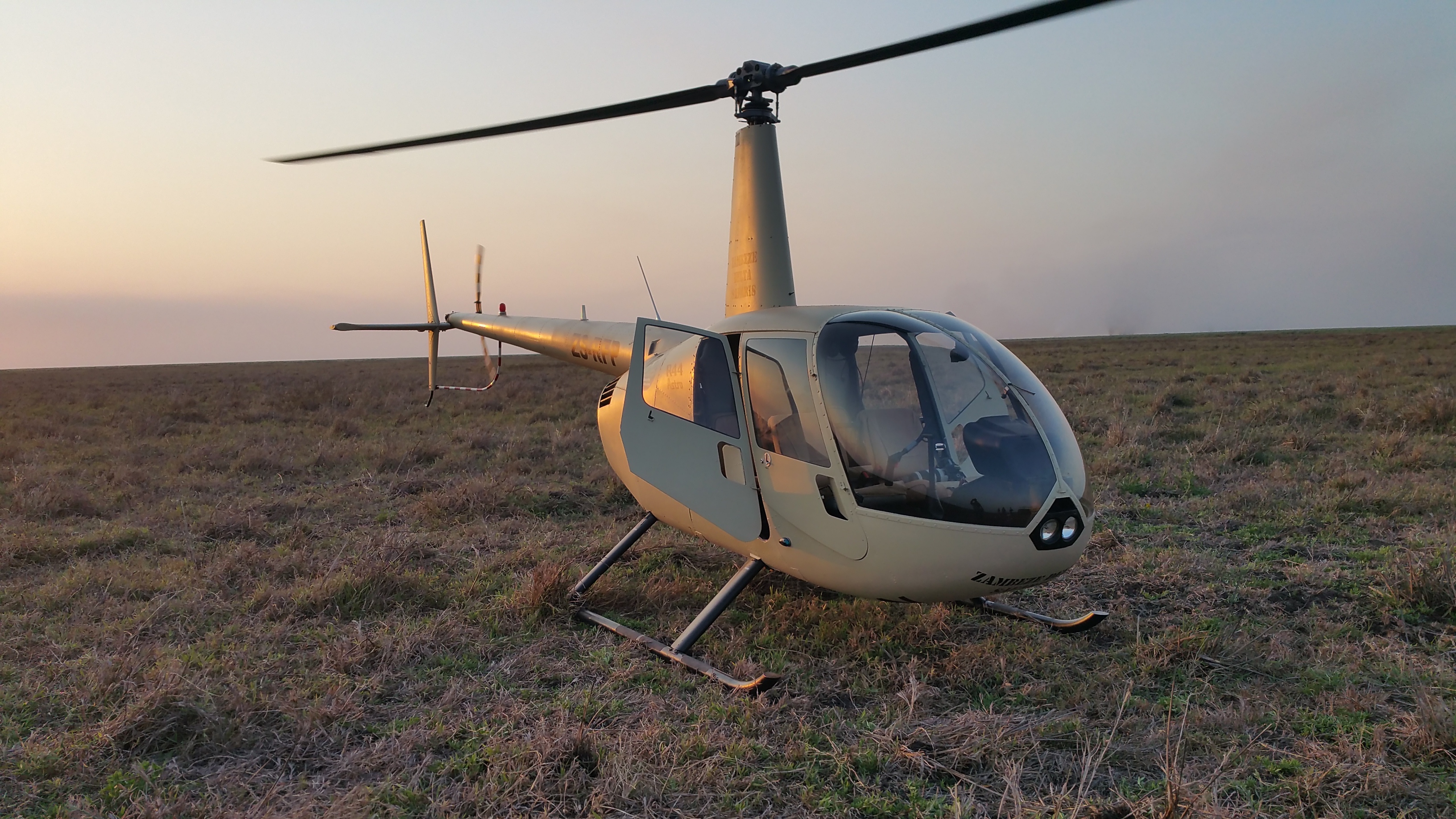 Some great trophies there, congrats!

Congrats on a successful hunt! Now that double has some serious provenance.
Silence, Speed, Violence of Action.

Boddington autographed the rifle for me and send me a letter on his letter head about using that rifle for his 100th buffalo which was extremely kind of him. What a great guy.

I forgot to add that Ivan Carter was in camp too. Ivan is the man who taught me how to shoot Elephants several years ago. The trip was also filmed for Petersen's Hunting Adventures. I was filmed too but no telling if they will air that part.

Talk about a once in a lifetime experience! Envious may be too strong, maybe...
Silence, Speed, Violence of Action.

What a hunt! Wow! And with one of our currently most famous hunters! I hope you have kids or grand kids to tell this story to someday!

WOW! This had to be a great hunt given the company and the trophy evidence!
M

Wow!
We will read all about it in Craig Boddingtons, next book, of next decade of his hunting african adventures!
Congrats

It must have been an awesome experience. 100 buffalo for Boddington ,.can't even imagine. Thank you for.sharing, great pics!

Congratulations on such a grand experience! Definitely a gun and letter for history and some wonderful trophies!
Africa on my mind.

Congrats and thanks for sharing! You got some nice trophies there! Super nyala!!
John 3:16

Though I have hunted a lot in the States considering my age I always feel a bit of extra pressure to hunt and shoot well when on any type of guided hunt. I certainly did on my one plains game safari. I also have been filmed a bit and know how self-conscious one can be when cameras are rolling. Add dangerous game and two hunters of such reputation...What an experience! Good for you. I hope your footage makes the show.

I’m so jealous! Congratulations on a great hunt and experience! Wow.
Tommorow is promised to no one. Go live your dreams.

Sounds like you had a grand time. Be fun to be in camp with CB. Nice trophies. Tanks for sharing. Bruce

Sorry about the typos in the spelling. It was late when I wrote this. I fist met Craig Boddington over 10 years ago. We started doing some work together about 1 1/2 years ago and I got to know him well enough to know he is the real deal. One of the most considerate and modest persons I know. He would greed every one who came him camp. There was a lot more about the trip that I did not write about but it was really about 10 times more exciting then my writing shows. I have another hunt that I invited Craig on, so we'll be hunting again soon. I really don't know how Craig keeps it up. It seems like he hardly has a week or more between hunts. Amazing to see him in action switching between guns like I change socks. Mark Haldane was amazing also as well as my PH Dylan. I forgot to mention Craig's video photographer Matt Young whom I became friends with. Great guy who spends a 100 days a year videoing hunts. He will be videoing Craig when he receives the Weatherby award at Dallas in January. I would share the picture of Craig's 100th buffalo but I'll leave that for him to publish since it's his glory. Check Craig's Face Book postings for late October to see more of the pictures of the hunt. Unfortunately, Craig's mother past away before he got home from the hunt.

Whiskey1 said:
Though I have hunted a lot in the States considering my age I always feel a bit of extra pressure to hunt and shoot well when on any type of guided hunt. I certainly did on my one plains game safari. I also have been filmed a bit and know how self-conscious one can be when cameras are rolling. Add dangerous game and two hunters of such reputation...What an experience! Good for you. I hope your footage makes the show.
Click to expand...

Yes the camera was making me a bit nervous and Craig behind me watching too was a lot of pressure to make a good shot. I nearly had heat stroke in the swamp and was struggling to my limit. I wanted to use my double on the first buffalo but could not get closer than 80 yards so I opted for an easier rifle and used my CZ .375 H&H and took a frontal shot dead perfect. I was so relieved that I didn't blow that shot with 9 people in the party and the camera rolling. But I really wanted to use my double on buffalo and when the chance came up after Craig shot his 99th Buffalo, I had to go for it. It was crazy easy to stalk the herd under the black net, to the buffalo we simply looked like another buffalo coming back to the herd. I took a perfect broadside shot with the 450/400, broke it's shoulder and hit it's heart. That was the gun Craig borrowed to use on his 100th buffalo.

What an outstanding hunt! Thanks for sharing your story & photos!

Guy
You must log in or register to reply here.

MOZAMBIQUE: Has Anyone Hunted With Zambeze Delta Safaris In Mozambique