Effective immediately, O.F. Mossberg & Sons will not accept any future orders from Dick’s Sporting Goods or Field & Stream, and is in the process of evaluating current contractual agreements.

“It has come to our attention that Dick’s Sporting Goods recently hired lobbyists on Capitol Hill to promote additional gun control.” said Iver Mossberg, Chief Executive Officer of O.F. Mossberg & Sons. “Make no mistake, Mossberg is a staunch supporter of the U.S. Constitution and our Second Amendment rights, and we fully disagree with Dick’s Sporting Goods’ recent anti-Second Amendment actions.”

Consumers are urged to visit one of the thousands of pro-Second Amendment firearm retailers to make their purchases of Mossberg and Maverick® firearms. Firearm retailers can be found through the Mossberg Dealer Locator by visiting http://www.mossberg.com/dealers/.

Founded in 1919, O.F. Mossberg & Sons, Inc. is the oldest family-owned firearms manufacturer in America, and is the largest pump-action shotgun manufacturer in the world. Leading the way with over 100 design and utility patents to its credit, and standing as the first ISO 9001 Certified long-gun manufacturer, Mossberg is considered to be one of the most innovative firearms manufacturers in U.S. History. For more information on commercial, special purpose, law enforcement and military shotguns, rifles and accessories, please visit their website at www.mossberg.com. 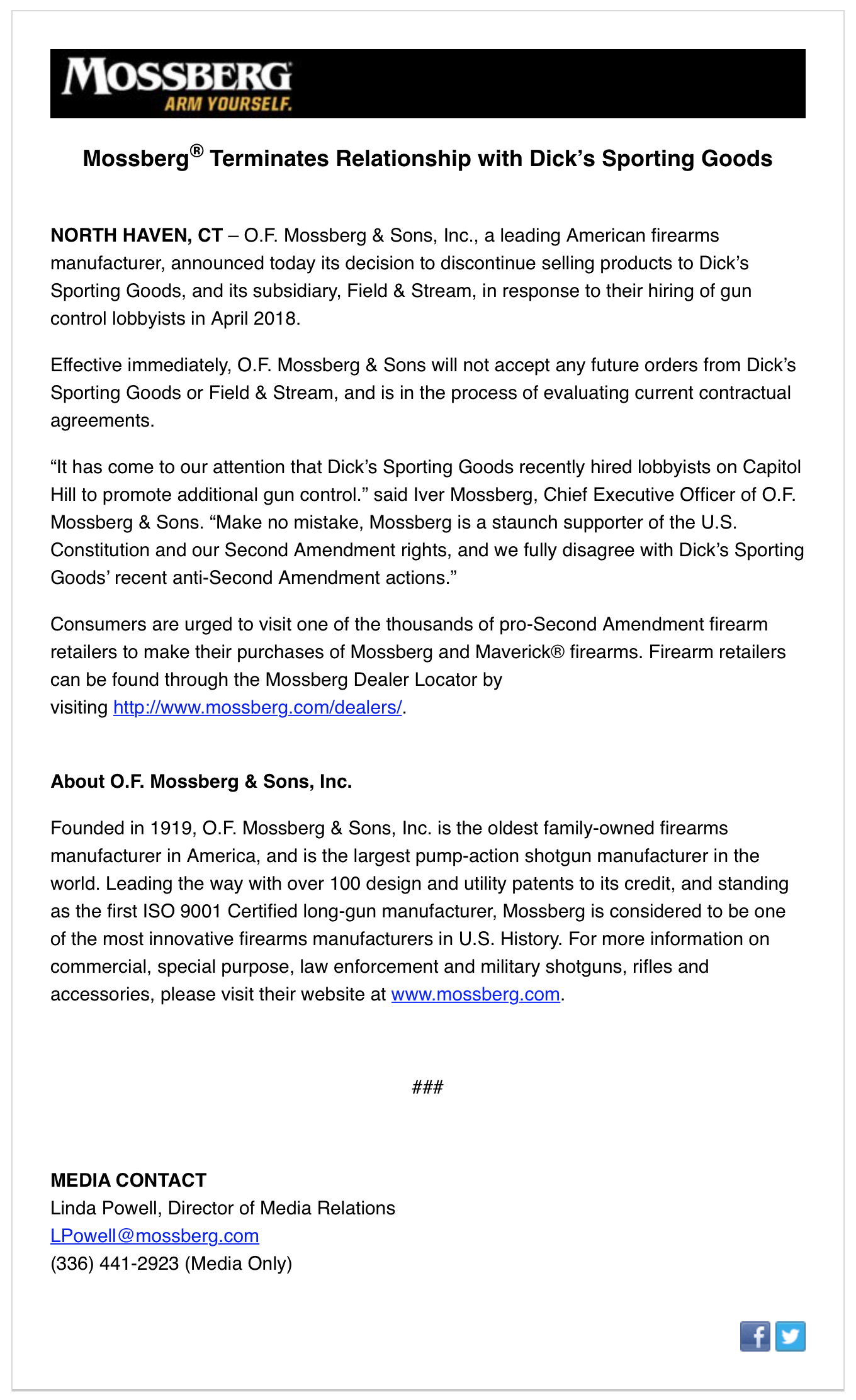 Don't know how much impact it will have as Dick's is not know for gun sales. But good for them!
Tommorow is promised to no one. Go live your dreams.

Outstanding News. First Springfield Armory and now Mossberg. If every Gun and Ammo manufacture follows suit that would send a message of "Shall not be infringed!"

Dicks may not sell a lot of guns, but the key is to find somewhere else to go for the stuff that they do sell. They're in a pretty competitive market, so unless there's a good reason to go there, probably should look elsewhere for your sporting equipment.

Mossberg and Springfield Armory have put their convictions ahead of their wallets. As hunters, we can do no less.

Except for CO2 bottle refills, I stopped buying from them when after Newtown, they went snowflake on black guns. I doubt the suits that run the outfit could care less if any gun manufacturers leave them. They make their money on high margin, cheaply made Asian garments and pro sports ancillary items.
"Every man dies. Not every man really lives". William Wallace
D

I support the gun manufactures. I have bought a number of firearms from Dicks because of price and they are close to me. I will not go into their store again. I can do without Field & Stream also and never did deal with them.

Good on them! Now, if the ammo manufacturers will do the same to Dick's.
M 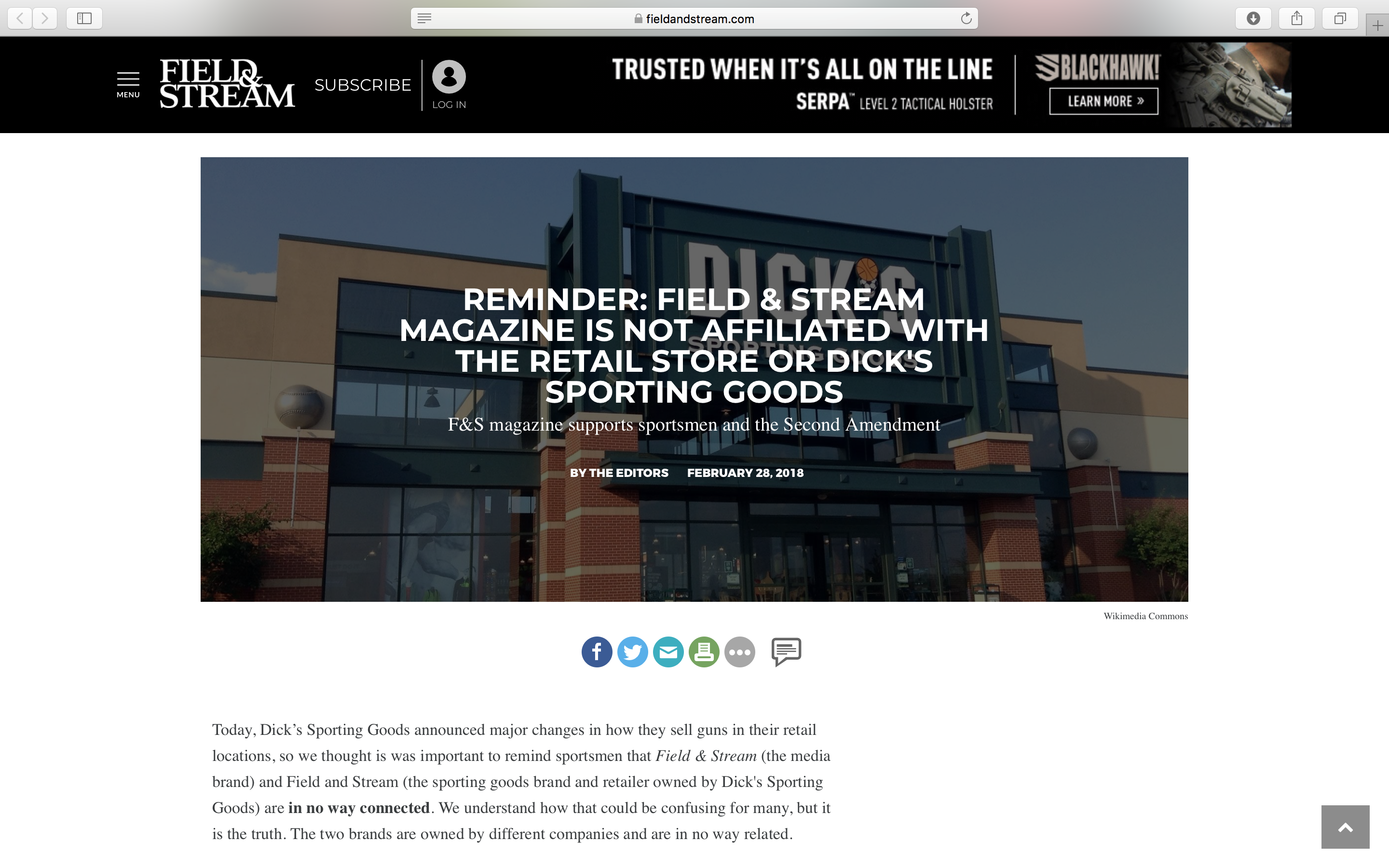 Hank2211 said:
Dicks may not sell a lot of guns, but the key is to find somewhere else to go for the stuff that they do sell. They're in a pretty competitive market, so unless there's a good reason to go there, probably should look elsewhere for your sporting equipment.

Mossberg and Springfield Armory have put their convictions ahead of their wallets. As hunters, we can do no less.
Click to expand...

Dicks opened a branch chain called Field &Stream which only sells shooting/Hunting and Fishing equipments the one by me is big and resembles a Bass pro shop style of store. Which is why it is strange their anti gun mentality? We have a large population of hunting/shooting enthusiasts in this area and ALL have vowed to not buy from them It’s almost like an Autozone store stating it will not sell parts for Ford/Chevy cars

I agree totally with others on this site. I live near New Orleans Louisiana and get out west to Lafayette on business were a huge Dicks and Field and Stream are co-located. Field and Stream is assume. They have a large Firearms selection as well as reloading supplies. I WILL NOT PATRONIZE THEM ANYMORE. There are other places to shop in Lafayette which are pro Second Amendment. As stated elsewhere, I will also never buy another Yeti.

Well done Mossberg!
If Dick's is looking for sporting goods to fill the void left by the empty shelves, I suggest they merge with the "Head Ski Company".
I will not buy there again...........FWB
You must log in or register to reply here.

Dick's Sporting Goods - Gets what it deserved

Bush Encounters Of A Close Kind