Decades ago, when the terminal velocities of modern cartridges became faster and more hunters went to Africa for big game hunting, reports on failure of the copper cladded, lead core FMJ bullets became evident (bending, breaking up, fishtailing). That was the time, when the monolithics offered the answer for good performance. There were only minor complaints on the drawbacks: e.g. less penetration in the game, loss of volume for the powder in the smaller cases and some times a ruined rifle due to a mismatch in bore/bullet diameter esp. for older rifles. But today the new generation of steel jacketed bullets with lead or even tungsten cores offers again better performance than the monolithics. (The percentage of weight steel to lead is 50:50)! They are very rigid, no deformation under normal conditions and shooting distances. A monolithic is more susceptible to bending than this FMJs. They are the shortest solids, giving sometimes room for the additional bit of powder needed. They show maximum penetration for normal bullet dimensions and twist rates.

With the right twist and large cases, today monolithic bullets show no problems. They are improved by using better materials (soft copper), driving bands for less fouling and a better gas seal, but sometimes they have one drawback: To customize conventional factory rifles you are often dependent on the magazine capacity. That requires a belted H&H case and restricts the cartridge to .458 Lott, Watts or Ackley or the .470 Capstick. An excellent load is a .458 500 gr at the "magic" velocity of 2400 f/s. I tried hard to find a load with safe pressure and it is only possible with short bullets like Speer or Woodleigh, modern High Energy powders and a little powder compression. There is no room for the extra length of monometals.

There is an increasing number of monometal deforming bullets on the market. They are made from soft copper with some kind of a hollow point nose for a controlled expansion. These bullets are very effective with respect to penetration and creating deep wound channels. But to overcome the drawback of the greater length, manufacturers recommend the use of lighter bullets, the greater muzzle velocity would compensate for the lower mass. This can accepted for normal hunting conditions, but applied to non-deforming bullets (solids) for dangerous game hunting it can become a desaster. The lower sectional density results in less penetration (see Penetration Index), because less weight normally can not compensated by more muzzle velocity in safe pressure limits.

Nowadays also modern nondeforming monometal solids (Flat nose e.a.) are often made from soft copper. They show very stable penetration (see chapter on SuperPenetrator), but hitting very hard bone the may be compressed by the jam pressure and shortened and so loosing some penetration.

About Solids, FMJ and Monolithics
Testing, made by Ch. Haley, African Hunter, Vol.5 No.6 Dec.99 show the good performance of modern FMJ bullets. 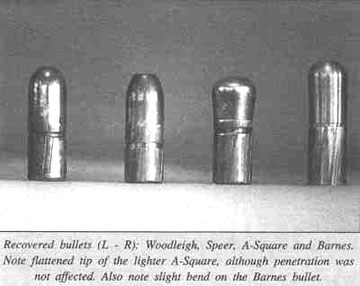 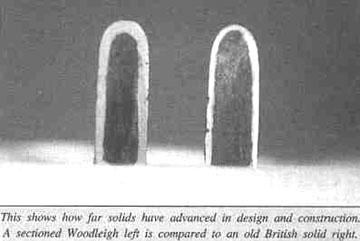 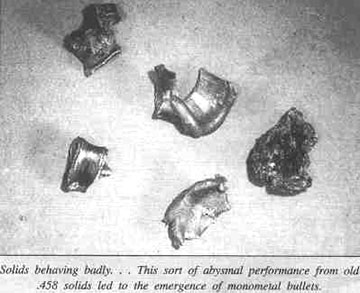 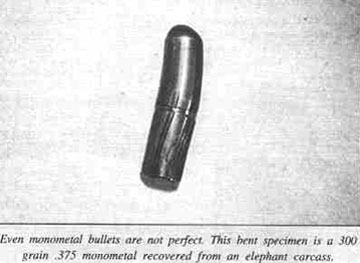 Momentum
In some publications the thesis is presented, that the momentum is the property to look on for the penetration ability and performance of bullets. That is not possible. The momentum is physically related to the kinetic energy (divided by the velocity) and does not primarily control the penetration. You can proof it: Take a rock of 3 kg from the ground and speed up your walking speed to 5 miles per hour, now it possesses the same momentum as a hot .458 bullet. But throwing it on an animal, it is evident that there will be no effect.

Newton´s law of conservation of the momentum tells us, that after a shot the rifle has the same momentum as the bullet. We know the difference.

In general, the momentum of a moving body says nothing about its penetration through a medium. Look at the momentum and penetration of an arrow or a slow moving 3 kg rock, or remember the same momentum of a recoiling rifle and the launched bullet. The momentum is useful if we take into consideration the interaction of two bodies, for instance "what makes a silhouette fall". A man can compensate the momentum of a .308 bullet standing on one leg, if he wears a protecting vest. That a charging lion is pushed back in the air by the bullets momentum is a fairy tale. With good body shots an animal falls onto the side of the bullet´s entrance, it is not pushed back by the bullets momentum.

A projectile will penetrate, as long as the shear stress exerted by the projectile on the target is greater than the shear strength of the target. Shear stress is defined as the force of the projectile divided by the projectile's cross sectional area. The penetration depth is determined by the interaction with the medium. If there is no interaction, the penetration would be infinite, also if the retarding force is compensated by a rocket engine. The mechanism of the deceleration is very complex and hardly to calculate from basic figures because we do not know the drag functions in the different media a bullet passes going through an animal.

In summary, more penetration for the high velocity bullet. From physics: The force, which is needed to penetrate, is F=d(m*v)/dt. That means, the force equals the change in momentum with time. And is higher with higher velocity.

If we have a given frontal area and sectional density, the traveling bullet has to compensate for the decelerating forces acting on its surface. This working force (force times way, equals energy) has to be delivered by the kinetic energy of the bullet. That is another important feature for penetration.

For a rough comparison we can use the penetration index. It is calculated from the kinetic energy, sectional density and frontal area.(See table in the main part).