I booked my Mongolia hunt with The Hunting Consortium and decided to not only hunt the two Ibex that inhabit this country but the beautiful Siberian Roe Deer as well. I flew from DFW to Seoul to Ulaanbator Mongolia then overnighted in a hotel. The next day we flew to Khovd to the Altai mountains. This area is beautiful but incredibly rugged! Driving straight up the Rocky Mountain on the way to camp we met one of the guides along the mountain top. We stopped and visited and in Mongolian tradition broke out the vodka to toast what would be a successful hunt. Each person takes a shot of vodka, dips their ring finger in it, flicks the vodka in the air with the ring finger, then drinks the shot. They said there were a few ibex down the mountain so I got the Swaro spotting scope out. It was not even the first hunting day but really a travel day on my itinerary but there were some good Ibex there and we decided to head down the mountain. Did I mention we have not yet made it to camp? We slid down some parts of this rugged mountain then finally get in somewhat of a spot to take a look at them. My Swaro binos ranged them at 380. I decided not to let this grand opportunity go because this is a very harsh place and who knows what tomorrow may bring. I dialed my Tikka 7mm for the range and didn’t worry about the wind as it was not too windy. I was on very sharp rocks with my Harris bipod and after several minutes of waiting for the right shot and to catch my breath I squeezed off the 160gr Barnes. I connected on an over 10 year old Altai Ibex! Did I mention we never made it to camp? It was getting late but we got down to the old billy and got pics and caping done. Unfortunately it got dark on us climbing out. It was really rough getting out of there with extremely steep cliffs and loose rocks. The guides decided not to continue to camp but set up a fly camp here on the side of the mountain. On the side of the mountain! My tent was sideways and I was sliding down hill in my sleeping bag all night! I think I may have said we never made it to camp!
We are off to the Gobi desert for the Ibex that lives there. It will take two days driving to get there. 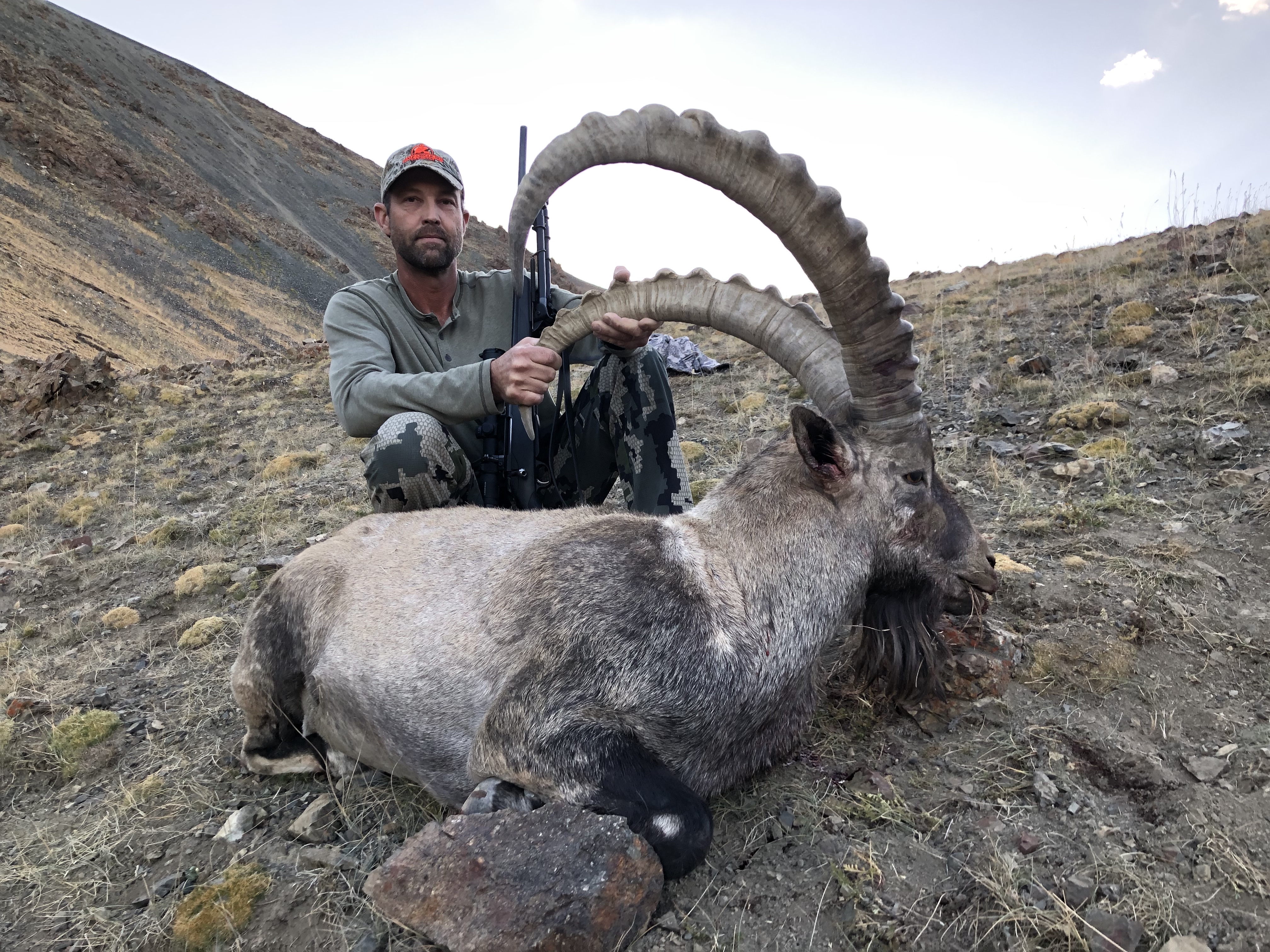 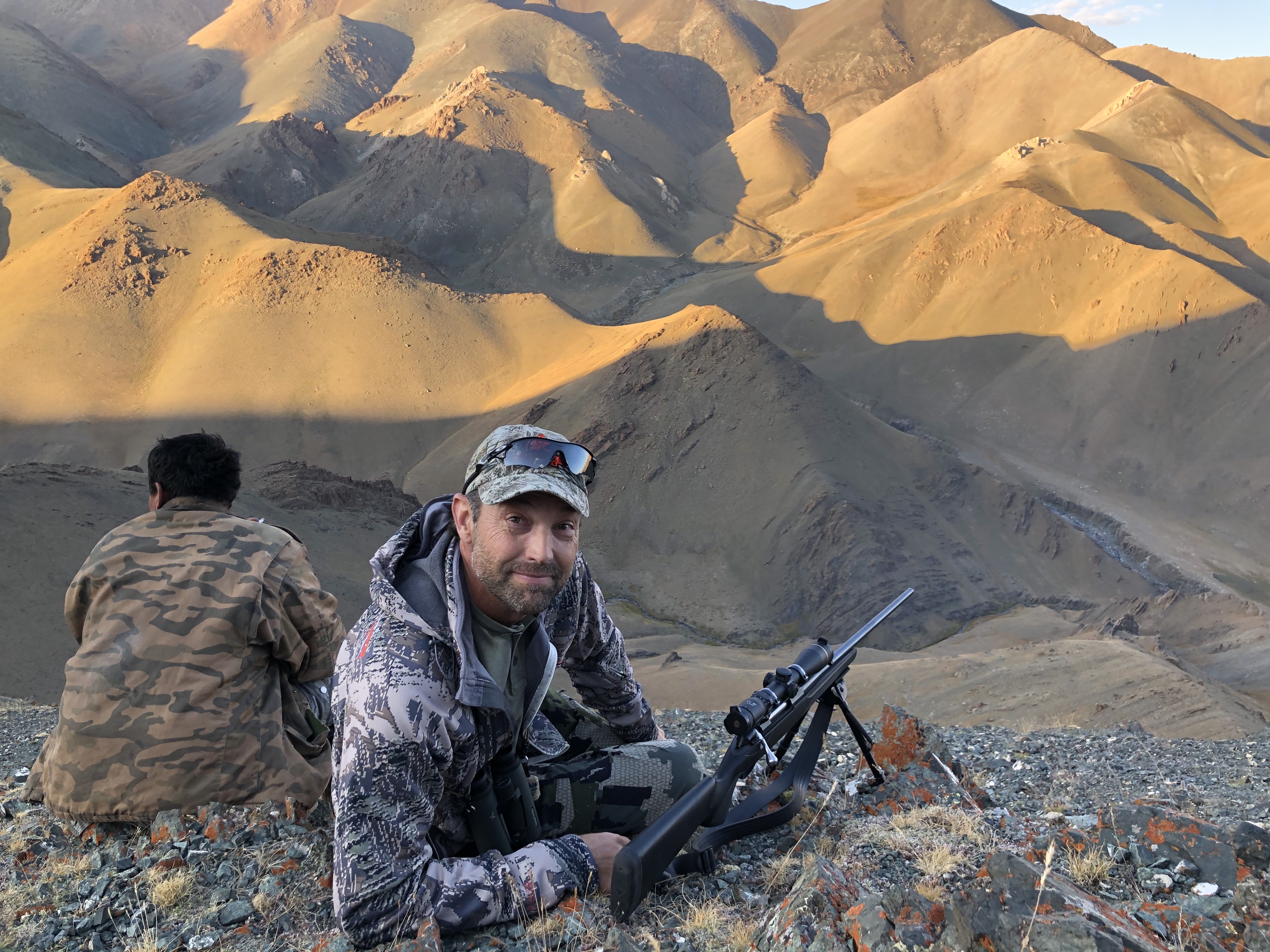 WOW Philip. Need to hear more on this trip!

Hurry up with it then! Siberian Roe is a bucket list hunt for me.....

Never pass on a dance with Lady Luck! Fine job Phillip!
"Montana seems to be what a small boy would think Texas is like from hearing Texans" John Steinbeck

WOW! A mighty fine trophy! You must have great karma! I need some of that!
Best of luck on the Gobi desert ibex and Siberian roe!
Africa on my mind.

Handsome trophy! That certainly is some steep terrain.

Congratulations. Hope is a great adventure.

Steep and rugged, just the way they seem to like it. That is a beautiful trophy. Not making it to camp makes a pretty cool story. Congrats
Bruce

Beautiful animal - and never ever stiff the hunting Gods.
"We sleep soundly in our beds because rough men stand ready in the night to visit violence on those who would do us harm" American Novelist - W. Churchill

Great shooting Phillip, awesome ibex! Will be tuned in for the next installment.
Nathan T.

Beautiful scenery and beautiful animal. Best of more luck on your trip. Since I travel to China once a month curious what a hunt like this costs?
Ed

A great way to start a hunt! Very nice shooting too!

What a way to start a hunt! Fantastic Ibex and scenery. Looking forward to the rest of the report!

Smart move. Take what you are given.
Fly camp on the side of a mountain.... Sure beats falling down and getting hurt.

Great trophy, congrats! Be safe and enjoy the rest of your trip, looking forward to the future reports and pics.

Beautiful animal! That terrain is also very rugged and beautiful. Good luck on the rest of your hunt.

Fantastic! What a great start to a unique adventure.
"When my friends tell me that I have led a remarkable life, I have to admit having done my best to make it so" - John Kingsley-Heath

KYRGYZTAN: Back From Hunting In Kyrgyzstan
2