I would like to load a batch of moderate .375 H&H hunting ammunition, with a goal to making my fairly light weight Sako AV into something equivalent to a 9.3x62. Moderate bullet weight, somewhat less recoil, but enough power to get the job done within 200 meters on anything I'l hunt here in Canada, mostly moose, elk and black bear in the bush, no long distance shooting.
I have a large stash of Hornady 270 grain bullets, a box each of Sierra 250 gr. and Speer 235 gr. and would like to propel them at 2300 to 2400 fps. Powders of moderate burning rate that I currently have on hand are Varget and IMR3031 and H4350. Any suggestions about powder type and charge or any concerns about my plan?

My favorite "Bush Load" in the H&H (is there any other .375 even worth mentioning ? LOL) is the Hornady Round nose soft (or "solid") at 2400 fps.
Hornady seems to be slowing or stopping production of their excellent heavy-for-caliber round nose bullets - very sad.
However, all is not lost because I've also had excellent success with the 300 gr Nosler Partition at 2400 fps.
My wife has a Law Degree and advises against posting powder charges on the Internet so, I will just say that I use Winchester brass, Federal 215 primer and the charge weight of Dupont IMR 4350 powder shown in Hornady manuals to give 2400 fps with their described bullet/s.

With the Hndy RNSP and NP brands both at that sedate speed, I have taken many animals in Alaska and Africa both.
I can hit a small dinner plate at 300 meters/yards, from the sticks with it by means of my 4x scope (with a slight "hold-over").
And, zeroed at 100, it is still nearly spot on for elevation at 200 meters/yards.
Recoil is noticeably just slightly less than factory spec 300 grain ammunition (I believe factory 300 gr ammunition is usually around 2550 fps).
At 2400 fps (muzzle velocity) the round nose bullet hits hard and mushrooms half way down the shank, "just like in the movies" so to speak.
It does not always exit large plains game such as blue wildebeest, zebra etc., but it usually does and it virtually always exits smaller PG such as impala, reedbuck, bushbuck, impala, warthog, etc., typically leaving approximately only a golf ball size exit wound.
I've never lost an animal that I have shot with it and do not recall ever having to track one afterwards either, here or in Africa.
It has been consistently so accurate that I have shot the heads off many grouse with same out to 15 or 20 paces, incident to hunting moose, caribou or deer in my home state.

Regarding the .375 and 270 grain bullet loading, I only have used it very little on anything larger than a jack rabbit and at that, only in Alaska for antlered game (and Nevada but for only vermin shooting there) and at that, I only used the 270 grain at full factory velocity (wonderful load if you might have to take a long shot across the tundra etc.)
However, I believe for hunting everything in the so called "Plains Game" category of African animals (Giraffe to duiker), in all conditions (4 yards to 400 yards), it seems to me that a 270 grain spitzer or semi-spitzer (such as the best of the premium soft points: Swift A-Frame - for instance) would be as close to a do-it-all hunting rifle as one could dream up.

Last but not least, on deer and caribou I have used the 235 grain Speer JSP which is a semi-spitzer and will shoot as flat as a .30-06 / 150 grain.
I confess to only having used it at well more that the velocity you are wanting but even with that, I did not load them "hot" and yet they were not overly destructive on meat, much to my preference.
Many people overlook the 235 grain Speer, I suppose because it is light for many Africa species, and N. America moose, grizzly or bison but, for hunting in places like Namibia, South Africa's Eastern Cape (and up here in Alaska for caribou or sheep/mountain goat out in the open), it makes a very fine long-shooter out of your scoped .375 H&H.

This morning's 4 shots of espresso are wearing off so I will clam-up now.
In closing, I submit that the .375 H&H is the world's finest hunting cartridge.
All the rest of the .37 caliber cartridges in the world combined do not offer any advantage over the original H&H as far as I'm concerned, beginning with their lack of availability in far flung places such as remote bush Alaska/bush Canada/bush Africa/Bush Northern Australia.
I always like to say "If you cannot bag your beast with the H&H version, your cartridge is fine, It is only your aim that needs improvement" etc., etc.

I'm watch this with interst as I'm looking to build a round for larger uk deer to keep in practise with my 375 think 235 grain Barnes or Seirras and trail boss but would love to hear suggestions.

I'm going to load some test cartridges with 59 gr. of IMR3031 and the Hornady 270 RN and see what happens. My Lyman manual lists that as a "starting" load @ 2370 fps. Looks about right, I just hope it shoots accurately.

I haven't tried them yet but I would summize that Sierra's 250gr Spitzer BT bullet would be an excellent load choice.
John 3:16

I tore my rotator cuff on my shooting shoulder last week, so I sent my Sako AV .375 off for a new Limbsaver recoil pad while I heal. When that's done I hope the new "lower recoil" loads shoot OK and don't beat up my shoulder too much, I'm going into shooting withdrawal!

I just recently worked up a load with reduced harge for my .375. Here is the dope:

Recoil is less than my .270 with the heavy rifle, but it does produce a significant muzzle flash. Attched is a pic of a 5 shot group at 100yds. 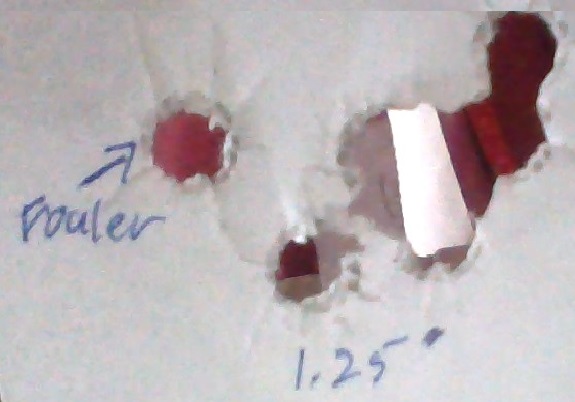 Interestingly enough, this load is dead on without a scope adjustment from my 270gr SP setting. It hits about 3in high at 100 and dead on at 200yds. Hope this proves helpful or at least enlightning.

My favorite deer load in the .375 (going back to 1987) has been the 235gr Speer and 66 grains of IMR 4895. Kills deer and pigs well without undue mess.
Captain of the Luddite Society
https://www.africahunting.com/threads/zimbabwe-hunting-the-bvc-in-zimbabwe-for-buffalo-john-sharp-safaris-exceeding-expectations.53046/

Have you thought about Woodleigh bullets? I use them in my 404 Jeffery and they are exceptionally accurate.
I will be getting some Woodleighs in various bullet weights for my 358 NM also.

To add to this topic, I just got back from Africa and was using the Hornady 270 grain SP loaded to 2500 fps with vht 140.(hunt report in the works) On deer sized game (impala, bushbuck) from 100 to 200 yards nothing moved after it was hit but there was a fairly significant exit wound, close to 2". On elk sized game, (wildebeste, nyala is a small elk/big deer) taken at 90 and between 275 and 325 yards no bullet exit, both dead right there. The bullet I recovered from the nyala opend up just fine and did what it was meant to do, so they should work just fine in your loads. Good Luck!

I have been messing around with the 270 grain blems Midway is selling, I strongly suspect they are the Hornady round nose. I'm loading 60 grains of H4895 in Remington brass with Federal 215 primers. I'm getting right at 2400 fps with good accuracy out to 200 yards and pretty mild recoil. This is very similar to the velocity I'm getting in my 9,3x62 with the 270 grain Speer bullet and a max load of IMR4350.

Being a Huge fan of the 375HH and satisfied with the performance of Win 760 pushing a 300g Sierra I started messing with 235g Speers and some Re Loader 15 and getting some great results. But a trip to the range to finalize the 200yd Zero range was cut short by a Scope that decided not to cooperate.So this week with my Trusty Leupold re-mounted I'll be back at the range finish up the project.
Be Yourself Everyone Else Is Taken

I just recently worked up a load with reduced harge for my .375. Here is the dope:

Recoil is less than my .270 with the heavy rifle, but it does produce a significant muzzle flash. Attched is a pic of a 5 shot group at 100yds. View attachment 151233

Interestingly enough, this load is dead on without a scope adjustment from my 270gr SP setting. It hits about 3in high at 100 and dead on at 200yds. Hope this proves helpful or at least enlightning.
Click to expand...

I know @Velo Dog already mentioned the 235 Speer SP. With a standard load of Varget, it on comes back only slightly more than a .30-06 loaded with 165s. Varget will get you somewhere in the neighborhood of 2700fps with that round. Use the speers to practice with, as they are one of the most inexpensive .375 diameter bullets, then go buy yourself a box of 235 grain Barnes TSX for hunting. They will take down anything you are likely to encounter in Canada and will kill anything in North America, although I would prefere a 270 or 300 for the big bears. Good luck!
"I am not a good shot, but I shoot often" - Theodore Roosevelt

thanks for all the replies and tips! I have some good ideas to try.

I've not used the 235 gr Speer on any game, because they performed so poorly on my water jug test fires, particularly when compared to the Sierra 250 gr SBT. Appears some have used them, at least at reduced velocity and got good performance. I prefer 75 gr of IMR 4064 and the 250 gr Sierra. Trajectory is comparable to a 150 gr 30-06, and I can load with 250 gr Bitterroots if I'm after tougher game, with no need to resight the rifle.
You must log in or register to reply here.