Beautiful gun! That's not an entry level rifle, with its pretty receiver and that pivot mount! I think you are really going to like it. I recently purchased a Merkel 140 too. I am sure you are wondering about the recoil - you will certainly know you pulled the trigger, but it won't hurt you. I recommend using sticks at the range. Its recoil is, to me, less then my 9lb 375 Ruger.

for fellow Canucks, I bought this one used, from a hunter who planned to use it in Africa but who had a multi-country agenda and who decided permits etc. were just too difficult to arrange. So it was sighted in, practised with a tiny bit, and put in the safe. It was sold originally by Wolverine Supplies in Virden, MB. They really know African hunting and guns, highly recommended!

Kind of figured that , I've dealt with John and his guys abit over a few years .
He is top notch and stand behinds what he sells, and supports the Canadian shooting community well. Thanks for the clarification. Good hunting!
Cheers
Pat

For whatever its worth, I think a dbl. in.450- 400 3" or 3 1/4" is one of the most enjoyable rifles to shoot that there is. I think with the woodleigh hydros you will have the (almost) perfect rifle. Congradulations!

Thanks for all the encouraging words! I think I'm going to like this rifle. I just took it shooting, and used a rest this time. A half dozen shots with factory loads and the Burris Red dot sight and two shots with irons, all at 50 meters. I think it has potential. What sort of groups should I expect? I'm pretty sure I have some work to do on my shooting technique. I'll also need a shorter front sight by the look of the two shots at the bottom. 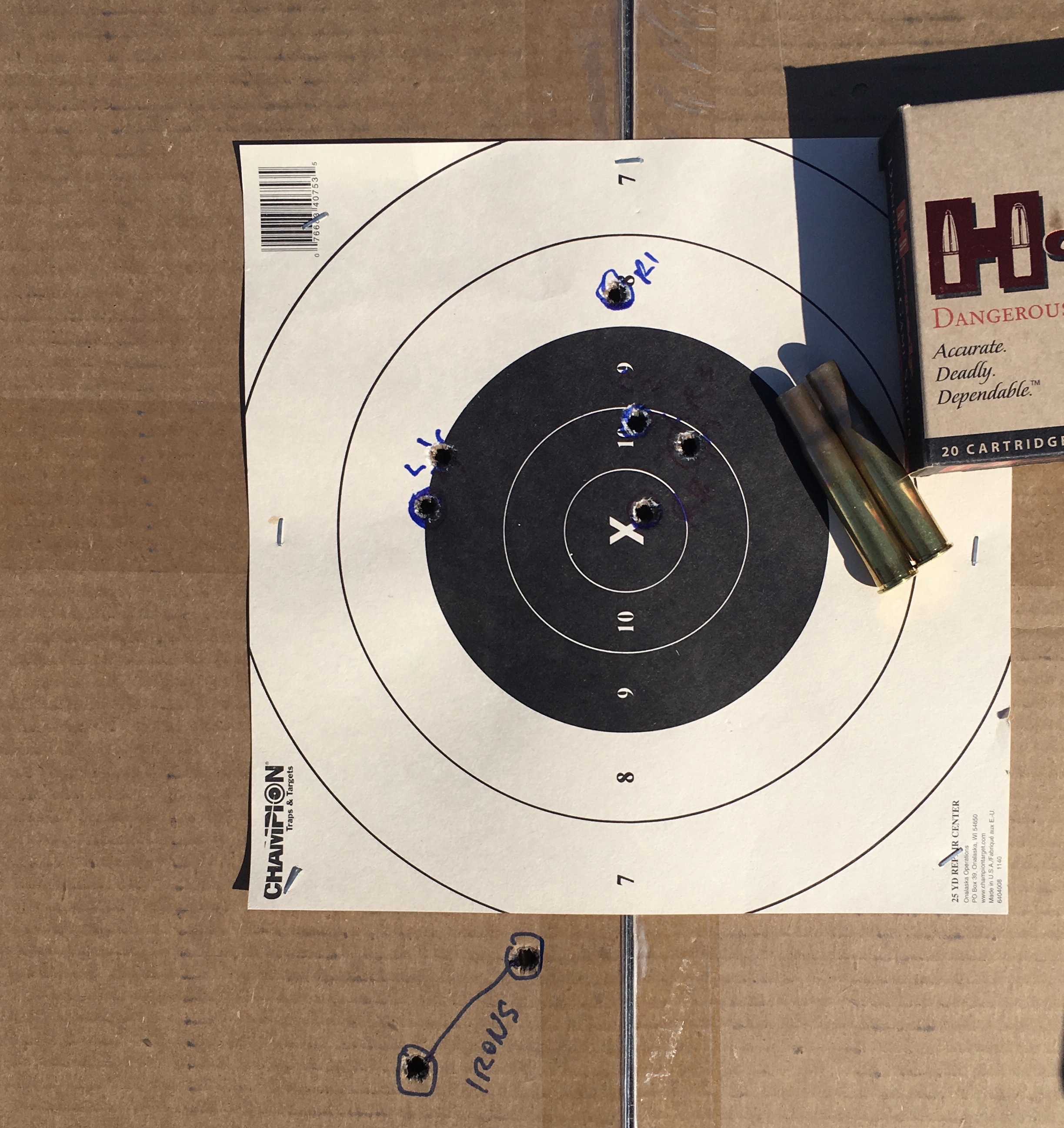 Very nice! My next Gun and caliber!! With so many bolt guns in the safe already though , it’s so hard to justify a double. I keep talking myself out of it.

My Merkel shot low too. I shipped it to NECG yesterday to get a lower front sight. I sounds like they have a backlog of a few months, so I will report back when I receive it.

It looks like Merkel has improved the stock a bit early ones could be a bit hard on recoil in the. 470.

Awesome, beautiful rifle. I have always thought the 450-400 would be a nice caliber in a double rifle. Hope you get to use it for what it was built.

Another group shot today at 50 yds, using Burris red dot sight, Hornady factory loads. I was shooting while standing, resting my wrist on a blanket over a stepladder. Group size is certainly bigger than the rifle is capable of, I'm pretty sure I was wiggling side to side a couple of finger widths anyway. As a "control", using the same technique and shooting a familiar and fairly accurate .22 I shot a 2" group with the same stance and hold. What is a reasonable group size for a double of this type at 50 yds? comments anyone? 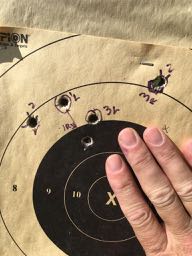 CAustin said:
Ivory in your future I see!!
Click to expand...

of everything ive yet to do but wont be able to squeeze them in,im completly satisfied and happy with what we have accomplished,the fact that i have my ivory makes it so.

Beautiful rifle, pardon my ignorance but is the 450/400 still a blackpowder charge or have they been converted to smokeless these days?

JPbowhunter said:
Beautiful rifle, pardon my ignorance but is the 450/400 still a blackpowder charge or have they been converted to smokeless these days?
Click to expand...

One of the original conversions to smokeless
"When my friends tell me that I have led a remarkable life, I have to admit having done my best to make it so" - John Kingsley-Heath

My understanding is that the 450-400 3-1/4" was a blackpowder cartridge, and the modern 3" version was designed by Jeffery for use exclusively with smokeless powder.
from Wikipedia:
"The .450/400 3¼-inch NE conversion was not initially entirely successful, under the increased pressures of the cordite loading the long neck could stick in the chamber causing the rim to pull off at extraction,[2] a problem not encountered under the milder black powder loadings. To counter this, the rim was increased in thickness to .042-inches. W.J. Jeffery & Co further improved the cartridge by reducing the length of the case to 3-inches and moving the neck further forward, creating the .450/400 3-inch NE."
You must log in or register to reply here.