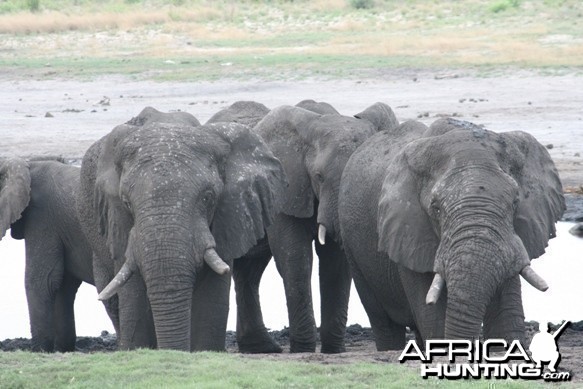 Editor's note: The current elephant debate and the continued éƒ½takeholders consultations (with those participants being most vociferous who have the smallest or no stake to hold) is in my modest opinion a waste of taxpayers funds. Let me remind you that 21 international experts sat down to discuss the issue more than a year ago. Just to refresh your memory here are their conclusions again:

In several African countries, elephant populations are growing at an alarming rate, as high as 5-10% per annum. Such population expansion is not sustainable and, despite the huge tracts of land open to elephants, it is already having a devastating effect on a number of unique ecosystems and the biodiversity (plant and animal) within them. To avoid an ecological catastrophe culminating in a mass die-off of elephants, urgent action is needed to reduce elephant numbers. Even then, further long-term population control strategies must be implemented if the apocalypse is to be prevented rather than just postponed.

A consultation of twenty-one international experts on the é¼Žontrol of Wild Elephant Populations at Utrecht University's Faculty of Veterinary Medicine in Beekbergen, The Netherlands from 7th 8th November, 2003 came to the following conclusions:

1. In many of the more then 35 African countries that are home to wild elephants, populations are or have historically been endangered by poaching and habitat destruction. However, in several parks where the elephants are well protected, populations are now growing at such a rate that other animal species and plants are being driven to extinction and, due to destruction of the vegetation, a mass die-off of elephant is fast becoming inevitable.

2. The approach to controlling elephant numbers depends primarily on the aim of a given park; i.e. is it primarily an elephant sanctuary or an area dedicated to conserving as great as possible a diversity of species and habitats. If the aim is biodiversity and the elephant population density is already well above the carrying capacity, immediate population reduction is the only answer. Although this could, in theory, be achieved by translocating groups of elephants to new areas, translocation is expensive, time-consuming and logistically complex and, moreover, there are very few areas left to accommodate the large numbers of animals involved. Indeed, in some areas, the numbers of elephants are so large, that the only realistic way of bringing the population under control is culling.

3. Contraceptive techniques have been developed that successfully control population growth in feral horses and are being developed for pest species such as mice and pos- sums. While such anti-fertility treatments are very useful for reducing the rate of population growth in the longer term, they are certainly not suitable for reducing numbers of a longlived and late reproducing species, like the elephant, in the short term.

4. Techniques exist to exert reversible or irreversible contraception on male and/or female animals. Indeed, there are already encouraging results from field trials of anti-zona pellucida vaccination of female elephants (a treatment that should block fertilization) and pilot trials have begun with a GnRH vaccine in male elephants (vaccination should block sperm production and suppress sexual behavior in males and prevent follicle development and ovulation in females). Further studies are needed to examine the effects, efficacy, reversibility and in-field practicality of these and other putative contraceptives. Ideally, the bulk of this development will be achieved using in vitro or other-species models, since the 4 year calving interval in elephants means that field trials yield meaningful results only slowly.

5. The way in which the presence and behavior of a dominant bull suppresses reproductive activity in other male elephants and, at least in captivity, can lead to temporary infertility should be investigated. This may lead to novel contraceptive approaches tailored to male elephants.

6. Demographic models need to be developed, using existing and new, targeted field data, to predict the effects of elephant removal and/or contraception on population growth and conservation targets. Field data on the natural factors, such as food resources, that affect population growth will improve the accuracy of these models, which could then be used to identify the best strategy, and the proportion of animals that need to be included, to control a given population.

The expert group makes a call for international political will and financial support to:
7. Preserve eco-systems in Africa
a) By protective measures for animals and plants,
b) By urgent reduction of elephant numbers where needed, through translocation and culling.
c) By reducing elephant population growth via fertility control
8. Study population dynamics in elephants and the factors that affect it, so as to enable reliable modeling of the effects of protective and control measures on population growth, social structure and behavior
9. Improve existing and develop novel methods of contraception for the elephant.

Editor's note: No more needs to be said actions are however essential, far more than additional and expensive symposiums!
Last edited by a moderator: Dec 1, 2016
Gerhard R Damm
AFRICAN INDABA - Dedicated to the People & Wildlife of Africa
You must log in or register to reply here.

Elephants Are Not Human - They Are Animals, And All Animal Populations Need To Be Managed

African Elephant How To Die