Man-eating tiger who is believed to have killed 13 people is shot dead in India after major hunt:

A tigress in India who is suspected of having killed at least 13 people over two years was shot and killed in India after a hunt Friday night, officials said.

The tigress, who was believed to be six years old, was also known as T-1. Rangers were called to a place near Borati village after residents spotted the man-eating tiger, the BBC reported. The plan was to shoot the tiger with a tranquilizer by a patrol team but the tigress charged. The tigress was killed by a single shot.

Residents who lived in the area were said to be overjoyed after learning of the tiger’s death, The New York Times reported. However, wildlife activists did not feel the same.

“This is a coldblooded murder,” Jerryl Banait, an advocate for animal rights, said. 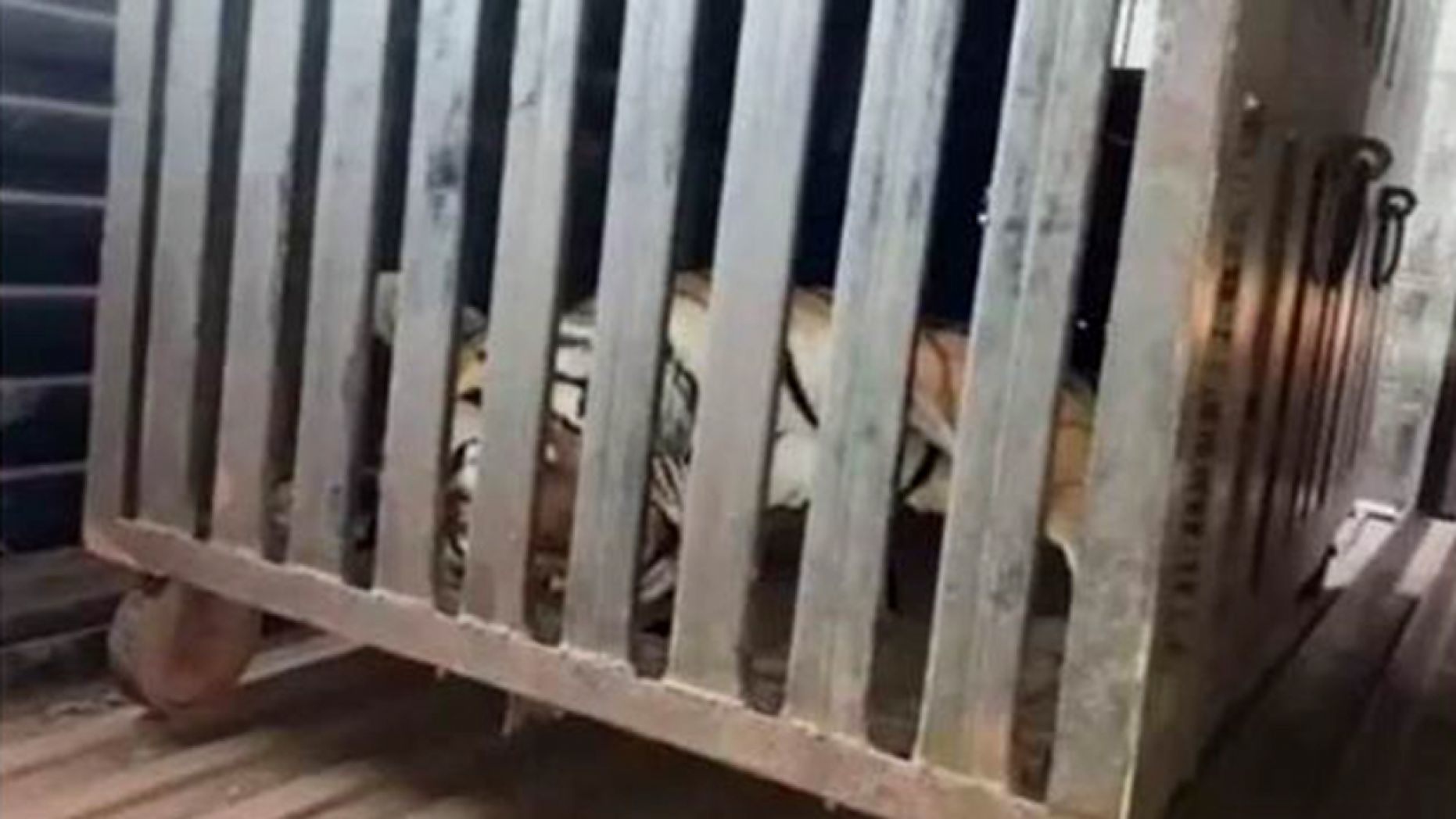 The tiger was shot and killed on Friday night, Nov. 2, 2018. (Indian Forestry Dept.)
(They are still so terrified of this cat they kept it's dead body in a cage!)

A massive search operation involving dozens of police and forestry officials was launched to find T-1 or “Avni” and kill her. Officials even used Calvin Klein cologne in an attempt to lure the big cat.

The perfume contains a pheromone called civetone that can attract big cats, according to experts. Initially sourced from the scent glands of the civet, a small cat-like mammal, civetone is now typically manufactured synthetically.

Miguel Ordeñana, a wildlife biologist and community science manager at the Natural History Museum of Los Angeles told Fox News that the scent can prove an effective lure for carnivores such as tigers. “It’s a musky smell that really makes them think about another competitor in the ecosystem or a potential mate,” he said. “For territorial carnivores, it’s something that they really take notice of.”

Calvin Klein’s cologne Obsession was reportedly used successfully to lure a tiger in the southern Indian state of Tamil Nadu.

The BBC reported that T-1 and her two cubs killed three people in Pandharkawada, located in the Yavatmal district in India. The tigress killed another 10 people since 2016, leaving residents fearing for their lives. Officials were able to determine a tiger killed the people by using DNA tests and discovering tiger saliva in the victims’ wounds.

An autopsy will be performed on the tigress.
B

What a pity. There are coutless people in India but not many tigers left. What‘s the problem if a tiger kills a few thousand of them? I agree with you, no problem at all.

So nobody here sees the real story...
For Next years Leopard hunt I'm bathing in Calvin Klein cologne
V

Better to bath an wildlife activist in Calvin Klein cologne and use him as a bait...

All these years I’ve been using scent eliminators, cover scents, Lures of every kind. Hundreds of dollars of scent control products endorsed by legendary hunters…all this time my wife was right on the money with her stocking stuffer Christmas cologne(s)

HWL said:
Better to bath an wildlife activist in Calvin Klein cologne and use him as a bait...
Click to expand...

and drag him/her up and down the game trails...

Two man-eating female tigers were caught and killed in India this weekend – one crushed by villagers using a tractor and the other shot to death after being lured out of her hiding place with a bottle of Calvin Klein cologne, officials said.

Officials at the Dubhwa Tiger Reserve in the Lakhimpur Khiria area said a tigress there killed a farmer late Sunday night and villagers who live inside the core zone of the reserve quickly sought retribution.


Forest officer Kahavir Kaujlagi said Monday the villagers encircled the animal and, when the big cat tried to escape, the villagers crushed her under the wheels of a tractor.

The villagers said the tiger had also injured another person in an attack about 10 days before Sunday’s fatal mauling.

Killing a tiger in protected areas is illegal, however, and the Dubhwa Tiger Reserve’s director said the case would be registered with police.

On Friday, an infamous man-eating tiger was shot and killed in the western Maharashtra state. The serial killer cat is blamed in the deaths of at least 13 people during the last two years.

Officials said the tiger evaded capture at least four times and had terrified inhabitants living near vast swaths of forest where it mauled herders and farmers, along with cows, goats, and horses.

According to the New York Times, the hunt for the female tiger grew into a sprawling, military-style operation, with hundreds of people and a team of specially trained Indian elephants with sharpshooters mounted on their backs.

To lure the tiger out of her hiding place, officials stirred up a strange brew: Calvin Klein’s Obsession cologne mixed with tiger urine.

Tiger attacks in India are common, with government data from 2017 showing an average of more than one person killed per day in conflict with a wild tiger or elephant during the previous three years. A 2014 census pegged the country's tiger population at 2,226.

Fred Gunner said:
An autopsy will be performed on the tigress.
Click to expand...

We do not perform autopsies on animals - it's called a necropsy. I really wish English grammar were a hard requirement for j-schools.
"Only accurate rifles are interesting." -- Townsend Whelen

If you want to live within a TIGER reserve you have to accept the possibility that you could be part of the food chain. Seeking retribution under the circumstances is just being idiotic. FIFO! (fit in or...)

But onto the interesting part of cats & scent. This reminds me of a visit from a Lady friend of my wife, tagging her partner along on his first holiday to Africa.
Mr G is a fashionable gent and spend more time in front of the mirror than his lady friend & smelled like he took a bath in a perfume shop I have to add.
On an outing to a local lion park, we eventually reached Mufassa, the star of the park, a raised from cub to adult male lion that would come up to the keeper & affectionately brush against the fence. I have to admit, it is an experience to see a lion act like a house cat less than a meter away.
The lion turned and promptly sprayed our guest standing next to the guide when he took a knee for the close-up camera shot!
I had a good chuckle and only thought if the right term to use to describe his situation would be to being pissed on or being pissed off.

At the time, we brushed it off as a dominance thing with the keeper being a female and the lion identifying the male presence, however, the scent / perfume most probably had the greatest influence. Thanks for the article!

HWL said:
Better to bath an wildlife activist in Calvin Klein cologne and use him as a bait...

Fred Gunner said:
and drag him/her up and down the game trails...
Click to expand...

@Fred Gunner
You could be charge with polluting the bush and game trails dragging an activist.
Bob
H

Just letting them practice the ultimate in recycling.

Jaws said:
If you want to live within a TIGER reserve you have to accept the possibility that you could be part of the food chain. Seeking retribution under the circumstances is just being idiotic. FIFO! (fit in or...)
Click to expand...

I think I'm probably not going out on a limb here in asserting that these villages were located in these areas LONG before they were designated as tiger reserves. How would one go about dislocating a people from their homes without being like China?
"Only accurate rifles are interesting." -- Townsend Whelen

A theory that is good on paper but doesn't work out in real life is a terrible theory. Reality is always the final arbiter.
You must log in or register to reply here.

Tiger attack deaths rise to 17, Pilibhit villagers lament they have been left to be killed