African Indaba received a note from Dr. Serge Darroze, of the EU-funded é‡˜iodiversity Conservation and Protected Areas Management for the Bafing-Faleme Transboundary Protected Areas in Guinea and Mali about Western Giant Eland in the project areas. One the project's local partners from Eaux et Foré»Žs in Siguiri at the border with Mali sent information that he had found proof of a nucleus of Western Giant Eland. Three of the rare animals had been killed by a poacher, and one month later another three were killed by the same man. The poacher of these six animals seems to have fled to Mali. The skins of the initial three Giant Eland are now kept in the Department des Eaux et Foré»Žs office in Conakry, Guinea. Two skulls of the eland killed in the second incident were recovered and are now with the Bafing-Faleme Protected Area office in Tougu?

This information encouraged the governments of both countries to expand the project areas in Mali and in Guinea westward towards the Bakoye River. The researchers have made several short surveys in the area, and tracks and droppings indicated an apparently fairly large number of animals present between extreme southern Mali and Northern Guinea. They are cooperating with the local communities in the community reserve Manden Oula with 136,000 hectares of communal lands under full or partial protection. Although the Western Giant Eland is already completely protected in both countries, the species is under serious risk since the implementation of the law is very lax. Dr Darroze writes further that another planned study project had to be cancelled due to financial and administrative difficulties.

At the moment the population at high risk all over the area from traditional hunters and there are indications that some unscrupulous hunting safari operators hunted Giant Eland in the Limacol area, south of Kita in Mali, where the species can be found seasonally. There are reports of several animals killed near Kenié¥•a in the south of the Kayes region. There are also indications that this population might be exchanging individuals with the Niokolo Koba population as we have reports of single animals or small herds moving between both areas.

The researchers initiated an awareness campaign with the local people regarding the high conservation value of the species, but success was limited. The cultural importance of traditional hunters initiation rites in the Malink area is very significant and one of the seven levels of achievement includes killing an eland.

On an incidental note, there seems to be some confusion in the minds of the locals between Giant Eland and Giraffe. The researchers believe that this comes from a similarity in the Maninka language between Western Giant Eland æººinan djian" (minan meaning spotted/stripped buck and is being used for bushbuck, and djian means å µiant? and Giraffe æººinan kan djian is translated as å µiant spotted/stripped buck with a long neck? In the 1930s, Roure indicated Giraffe being very rare in the eastern Niokolo area, leaving the conclusion that Giraffe may have existed also in the Bafing area. But when locals now talk about giraffe, they show the picture of the Western Giant Eland.
Last edited by a moderator: Dec 1, 2016
Gerhard R Damm
AFRICAN INDABA - Dedicated to the People & Wildlife of Africa
E 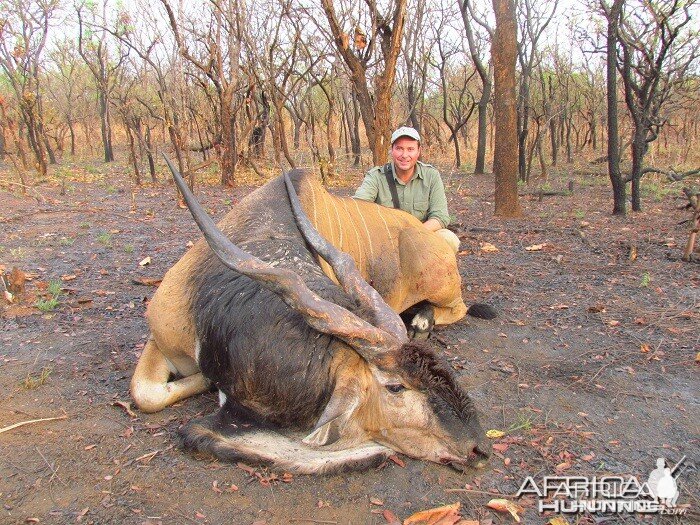 Erik Mararv
You must log in or register to reply here.