I assume that the Merkel S2 that you mentioned Steve Barnett having in the OP is the one I see listed for $9750 and described as "as new". It has a listed weight of 11 lb 4 oz which is quite a bit heavier than Marius' -- I'm not sure why the difference. Also the LOP is 14 3/4 inches

jacques smith said:
There is absolutely nothing wrong with a merkel. It’s a tool perhaps as opposed to a work of art such as a holland and holland from the turn of the century but I know of one with full kit. Shells , cleaning gear ,soft case box and Manuel etc for under 9 k. Duke with gulf breeze firearms has details. Best of luck with your search
Click to expand...

postoak said:
I assume that the Merkel S2 that you mentioned Steve Barnett having in the OP is the one I see listed for $9750 and described as "as new". It has a listed weight of 11 lb 4 oz which is quite a bit heavier than Marius' -- I'm not sure why the difference. Also the LOP is 14 3/4 inches

I still like that Blaser! I do Thank all members that seriously took the time here, as I've received a wealth of information and correspondence. From links, to pm's that were willing to part with their collection, etc. The 500 search still continues...

Oops, I meant Blaser, of course.

This is what started the damn search. 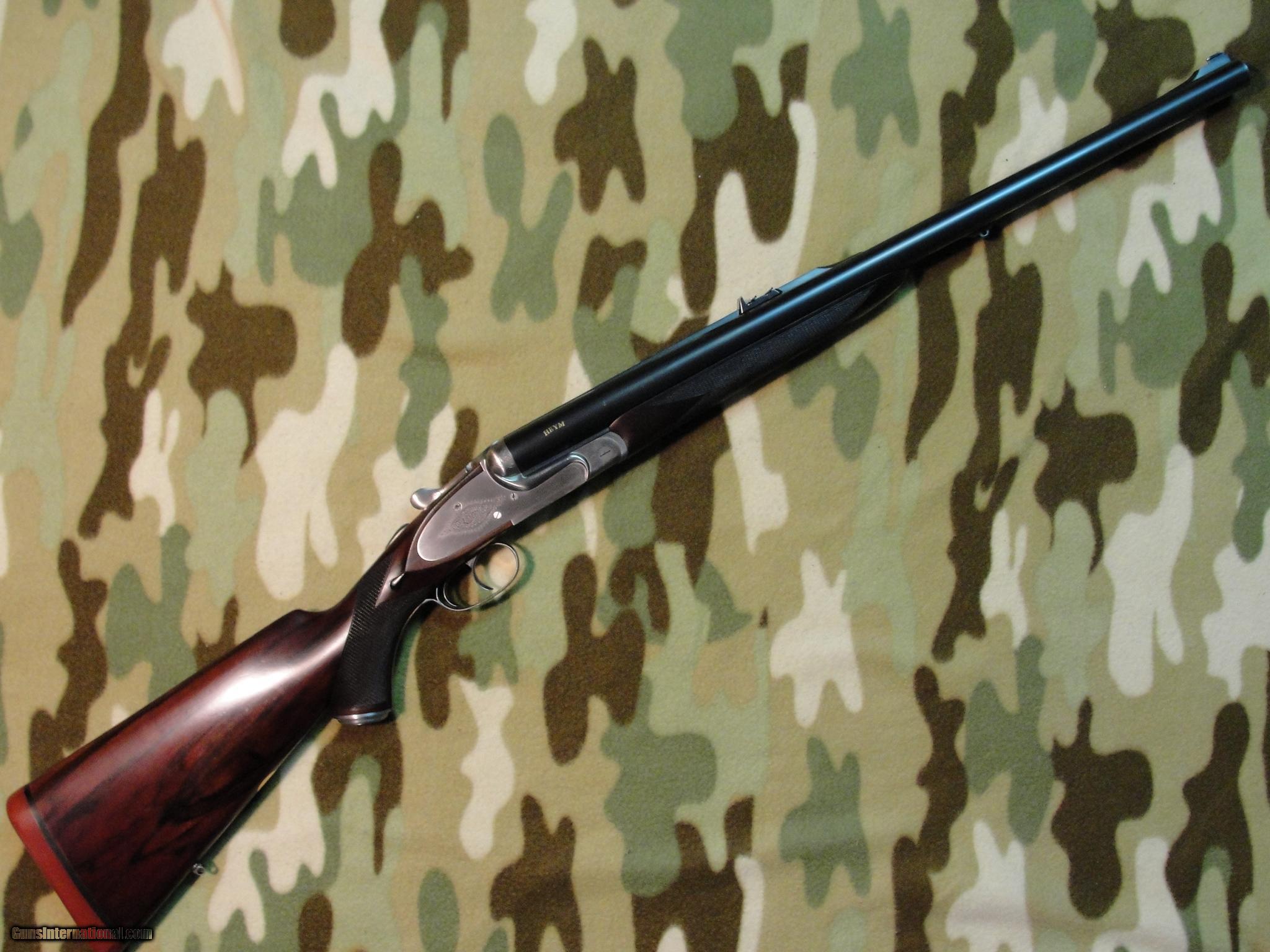 A late reply to Daniel Cary;
I own a Sabatti 92 ejector in 500 NE. It weighed in at 9.3 lbs and with Hornady 570gr factory loads at 2150 fps the recoil is 100 ft lbs and after 8 rounds of factory ammo started breaking the stock. The action tangs started bending up from heat treat stress relief ??? which moved the top edge of the stock into the action and started chipping off the wood. The free play between the trigger and sear disappeared putting pressure toward disengagement after cocking.
After two years of being on the disabled list I located a DR master that sorted it all out and re-regulated it with a custom load running 2050 to 2080 fps. He also added a mercury recoil reducer making it 10.3 lbs. With this new weight and slightly lower velocity the recoil is 75 to 80 ft lbs. In a properly weighing 12 lb 500 NE the recoil would be around 65 ft lbs. Huge difference on the shooter and wood parts.
I believe Sabatti used their shotgun action to build these rifles for Cabela's but a 12 ft lb recoil 12 gauge shotgun is not the same as a large bore dangerous game caliber.
My assumption being if it was built by a gun manufacturer they would not mechanically under build a 500 NE rifle. I was wrong. I didn't have $10K for the used Merkle 140's available at the time so a Sabatti was my only option if I wanted a DR in that caliber.
For me it is now a fun gun in 500 NE. I mainly load reduced power cast lead rounds for it so I can shoot it a lot versus frequent full power rounds and maybe having to repair again or replace a stock.
I've wondered if all Double Rifles in heavy calibers will need a stock replaced after X number of rounds fired. Or if better action designs eliminate that problem.
I doubt PH's fire off a box or two when they are bored between clients.
A wise person once told me, "We shouldn't own some things just because we want one."
Personally, I think God should let everybody that wants a quality DR win a lottery.
Whatever you buy, or have bought, enjoy just owning it even if you never shoot it.

As a collector goes the Blaser S-2 is not in production anymore. They are solid, and if I was going to shoot a 500 NE in a double rifle a lot it would be in a Blaser because of the weight and stock design.

Saying that it doesn't mean they are collectable.

Krieghoffs are available on the used market, but these are harder kicking guns, there is a video from

<p>BUFFALO HUNTERS, Part 3</p> <p>DVD, running time 50 mins.</p> <p>This is the third installment in the buffalo-hunting DVD series by Tanzanian PH Rainer Josch. About four years ago he set out to create a series of DVDs on hunting one variety of buffal

Have her check this video out. Cordelia hunts forest buffalo with a K-gun in 500 NE.

Saying that as much as I love the safety on the Blaser and Krieghoff, the Heym is more desireable. Because you will be able to sell it.

2nd hand Krieghoffs sit on dealers shelves for months, and Blasers for years.

Looking for a Double Rifle?

Why no lever-action rifle for Elephants?
8 9 10

G
gprippers alg22 gprippers wrote on alg22's profile.
Hello! Im in Grants Pass Oregon, 97527 and if you want to do a one time package instead of hassling with selling and SHIPPING one or two boxes at a time...id do $1000 for the package shipped. Mark it sold and give me a shout if you want to accept my offer.
Ive got almost 500 A+ deals on ebay so im legit ( so they tell me! LOL!).
You are also welcome to call as well.
Thanks,
Rob/gotstuffguys
Today at 3:45 AM •••
G
gprippers SAFARIKIDD gprippers wrote on SAFARIKIDD's profile.
Hello! Nice rifle! I have IDENTICAL rifle in 375 H&H so i was wondering what gunsmith did the work on it? Appreciate it and if you decide there is anything you are willing to take in partial trade, let me know. I have quite a few pistols, long guns and sxs & o/u shotguns as well.