Lions & Banning Hunting One Step at a Time

Banning Hunting One Step at a Time
by Steve Scott 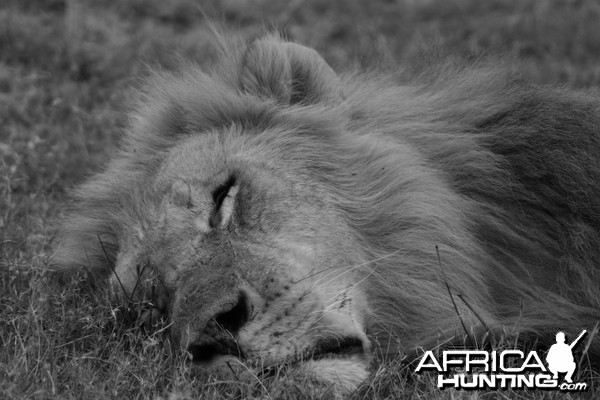 The fate of the African lion will be decided in Washington, D.C.

Responding to a petition by numerous anti-hunting groups, the U.S. Fish and Wildlife Service (USFWS) is considering extending endangered species designation to the African lion. Listing the lion as endangered will not ban its hunting in Africa, but it will prohibit Americans from importing lion trophies into the United States, which will virtually have the same effect. Though most U.S. sportsmen and women will never set foot in Africa, much less hunt lion, the outcome of this issue will have serious implications for the hunting community, both in Africa and here in the United States.

When one realizes groups like the Humane Society of the United States, Humane Society International, Fund for Animals, and others conspire to effectively ban hunting in foreign countries via U.S. regulatory fiat, it is not hard to see that the antis are attacking us from other angles as well. Don't believe it? Then could: (1) closing access to/hunting on large tracts of federal land; (2) using the courts to ban the hunting of wolves, bears, mountain lions, and doves, as well as hunting with dogs or on Sundays; or (3) banning lead in ammunition or serializing every bullet, affect your hunting and/or pocketbook? This move to list the lion under the Endangered Species Act (ESA) is simply a high-profile example of the factual gerrymandering liberals are now using to chip away at the rights and heritage we sportsmen hold dear, and the ESA is one way they are doing it.

There is no doubt African lion numbers are significantly lower than historic levels, even lower than they were a mere thirty years ago. Though numbers vary depending on the source, the estimated population of African lions has fallen from 75,000 in 1980 to between 30,000-39,000 today, with lions occupying about 20 percent of their original range. The primary factor in the decline has been loss of habitat due to human encroachment and the inevitable human-wildlife conflict, although bushmeat snaring, inflated hunting quotas, and improper trophy harvest by tourist hunters have contributed as well to the drop in lion numbers. As hunters, we must devise better methods and controls for sustainable lion harvest which we will address shortly. But in reality, those who are predicting the imminent demise of the lion are either uninformed or lying.

Based upon the best available scientific and commercial data, the African lion is not in danger of extinction. Numerous surveys and studies have been done, and the fact is too many lion populations are secure in too large a part of lion range to consider them on the verge of extinction, as the anti-hunters would lead us to believe. Though the lion may be threatened with endangerment in the foreseeable future in a significant part of its Western and Central African range, it is definitely not threatened in its Southern and Eastern African range where the vast majority of lions are hunted. But then again anti-hunters have never let facts get in the way of an emotional fundraising plea.

In a blog entitled, "Should Trophy Hunting of Lions be Banned?" on Smithsonian.com, Alastair Bland wrote:

"In Kenya, the situation is dire: In 2009, wildlife officials guessed they were losing about 100 lions per year in a national population of just 2,000 and that they might be extinct within 20 years. The causes are multiple but related; loss of habitat and decline of prey species are huge factors which, in turn, mean increased lion conflicts with livestock herdersé nd, often, dead lions; and as numbers drop, the gene pool is dwindling, causing inbreeding and weakened immune systems. Disease outbreaks have also had devastating impacts."

He concludes with, "... societal benefits of hunting in most of Africa are so minimal that the activity, in effect, creates little or no impetus to preserve land for the activity, maintain populations of target animals or stop poaching."

Strong words by Mr. Bland; authoritative and impassioned...the kind of statement that might motivate someone to donate $20 to a "save the lions" fund or send a strongly-worded e-mail to the USFWS. But there is one salient fact the author neglected to convey about hunting and the demise of the lion: Hunting has been banned in Kenya since 1977.

Except for that one tiny fib, Kenya might be a great example of the plight of African wildlife. In Kenya, wildlife has virtually no monetary value; certainly not in the remote areas where most hunting would occur. To the average rural Kenyan, wildlife is competition, competing for resources, sustenance, and survival. Of course poaching is rampant in Kenya. Killing wildlife fills cooking pots and saves crops and cattle of the indigenous. Kenya's wildlife policies are fatally flawed, and to claim Kenya's result occurs in the hunting countries of Africa flies in the face of the facts.

The Value of a Lion

Tourist hunting creates an economic value in wildlife that results in a myriad of benefits for both animals and man, and no species exemplifies this better than the lion.

Lion hunting is expensive. In areas that are generally not frequented by "ecotourists," daily rates for a minimum 21-day safari can exceed $2,500 per day. This is in addition to daily concession fees paid to both local wildlife departments and indigenous communities just to hunt a lion, regardless of the ultimate outcome. And if a hunter is successful, an additional trophy fee is assessed, pushing the cost of some lion hunts in excess of $100,000.

From an economic perspective, the high costs associated with the hunt makes the lion far more important to wildlife department operating budgets and community revenues than the number of lions taken each year would suggest. And because lion hunts often conclude without harvesting an animal, the ratio of lions actually taken to the amount of conservation revenue the hunts generate is significant. Minimum day requirements and high daily rates and trophy fees infuse significant economic benefits to habitat, indigenous communities, and importantly, the lion itself. Tourist hunting creates economic value, ergo, the financial incentive for Africans to preserve the lion. The benefits of sustainable-use sport hunting for lion conservation cannot be overstated. Yet hunting is a part of the problem.

When properly managed, tourist hunting provides important benefits to conservation. However, some current lion hunting practices are detrimental to the species.

Lion populations are adversely affected by the excessive removal of pride males, which accelerates the rate of infanticide, an occurrence in which a new pride male kills pre-existing lion cubs to stimulate the breeding response in the females. To avoid this circumstance, a "six-year rule" is being implemented in Tanzania and Zambia (though most of Zambia is temporarily closed to hunting) to eliminate the occurrence of infanticide by limiting the harvest to males that are six years and older. By age six, most males have been deposed from the pride and are no longer breeding, thus no cubs are endangered by the older male's harvest. And while taking only older males benefits lion conservation, changes in governmental policy such as setting population-appropriate quotas based on accurate game surveys, elimination of "pre-paid" or fixed quotas which lead to overutilization, and eliminating the harvest of females will all have a positive impact on lion populations when implemented continent-wide.

The anti-hunters' attempt to use the USFWS to circumvent sound science, the Convention on International Trade in Endangered Species treaty (CITIES), and the sovereignty of foreign governments is reprehensible, but not surprising. Listing the lion as an endangered species will, like the cheetah, begin the long downward spiral of another big cat towards the abyss of extinction. Without the significant revenues infused by tourist hunters into wildlife departments, research, and on-the-ground conservation, the lion will be reduced to token populations in national parks, and as display animals in zoos and circuses. The lion in the wild will be gone. Relegated to nuisance status, the king of the beasts will be exterminated by poachers and subsistence cattlemen eking out a living in the hard African bush-all because of an administrative ruling in Washington, D.C.

Hunters are the most important source of revenue for conservation worldwide. Considering the lack of funds available to manage and protect African wilderness, it is beyond my level of comprehension to understand why anti-hunters would so willingly dismiss the critical infusion of dollars provided by hunters for conservation. At first glance, it would appear both hunters and anti-hunters have the same goal: to save the African lion. But upon further examination, the difference becomes clear: Hunters strive to conserve the lion and are willing to pay for its preservation; the goal of the anti-hunters is to stop hunting, consequences to the lion be damned.

Why Lions Matter to You

As stated before, most of us will never hunt lions. Neither will all of us hunt doves in Iowa, or bears in New Jersey or Nevada, or coyotes in New Mexico. And though we may never pursue these species in their various locations, they represent areas in which the radical, litigious, anti-hunting lobby is currently attacking our privilege to hunt. Under the guise of "protecting" animals, these extremists' primary agenda is to regulate hunting and hunters into oblivion. Most groups are smart, well-funded, and patient, quite willing to win a small victory here and there until, eventually, the sport of hunting dies a death of 1,000 cuts.

We are in a fight to maintain the rights and heritage our ancestors viewed as self-evident, and divide and conquer is the enemy's strategy. Be it lion and elephant or deer and turkey, hunters must stand united against our foe. In this fight to preserve our sporting heritage, an attack on one is an attack upon us all.

Steve Scott is the host of America's first all-African television series, Safari Hunter's Journal, which airs on Sportsman Channel.
Last edited by a moderator: Dec 1, 2016
You must log in or register to reply here.

Hunters Can Save Lions & Lion Hunting

The Pocket Guide To Aging Lions

The Importance of Wild Lions