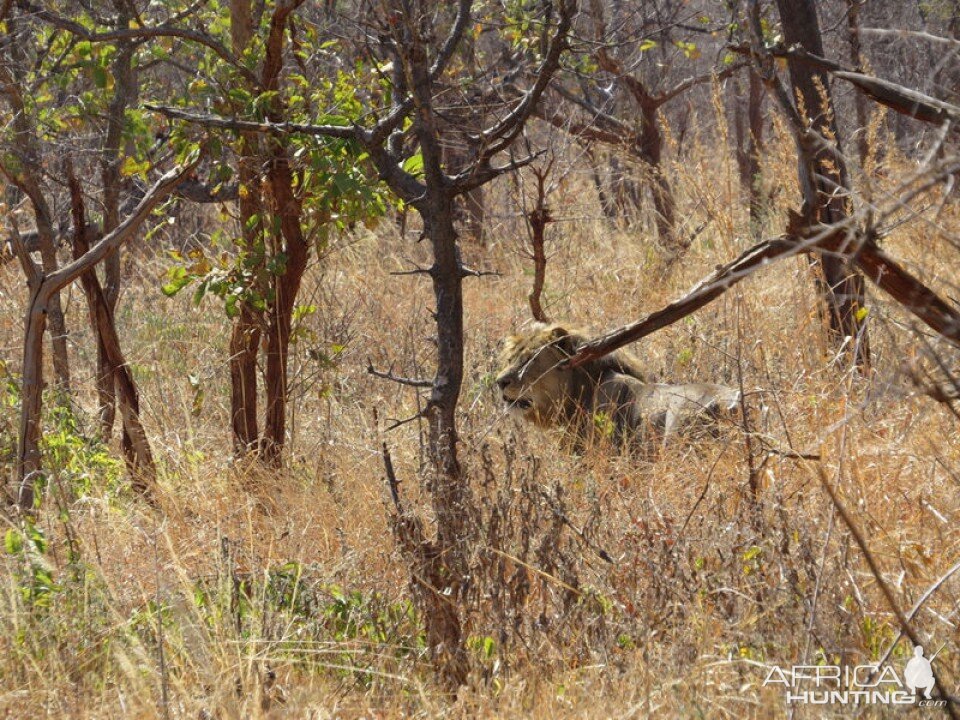 Experts agree on the primary threats to African lion: loss of suitable habitat, loss of prey base, and conflict with humans and livestock.1 The threats overlap and are interrelated. They are exacerbated by growing and expanding human populations. 2 Tourist safari hunting3 protects and secures the largest share of lion and prey habitat, underwrites most poaching control, incentivizes rural community tolerance of wildlife and supports rural livelihoods, and largely funds management authority operating budgets throughout Southern Africa and parts of East Africa. The benefits4 of tourist safari hunting mitigate the primary threats to lion and enhance their survival. The benefits account for the survival of the majority of African lion as well as growing populations. Safari hunting is essential to combat the loss of lion habitat and maintaining lion strongholds, particularly outside national parks.

Habitat loss is the “most powerful” threat impacting lion.5 Safari hunting areas overwhelmingly account for the most lion habitat across their strongholds in Southern and Eastern Africa. Leading lion ecologists agree “[t]he most important benefit from an African conservation perspective is that trophy hunting maintains vast areas of land for wildlife, which is invaluable in an ever more human-dominated world.”6 Most lion owe their existence to countries that rely on safari hunting as a conservation tool, with Tanzania representing the world’s largest lion population and Mozambique, Namibia, South Africa, and Zimbabwe assessed as having “increasing” lion populations by the IUCN Red List. 7 In short, most lion would have no habitat were it not for safari hunting, thus they would cease to exist. 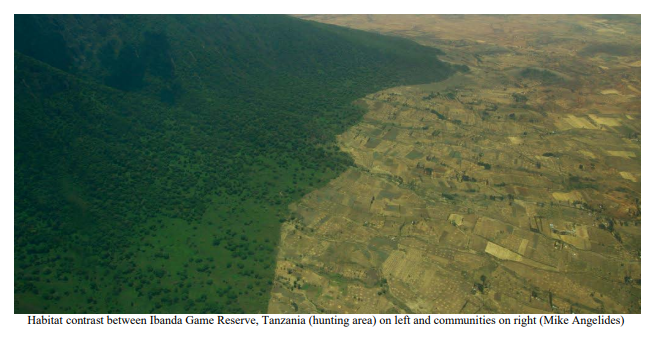 Safari hunting benefits the lion through financial support for anti-poaching, putting “boots on the ground,” and as discussed in the next section, reducing rural communities’ reliance on bush meat poaching.12 Hunting operators occupy their areas, pay hunting area lease, game, and other fees that government wildlife management authorities use to conduct anti-poaching patrols and purchase necessary equipment. 13 Government management authorities typically direct most of their budget to ranger staff costs, and rely on these hunting fees to pay salaries and equip rangers. For example:

• Zimbabwe: The Zimbabwe Parks and Wildlife Management Authority (ZPWMA) directs almost 80% of its budget to staff costs and more to equipment and training.15

• Mozambique: According to Mozambique’s National Administration of Conservation Areas, “Sport Hunting Revenues are used essentially to improve law enforcement in protected areas, hunting blocks and community programs such as Tchuma and Chipanje Chetu.” From 2013-2015, this administration spent MTM 126,581,000 on poaching control.16

• Namibia: Hunting fees (hunting area and game) are deposited in the Game Products Trust Fund (GPTF), a statutory fund used to support conservation and rural community livelihood efforts in Namibia. From September 2012 to March 2015, the GPTF has spent N$ 27,915,463.80 on poaching control activities.17​
Further, hunting operators employ their own anti-poaching patrols to cover their hunting areas, reducing the government’s patrol burden.18 Operator expenses and contributions for their anti-poaching teams include: paying salaries for scouts and rewards for anti-poaching achievements; supplying rations and fuel for field patrols; providing equipment such as automobiles, boats, all-terrain vehicles, GPS, tents, an uniforms; and otherwise underwriting and coordinating financial and logistical support for on-the-ground anti-poaching units, as specified below. The poaching control contributions detailed below describe only a sample of overall contributions by hunting operators. Their actual contributions are significantly higher. 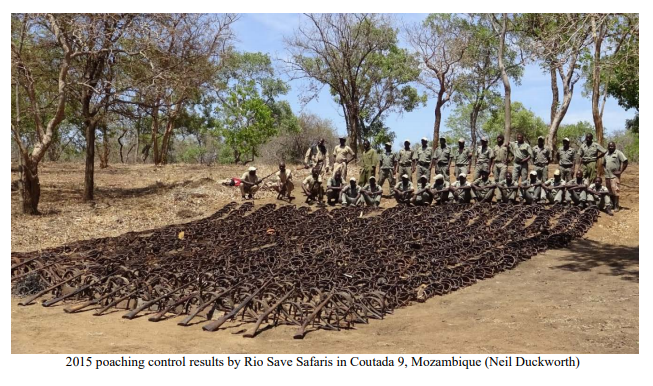 Rural communities bear the burden of living with dangerous and destructive wildlife, which kill or injure family members and destroy their crops and livestock. Rural people must be provided financial, infrastructure, and other incentives. Communities may choose to exploit wildlife and habitat illegally through commercial bush meat poaching or logging if they are unable to legally benefit from wildlife. They retaliate more against dangerous wildlife, like lion, if they do not benefit from the species. 24 Government-sponsored community-based natural resource management25 (CBNRM) programs and voluntary hunting operator contributions provide cash, game meat, infrastructure improvement, and other benefits to rural communities to incentivize tolerance and anti-poaching. The community programs below are examples of these CBNRM and operator contributions:

• Tanzania: Tanzania’s Wildlife Management Area (WMA) program has increased the amount of protected habitat available for lion and other species by incentivizing conservation over other land uses. There are currently 21 WMAs and another 17 being gazetted. Approximately 500,000 households participate in WMAs and receive a share of block fees, game fees, conservation fees, and other fees. $1,337,717 in revenue was generated by safari hunting in WMAs from 2011 to 2014.26 From 2013 to 2015, a sample of hunting operators spent over $3.125 million on community programs. This included over $250,000 for health care, $337,000 for education, $231,000 in cash from game fees, and $24,000 to build six local government offices.27

• Zimbabwe: Under CAMPFIRE, approximately 800,000 households–25% of Zimbabwe’s population–receive direct or indirect benefits. Over 90% of the revenue comes from safari hunting. Between 1994 and 2012, $21.5 million has been allocated to CAMPFIRE communities. From 2010-2015, CAMPFIRE wards utilized almost $3 million for assistance to wildlife victims, food security, direct cash benefits, and social services (rehabilitating and building classrooms, school, and clinics). An estimated 550,000 kg of hunted game meat was also distributed to CAMPFIRE communities during this period. Because of these incentives, poaching and problem animal control in CAMPFIRE areas is relatively low.28 In the 2013 to 2015 period, Charlton McCallum Safaris paid over $1.05 million into the CAMPFIRE program of which over $470,000 accrued directly into ward accounts. These funds were used to construct schools, classrooms, nurses’ houses, toilet facilities and other livelihood benefits.29

• Mozambique: In Mozambique, ~20% of hunting fees are distributed to the local communities. The decree requires communities to formally register with the Ministry and outlines the process of revenue collection and distribution through dedicated bank accounts. There are presently 45 registered communities under this program. Moreover, programs such as the Tchuma Tchato provide a higher revenue share with rural communities.32 A sample of 13 hunting Mozambican hunting operators invested $830,000 in community projects from 2013 to 2015. For example, one operator constructed 43 homes and drilled 13 boreholes to improve the livelihoods of surrounding communities.33

• Namibia: The community conservancy system provides over 165,182km2 in habitat and benefits over 195,000 people. Most conservancies depend on safari hunting to fund their operations and to incentivize participation through distribution of game meat. The conservancy system has benefited the lion, elephant, black rhino, and many other species by extending available habitat, and benefits rural Namibians by generating N$ 111 million in returns to communities and provided 5,147 jobs. The GPTF has made over N$ 11 million in grants for programs aimed at mitigating human-wildlife conflict.34 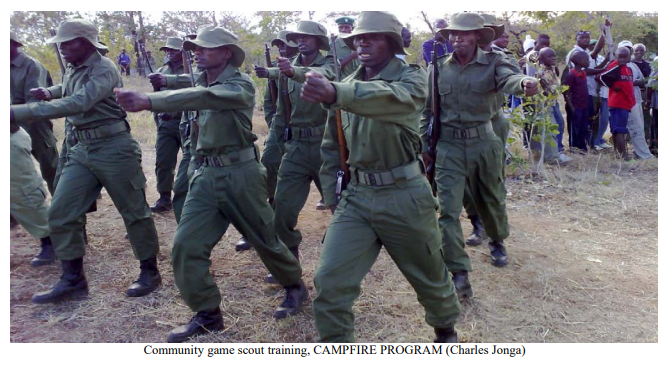 ​
• Tanzania: Through 2016, over 74% of the revenue generated to TWPF is comprised of 25% of the total proceeds of harvested game in Game Reserves and Open Areas. TWPF is a principal funding source for governmental rural community support and anti-poaching in Tanzania’s protected areas.36

• Zambia: The Zambian government suspended hunting from 2013 to 2014 (for most species) and 2013 to 2015 (lion and leopard). That caused a significant decrease in revenue generated from safari hunting. Prior to the suspension, safari revenue accounted for 32% of the management authority’s annual revenue.

• Namibia: The exact revenue generated by safari hunting for the GPTF is unknown, however the fund is comprised of revenue collected from the sales wildlife and wildlife products on State lands.40

​
Hundreds of hunting based conservation organizations and foundations have long provided tens of millions of dollars for lion conservation. Examples include the following:

​
• Conservation Force: For the past decade, Conservation Force (IUCN member) has spent up to $200,000 annually towards regional, national and local lion action plans, population status surveying from Kruger National Park to Benin Complex, lion aging, a plethora of research and publications such as Conservation of the African Lion: Contribution to a Status Survey. 41

Safari hunting is the foremost force against the extirpation of lion. Most lion depend on habitat designated as hunting areas and protected by the occupancy of safari hunting operators and revenue. Lion prey also depend on that habitat and stewardship. Further, safari hunting incentivizes greater tolerance of lion by rural communities and reduces poaching through the distribution of tangible community benefits. Lion populations are healthiest in the countries where hunted. As long as there is safari hunting, there will be lion, but in the absence of safari hunting most lion will be lost to the three primary threats. Lion need tourist safari hunting as much as safari hunters need lion.