Hey guys I was talking t my wife the other day and she wants a new hunting rifle but doesn't like bolt action rifles. Which brought up the question of can she use a lever action for hunting in Africa? I know that Marlin makes rifle capable of bringing down moose but I haven't seen and photos of guys with lever actions on here. So any info would be welcome.
We’re not like you. We’re the Savages. We’re the violent exiles, the lone-wolf nomads that you bred out of the race back when growing crops and living in one place became so popular. We don’t have, and we don’t need a social context.

You just need to look a little harder that's all! I and a couple of others have used lever guns in Africa. Last time out I used a newer Winchester 95 in .405 Winchester. There aren't many but a few of us have.

You can always check out the Browning BLR's. You can get them from a .22-250 up to a .308 Win and a lot of calibers in between. They are not the traditional leaver action since they use a clip feed magazine.
If you don't care where you are, you are not lost. 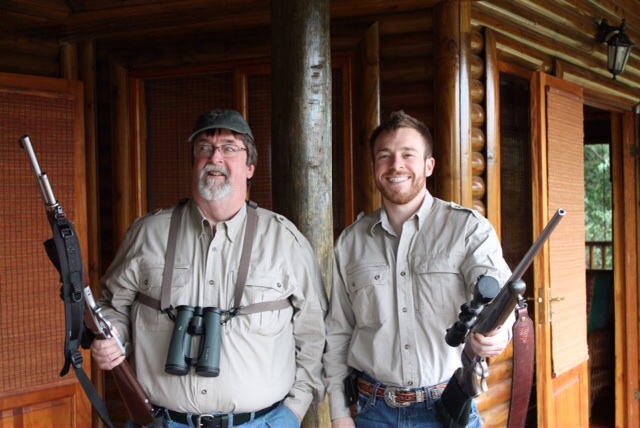 My PH, off to my right, had just come around the corner to say let's go hunting! My wife snapped the photo with he holding my Marlin 1895 stainless 45-70 government lever action. It pushes a 325 grain bullet at 1800 feet per second. Great brush gun for most critters. (MOST)
Now before anyone Chimes in about why anyone would want to take such a pitiful useless gun to Africa.......I did and it did fine! No I will not try to shoot an elephant with it but I'm confident with it on most other critters!
Note my son is holding a Ruger Model #1 in 300 win mag. It is a falling block single shot rifle that has a lever to open the chamber.

I could not recommend it high enough if you do not want a bolt action.

CT Safari's usually has a lever action hunt. Nothing wrong with a level action.

I started out deer hunting with my Grandfather's model 1894 in 32 Winchester Special. I love lever actions.

Depends on what game she wants to hunt and what caliber. A 45-70 is a fine choice with buffalo bore and grizzly cartridge brand ammo. Very hot ammo and penetrates deep. If you reload and money isn't an option I would say a marlin 1895 and have it rechambered to .50 Alaskan or even better .510 Kodiak express. The .510 will give you 5400 foot pounds in a lever gun. More than enough to drop anything that walks. With proper shot placement of course.

458caliber said:
If you reload and money isn't an option I would say a marlin 1895 and have it rechambered to .50 Alaskan or even better .510 Kodiak express. The .510 will give you 5400 foot pounds in a lever gun. More than enough to drop anything that walks. With proper shot placement of course.
Click to expand...

never heard of the 510 Kodiak express so I looked it up and if the various articles I read on it are true then that's truly an impressive cartridge! some claimed a 550gr bullet at 1900fps which would (in my opinion) be plenty suitable for any DG (with the proper bullet). it meets the usual requirements of a .300+ SD and 4000+ ft/lb of muzzle energy. I wonder if you could get a 570gr Woodleigh FMJ up to 1850fps?

-matt
"A buffalo could probably be taken with a well placed frozen herring but, the question is: "What's the point"?" -Velo Dog
4

matt85 said:
never heard of the 510 Kodiak express so I looked it up and if the various articles I read on it are true then that's truly an impressive cartridge! some claimed a 550gr bullet at 1900fps which would (in my opinion) be plenty suitable for any DG (with the proper bullet). it meets the usual requirements of a .300+ SD and 4000+ ft/lb of muzzle energy. I wonder if you could get a 570gr Woodleigh FMJ up to 1850fps?

I think it's very possible. It can be loaded up to 700 grain thumpers. Penetration would be there with the 700 grain but energy would be lacking. A 570 I think would be at 1850 or nipping at the heels!
B

We used a Browning Lever Rifle in 7/08 in Namibia in 2000. I am looking at our Gemsbok now. Must have worked fine.
Another rifle I have that would be fun would be my Remington Pump in 35 Whelen. I grew up on a Rem. 870 Pump 16 ga. so shucking a forearm is not strange to me.

Tony Maoris (sp?) used a 475 Turnbull on an episode of Under Wild Skies on 3 buffalo in a matter of minutes- http://www.turnbullmfg.com/gun/under-wild-skies-model-1886-td/

It was efficient and deadly.

i could see the 475 Turnbull as being a good choice as well. that is as long as your able to get at least 1900fps with a 500gr bullet. (they claim its possible with a 26" barrel) 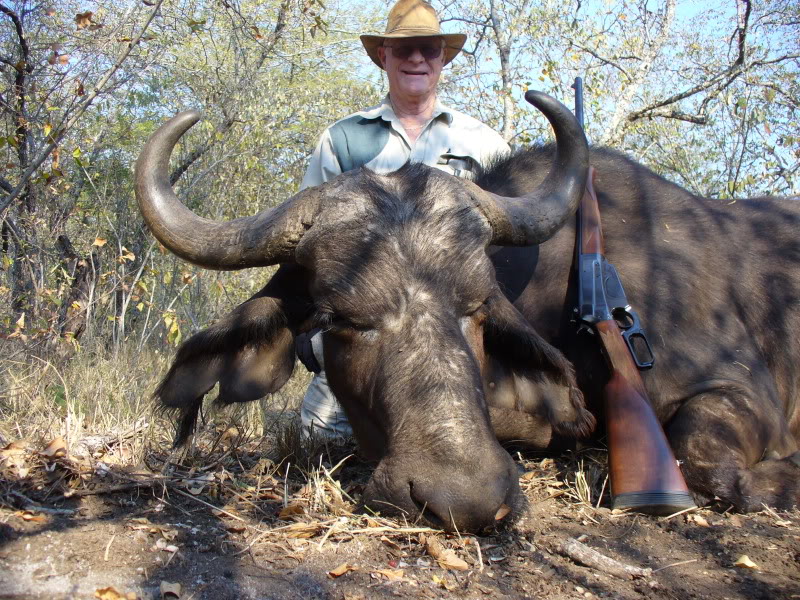 im curious what load was used in the 45-90 to take the elephant? looks like it wasnt a head shot, but it can be hard to tell sometimes.

-matt
"A buffalo could probably be taken with a well placed frozen herring but, the question is: "What's the point"?" -Velo Dog
L

Matt,
A friend had borrowed my 45-90 for bullet testing of a variety of bullets and loads and he first shot the ele at a bout 20 yards with a frontal brain shot with 450 grain FMJ flat point Kodiak at 2150 fps; the FMJ actually made a perfect mushroom without breaking the jacket, but barely entered the brain. The ele went right down, but needed a finishing shot, so his next round was a 450 grain NF FPS at 2000 fps + and that shot all the way through the head and out the back, terminating the ele. Then, to test a Belt Mountain 430 grain brass bullet at 2050fps, the frontal brain shot went through the head and into the body.
The NF and Belt Mountain bullets were unscathed and could have been reloaded and used again.
The Kodiak proved to be excellent on cape buffalo, but not tough enough for ele frontal brain shots.

LCQ,
The crescent steel butt plate did bother me some when I first bought the rifle, but after I learned to tuck the lower butt tip into my arm pit, it has not bruised me since. The only thing I do not like about the crescent butt plate is that is not as easy to stand up on the butt as a rifle with a shotgun style butt with a rubber recoil pad like my 1895 .405 WCF.
CRS, NRA Patron Member, DRSS, DWWC, TSRA, Whittington Center,
Android Ballistics App athttp://www.xplat.net/

Just returned from my third safari in South Africa. Each trip I have brought my 1895 Winchester .405 Deluxe (mfg. 1912) and it has dropped a Kudu, a gemsbok and, this time, a nice old nyala bull. Shot the nyala at 80 yds and it went 20 yds. Dead when we got to it. Gemsbok and kudu never took another step. This old heirloom has become my favorite rifle and I have a few sweeties. Roche Du Preez, my PH at Roche Safaris, loves working hard to get us close enough to use to hit them hard with it. 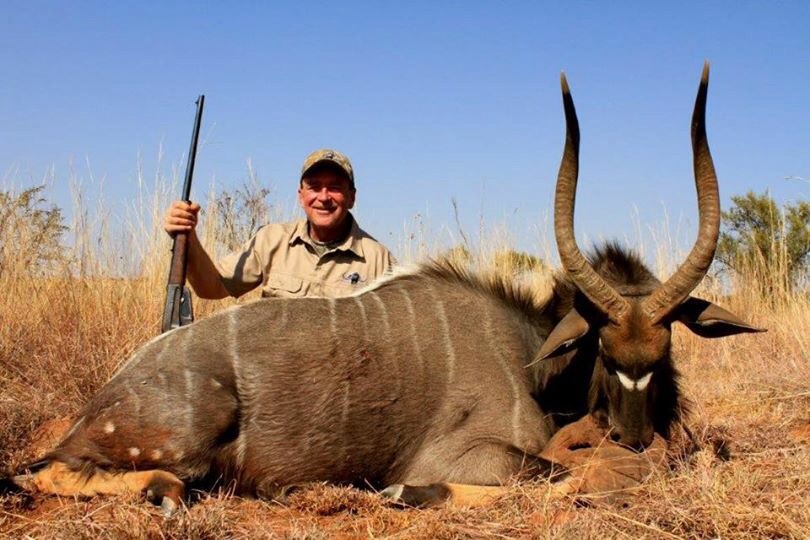 How possible would a double lever rifle be?

L
How can I get parts for my Uberti 357 lever action gun into or in South Africa?