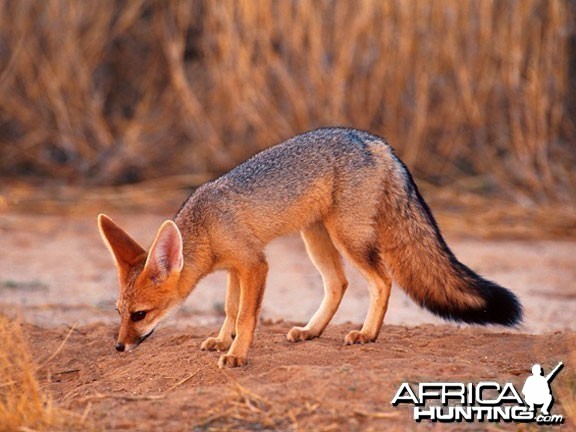 No matter how hard we tried, Diane and I could see no eyes. We began to think that Roy and the trackers had gone totally mad.

Once the African bug has bitten, that's it - it's in your blood. One victim of AAS (African Addiction Syndrome) is Australian -born, Diane Malek, a big-game hunting, fishing, and white-water rafting adventuress from Down Under. On her latest visit to South Africa, her unusual quest was to take a wide variety of nocturnal creatures.

It was early morning in mid-May, almost winter, when Diane and I arrived at Roy Wormald's camp and game reserve, Chikwero, twenty-two miles east of Cradock in the Eastern Cape. Roy and his wife Jenny run an operation with a wide assortment of plains game and some small indigenous predators available.

The first night of hunting would begin just after dark. Diane's list of desired game included the African lynx (caracal), two indigenous fox species, genet cat, and porcupine. Finding this unusual assortment of uncommon game would be a major task requiring a large amount of luck, plus a skilled and knowledgeable guide, a position well filled by Roy.

As the last traces of a spectacular, orange fireball melted below the western horizon leaving a dim, grey veil over the African veld, a changing world began to enfold. This was the magical moment when creatures of the night began to prowl. After changing into thick, warm clothes we climbed onto a back seat of the open Toyota Land Cruiser, with a mounted gun rack, with a .243 rifle and a 12-gauge shotgun within convenient reach against the rear of the cab. Just behind us were two Xhosa-speaking trackers, Deneese and Chaku, each with a hand-held spotlight. The headlights from our vehicle cut a swath along the deserted dirt roads, occasionally illuminating a springhare hopping alongside the road, while the spotlights exposed a startled grey duiker or grazing impala. We hadn't gone more than two miles when Chaka's light picked up a pair of foxes searching for edible insects along a nearly dry riverbed. Deneese continued to identify the numerous eyes that stared at our light as we passed by - springbok, impala and some female kudu.

Then, just as we rounded the bend in the road and the spotlight swept past a clump of acacia thorn trees, a single pair of eyes caught our trackers attention. Ingwe yeziduli - African wildcat! Roy quickly stopped before the curious feline could look away from the piercing light beam; I produced my Johnny Stewart varmit call - just the solution for keeping a hungry predator looking in our direction.

Momentarily, the eyes vanished from view, but as I began blowing a frantic rabbit distress call, those curious eyes came back into sight only a few feet from where we had seen them. Diane swung into action. A loud report of the 12-gauge broke the stillness of the night and the two eyes disappeared from view. Assuring Diane that she had made a good shot, Deneese and Roy led her across the field while I held the spotlight fixed on the area where we had last seen the eyes. Within a matter of minutes the victorious trio returned with Diane's first night critter, a large, male African wildcat. Our team effort proved to be the perfect formula for success. By 10.00 p.m. when we returned in time for a late supper, Diane had collected an African wildcat, a springhare, a Cape fox - an encouraging start for the first night of hunting. 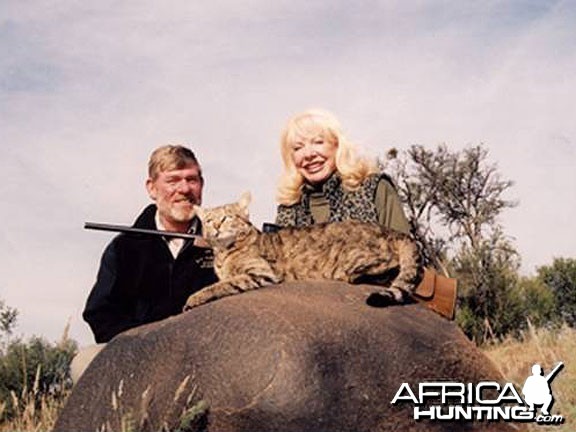 Outfitter and PH Roy Wormald, and huntress Diane Malek, with an African wild cat taken at night with the use of a varmint call.

The following morning, a strong northerly wind brought near freezing temperatures. Throughout the day conditions worsened, and by early evening an icy rain fell. We spent the night around the cosy fireplace in Roy and Jenny's living room drinking South African Cabernet.

A break in the weather wasn’t predicted for another two days, so the following afternoon, between rain and showers, Diane harvested a nice springbok on a hillside not far from the main ranch house. With hunting clients fully booked for the season, Roy found it necessary to keep his freezer fully stocked with fresh game, and springbok was high on the list.

Time was running out, and bad weather had become an unexpected factor. With only one night left, and two days set aside for a caracal hunt with hounds in a different area, Diane's chance of success was fading fast The next evening was the last of the night hunting, and fortunately the weather cooperated. We left the ranch house at dusk and by 7.00 p.m. we were in the area that Roy felt would be most productive.

Sticking to our proven game plan, we scanned the fields and stood at the ready with predator call and shotgun. Diane missed a shot at a genet cat, and caught a fleeting glimpse of an aardwolf, all within a two-hour period. It appeared that after two nights of immobility due to the wind, everything was now on the prowl.

Suddenly Deneese began shouting something in Xhosa. Roy immediately stopped, and joined us on the top. Diane and I frantically stared at the end of the spotlight beam but were unable to see any reflected eyes. We couldn't understand Roy's and Deneese's reaction as they spoke excitedly to each other in Xhosa. Diane and I still could see no eyes, and began to think that Roy and his tracker had gone totally mad. Then our PH said, "It's a porcupine. They only come out at night and never look into the light. You're just bloody lucky to run across one because you'll never see their eyes. Quick, Diane use the rifle, he's too far out of range for the shotgun.

Diane pulled the .243 from the rear rack, flipped off the safety, and searched for the animal in her scope. With eight power magnification and a light-gathering scope, she was able to locate her target, and quickly squeezed off a shot. Her bench rest practice with that weapon on the day of our arrival had paid off. She cleanly dispatched the large male porcupine with a single shot at 150 yards, a great climax to an eventful evening. 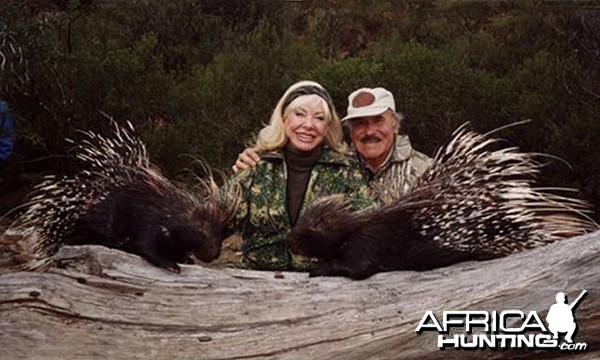 Diane Malek and author, Bob Markworth, with a pair of African porcupines.

We left Roy’s ranch before daybreak to drive to Grahamstown, to meet up with Jeff Ford, the professional predator hunter and dog owner, early enough for the dogs to strike a caracal track before the midday sun evaporated the scent. Our timing couldn’t have been better. His hounds, all 14 of them were anxiously awaiting their release from their cages on the back of his pickup. 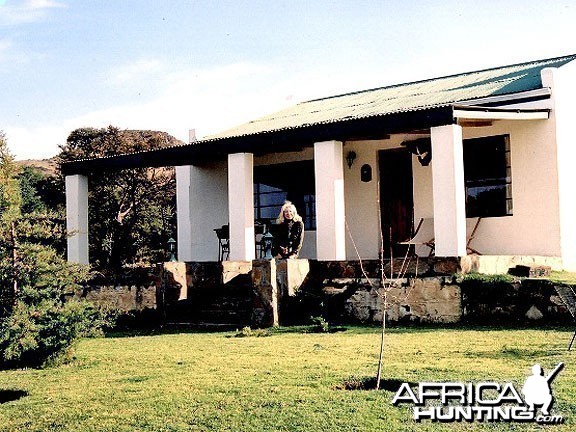 In order to work on her collection of Africa's smallest game animals, Australian-born huntress Diane Malek and her companion, Bob Markworth, stayed in this comfortable guest lodge located near Cradock, South Africa.

Jeff had quite an assortment of hounds, mostly Blueticks and Walkers, with a single greyhound named Baby. Speed was her forte and, as Jeff explained, she would often out-distance the hounds once they were on the track, and put the caracal up a tree before the fleeing animal had a chance to out-manoeuvre the other dogs.

We watched as Jeff released a single dog named Potsooi from the back of the pickup, and sent her off down a dirt road that transversed the property. He followed behind in his vehicle as the strike dog scurried along, criss-crossing both sides of the road, attempting to pick up a track. We trailed behind Jeff in our own vehicle, allowing enough distance to avoid the dust from the parched road that had obviously escaped the northern storm. An occasional yelp of excitement arose from one of the hounds in the back of Jeff's truck, but Potsooi remained silent, nose to the ground, intent on picking up a track.

We hadn't gone more than two or three miles before Jeff's strike dog found a track that sent her baying loudly off through the brush to our left and down into a wide ravine. Once Jeff was assured that the track was fresh, he released the other frantic hounds, and the race was on. It was music to Diane's ears listening to the chorus of fourteen excited canines chasing the top predator of the area, an elusive African lynx.

Diane, Roy and I left our vehicle and followed Jeff into the ravine, not far behind the baying hounds. The terrain was undulating bushveld with a little more brush and a few more trees that we had seen further north. From previous experience of hunting cougar, bobcat and coon in the States, Diane and I knew from the hounds’ bellowing that they were in hot pursuit, perhaps even within sight of the fleeing quarry.

As we descended further into the ravine, the entangling brush became higher and thicker, slowing our progress. Then about a hundred and fifty yards ahead, a varying array of barking could be heard. The pitch of the baying hounds had changed to a slower bellowing sound, intertwined with short, steady barks, a canine chorus that Diane and I knew only too well - the dogs were barking "treed". 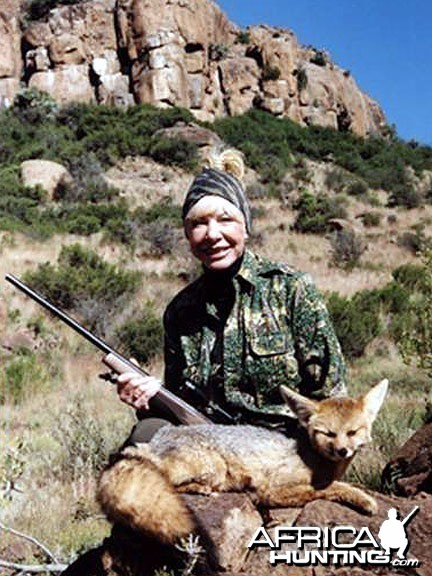 This curious Cape fox fell victim to a varmint call used by the author, Bob Markworth, and a well-placed shot by Diane Malek.

It took us nearly fifteen minutes to fight our way through the tangled, scratching brush before we caught up with the hounds grouped around the base of one of the taller trees. Two of our over-enthusiastic Blueticks had actually used some of the surrounding brush to launch themselves partly up the tree, closer to the regal rust-coloured caracal that was partially visible on one of the upper branches, thirty feet above our head. Roy handed Diane the 12-gauge and after catching her breath and manoeuvring around the tree for a clear shot, she dispatched the handsome animal from its lofty perch. You can be sure that this was a fitting conclusion for the Aussie lady and her unusual quest for the creatures of the night.
Last edited by a moderator: Dec 1, 2016
African Hunting Gazette
You must log in or register to reply here.

Leopard In My Rear View Mirror