I bought an almost new but secondhand Kimber from a shop assistant at the local gun shop (Michael). This rifle had fired 105 shots and Michael won the 500 yard competition with it. He sure knows his stuff! On Sunday I took the new beast to the rifle range at Mareeba inland from Cairns in higher country and reasonably “mountainous”. It was 4wd country only. Yikes, I didn’t think we’d ever get to the top. The range has been newly made but was completely different to what I expected.

This rifle range was nothing that I have ever experienced before. Instead of being flat, it was very much a ridge country with targets that were placed at various intervals and laser measured for distance.

I normally do not shoot at that sort of distance, but I decided to try the 5 to 20 power Nightforce scope. My target, I thought was at about 300 yards. It turned out to be right on the button at 400 meters and it was quite an experience. I enjoyed lying prone and firing at these fairly distant targets. The heat haze wasn’t bad then but I could see it was picking up.

My friend Ron, spent considerable time being coached by the Range Master and eventually he was spot on for the thousand meter target. Just go and measure out 1,000 meters and see just how far it is. The targets as far as I can remember, were out to 1860m which, believe me, is a long way when shooting. Some may be at the 2 km mark but I’m not sure on that though.

I used Browning factory ammunition that are the 168 grain Long-range Pro cartridges with the Sierra tipped the Match King bullets (See photo attached). The results of the velocities are as follows (this was using a Labradar).

Velocities are measured in feet per second. The temperature was 32 degrees C (90 degrees F).

Now it is fairly obvious that the 3rd shot had a bad primer (and the primer flash didn’t work properly) or a "dud" cartridge. Hmm!!

Now using hand loads I was given that were loaded with AR 2206H powder which emulates IMR 4895, and 168 grain Bergers, I had the following readings. The first shot didn’t record as I forgot to turn the radar on but the here are the following 4.shots. 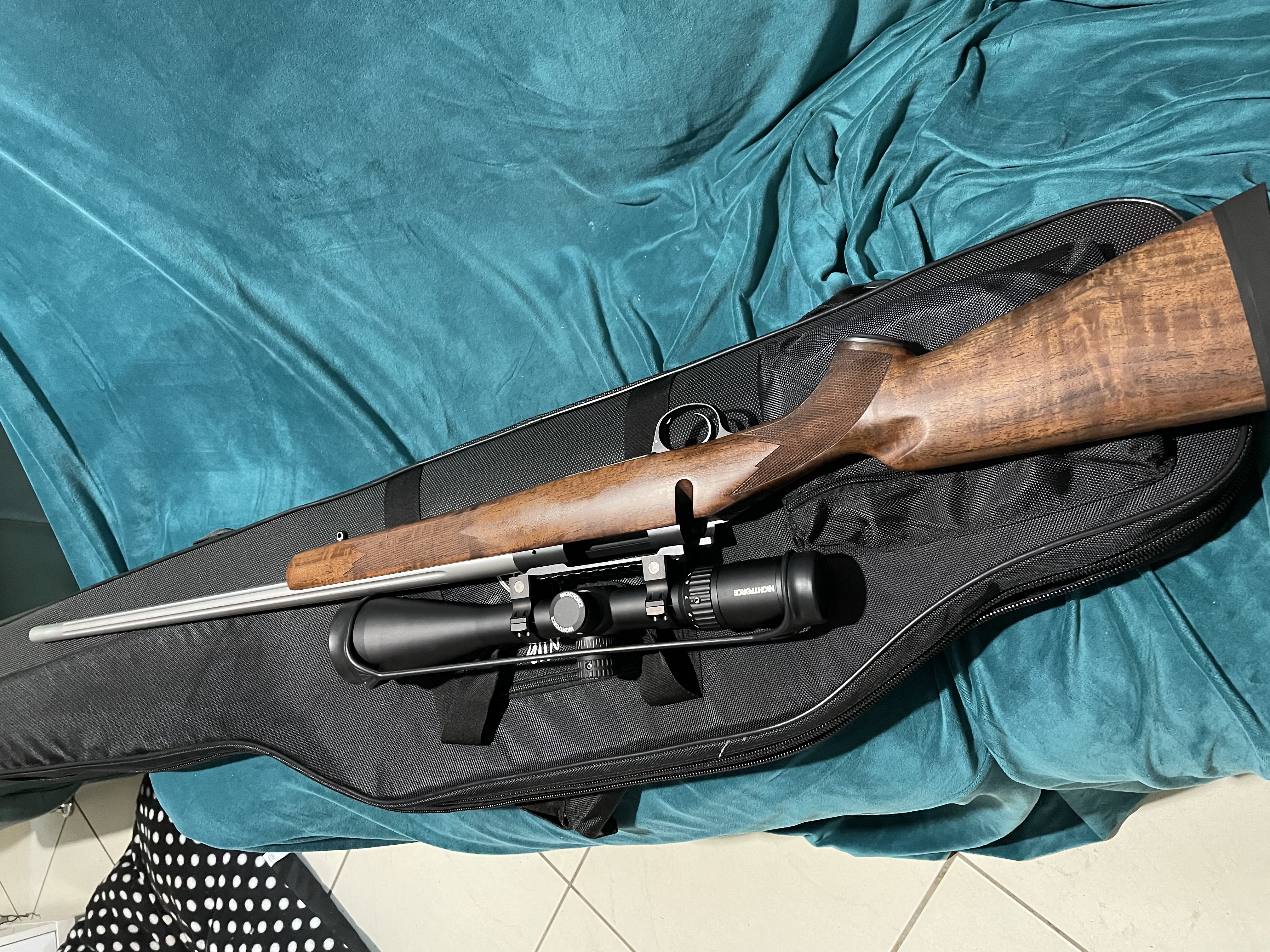 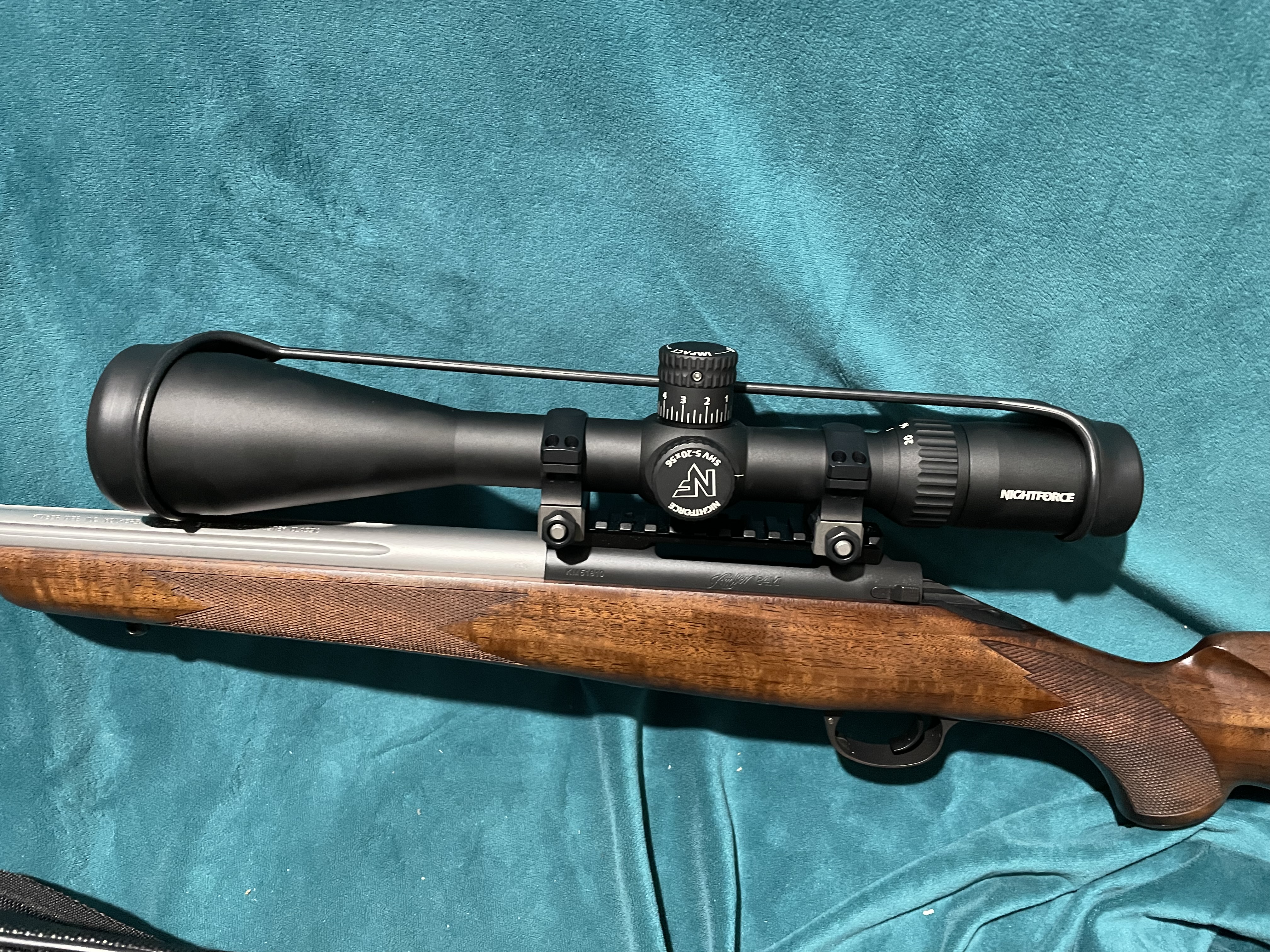 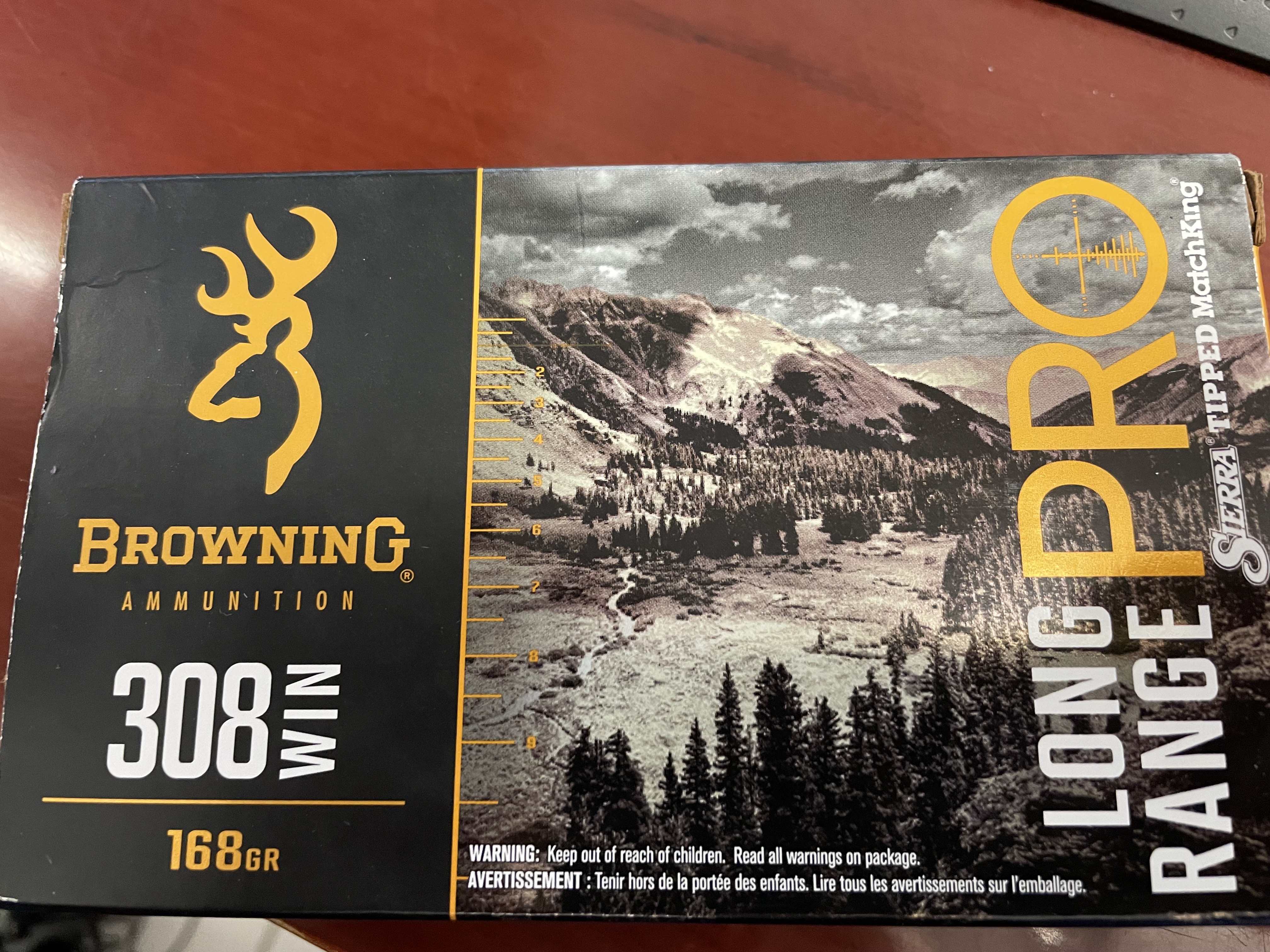 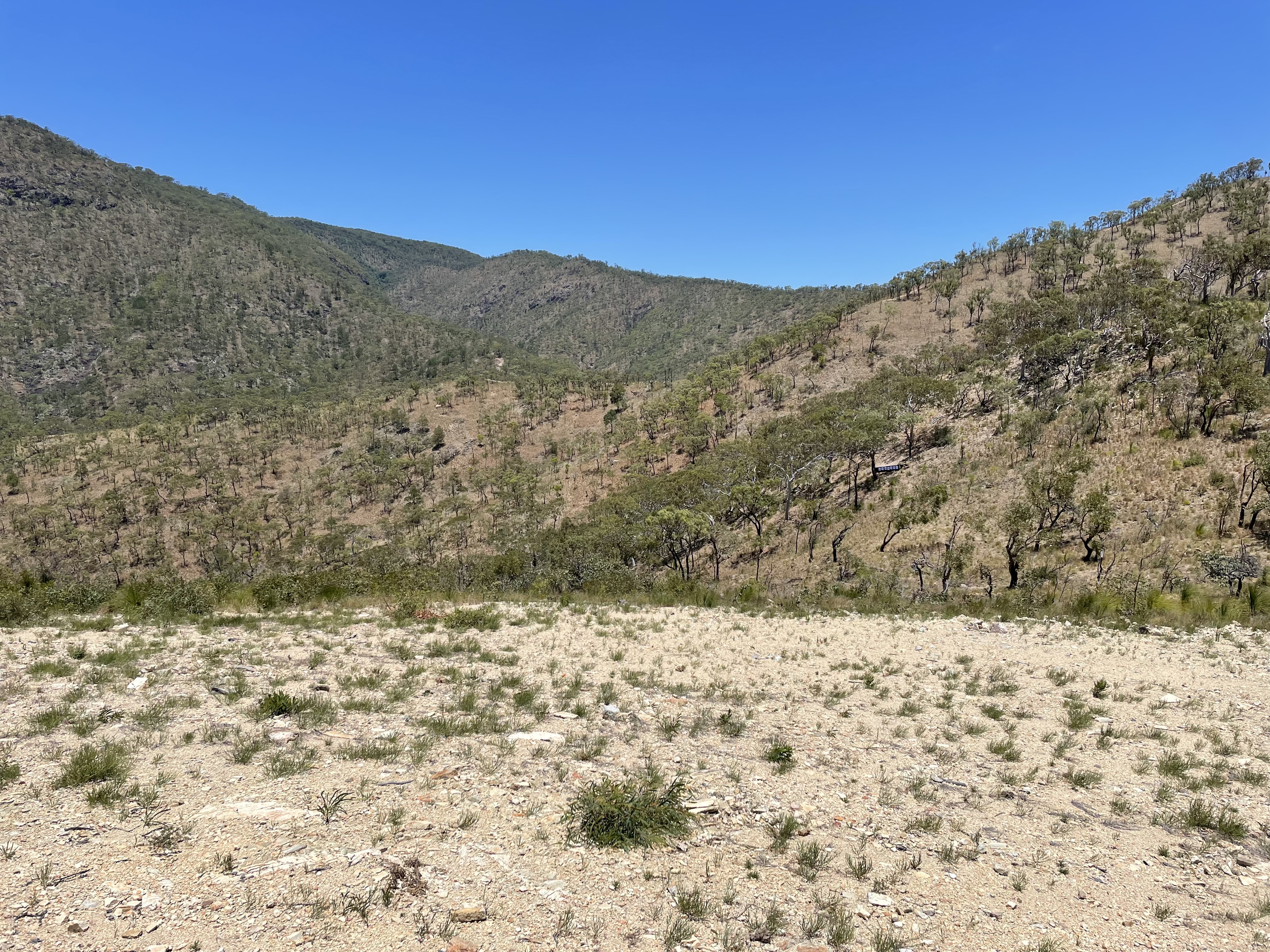 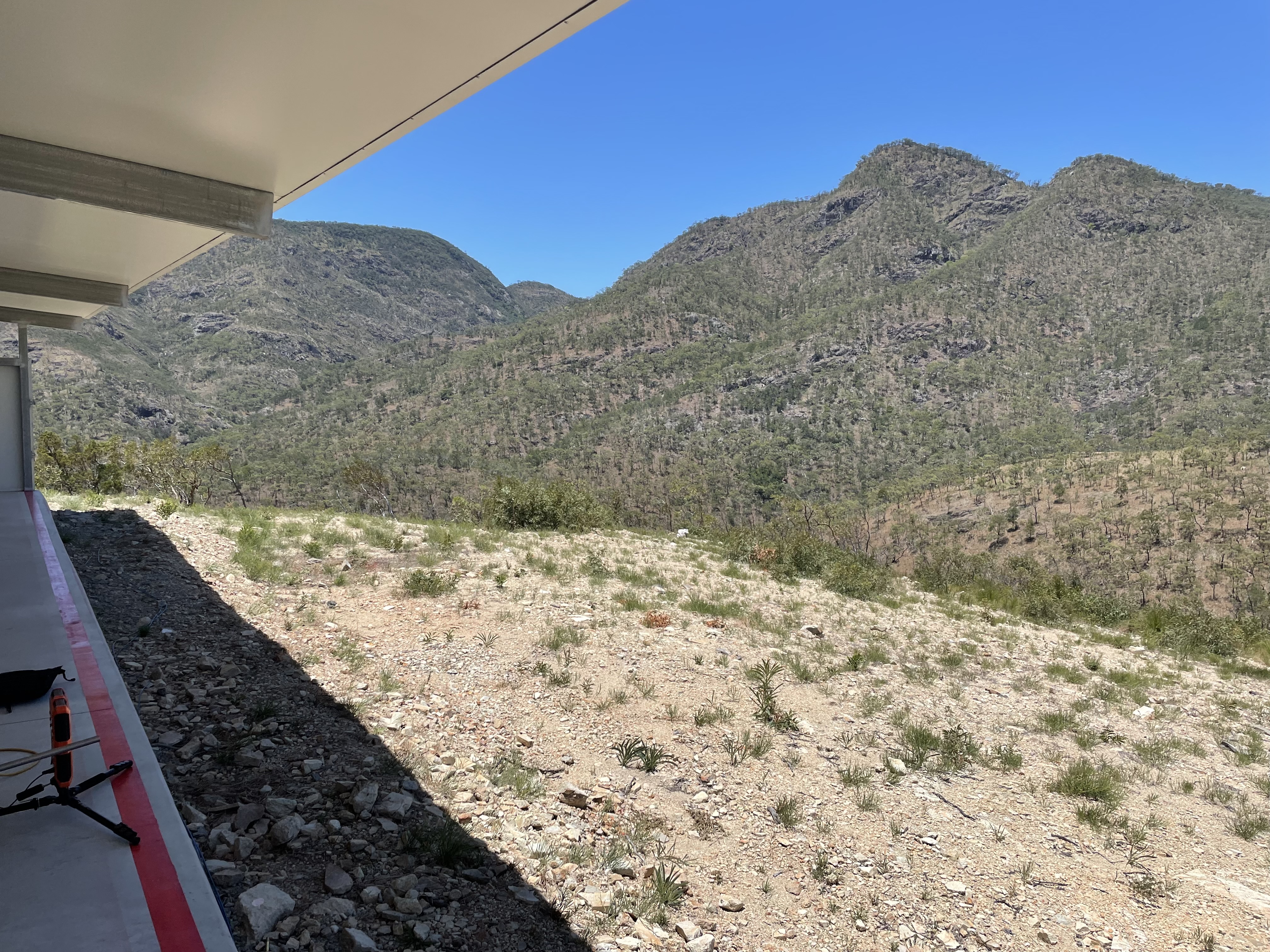 I assume you were shooting steel and not having to change targets in that rough terrain! I would be exhausted walking that country!
Your averages and mine calculate differently, ie…
handloads average 2,754 fps
Browning average 2,545 fps

I don’t think much of Browning ammo if this is typical, although I find Sierra bullets exceptionally accurate.
Last edited: Oct 25, 2021
Africa on my mind.

Ridgewalker said:
I assume you were shooting steel and not having to change targets in that rough terrain! I would be exhausted walking that country!
Your averages and mine calculate differently, ie…
handloads average 2,754 fps
Browning average 2,545 fps

I don’t think much of Browning ammo if this is typical, although I find Sierra bullets exceptionally accurate.
Click to expand...

Steel targets spotting scope. Had a spotter for each shot. I hit the target each and everytime.
D

I’ve seen few Kimbers in 308 that wouldn’t shoot above average.

I have only owned 3 Kimbers…243 Montana, 308 Classic, and 375 Talkeetna. With the right handload, they all shot under an inch at the 100 meter range, but only the first 3 rounds with the 243 and 308. The thin barrels would start to heat up and open up the groups after that.
Dr Ray, that heavy fluted barrel should really help out! That’s a very handsome rifle! My 243 is my mountain walking varminter and has taken numerous coyotes, antelope and mule deer. Even after hundreds of rounds through it using Sierra 85 grain Game Kings I can put 3 rounds into less than 5/8” at 100 meters. I consider that excellent for such a light weight rifle.
It will be interesting to see how you 308 does on targets with a proper handload.
Enjoy your new toy!
Africa on my mind.

That sounds like a great day at a very cool range! Congratulations on the rifle. Now you are a mountain hunter in training? Get jogging and lifting those weights Ray
"When my friends tell me that I have led a remarkable life, I have to admit having done my best to make it so" - John Kingsley-Heath

I must correct the average velocities

Discarding the 2154 fps n Browning average then would be 2673.67
Sorry about that I don't know how I stuffed up on the averages

Pheroze said:
That sounds like a great day at a very cool range! Congratulations on the rifle. Now you are a mountain hunter in training? Get jogging and lifting those weights Ray
Click to expand...

Let’s not overdo the training bit
Let’s say trying to be
You must log in or register to reply here.

Very happy with the ruger 9.3