Clayton said:
In all probability the factory bedding won't need any work. The forward recoil lug pretty much insures that. Don't know if your rifle has it, but Winchester was even bedding the lug on the under side of the barrel on Alaskans. A really good idea.

You may however, want to consider something I've done to all my Walnut Stocked guns, is seal the hell out of all the inleted (sp?) areas to prevent not only moisture but oil saturation into the wood. I've used three coats of a quality Polyurethane (not water based) and have rarely needed any touch up for years after. Getting one wet in a downpour is just a way of life and I've never had one change point of aim/impact from a stock warping.

Appreciate the info! I usually try and seal up wood stocks, both the outside and inside with Birchwood gun wax (just did a CZ 455fs in 22mag last night). I like your idea of the polyurethane on the inside of the stock.

IdaRam said:
Hi @375 Ruger Fan ,
I really like Model 70's, so it pains me to say this, but the barrel on my .375 is truly awful. The reason I say that is how it shoots as well as how it looks.
A little speculation to begin with: I can't swear to it, but I'm pretty sure it is a "cut rifled" barrel. I don't know that to be the case, and that is a surprise to me if true, but there you have it. If so, I imagine Winchester purchased the blank from a supplier of cut rifled barrels.
Not that this matters in the least, it's just not that common. Most majot manufacturers are using button rifled or hammer forged barrels. Cut rifling takes a lot longer to produce and consequently is more expensive, generally speaking.
Enough of the speculation. The bore is just rougher than a cob. It looks more like a washboard than a barrel. Because it is so rough, it collects copper at a very rapid rate. I have had some rough barrels before, but nothing close to this one.
In addition to that, there is a big gouge in one of the lands about 10 inches forwad of the chamber. Because of the terrible fouling and issues getting loads to shoot (more on this in a minute) I looked at the bore with a bore scope. Holy moly, I wish I hadn't done that! You can see where the tool dug into a land, carving a chunk out of it.
I have actually worked up loads with a 300 gr A-Frame and a 300 gr Solid that shoot somewhat close to same POI and group about inch and a half, so I've made it work for the short term, but it took a lot of development to get to that point.
Usually it seems point of impact changes more vertically than horizontally between different bullets and loads. This gun shifts dramatically left and right with different bullets and loads. For example, 300 gr Accubonds don't even hit paper when the rifle is zeroed for A-Frames at 100 yards. The AB's hit about 8" left and 4" higher.
The rifle has a HS Precision stock and a nice bedding job, as well as a trigger job. I bought it used off gunbroker and I'm pretty sure they guy who owned it before me had the same issues so he sold it. Can't really blame him
Anyway, I believe a new high quality barrel will make this a fantastic gun. I love everything else about it. It fits great and the action is smooth as glass. And it feeds flawlessly.
So there you have it! My Sunday morning barrel rant
Click to expand...

You should try a lapping compound or some of Tubbs final finish before you scrap a barrel/
http://www.davidtubb.com/final-finish-bullet-kits/finalfinish-bulletkit-375 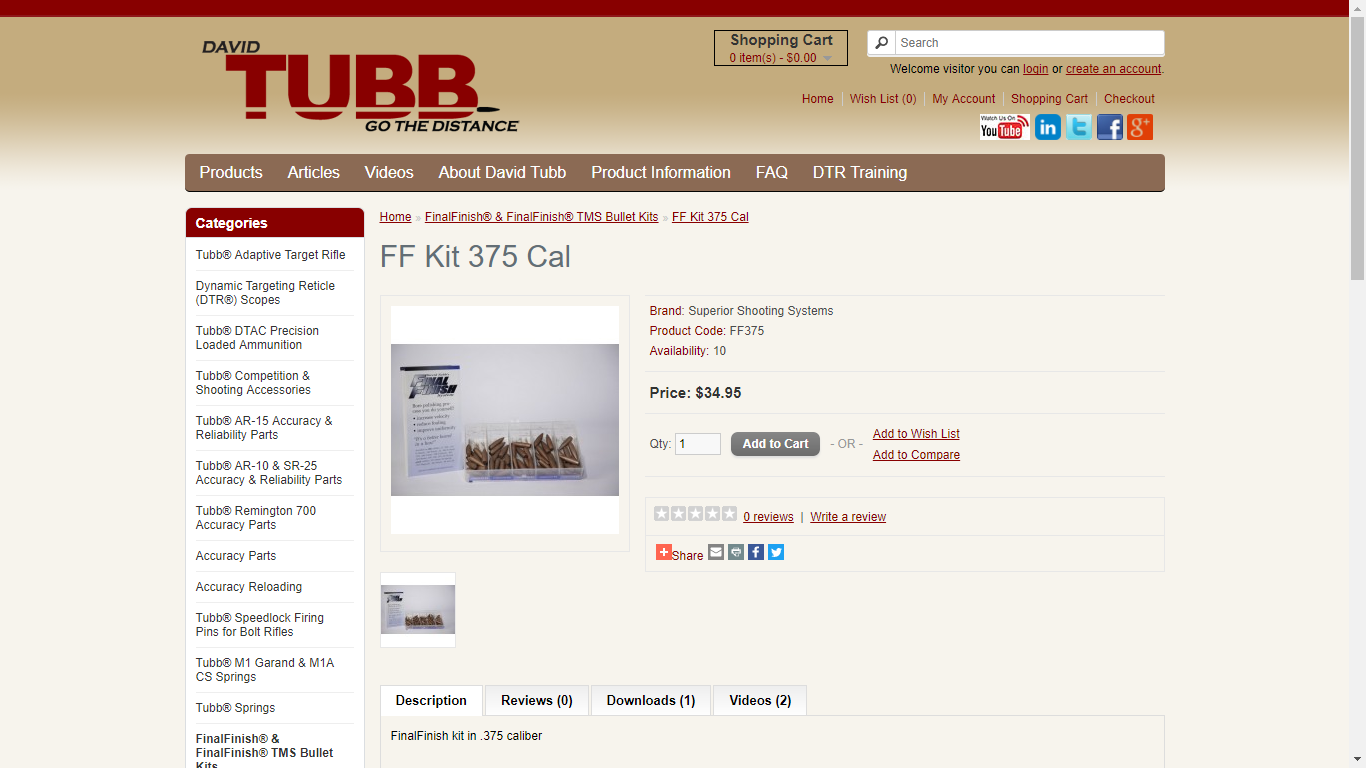 Southwind said:
You should try a lapping compound or some of Tubbs final finish before you scrap a barrel/
http://www.davidtubb.com/final-finish-bullet-kits/finalfinish-bulletkit-375
Click to expand...

Unfortunately, if the barrel is as bad as it sounds, lapping won't do the trick. There's way too much imperfection.

Southwind said:
You should try a lapping compound or some of Tubbs final finish before you scrap a barrel/
http://www.davidtubb.com/final-finish-bullet-kits/finalfinish-bulletkit-375
Click to expand...

Definitely solid advice in most cases @Southwind . Unfortunately this ones too fugly for the Tubbs to do any good. I have used the stuff before and will use it again. It does work. Time to bite the bullet (pun intended ) and just put a good (Lilja = great) barrel on it. My plan is for this gun to be my go-to Alaska and Africa rifle. Might as well make it the great gun it should have been.

I fear I may have stepped on this thread a bit, so with that

Congrats @Edge on the new set-up! Very Nice! Let us know how she shoots

I need that rifle in LH, been looking for a lh .375 winchester for a while now.

@IdaRam - no issues! Has there even been a thread that has stayed on track ?lol

Someone asked where to find one-I was looking at them last spring for under a grand and free "to store shipping." The price has gone up but sportsmans has them in stock. I decided to spend the money in Africa and just take an old rifle, but I'm jealous that you have one and I still do not! 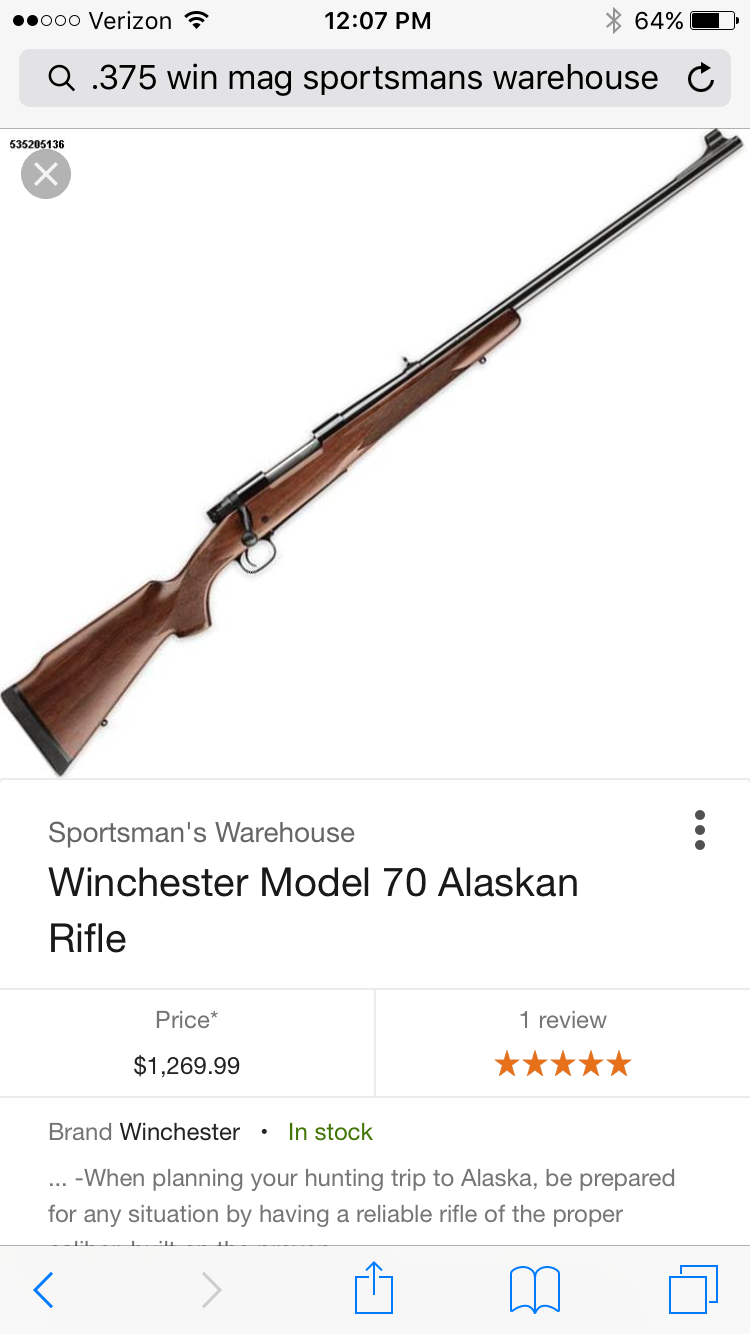 You can find them for less than $1100 if you look around on the net.

Took the action out of the stock and lightened up the trigger, tuned out very nice and bounced it off the floor a few times to make sure the safety held.

Need to seal up the wood on the inside, looks like raw wood. 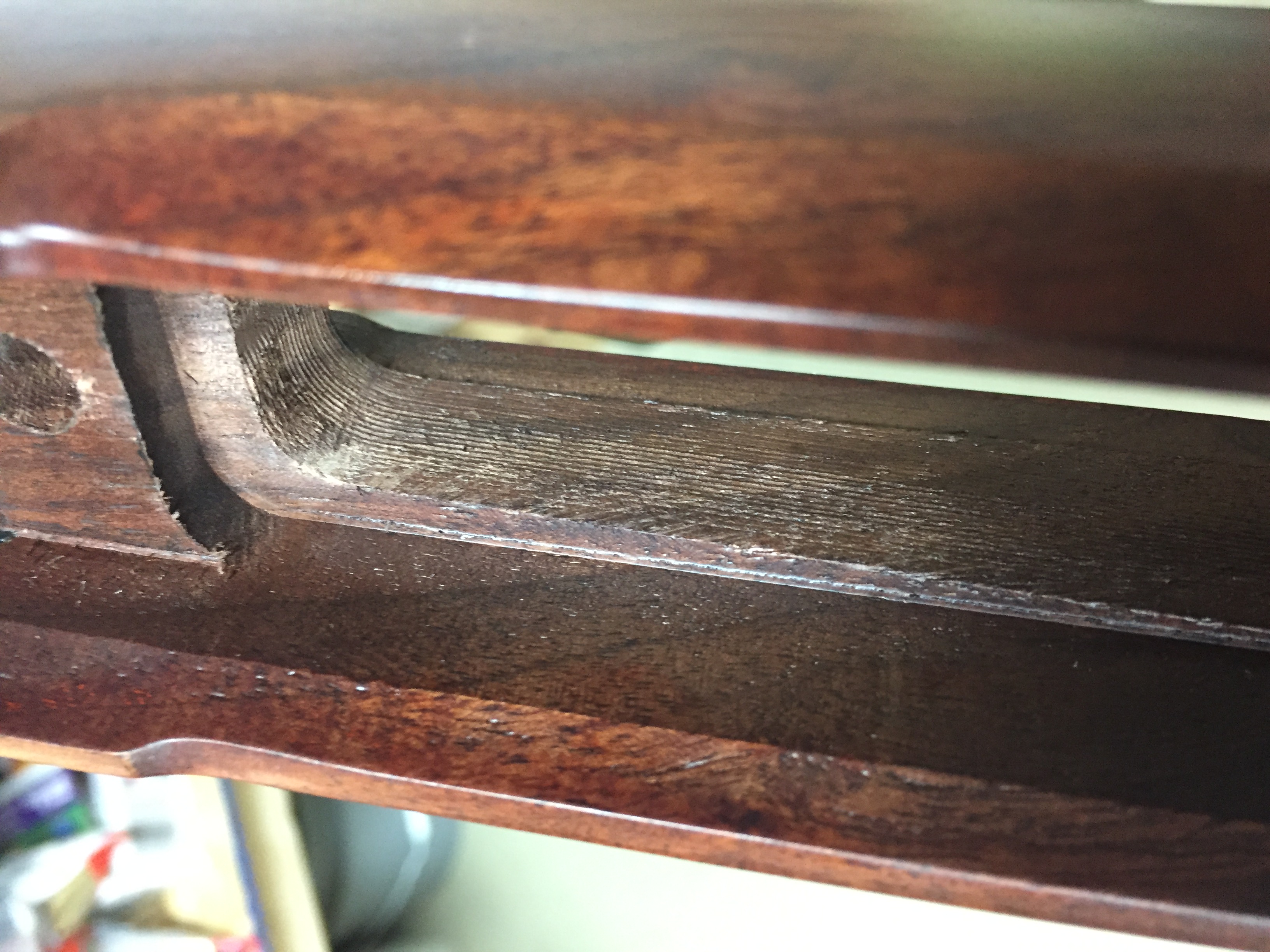 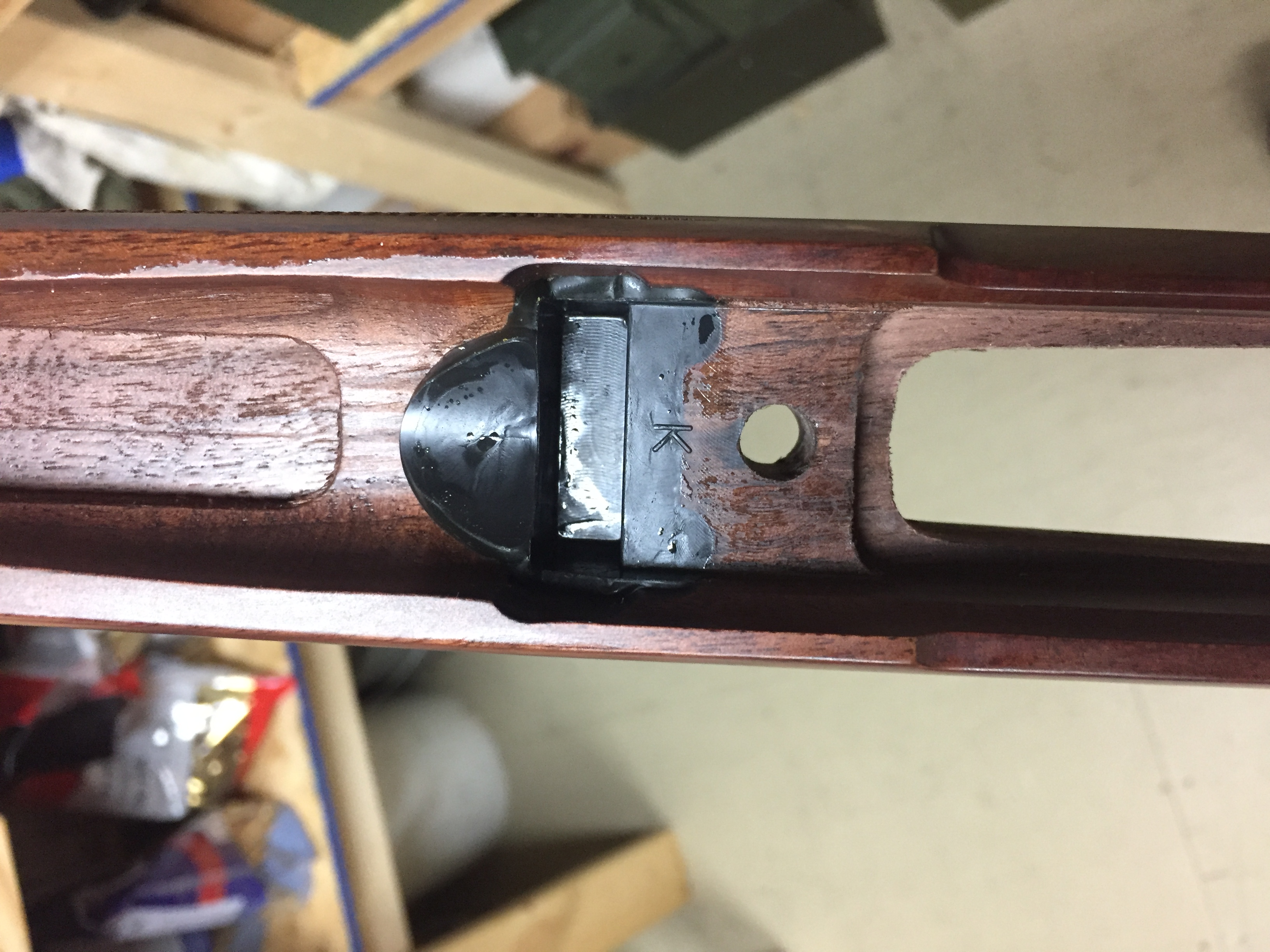 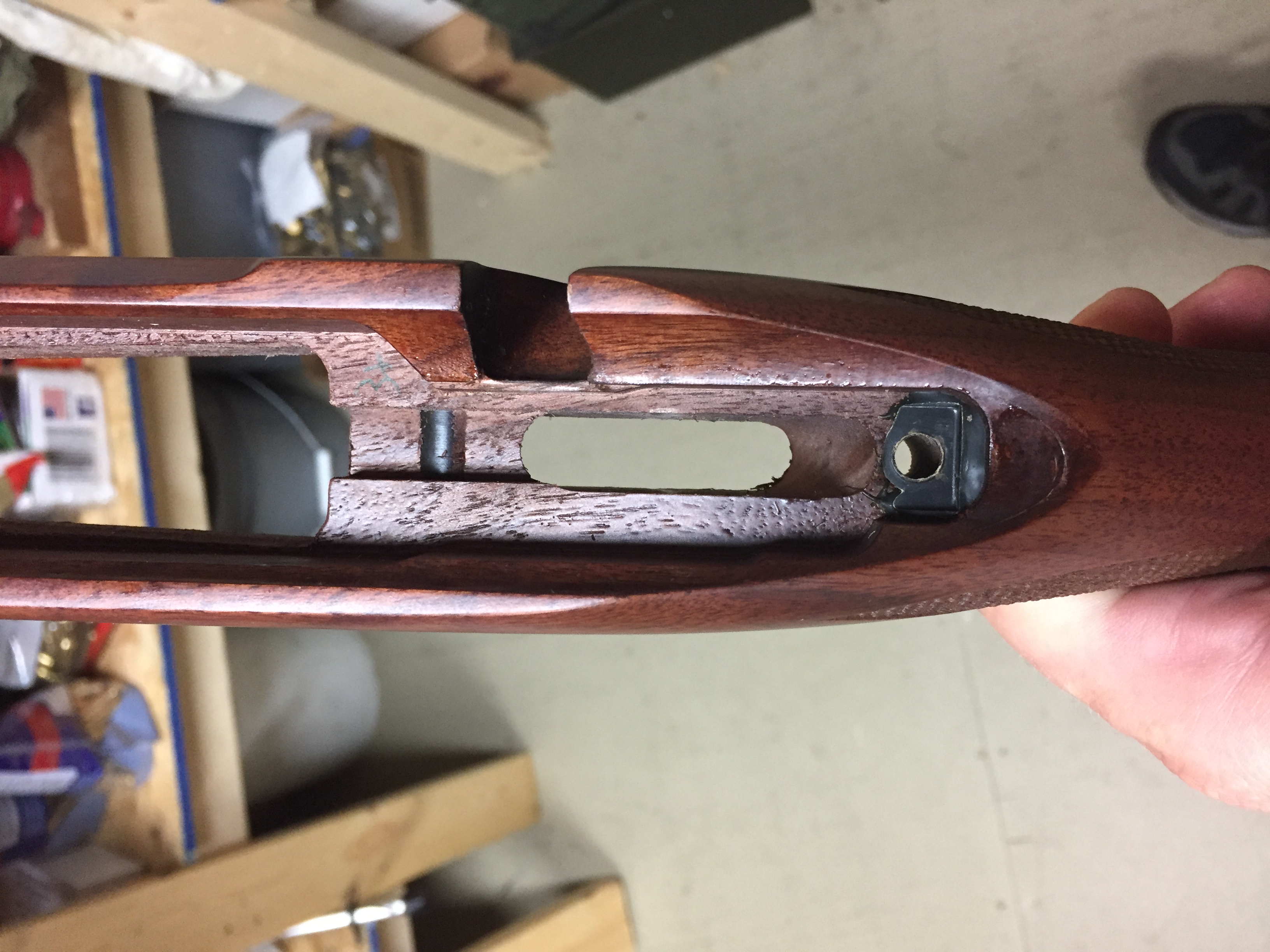 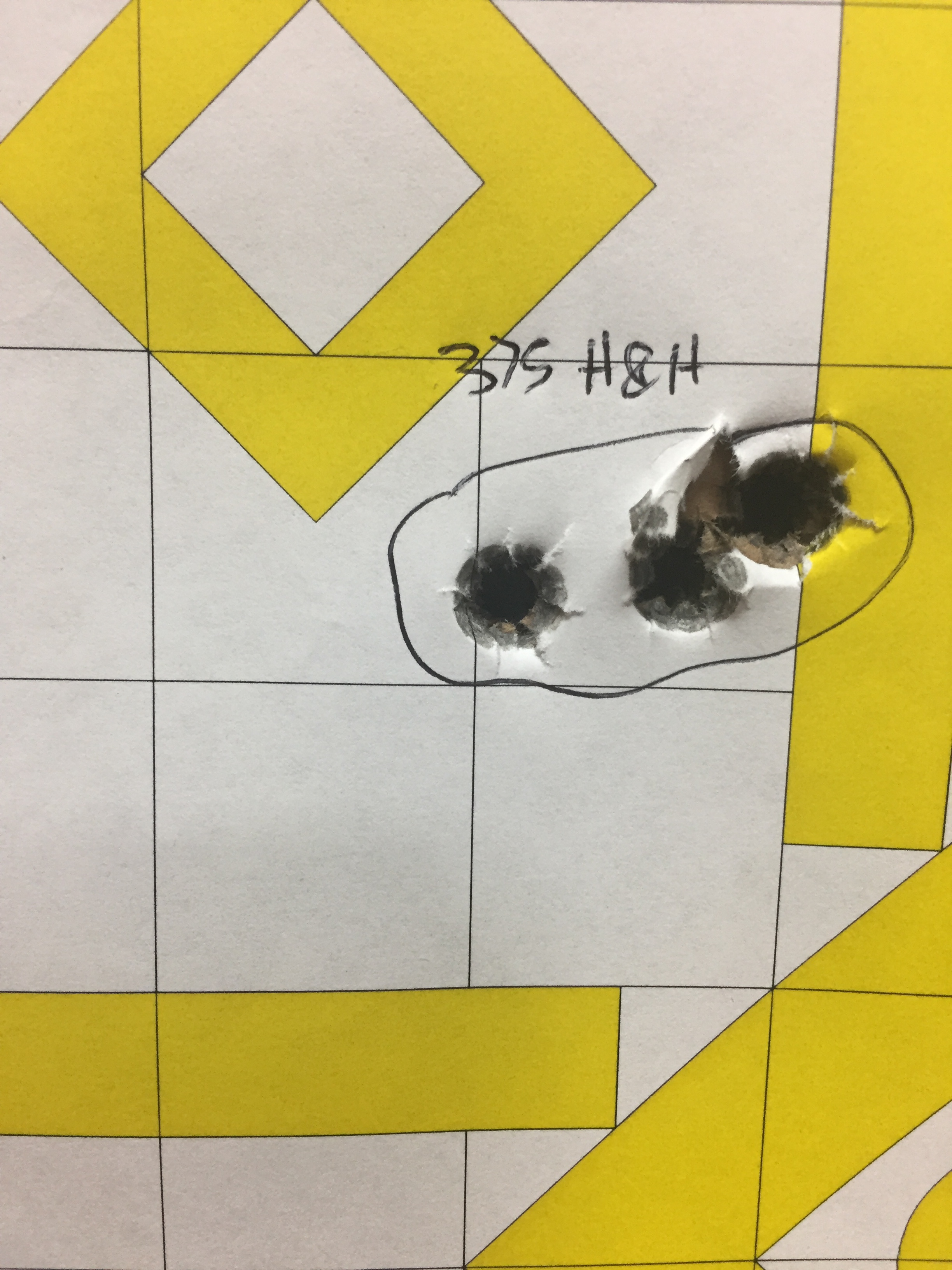 Will up the charge for our next date, followed by some 250gr TTSX!

Will let you know! Plan on sticking with H4895 initially.

Edge said:
Your rifle sounds nice! I haven't begun to really explore all the scope options yet, will keep Meopta in mind.

I need to pull mine out of the stock to see if i can lower the trigger pull weight, will take a look at the bedding that was done at the factory. I may bed it myself, new project as I haven't done a bedding job before.

Impossible to lower trigger weight I was told but it is very good as is..about 3 1/2...Bedding is only by recoil lug..Very fine rifle though..

ack said:
Impossible to lower trigger weight I was told but it is very good as is..about 3 1/2...Bedding is only by recoil lug..Very fine rifle though..
Click to expand...

The trigger can be adjusted, not a lot, but I did lower it. Followed the instructions in the manual.

You can see the "bedding", posted some pics earlier in the thread. A spot at the rear tang screw and the front lug. 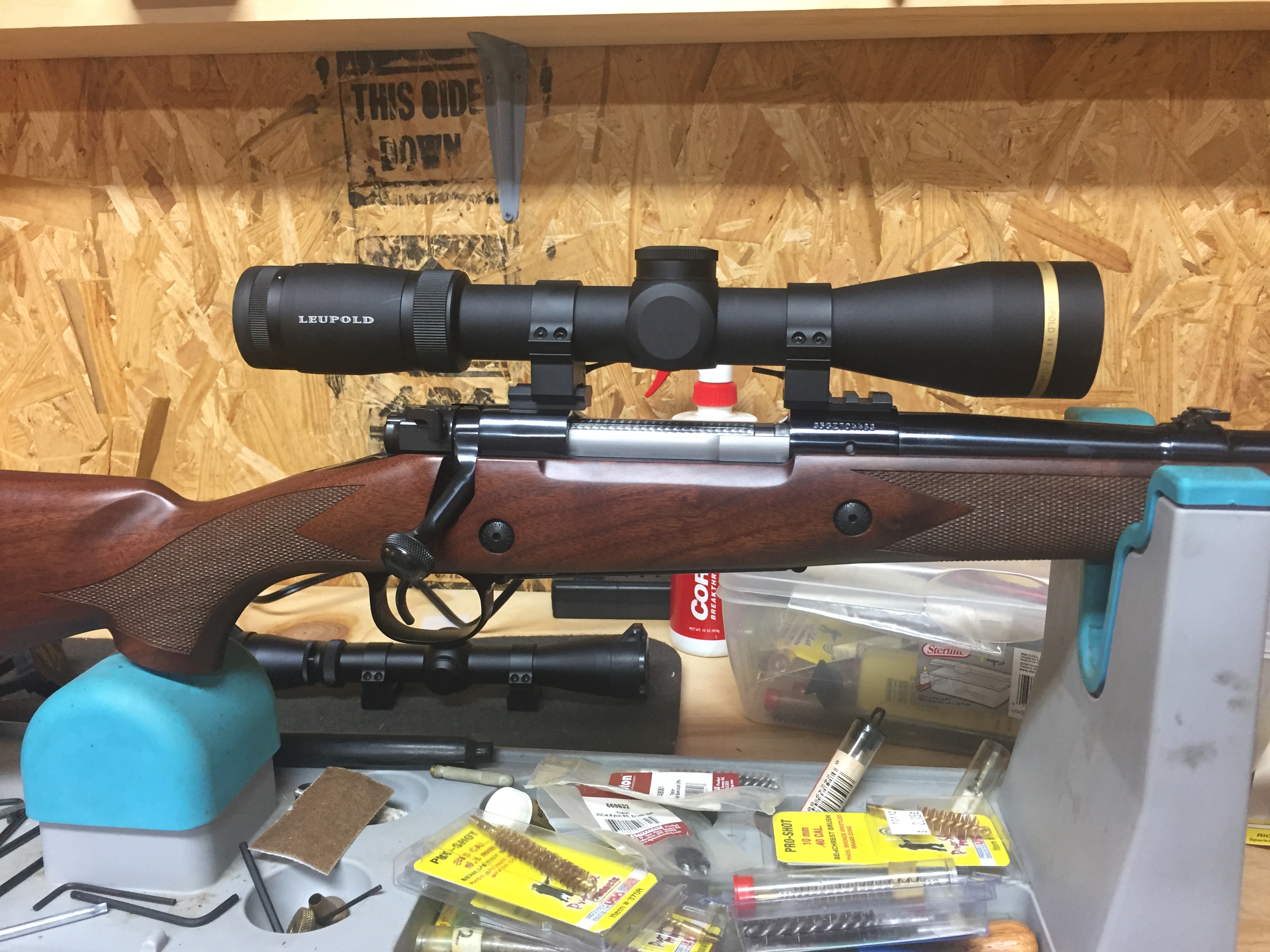 Put some new glass on the Alaskan today, VX-6 2-12 with duplex and firedot. Haven't bought a Leupold in years and got a good deal on the close-out pricing.

Great looking Rifle, been thinking about a Safari Model, FYI Winchester says the Barrel is Hammer Forged
Last edited: Sep 9, 2017
Be Yourself Everyone Else Is Taken

opticspecialist said:
I need that rifle in LH, been looking for a lh .375 winchester for a while now.
Click to expand... 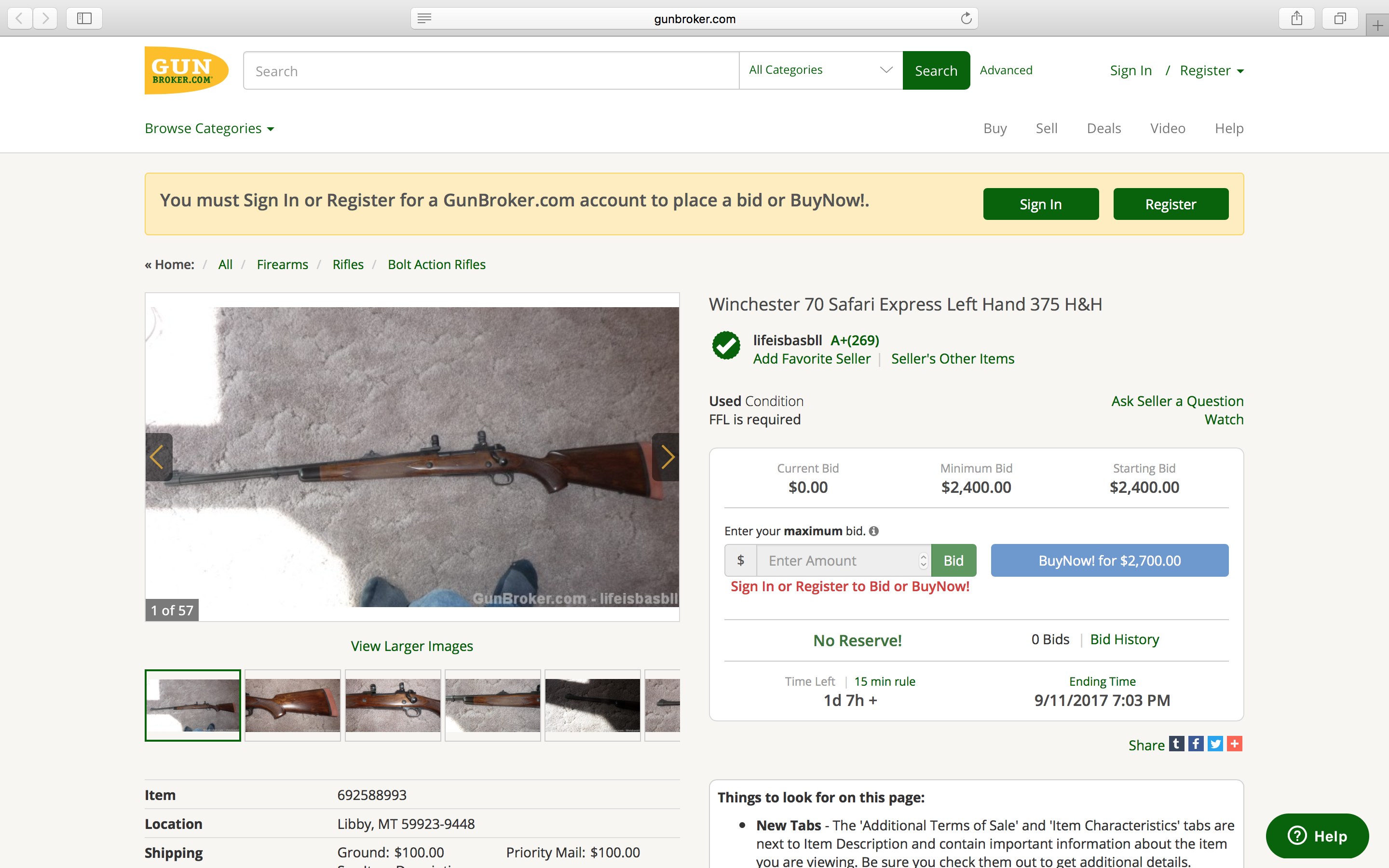 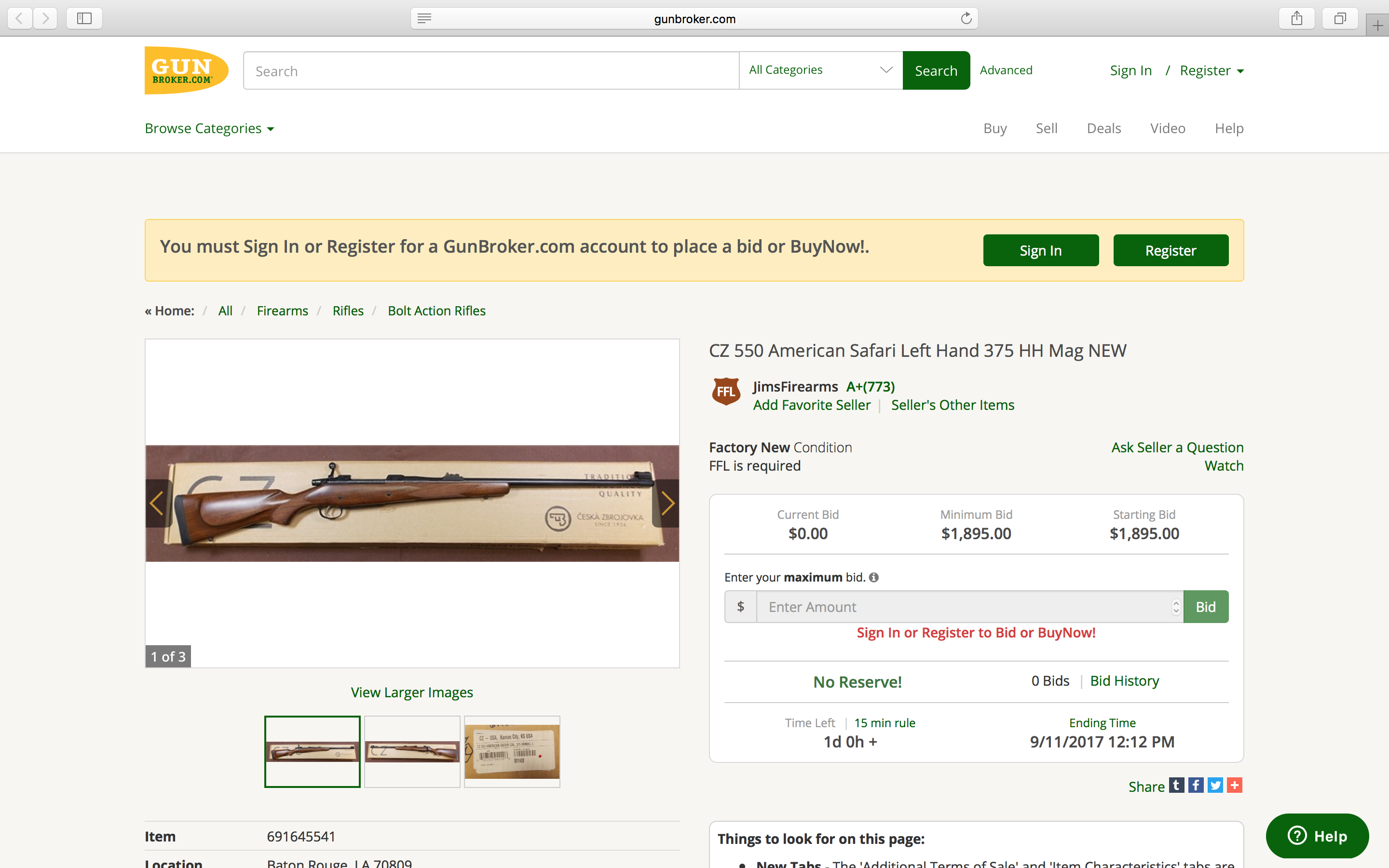 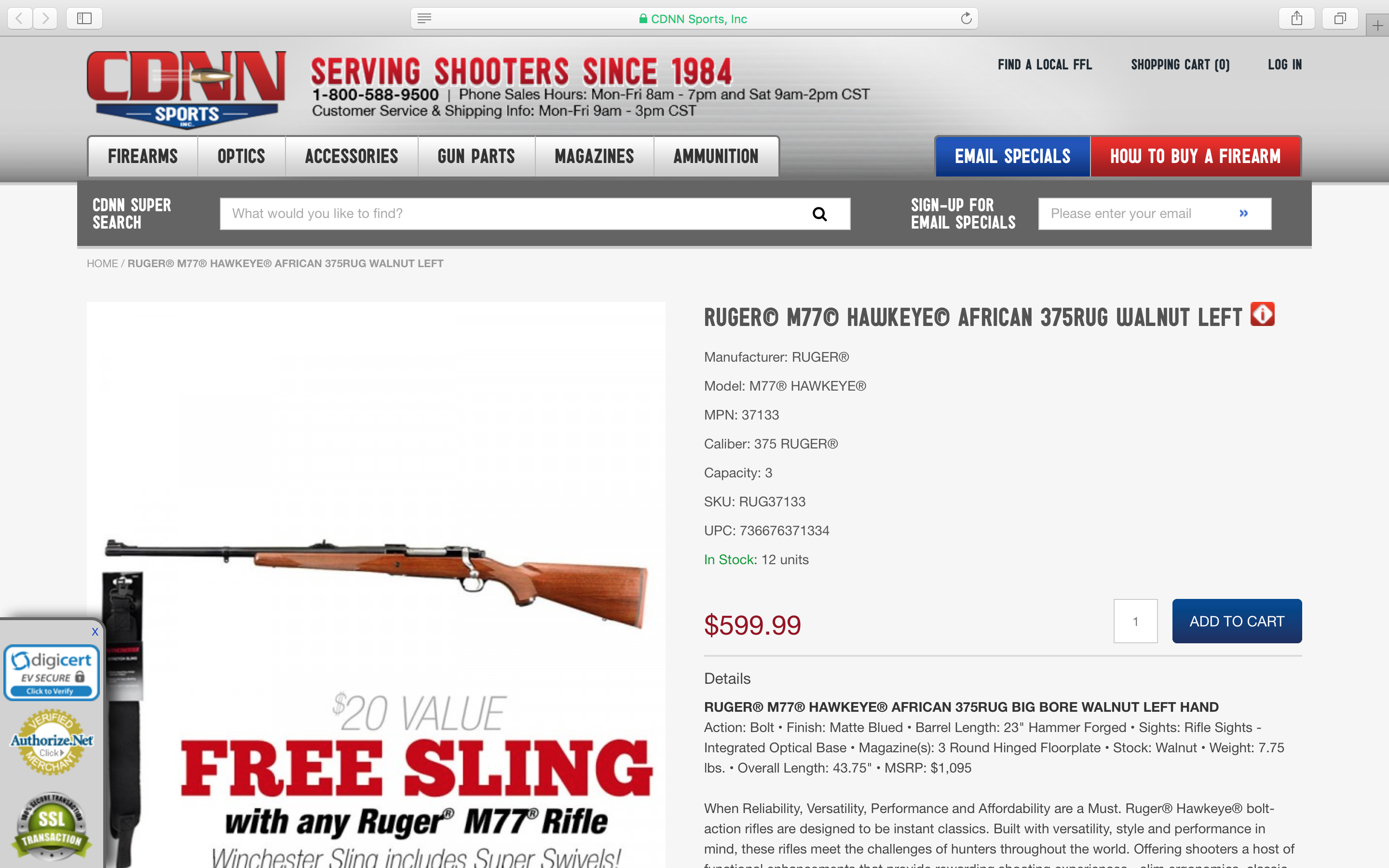 Yeah the Ruger is the bargain, no doubt about it. As much as I like CZ 550s, the price on the LH models is too much of a premium in my opinion. My son wanted a Mauser variant 375 H&H in stainless/synthetic. I bought my son a used M70 stainless/synthetic classic in 416 Rem for about that price. He loves it.

Doing well with nice rifle! I bought divorced one, one of the last from New Haven. It took me a month to scrub the abuse out of the bore but after finding a load it liked it was a shooter for a .375. Took 8 animals in SA with one shot apiece.I hope yours does as well! Only 2 cents is you don't need a scope up to 12 power in mho. I never went past 6 on my hunt. 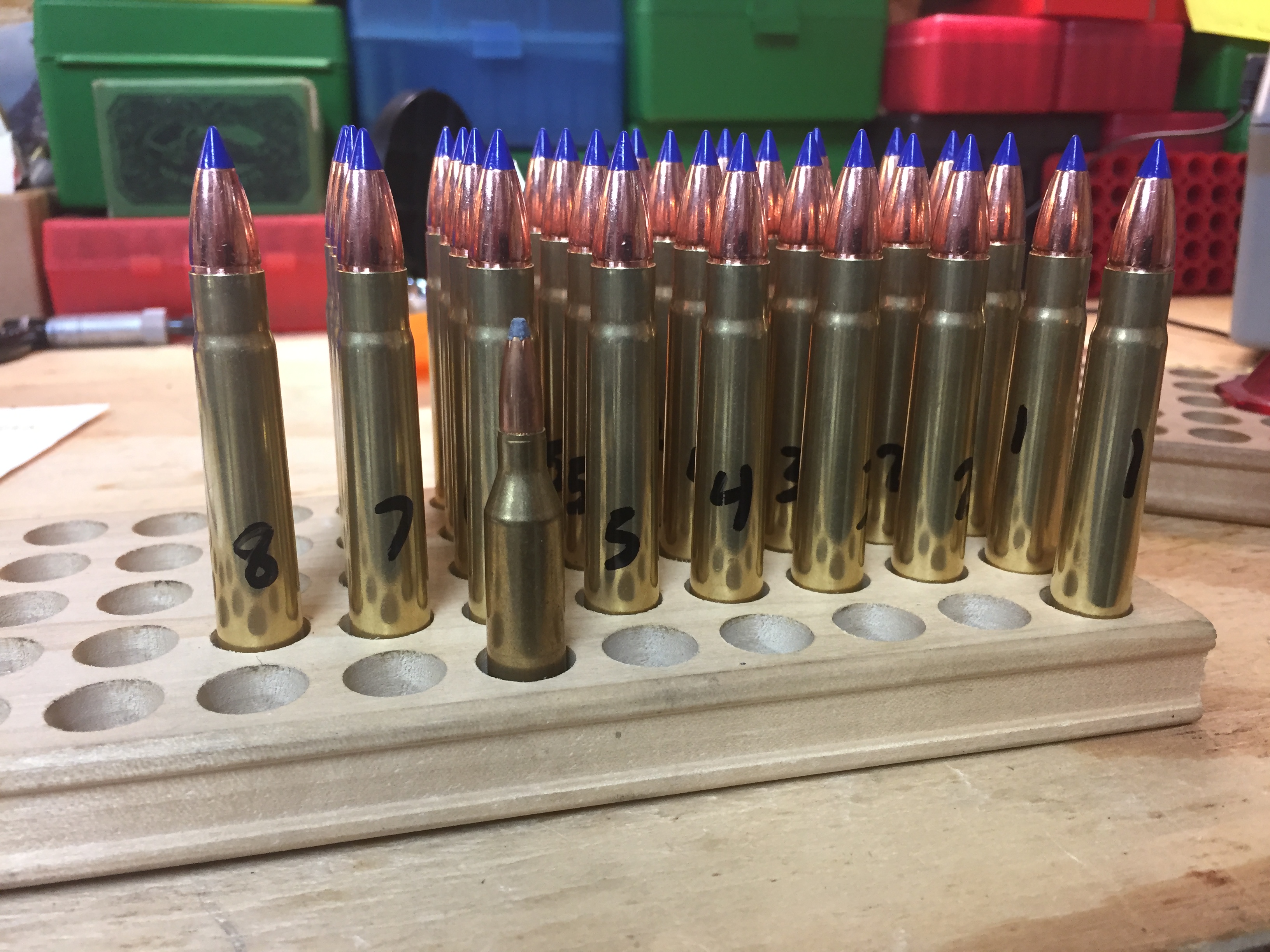 Edge
You must log in or register to reply here.