Although Zebra species are not scored for either the Safari Club International (SCI) Record Book of Trophy Animals nor for the Rowland Ward Records of Big Game Book, they are still regularly hunted by trophy hunters. The reason the Zebra is hunted is for their skin as a trophy or as bait for hunting Leopard and/or Lion.

The name "zebra" comes from an old Portuguese word which means "wild ass". Zebras are African equids best known for their distinctive white and black stripes. Their stripes come in different patterns unique to each individual like a fingerprint, no two are alike. Zebras are actually black or dark animals with white stripes. Although seemingly improbable the stripes of a Zebra act as a camouflage mechanism. Anyone who has observed Zebra in their Natural habitat can attest to the excellent camouflage that their stripes provide.

Being able to accurately assess Zebra gender is particularly difficult therefore listening to the advice of your Professional Hunter is imperative. Ultimately it requires having seen an awful lot of Zebra to become adept at judging the sex of this particular species. Even PHs will often rely heavily on the instincts of their native trackers to determine which Zebra are stallions. So difficult is it to assess gender that most countries hunting permits do not even distinguish between male and female as they do for most species.

In most countries both stallions and mares can be hunted however ideally taking an old male who is past his prime is always preferable. Although since the skin is the trophy from this animal, some hunters prefer to take younger bachelor males as their skins are less scared from years of fighting.

Since both male and female Zebras are of similar size and weight this cannot be used as a method to differentiate between the sexes. The girth of the neck can sometimes be used as a characteristic to look at to distinguish between a stallion and a mare, however I personally do not feel that this way to identify between them can be used often enough to be considered as a reliable method of judgment.

A significant factor to look at to differentiate between a male and a female is behavior. By observing behavior the hierarchy can sometimes become noticeable and reveal the dominant stallion. This is often a skill that takes years of observation to develop however here are a few things that you probably will be able to discern. 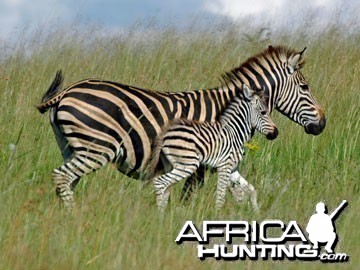 Burchell's Zebra (Plain Zebra) with a foal clearly distinguishing her as a mare since a foal never strays far from it's mother. 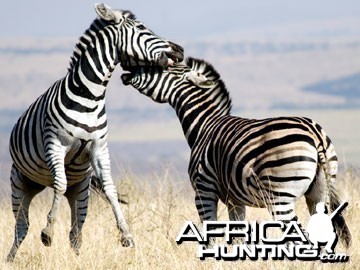 As with horses, Zebra genitalia of both sexes is extremely difficult to see. 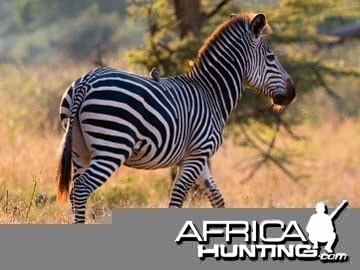 Even at close range, from the back it is very unlikely that you will be able to see the testicles of a Zebra stallion. More often if you see something back there it is the teats from a lactating mare 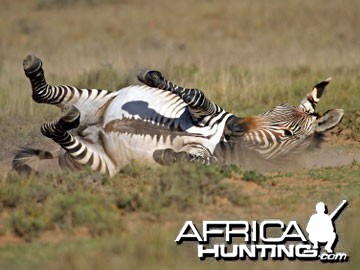 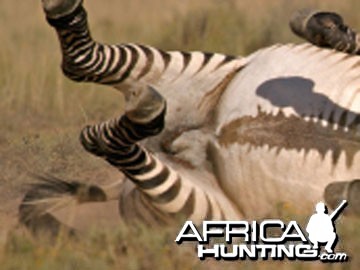 If the Zebra is facing away from you, look at the black part between their hind legs coming down from their tail. The black part in the crease of their rump is much broader and longer on a mare than on a stallion. This dark part is where the anus and the vulva of the mare are located. Zebra are nearly always swinging their tails so you will probably need to observe them for some time to see this distinguishing characteristic. 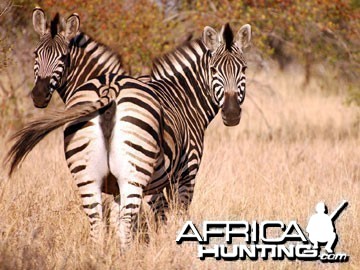 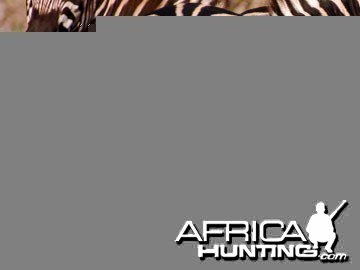 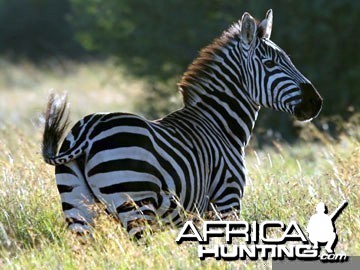 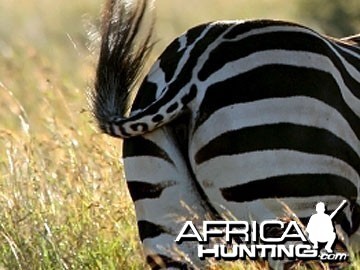 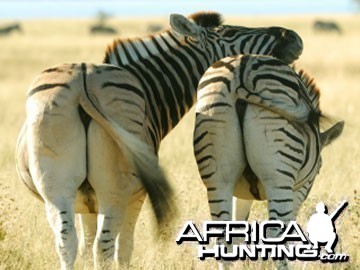 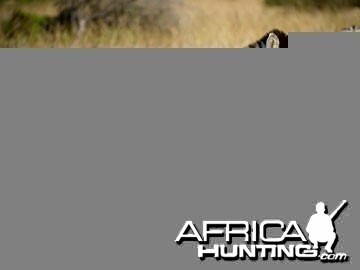 On rare occasion you may observe a Zebra displaying an un-retracted penis, obviously a stallion

Like most members of the horse family, Zebras are highly sociable animals. Their social structure, however, depends on the species. Mountain Zebras and Plains Zebras live in groups, known as "harems", consisting of one stallion with up to six mares and their foals. Bachelor males either live alone or with groups of other bachelors until they are old enough to challenge a breeding stallion.

Although these two species of Zebra can have overlapping ranges, they do not interbreed and there are clear distinctive physical characteristics that sets them apart. 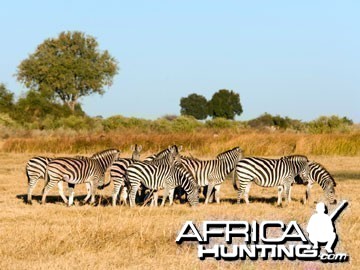 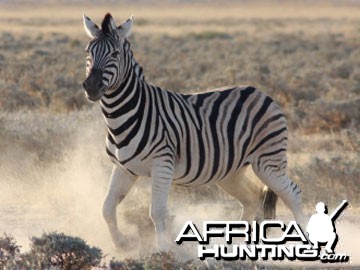 The Plains Zebra (Equus quagga, formerly Equus burchelli), also known as the Common Zebra or the Burchell's Zebra, is the most common and geographically widespread Zebra in Africa. It once ranged from the south of Ethiopia right through east Africa as far south as Angola and eastern South Africa.

Here are some of the distinctive characteristics of the Burchell's Zebra:
• Prominent stripes on body however stripes on the legs become less prominent further down the leg and can sometime disappear
• Stripes continue to reach around to the underbelly
• Sometimes shadow stripes are present (lighter stripes between prominent dark stripes)
• Hindquarter stripes lead straight into the tail 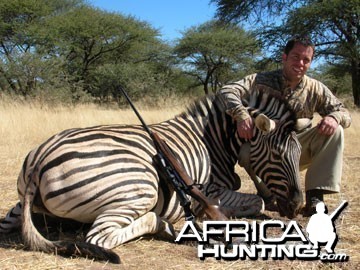 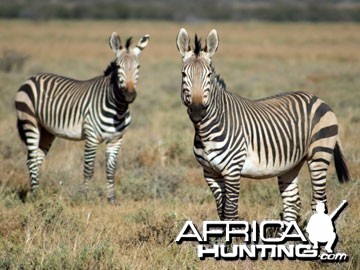 Hartmann's Mountain Zebra (Equus Zebra Hartmannae) is a subspecies of the Mountain Zebra found in far south-western Angola and western Namibia. They are agile climbers and are able to live in arid conditions and steep mountainous country.

Here are some of the distinctive characteristics of the Hartmann's Mountain Zebra:
• Prominent stripes on body and legs all the way down to the hooves
• No stripes on their under belly
• No shadow stripes
• Face has distinctive beige or brown colored areas
• Hindquarter stripes tapering in a "Z" pattern leading straight down to the tail 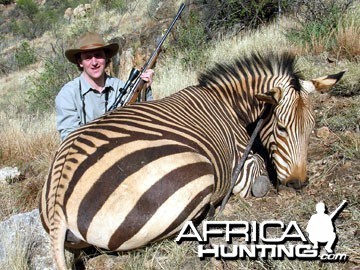 Hartmann's Zebra (Mountain Zebra) showing prominent body stripes with no shadow stripes, face with distinctive brown coloration and the hindquarter stripes tapering in a "Z" pattern leading straight down to the tail 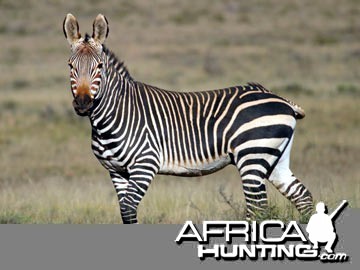 Cape Mountain Zebra (Equus zebra zebra) is a subspecies of the Mountain Zebra found in the Western and Eastern Cape of South Africa. It has been argued that it should be considered a separate species than the Hartmann's Mountain Zebra however this argument is not supported by genetic evidence.

Below are several trophy pictures of Burchell's and Hartmann's Zebras. Using the points from above see how good you are at differentiating between these two species before looking at the captions. In the pictures you can also see the uniqueness of each individual Zebra, how their hides vary in color and their strips in thickness and darkness. 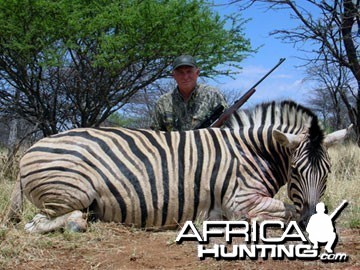 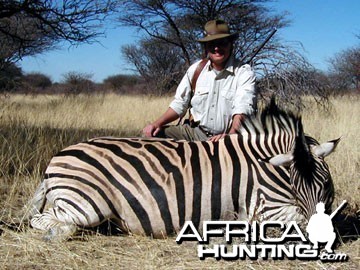 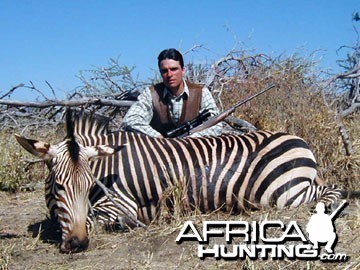 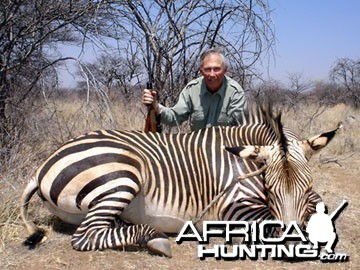 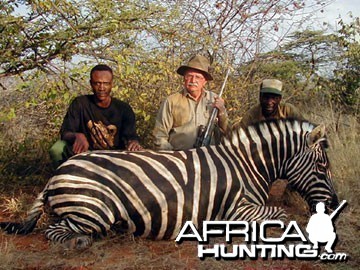 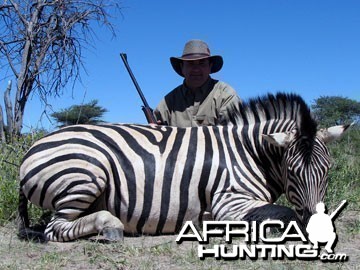 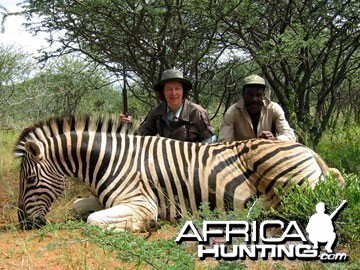 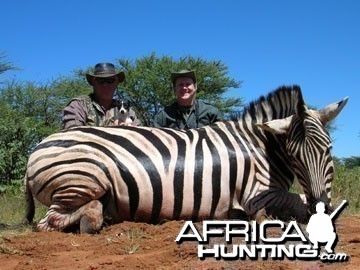 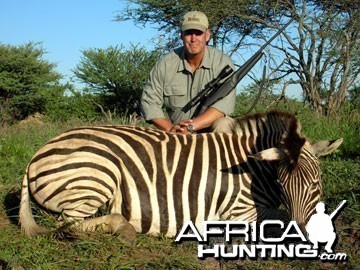 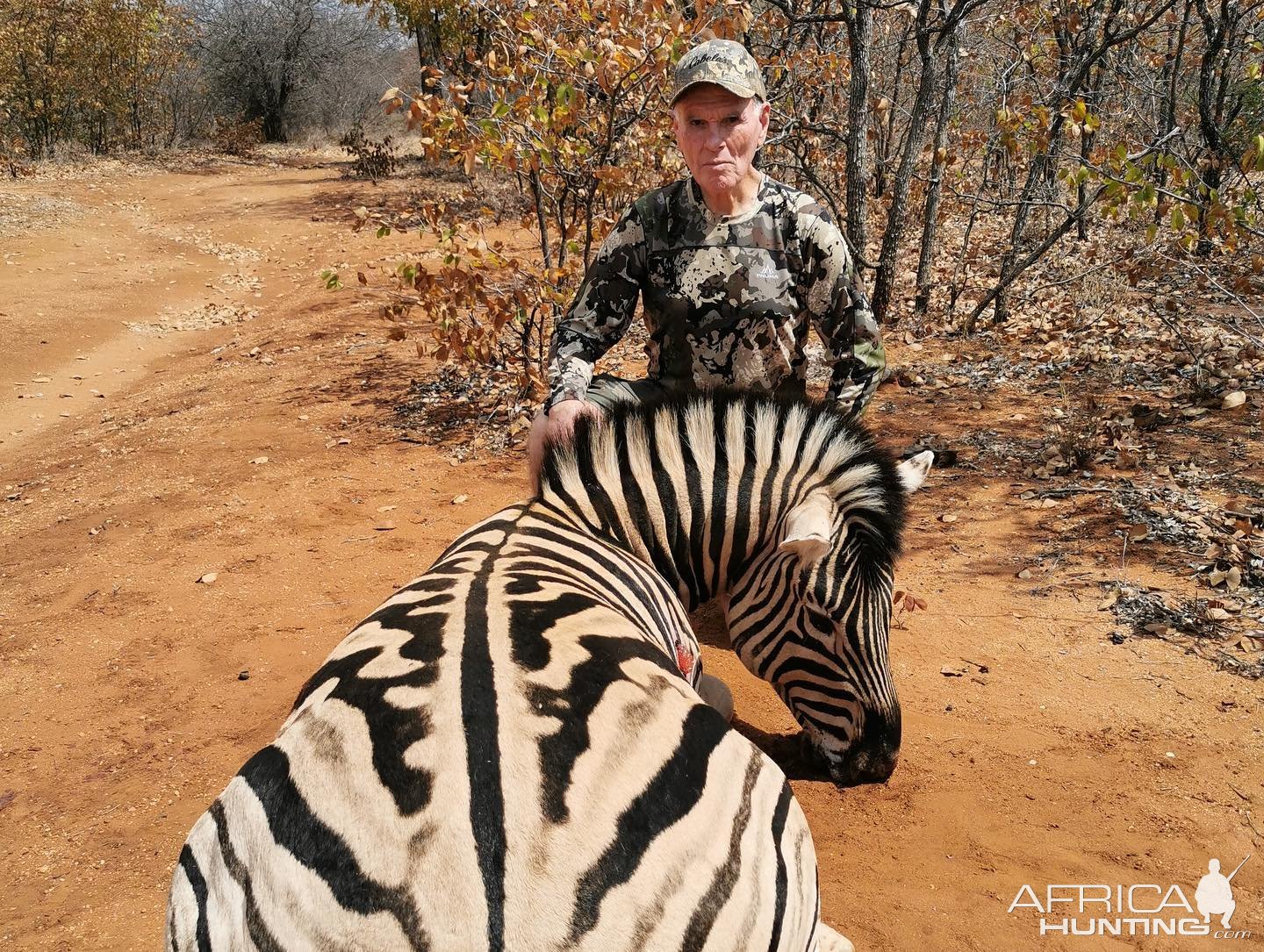 There is one more zebra species, the Grévy's Zebra, however it's no longer legal to hunt. Here is a picture of one of our members @xausa from the early 1970's when he was in Kenya on safari. 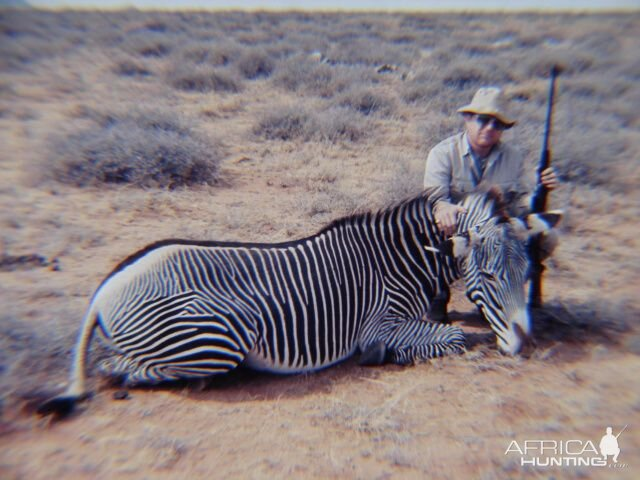 I did a little write up after talking with @xausa on the phone. You can read about it here...
https://www.africahunting.com/threads/zebra-species-question.62856/post-967974
“They that can give up essential liberty to obtain a little temporary safety deserve neither liberty nor safety.” Benjamin Franklin 1759
"An armed society is a polite society. Manners are good when one may have to back up his acts with his life." Robert Heinlein 1942
You must log in or register to reply here.

C
Hartmann's Mountain Zebra over Burchell's Plain Zebra which one

There's A Zebra Hiding Amongst This Huge Herd Of Wildebeest: Can You Spot It?