Edward James "Jim" Corbett (25 July 1875 in Nainital, India - 19 April 1955 in Nyeri, Kenya) was a British hunter, conservationist and naturalist, famous for slaying a large number of man-eating tigers and leopards in India. 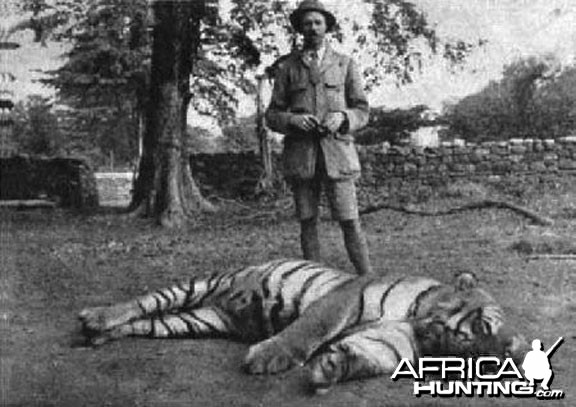 Jim Corbett with the slain Bachelor of Powalgarh.

Corbett held the rank of colonel in the British Indian Army and was frequently called upon by the government of the United Provinces, now the Indian states of Uttar Pradesh and Uttarakhand, to slay man-eating tigers and leopards who had killed people in the villages of the Garhwal and Kumaon region. His success in slaying the man-eaters earned him much respect and fame amongst the people residing in the villages of Kumaon, many of whom considered him a sadhu (saint).

Corbett was an avid photographer and after his retirement, authored the Man-Eaters of Kumaon, Jungle Lore and other books recounting his hunts and experiences, which enjoyed much critical acclaim and commercial success. Corbett spoke out for the need to protect India's wildlife from extermination. The Corbett National Park in Kumaon was named in his honour in 1957.

Early Life
Edward James Corbett was born of Irish ancestry in the town of Nainital near the Kumaon foothills of the Himalayas, in the United Provinces (now in the Indian state of Uttarakhand). Jim grew up in a large family of 13 children and was the eighth child of Christopher and Mary Jane Corbett. His parents had moved to Nainital in 1862, after Christopher Corbett had been appointed postmaster of the town. In winters, the family used to move to the foothills, where they owned a cottage near Kaladhungi. After his father's death, when Jim was 4 years old, his eldest brother Tom took over as the postmaster of Nainital. From a very young age, Jim was fascinated by the forests and the wildlife around his home in Kaladhungi. At a young age he learned to identify most animals and birds by their calls - owing to his frequent excursions. Over time he became a good tracker and hunter. Jim studied at the Oak Openings School (later renamed Philander Smith College) and Sherwood College, Nainital. Before he was 18, he had to quit school and found an employment with the Bengal and North Western Railway, initially working as a fuel inspector at Manakpur in the Punjab, and subsequently as a contractor for the trans-shipment of goods across the Ganges at Mokameh Ghat in Bihar.

Hunting Man-eaters (Leopards & Tigers)
Between 1907 and 1938, Corbett tracked and shot a documented 19 tigers and 14 leopards -- a total of 33 recorded and documented man-eaters. It is estimated that these big cats had killed more than 1,200 men, women and children. The first tiger he killed, the Champawat Tiger in Champawat, was responsible for 436 documented deaths. Recent analysis of carcasses, skulls and preserved remains show that most of the man-eaters were suffering from disease or wounds like porcupine quills embedded deep in the skin or old gunshot wounds, which never healed. 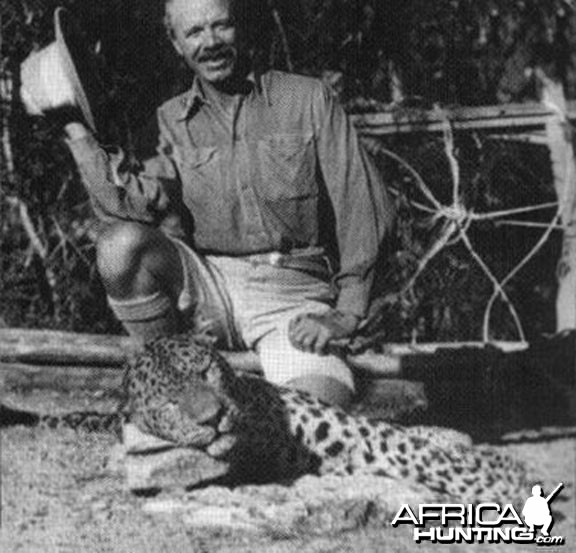 Jim Corbett after killing the man-eating Leopard of Rudraprayag in 1925.

He also shot the Panar Leopard, which allegedly killed 400 people after being injured by a poacher and thus being rendered unable to hunt its normal prey. Other notable man-eaters he killed were the Talla-Des man-eater, the Mohan man-eater, the Thak man-eater and the Chowgarh tigress. However, one of the most famous was the man-eating Leopard of Rudraprayag, which terrorised the pilgrims to the holy Hindu shrines Kedarnath and Badrinath for more than ten years. This leopard's skull and dentition showed advanced, debilitating gum disease and tooth decay, such as would limit the animal in killing wild game and drive it towards man-eating. The Thak man-eating tigress, when skinned by Corbett, revealed two old gunshot wounds; one in her shoulder had become septic, and as Corbett suggested, could have been the reason for the tigress to have turned man-eater.

By his own account, Corbett shot the wrong animal at least once, and greatly regretted the incident. In addition, man-eaters are quite capable of stalking the hunter. Therefore, Corbett preferred to hunt alone and on foot when pursuing dangerous game. He often hunted with a small dog named Robin, about whom he wrote much in his first book The Man-Eaters of Kumaon. 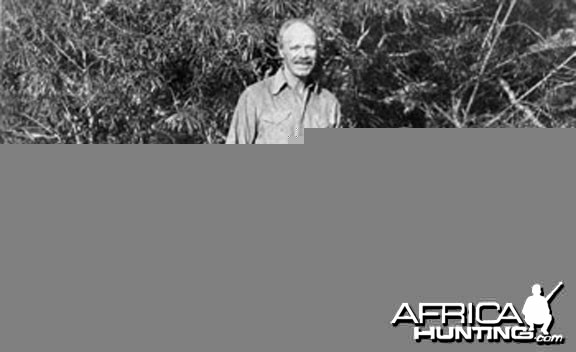 At times, Corbett took great personal risks to save the lives of others. Still remembered in India as a great preservationist, his memories command fond respect in the areas he worked in.

Hunter Turned Conservationist
Corbett bought his first camera in the late 1920s, and inspired by his friend F. W. Champion, started to record tigers on cine film. Although he had an intimate knowledge of the jungle, this was demanding to obtain good pictures, as the animals were exceedingly shy. As his admiration for tigers and leopards grew, he resolved never to shoot them unless they turned man-eater or posed a threat to cattle.

Corbett was deeply concerned about the fate of tigers and their habitat. He lectured to groups of school children about natural heritage and the need to conserve forests and their wildlife; promoted the foundation of the Association for the Preservation of Game in the United Provinces and the All-India Conference for the Preservation of Wildlife. Together with F. W. Champion he played a key role in establishing India's first national park in the Kumaon Hills, the Hailey National Park, initially named after Lord Malcolm Hailey. The park was renamed in his honour in 1957.

Retiring in Kenya
After 1947, Corbett and his sister Maggie retired to Nyeri, Kenya, where he continued to write and sound the alarm about declining numbers of jungle cats and other wildlife. Jim Corbett was at the Tree Tops Hotel, a hut built on the branches of a giant ficus tree, when Princess Elizabeth stayed there on February 5-6, 1952, at the time of the death of her father, King George VI. Corbett wrote in the hotel's visitors' register:

For the first time in the history of the world, a young girl climbed into a tree one day a Princess, and after having what she described as her most thrilling experience, she climbed down from the tree the next day a Queen - God bless her.

Jim Corbett died of a heart attack a few days after he finished writing his sixth book Tree Tops, and was buried at St. Peter's Anglican Church in Nyeri.

Legacy
Jim Corbett's first book Man-eaters of Kumaon was a great success in India, the United Kingdom and the United States; the first edition of the American Book-of-the-Month Club being 250,000 copies and later translated into 27 languages. His 4th book Jungle Lore is considered his autobiography.

The Jim Corbett National Park in Uttarakhand, India has been renamed in his honour in 1957. He had played a key role in establishing this protected area in the 1930s.

In 1968, one of the five remaining subspecies of tigers was named after him; Panthera tigris corbetti, the Indochinese Tiger, also called Corbett's tiger.

In 1994, Corbett's long-neglected grave was repaired and restored by Jerry A. Jaleel, founder and director of the Jim Corbett Foundation, which has members worldwide. 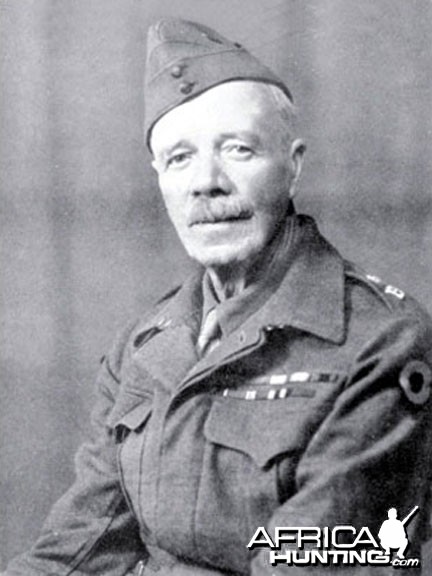 Documentary
In 1986, the BBC produced a docudrama titled Man-Eaters of India with Fred Treves in the role of Jim Corbett. An IMAX movie India: Kingdom of the Tiger based on Corbett's books, was made in 2002 starring Christopher Heyerdahl as Jim Corbett. A TV movie based on The Man-Eating Leopard of Rudraprayag starring Jason Flemyng was made in 2005.

A little on the life of a great hunter and a naturalist.

Thanks a lot monish.
Jerome Philippe, Founder of AfricaHunting.com

Photo of the 275 John Rigby gifted to Jim Corbett By the Commissioner JP Hewett for having shot the dreaded maneater Leopard of Rudraprayag in 1907. 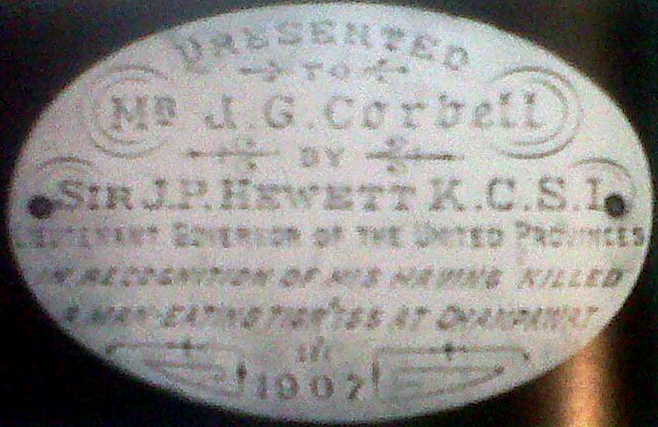 My favorite authors for hunting Africa and India