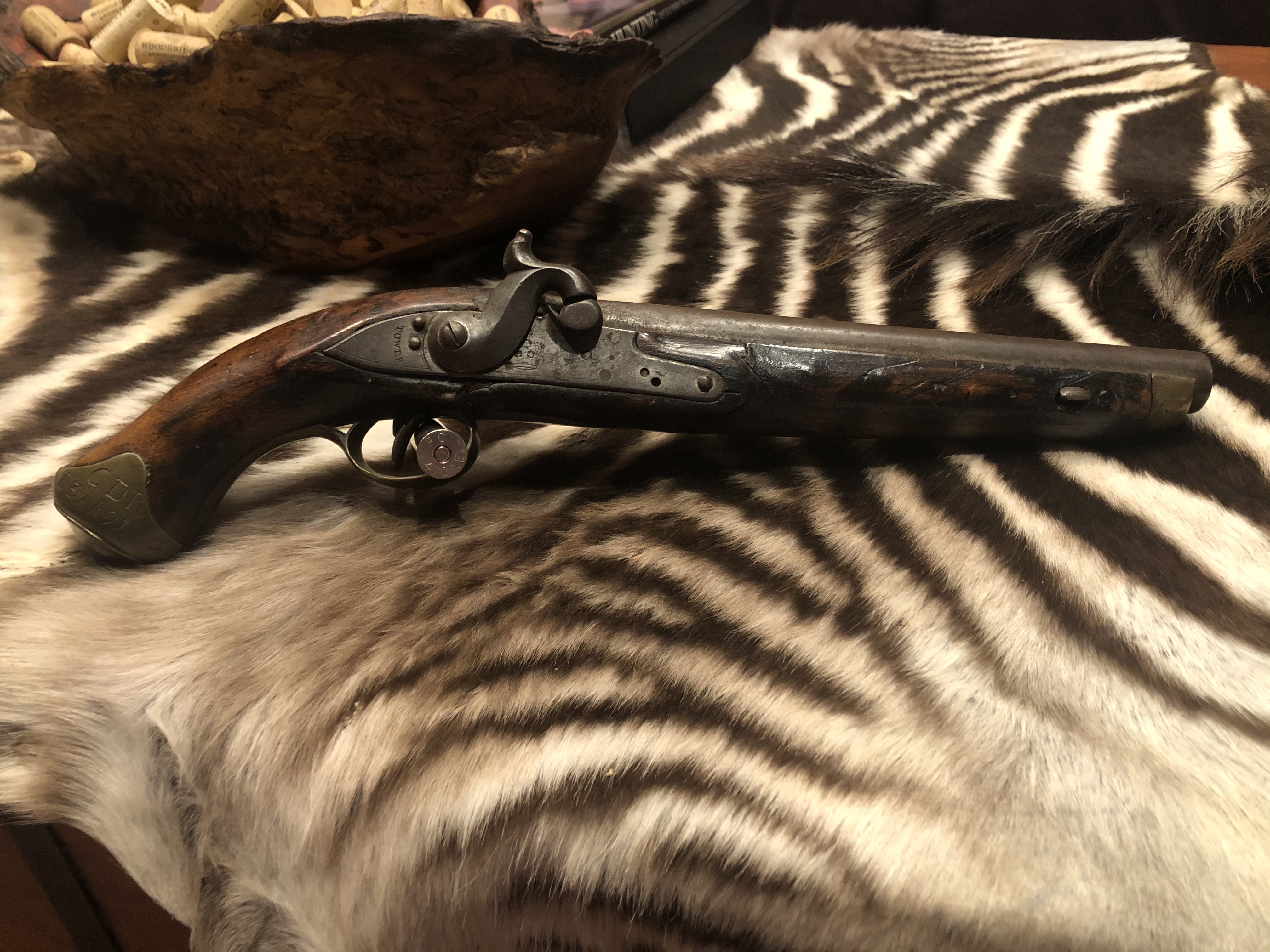 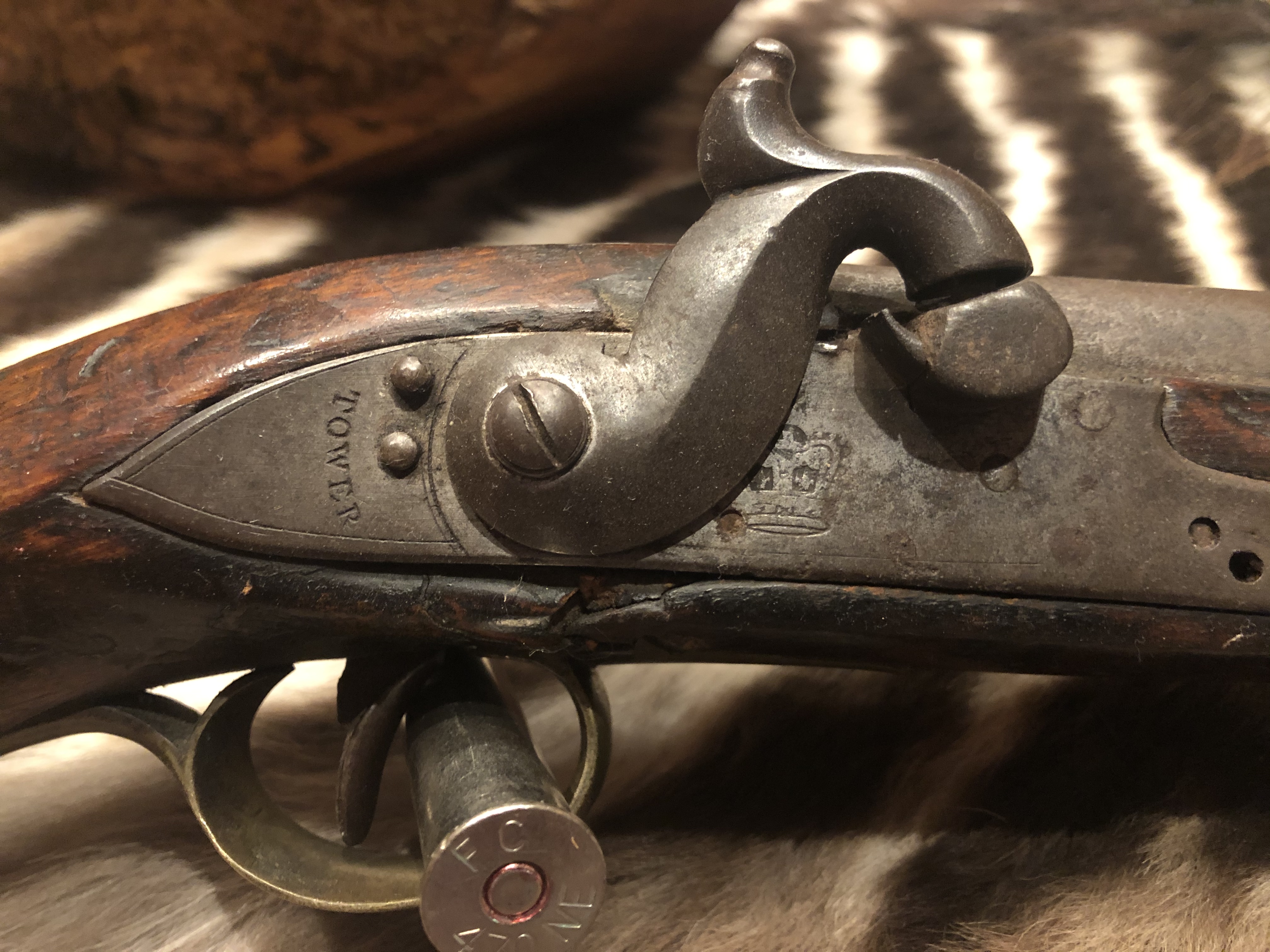 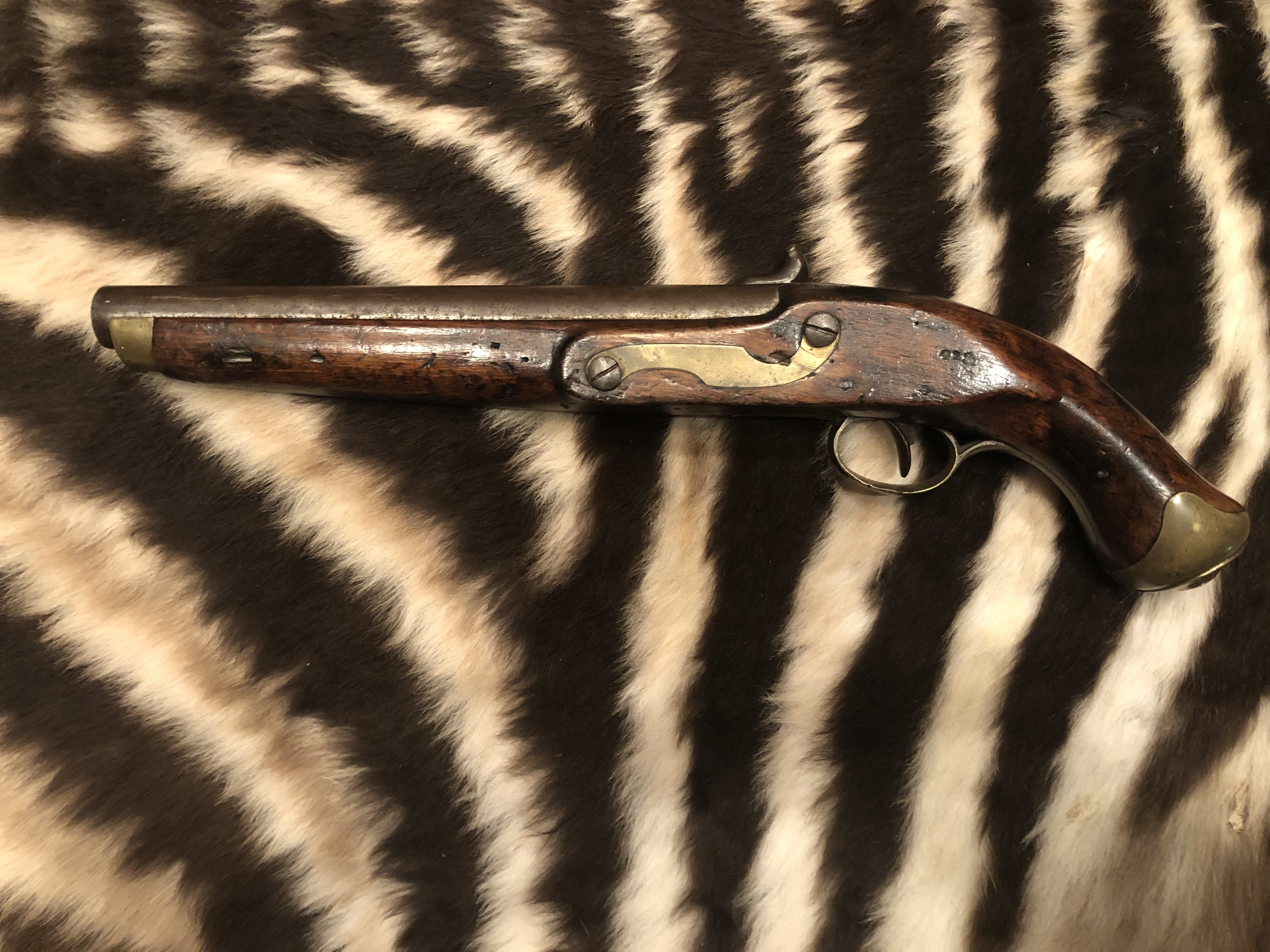 Can anyone provide any information of this Tower Antique “Pistol?” My father who is 78 years old bought when he was an adolescent. He told me he saw it in the store and worked hard all summer saving his money until he was finally able to procure with a little help from the shop owner. Thank you in advance.

"Tower" pistols referred to any British military pistol assembled at the armory of the Tower of London, over the 1740-1840 period. Originally they were all flintlocks, then there were converted flintlocks mixed with production percussion pistols. There were different versions for the Navy (Sea Pattern), the cavalry (including long-barrelled and short-barrelled versions depending on the type of cavalry), and the infantry (Land Pattern).

Based on the assorted versions I've seen, it looks to me that it's a flintlock-to-percussion conversion, since the purpose-made percussion variants all seem to have sort of boxy stocks with squared-off grips at a sharper angle/curve instead of that more gentle curve, and don't have that big brass butt cap on either. You can see what appear to be plugged-in holes, where the superfluous flintlock parts were removed.

Now, normally you'd see a royal cypher under the crown on the lock, and if it was a conversion, it'd likely be G.R. for George II-IV. W.R. for William IV or V.R. for Victoria would be possible but by Victoria's reign they'd be purpose-made percussion pistols. Your example doesn't have one that I can see.
"I suddenly remembered my Charlemagne: 'Let my armies be the rocks, and the trees, and the birds in the sky.'"

@WebleyGreene455, That seems a pretty fair assessment of that pistol. The other thought I had was it's possibly a mixture of parts. Usually retired out of service British guns with have not only original proof and inspector marks before issue but also facing broad arrow decommissioning marks at retirement. Then again it could have been disposed of as surplus then converted to percussion by a third party- who knows? The lock plate does appear to be originally for a flint lock as you stated with the frizzen/spring and pan holes still showing. The hammer (and possibly the internal lock mechanism) obviously was changed to percussion. But the barrel with nipple snail has the look of original percussion... so hard to say for certain the exact history without research based on having the piece in hand.
Last edited: Sep 11, 2022
“… yousa in big doo doo dis time” – R Tarpals
You must log in or register to reply here.

Cannons and ???? Having fun with black powder