Hope this is posted in proper forum. When adding weight to a rifle stock, should the weight be evenly divided between butt and fore stock? Where is the optimum balance point on a rifle? I'm asking these questions because I want to add about 24oz total to a 458 win mag that I am currently playing with. Thanks for any info, or recommendations.
A

I would think a 458 would be barrel heavy, so added weight in the stock should balance out well. Look into mercury recoil reducer
V

Why is it that you want to make the rifle heavier?

There is absolutey no way in this world can give you an answer on the internet as to where to put the weights to balance the weapon for you.

I guess i'm not making myself very clear. I know what i'm trying to ask, just phrasing it wrong perhaps. If a rifle is considered "well balanced" where is the centre (balance point) on it? Is it just in front of the trigger or is it farther out in front? I realize balance means different things to different people, just trying to get an idea of where to start.
As to the why, the rifle currently weighs 8# and I would prefer 9+/-.
V

So I guess that you want to heavy it up to help mitigate recoil ?

for what it's worth, I had a Win M70 Supergrade rebarreled last year as part of a conversion to 404 Jeffery. The barrel is 23.5 inches and a #5 contour Kreiger barrel. The balance point of the rifle is at about the point of the floor plate hinge. Seems about right to me.

I put a Mercury Recoil Reducer in my 458 buttstock and it did make a noticeable difference. Of course, they wouldn't ship the recoil reducer to California, So I had to have it shipped to my son, then to me, lol. "hazardous materials"

On a heavier recoiling rifle, a little barrel bias can slow barrel rise in recoil and help with recoil PERCEPTION, but too much barrel bias can slow the start and stop of a swing to get onto a moving target.
Neutral balance is what the early Brits meant by the weight between the hands so think about your hand placement on the rifle and the mid point will give you neutral balance so start the weight addition trial an inch or two ahead of this point. As sugested tape weights under the forestock till you are happy with the results and then you can inlet and epoxy them into the barrel channel (if that is where you find the comfort point). You may find you need to add some to the barrel channel and some to the butt stock to customise it for your own particular preference and needs.
Von Gruff - website www.vongruffknives.com - email vongruff@gmail.com
My African Knives: https://www.africahunting.com/threads/my-african-knives.26296/
AfricaHunting.com Hunting Knives: https://www.africahunting.com/threads/africahunting-com-hunting-knives.40515/
The Von Gruff JT Ranger Knife: https://www.africahunting.com/threads/the-von-gruff-jt-ranger-knife.42359/
B

from personal experience, it is pretty hard to get enough lead into a hunting rifle forend to make a huge difference.
my 9.3x64 has the whole barrel channel enlarged such that a sheet of roofing lead is epoxied in to replace the wood.
this did not make a huge difference.
you can get more into the butt, but at the cost of making the gun muzzle light..
bruce.
B

Earle, go with what VG says above and you won't go far wrong. VG explains it well, it must also feel comfortable to yourself.
Just as a side thought and just my personal view, I prefer light rifles for hunting. Every ounce added to a rifle at the end of the day after a long tramp feels like an extra pound. I've hunted a lot up in Northern Australia chasing Buffalo, carting the likes such as .404's, .500NE and one of my favorites a scoped .338 WM, they all felt pretty damn heavy at the end of the day, especially the .500 double. Nowaday's I just carry an open sighted .303 Lee Speed up North, and a 6.5x53R Steyr made by W J Jeffery down south on the red deer, because both of them are super light and don't fatigue me as much as the larger bores after a long hike. If I was to make another large bore for myself it would be a .416 Taylor on a standard length action and as light as possible without being silly, and only just because of me having to cart it around so much. My rifles are carried more than shot, although sometimes it just feels like I'm just on an armed bush walk.
So what I'm really trying to say is if you hunt a lot with your .458WM and carry it long distances be aware of how much weight you will have to carry, and you really don't feel the recoil that much when you are actually hyped up and taking a shot on a big critter. If you are shooting on the range a lot then a bit of weight will be your best friend if fitted properly.
E

Thanks you all . Von Gruff in particular was able to decipher my rather poor explanation of what I was asking. Should have the rifle early next week and first order of business will be a trip to the range. If i'm really lucky the use of my Past shoulder pad may be enough and no weight will be needed. I do get lucky every now and then. Thank you all again.

As far as testing the rifle goes Earl, make a standing rest of some sort to mitigate the recoil factor as much as possible for your testing. Even if you put a stool on your shooting bench to get the needed height for your front rest and the tripod to steady the rear of the rifle you will get the same steadyness as a sitting bench shot to test the rifle and ammo without the enhanced recoil that sitting at a standard bench brings with the heavy recoilers. Shooting in the field is rarely a problem if testing is not a painfull exerience
Von Gruff - website www.vongruffknives.com - email vongruff@gmail.com
My African Knives: https://www.africahunting.com/threads/my-african-knives.26296/
AfricaHunting.com Hunting Knives: https://www.africahunting.com/threads/africahunting-com-hunting-knives.40515/
The Von Gruff JT Ranger Knife: https://www.africahunting.com/threads/the-von-gruff-jt-ranger-knife.42359/
E

Thanks for the tip, Von Gruff. I'm in the process of making a set of stix. Bought some 1" hardwood dowels 6' long and just waiting to get some range time to iron out any wrinkles in them.
H

Desert Dog said:
I put a Mercury Recoil Reducer in my 458 buttstock and it did make a noticeable difference. Of course, they wouldn't ship the recoil reducer to California, So I had to have it shipped to my son, then to me, lol. "hazardous materials"
Click to expand...

+ 1 , Desert Dog. I have Mercury Recoil Reducers put on my .375 HH Magnum Winchester Model 70. Does make a difference 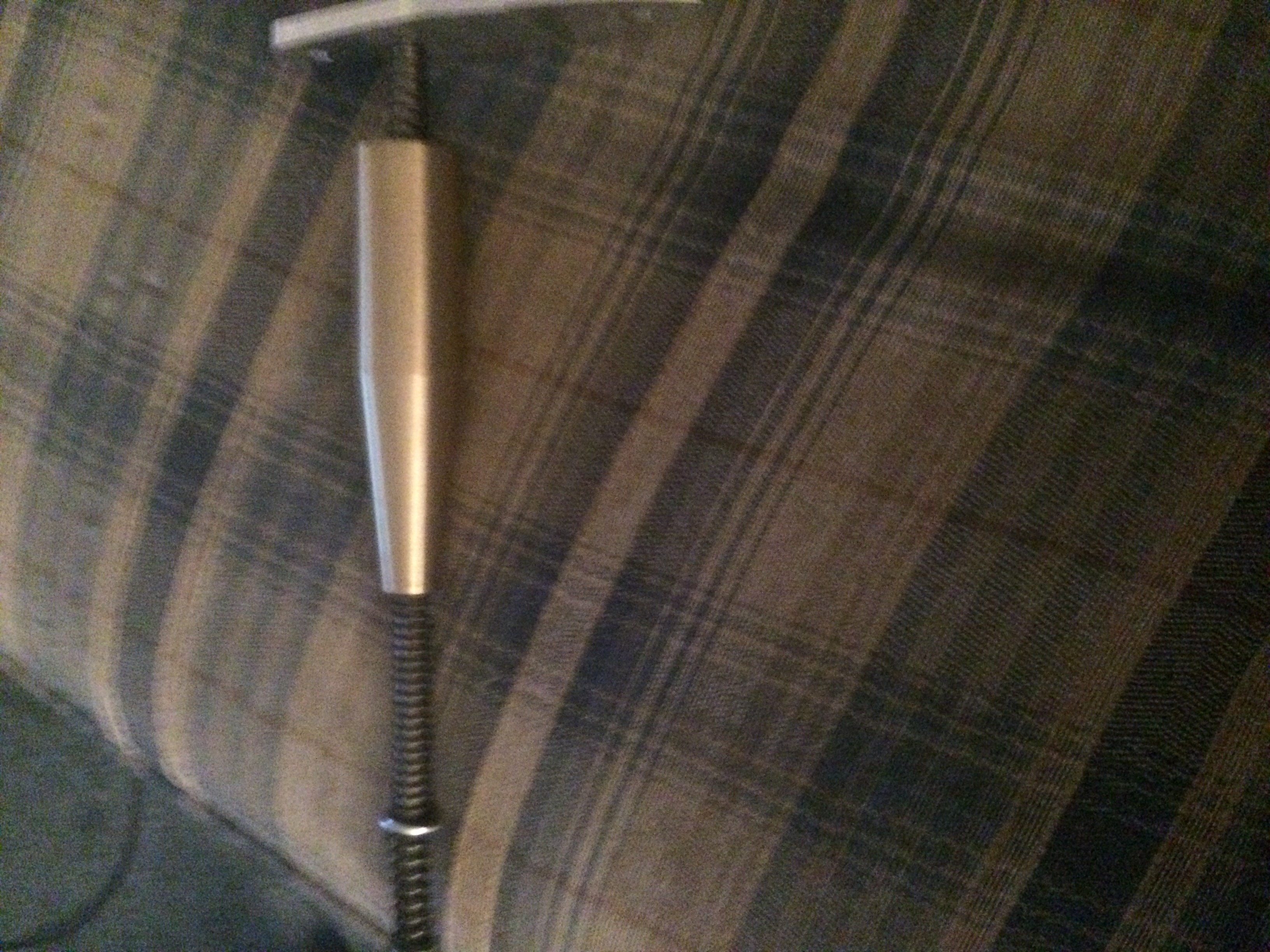 My 375 Ruger weighs about 6 and 1/2 pounds without scope or ammunition it was not a killer with recoil but with the plastic stock it was extremely muzzle heavy I made a 1 pound weight that uses the screw holes for the butt pad to anchor it in place and a slip on butt pad. My original plan was to get a piece of wood for the stock and ditch the plastic but when I shoot this rifle it can make clover leaf at 100 yards on a regular basis when I do my part.
I’m not going to fix what isn’t broken.
This did lessen recoil quite a bit but also just made the rifle feel better in my hands.
VG has it right tape weight on move it around till you like the feel then start to make it permanent.
Shawn

Remember that a smaller amount of weight further from balance point will do as much as larger weight closer so you can balance without adding to much weight.
Shawn
You must log in or register to reply here.

I
Building A Dangerous Game Rifle