I joined the 404 Jeffery Club today

For the last couple of years, anyone that's a regular on this site knows there has been a lot of positive comments and chatter on the 404 Jeffery. To be fair, that same statement can be made for..........pick a caliber. However, the 404 seemed to have a special place in African history and fills the spot in my gun battery for something bigger than my 375.

As many of you know, the two popular ways of achieving 404 nirvana is the CZ-550 or find a Winchester Model 70, preferably in one of the RUM cartridges, and have it re-barreled and a little other tweaking from a gunsmith.

I sent several PMs to other AH members, getting their opinions and input. In late January, I found a Win Mod 70 Super Grade in 300 RUM on Gunbroker. It had a reasonable "Buy Now" price on it, so I hit that button and about a week later I was holding a very nice rifle. The Super Grades do have nice wood! 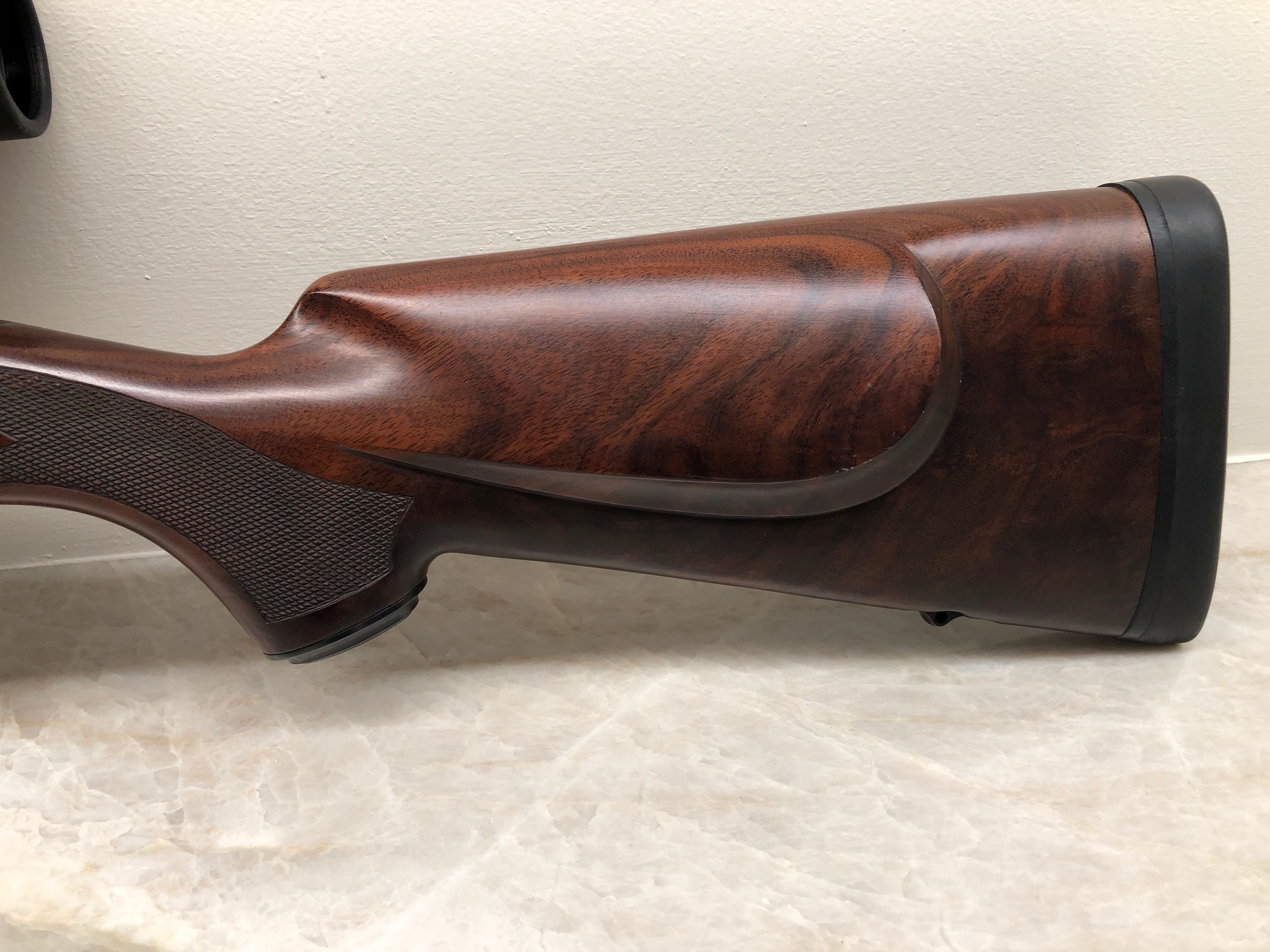 My initial plan was to send the gun off to Hill Country Rifle. They advertise a $1500 accurizing package deal to rebarrel, bedding, trigger, etc. I called them up and they told me they didn't do 404 conversions any more, citing the difficulty of getting a 100% reliable DG gun. Okay, so moved onto plan B as soon as I figured out what exactly plan B was.

I called Wayne at AHR and he too declined, citing his CZ work took priority. I talked to 2-3 other GS and they were either reluctant to take the project on or extremely expensive.

I then gave Dennis Olson in Plains, MT a call. I first learned about Dennis in a RealGuns.com article on coverting a CZ 550 FS in 9.3 to 375 Ruger. I had saved that article and doing a Google search on Dennis learned that he had a well earned reputation for being a very good, full service gunsmith.

I shipped the gun to Dennis in early February. These were the details:

Contact info for Dennis Olson. His wife, Glenda, handles most to the email communication.


Next thing, I ordered a barrel from Krieger and they would ship it direct to Dennis. I was told it would be about a 6 month delivery and it ended up being 8 month.

I also ordered some Tally QR bases and rings in 30 mm and also a box of 404 ammo (400 gr Swift A Frames) and sent them directly to Dennis. The ammo is needed for checking the feeding and also to test fire once all the work is done. Once Dennis received the barrel from Krieger, he had the rifle done in about 2 months. The box of ammo was returned with the rifle and there were four fired cartridges in the box.

While waiting the bulk of 2018, I started thinking about the scope for this rifle. I have Leupolds on most of my rifles, but I came across a good deal, here on AH, with another member selling a Swarovski PH 1.5 x 6 x 42 scope for a good price. When I received the scope, it was in the original box and looked brand new. The scope has the #4 reticle, so it's an ideal scope for this rifle.

Today, I mounted and bore sighted the scope and took a few photos. I hope to get it to the range on Wednesday and report back. For now, enjoy a few photos. BTW, once the scope was on, the rifle weighed in at a little over 10 lbs. It balanced (unloaded) at the hinge of the floor plate. 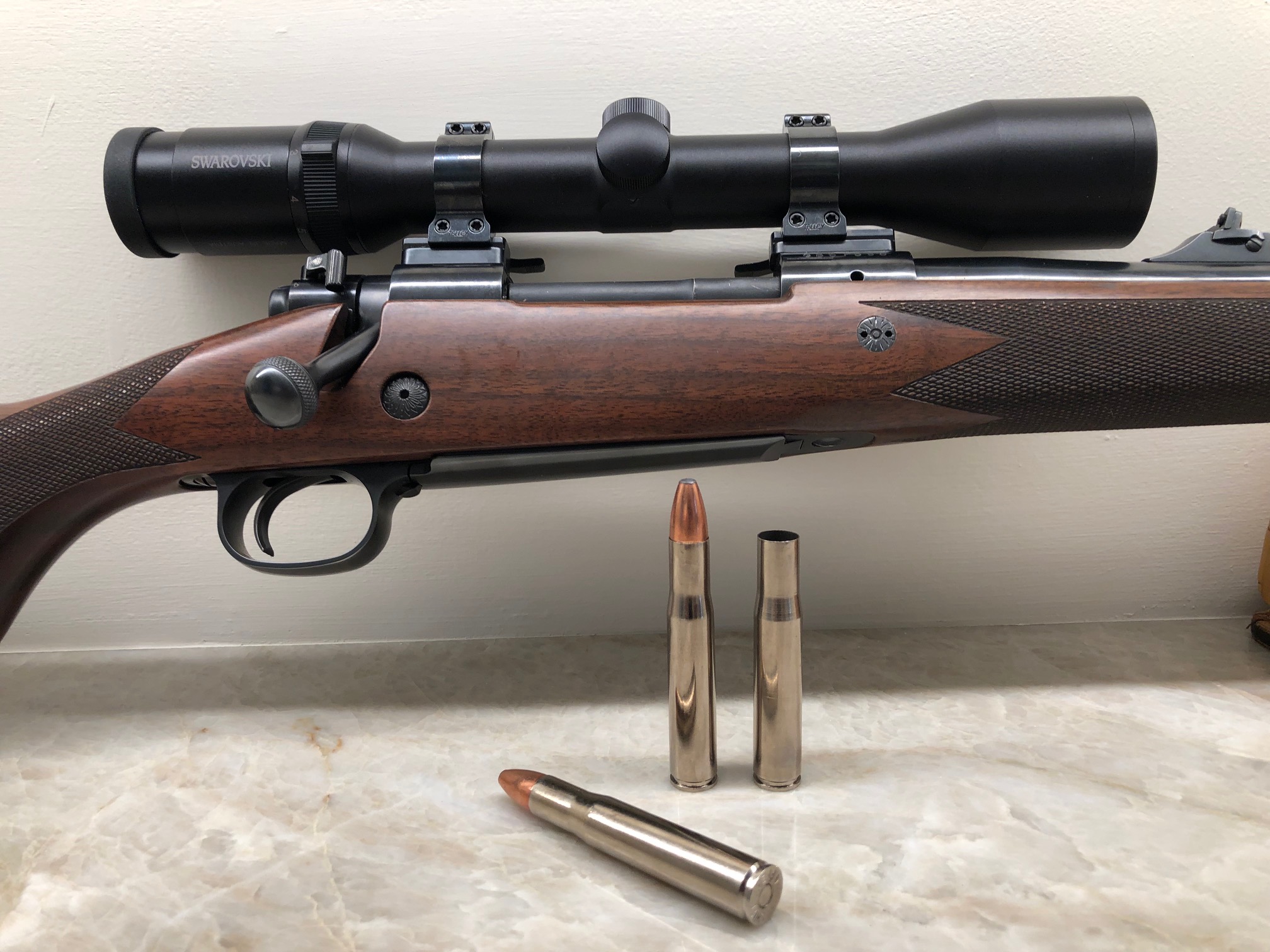 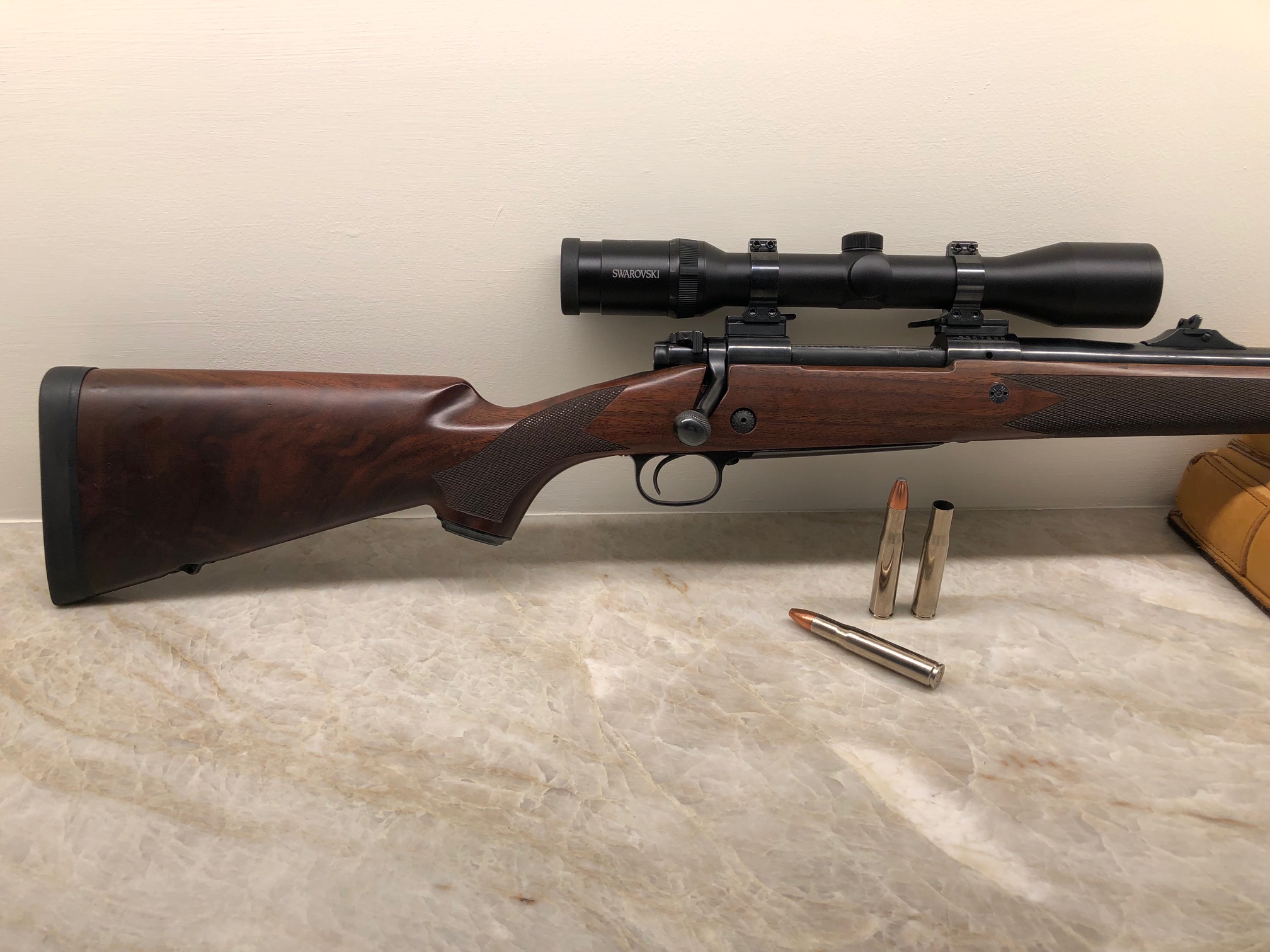 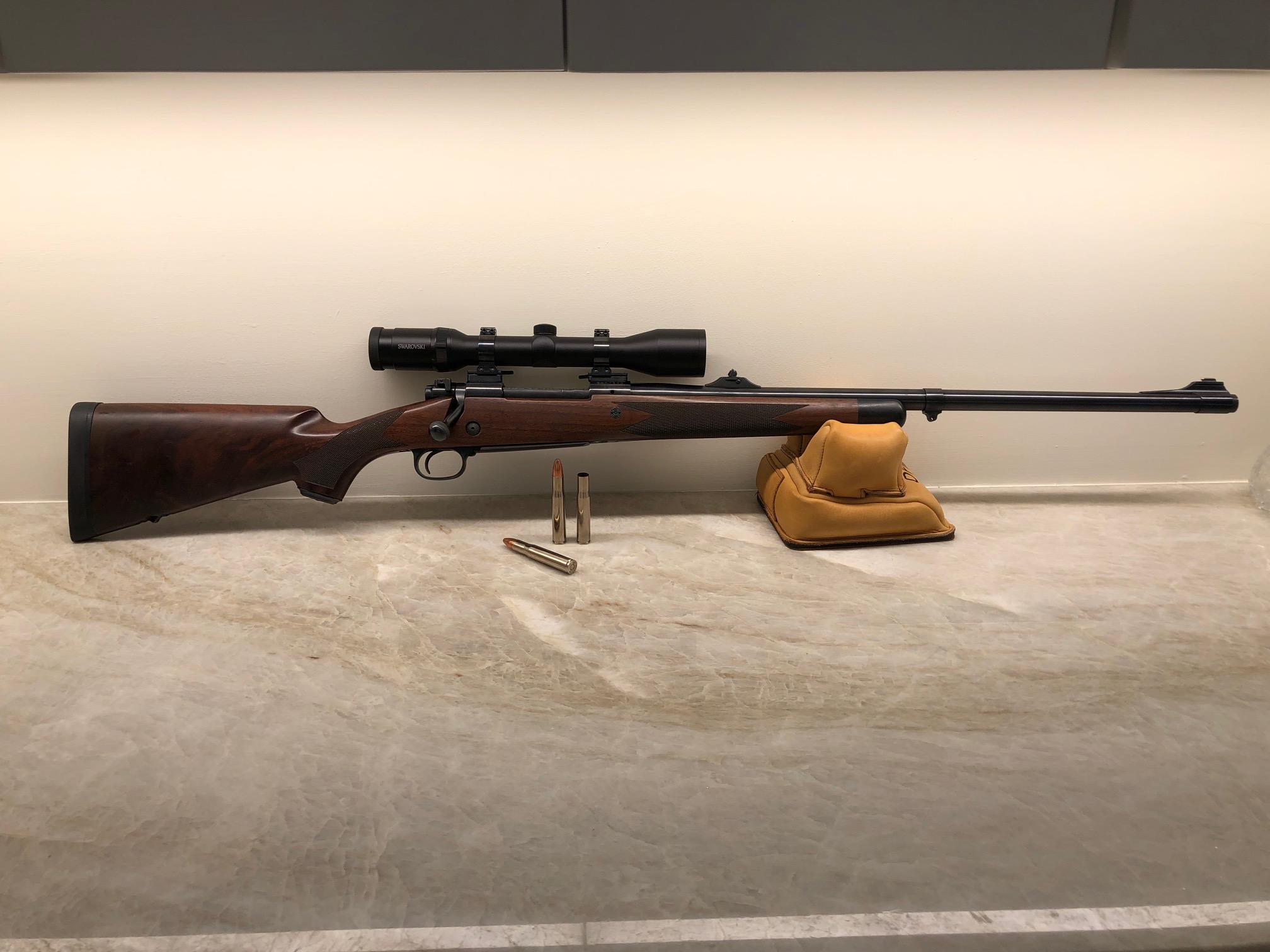 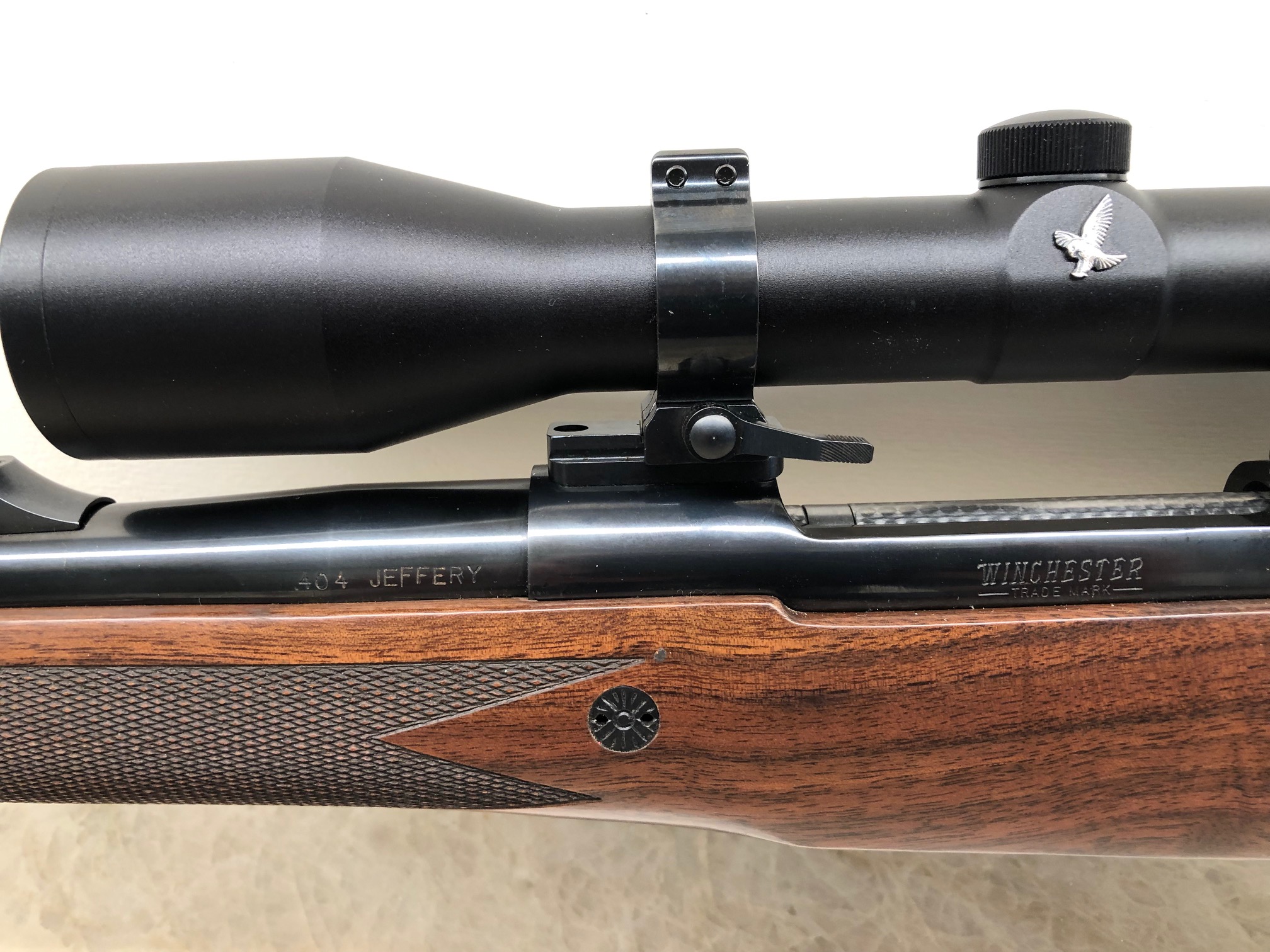 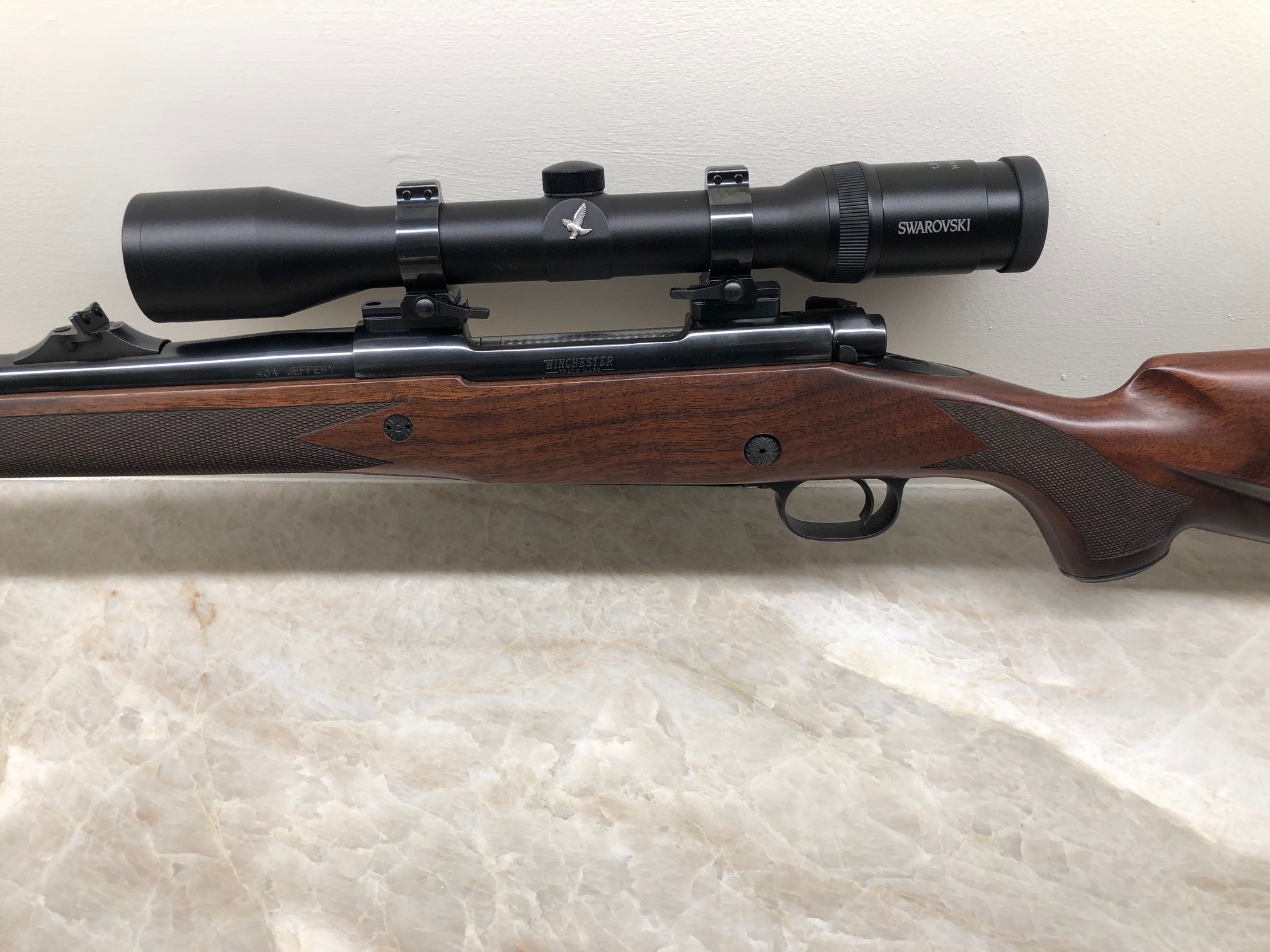 Excellent trophy firearm! You did the 404 Jeffery justice! What a handsome rifle!
Africa on my mind.

Looks amazing!! Congrats on having it home!
John 3:16

That is a real beauty. Have you tried cycling any ammo through it yet? I too have a German # 4 reticle in the Nikon Monarch 3 scope on my CZ in 404 Jeffery and love it. I zeroed my scope for 100 yards although that seems to me to be a bit far for DG. For DG I was thinking more like 75 yards since most DG is taken at distances less than that. Can't wait to see the range results. Be sure to bore sight that bad boy at 25 yds. the old fashioned way, i.e. pull the bolt and sight through the bore and carefully align the scope. Remember not to put too much weight on that lead sled. Good Luck!!!

Great rifle in legendary caliber.
Welcome to the club.

Congratulations! My guess is if you decide to sell it in the future, it will be gon......e! Mine is a converted RSM and is zeroed an inch high at 100. That puts it dead on from 50 to 150 yards with 400 gr Barnes TXS bullets. as advised to me by @Red Leg . My first animal with it was a buffalo at 90 meters. She ran 30 meters and rolled over dead.

Very nice! And a great glass.
"We sleep soundly in our beds because rough men stand ready in the night to visit violence on those who would do us harm" American Novelist - W. Churchill

This came out great!!
"Your imagination is your preview of life’s coming attractions." ~ Albert Einstein

Welcome to the Club
Be Yourself Everyone Else Is Taken

Congratulations on a beautiful build.
Let us know how it shoots.
“They that can give up essential liberty to obtain a little temporary safety deserve neither liberty nor safety.” Benjamin Franklin 1759 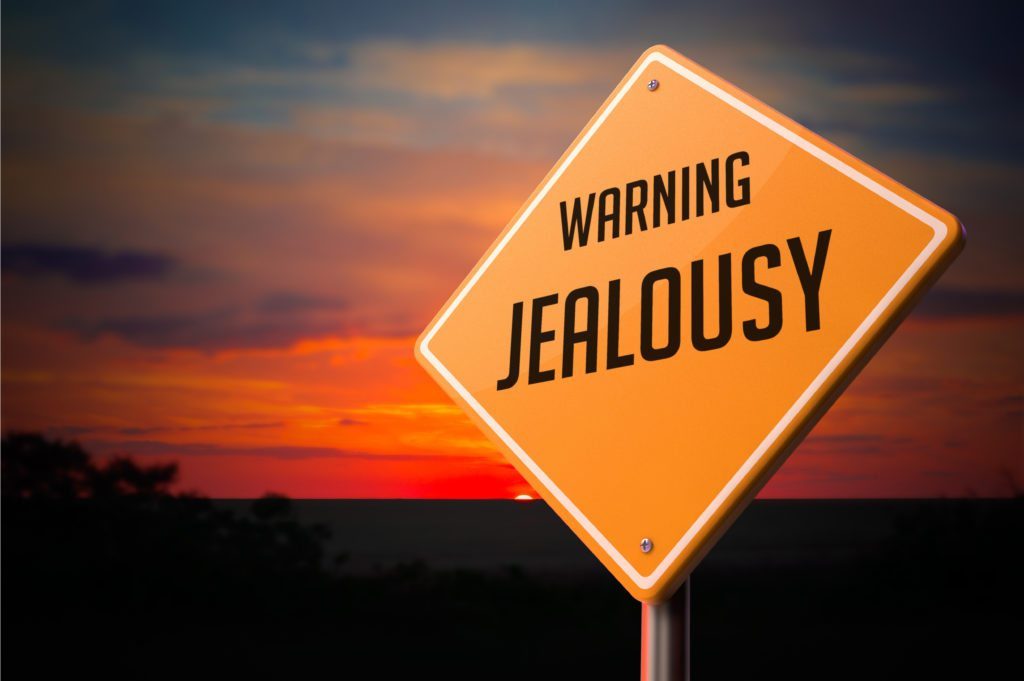 Very nice rifle you won’t regret building it.
When reloading try for about 2300fps for a nice all round load..
If you find them try the 450gr woodleigh softs they shoot well in my pacnor barrel 404.
Rodney A McCartney

@Bullthrower338 , @375 Ruger Fan and @tarbe will be on range 2Y, standing shoulder to shoulder, slinging no telling how many 400 and 500gr bullets down range, into imaginary Cape Buffalo.

Nice rifle! As Cody likes to say, I look forward to inappropriately touching it!
Captain of the Luddite Society

Enjoy!
You must log in or register to reply here.