I was winded from the climb and weak from pure adrenalin rushing through my veins. I steadied myself as much as possible with the shifting wind, and squeezed.

Last summer my husband Rocky, my daughter Laura, and I ventured to South Africa’s Eastern Cape to complete my Big Five. I’d hunted lion on our 2004 Mozambique safari, but to no avail. Then at the 2006 SCI convention Tommy Morrison of Sporting International introduced us to Irvin Tam of Tam Safaris. I’d heard so many negative issues surrounding lion hunting in South Africa that I was skeptical about hunting lion there. Assured that their concession was recognized by SCI as a fair-chase lion hunt and my trophy would be eligible for the Trophy Record Book, we booked a safari to hunt lion and lioness with a bow, and to dart a white rhino. Many hunters don’t realize that a growing number of female lions are on quota in Africa for conservation purposes. And, as taxidermists, we wanted to hunt both male and female lions to mount in a diorama for our trophy room.

Our goal for the first day was for me to take a bait with my Mathews Switchback bow to set up in front of the bow blind for a lion feast. Shuuuunk! My arrow went right through – a clean and perfect shot. Down it went and we were off to bait a lion.

The second day, that afternoon, my PH Peter Tam, Rocky, Laura and I sat in the blind to await a lion. I was close to an opening where I could pull back and release in a comfortable position, with the others behind me. That day with Peter was the beginning of a friendship with our family that will never die.

A few days later, while having lunch, Irvin and his son Stephen left to scout the mountains and check to see if the bait had been hit. We were just finishing up when Irvin came over the radio excitedly saying that half the bait was missing and fresh saliva was still dripping off the hindquarter.

Five of us and the tracker piled into two Land Cruisers to drive to where Irvin had spotted a lioness, full as a tick, resting under an acacia tree about 250 yards away from him. Rocky could barely contain his excitement. The circumstances for his cat were too dangerous for a bow. There was no cover to pull back into and get a good shot without a possible charge, so my .300 Weatherby Blazer was the weapon of choice.

As Rocky and Peter stalked the lioness, we stayed back by the trucks, constantly watching for lions. With a fresh bait right beside us, a lion could be as close as the nearest bush, and we would never see it. We heard a shot, then another. While waiting for an OK to come see Rocky's trophy, we just listened. Then the radio crackled. They had their trophy - a beautiful big female! Stephen had videoed the hunt so that even though we’d missed it, we could enjoy it all together later. 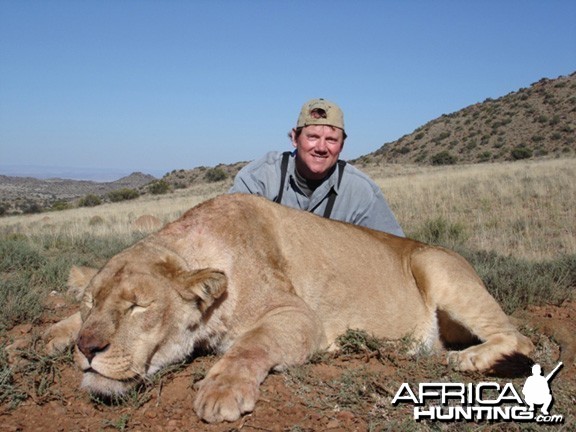 Rocky and Dian Cooper wanted to collect both male and female lions in order to demonstrate their full beauty as a species in a diaroma in their trophy room. "Also, many hunters don't realize that a growing number of female lions are on quota for conservation purposes."

I can’t remember how late everyone stayed up that night celebrating and plain enjoying each other's company.

The next day after lunch, Irvin radioed in that he’d spotted the black-maned lion he’d been looking for in the area of the bait. After that first night in the bow blind, Peter had sensed that I really didn’t like the idea of the whole thing, and asked me how I felt. I told him that I wanted the hardest, most dangerous and challenging lion hunt available with him. We decided we would hunt on foot; the bow was put on hold.

We quickly loaded up, and off we went to find Irvin. By the time we got there, the lion had moved. Irvin could not see him in his binos any longer and said he must have gone over the top of the mountain. So off we went towards the mountain, but he could not be spotted anywhere. Peter concluded he must still be at the top and had not gone down the other side.

We gathered everything we needed for the hunt and began our journey up the mountain while the Tam’s cook, Henriette, and Laura stayed in the truck. I am here to tell you that I loved it! It was exciting to know that a lion could be anywhere on these mountains. Making our way up the boulders, we finally reached the top. Just over the ridge, my soon-to-be-trophy lion was lying under a very small bush. You could just see his profile as he was gazing out over the plains. I had seen photos, TV shows and paintings like this, but had never experienced this beautiful beast so close in the flesh - so majestic, head held proudly.

There was a slight hesitance in my soul that almost stopped me from the hunt at that point. It's the part of me that is in awe of beautiful creatures, and the honour and respect that I have for them. But then the hunter inside me takes over and the thrill of the hunt is flamed. Then there is no stopping my desire to achieve the goal that I came all the way across the ocean to achieve: complete my Big Five.

"Can you see him, Di-anne? Peter whispered in his Afrikaans accent.

"Just wait, he’ll get up and start to move again any minute. He’s just resting," Peter assured me.

I was set up on a three-legged shooting stick. The wind was so intense that I couldn’t keep my balance as it swirled around me. We were at the very top of the mountain with nothing to break the wind. My crosshairs shifted up, then down, then side to side. This was going to be a miracle if I even held still enough to take a shot.

"There. There, Di-anne, there he stands. Can you get a shot?" said Peter excitedly.

"I can’t stand still. I’m being blown all over the place. You and Rocky get on each side of me as a windbreak."

By the time I felt comfortable enough to squeeze off a shot, the lion had turned his body and his rear end was in my scope. Then he began to walk, and the next minute was gone. I told Peter I just was not comfortable taking the shot. "It's OK, come, hurry." So off we went down the mountain and up another. This took time - we couldn't hope to cross an area that a lion can cover in minutes. Also, we really didn’t know exactly where he’d gone, and proceeded very cautiously.

When we topped the second mountain, Peter spotted our quarry on a third mountain, again resting under a bush. He was at least 350-plus yards away. Peter said that if I didn’t take this shot, if the cat got up again, we would never be able to catch up with him. Same scenario with the wind, but this time the lion was twice as far away. Plus, I was winded from the climb and weak from pure adrenalin rushing through my veins. I steadied myself as much as possible with the shifting wind, and squeezed.

My shot hit him, but low in his back leg. Another shot - right over his back. Then, finally, a perfect shot. And a last one to finish him so he did not suffer. This was the hardest thing I’d ever done at this point in my hunting career, and the longest shot I’d ever taken.

I had my lion and couldn’t believe it. It all was like a dream. I walked up to him, and my heart was full. 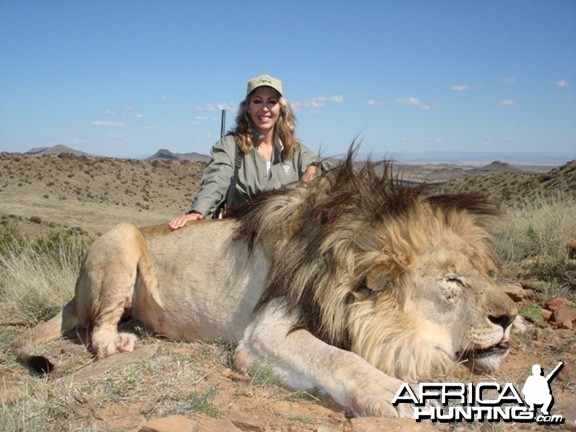 From afar, Dian observed her lion gazing out over the plains. "I had seen photos, TV shows and paintings, but never experienced this beautiful beast so close in the flesh."

The next evening was the biggest surprise Rocky and I have ever experienced. The Tam family had arranged for some neighbours to join us for a big celebration to honour our successful lion hunts. We had a grand banquet - and then came the dancers. Like a king and queen we were escorted to thrones and carried high in the air to the courtyard, set down, and entertained with African songs and dances. We laughed and danced and sang as well, and then some more. Having my daughter and husband together on one of my dreams come true was a memory to cherish. I will never forget this hunt. Never!

Dian and Rocky's daughter, Laura Hopkins, with her first African trophy - a mountain reedbuck. "I am now the proud mother of an upcoming Huntress of the Year."

Dian Cooper, co-owner of the taxidermy Brush County Studios in Houston, Texas, also darted her rhino on this trip. And Laura took her first trophy - a mountain reedbuck. “I am now the proud mother of an upcoming Huntress of the Year.” Dian has been hunting for more than 20 years and has collected over 50 species on three continents. She has completed her Big Five (plus two leopards). “My main love is hunting in Africa.”
Last edited by a moderator: Dec 1, 2016
You must log in or register to reply here.

A
Lady Of The Night Huntress Diana South Africa

A
Lady of the Night, Huntress Diana South Africa