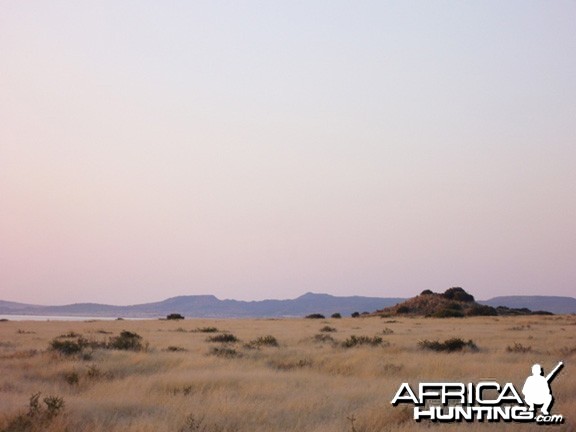 Although the Great Karoo is one of the driest regions in South Africa - as well as freezing in winter and burning hot in summer - it is home to substantial numbers of game specifically adapted to this harsh environment.

The bull stood behind a large cow, and as I waited for him to get clear, Ren whispered in my ear that the range was 231 metres according to the rangefinder. Slowly the cow turned around, and as she stepped clear, the bull presented a perfect broadside shot. I closed the bolt and stuck the crosshairs low on his chest.

For many of us, when we think of South Africa’s Great Karoo region, words like ‘barren,’ ‘harsh’ and ‘dry’ immediately spring to mind. Although one of the driest regions in Southern Africa, only exceeded by true deserts like the Namib and Kalahari, it nevertheless holds substantial numbers of game specially adapted to make a living in its harsh environment, which includes night-time temperatures well below freezing during winter, and day-time ones so hot during summer that you can fry an egg on your 4x4’s bonnet, if you are so inclined.

On the plains can be found the remnants of the millions upon millions of springbok that once roamed this area; although not as numerous today as during the early 1890s, they still number into the thousands in some areas. Many other species also call the Karoo home; wherever springbok is present, the blesbok can ususally also be found, as can the red hartebeest, black wildebeest, Burchell’s zebra, Cape eland, and a handful of semi-desert dwelling kudu here and there. Mountain reedbuck, Vaal rhebok and klipspringer are found in the region’s rocky outcrops, and if you look closely you will even find the odd leopard prowling among the rocks. But my vote for the region’s most impressive game animal must go to the gemsbok.

I have always been fascinated by the gemsbok. Rumoured, in some exceptionally dry areas, to go without a single sip of water for its full lifespan, it has a fiery temperament to match that of the roan and sable, and is quite capable of inflicting fatal wounds on man and predator alike with a single flick of its rapier-like horns. During earlier times I often hunted on a game ranch near Messina in South Africa that held a good population of gemsbok, and often when hunting impala or kudu I would encounter a herd of gemsbok, looking strangely out of place among the shrub mopane that made up most of the area’s vegetation. However, I only got my first crack at hunting one of these fascinating animals in 2006. 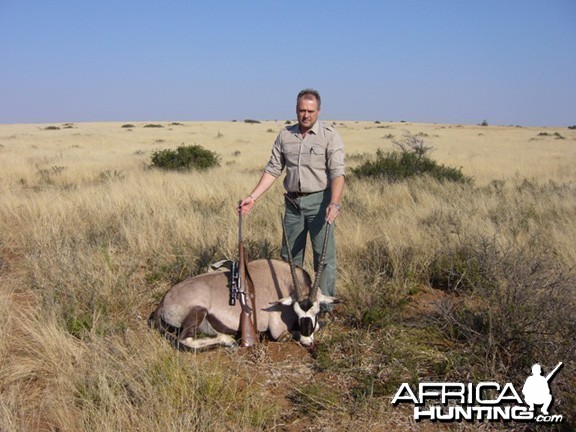 We were lucky enough to draw a hunting package in the Oviston Nature Reserve in South Africa’s Eastern Cape Province. Situated along the banks of Lake !Xariep (not a misspelling, although it is still called the Gariep Dam on most maps), Oviston spans an area totalling nearly 16,000 hectares made up mostly of typical Karoo grasslands and rocky outcrops. It is home to most of the antelope species found in the Karoo. Considering that 2,000 springbok and 400 blesbok need to be culled annually to ensure that the reserve’s carrying capacity is not exceeded, gives an idea of the quantity of game living within its fences.

The reserve also holds numerous gemsbok, and each member of our hunting party of three had permission to hunt a bull. I was heartened by encountering the first one, a lone old bull bathing in the late-afternoon sunlight on a ridge, before even reaching the old farmhouse called Komweer Lodge (meaning, in Afrikaans, ‘Come Again’) that served as accommodation for visiting hunters.

We were up before the crack of dawn on the first morning, and as we stepped out of the kitchen, the crisp coldness of a beautiful Karoo morning slapped us on the cheeks and banished the last vestiges of sleep. Although it wasn’t my first hunt of the season, I was literally trembling with excitement to be out in the field again.

When I was dropped off with my guide shortly after sunrise, it was so cold that my fingers were numb in spite of my gloves. My old .30-06’s barrel was freezing to the touch and the breeze cut through us. We encountered the first herd of about 20 gemsbok not long afterwards, and I spied a huge bull in their midst, a beautiful animal with exceptionally long and wide-spread horns. They led us on a merry chase across the plains, and more than once I rested my rifle on one of the many termite heaps in the area in the hope of getting a shot, only to watch the herd canter out of range. 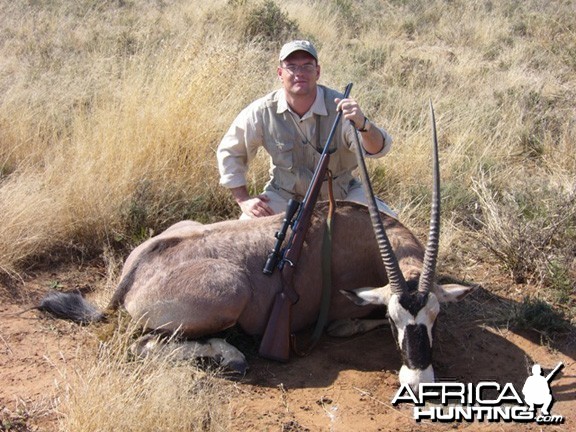 Van Wyk waited for a gemsbok cow to clear his bull before taking his shot at 231 metres. He had waited almost 20 years to take the 'desert aristocrat' - this one with 38-inch horns.

As we spooked them for the fourth time they kept going. As they slowly dissappeared over a ridge in the far distance, a shot rang out, followed by the thud of a bullet striking flesh. Ren Lubbinge had cut across the path of the fleeing herd and managed to get into a shooting position from about 300 metres away without the herd sensing his presence. The result was a beautiful young gemsbok bull, killed cleanly with a single bullet to the lungs; although it wasn’t exactly a trophy animal, the thought of its succulent fillets made up for the fact that we’d missed the big fellow.

In spite of walking nearly five kilometres in very trying conditions, with long grass and loose soil all the way, I was glad that I wasn’t the first to shoot. It was such a beautiful morning that I didn’t want the hunt to end so early. As soon as the first bull was loaded on the trailer we set off in search of another herd. We drove some distance to another area where the terrain changed from gently rolling grassland to steep and rocky, making walking extremely diffcult. But it wasn’t long before we encountered a new herd, and my binoculars showed a nice bull bringing up the rear. The hunt was on again! 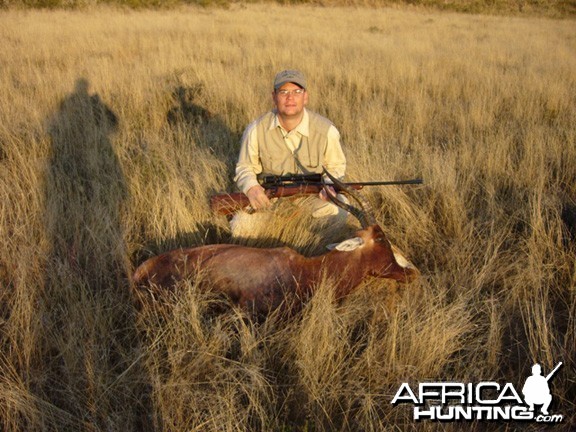 During the hunt to South Africa's Great Karoo region, an area reputed to be dry, harsh and barren, van Wyk collected this 'one-shot' blesbok.

We would ‘push’ the herd in the Land Cruiser, jumping out every now and then if the opportunity of a shot arose. This happened a few times, and I was amazed at how effortlessly the animals managed to climb the steep slopes along the edge of the lake. Eventually the terrain smoothed out some, and we all sensed that this was it: The herd had been pushed far enough and this was where they were going to make their last stand.

I found a nice rest for my rifle and tried to get my breathing under control. It was about midday and the coats of the animals shimmered in the bright sunlight. The bull stood behind a large cow, and as I waited for him to get clear, Ren whispered in my ear that the range was 231 metres according to the rangefinder. Slowly the cow turned around, and as she stepped clear, the bull presented a perfect broadside shot. I closed the bolt and stuck the crosshairs low on his chest.

As the rifle recoiled I heard the sound of the bullet striking home – just in time to see the bull stagger under the impact of the 165-grain Remington Core-Lokt. The bull valiantly attempted to follow the herd as they took off, but he was hit hard and managed only a few paces before his legs slowly gave in under him and he sank into the yellow grass.

As I came up to him it was clear the animal was stone dead. The bullet had taken him squarely in the heart and ensured a quick, clean kill. The bull had remained upright in his last moments as if propped up for a trophy photograph. In spite of the fact that the bullet had exploded like a hand grenade and caused extensive internal damage to the chest cavity, and knocked a chunk as big as a golf ball out of its heart, not a drop of blood could be seen on him as he lay there at my feet. He was simply gorgeous – all I could have hoped for. I felt a lump in my throat as I stood next to the ‘desert aristocrat’ – one of the handsomest animals and with 38-inch horns – I’d been privileged to hunt. He will have pride of place in my home for years to come – a reminder of fine companionship, a beautiful place, and a noble animal. Almost 20 years after I had first admired gemsbok in the Northern Transvaal bush, I had finally satisfied my curiosity. 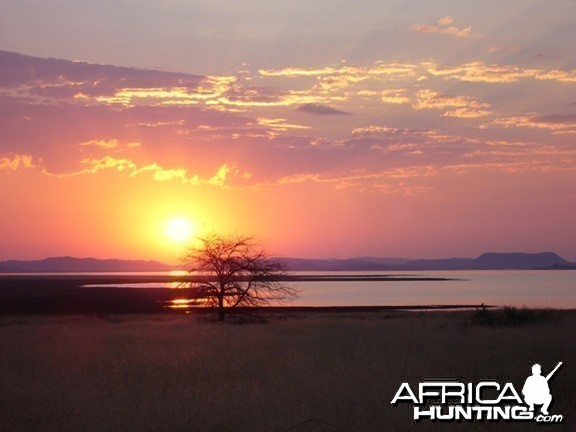 Sunset over Lake !Xariep - otherwise called the Gariep Dam on most maps of South Africa.

That afternoon we celebrated with a few drams of Mr John Walker’s Finest, and as the sun started to sink towards the horizon I walked to the edge of the lake to spend a few moments of quiet time. I sat down on a termite mound with a beautiful view and said a silent prayer of thanks for the gemsbok and for being in such a beautiful place. The silence was wonderful. Even the birds didn’t want to disturb me as I pondered the end of a wonderful day in Africa.
Last edited by a moderator: Dec 1, 2016
African Hunting Gazette
You must log in or register to reply here.

The King of the Kalahari

Silence in The Selous
2