As promised my first report, hunting small cats and more...

It all started when my Friend and booking agent from Sweden, Stefan Bengston, asked me if I could do the Small guys and Hyena.
Janne, a good friend of his, and now me, have been to Africa 12 times, and never lucked out on any of them, other than a Caracal with Jeff Ford, in the East Cape, and a lesser spotted Genet in Zimbabwe. He was anxious to get one or 2 of them.

My reply was, we can always try but is your friend prepared to hunt hard ?, and why do we not try for all of them on his list.

I met Janne in Sweden to chat about the hunt, and instantly liked him. Janne is a game keeper for a large estate near Stockholm. I have never seen so many wild Boar on one place.

Janne arrived in Johannesburg on the 21st of Feb and we proceeded to our first destination on the Mpumalanga border with Freestate.
Here we were going to hunt for Serval with the help of Hounds.

Saturday night, the arrival day, we spend spotlighting, but had the Pack of Hounds with us in case we saw something. We spotted Silver Fox and Aardwolf, I did not have Licenses for any them, so we passed. At around 1:30 we spotted a suspicious eye, and off went the Hounds! Unfortunately a porcupine got in the way somehow, and the hunt was called off.

the next Morning, Sunday, around 5:30 am found us at a likely place with the Houndsmen, tracking a riverine area, but only cold tracks, the wind came up around 8am so we called it off and got some rest. 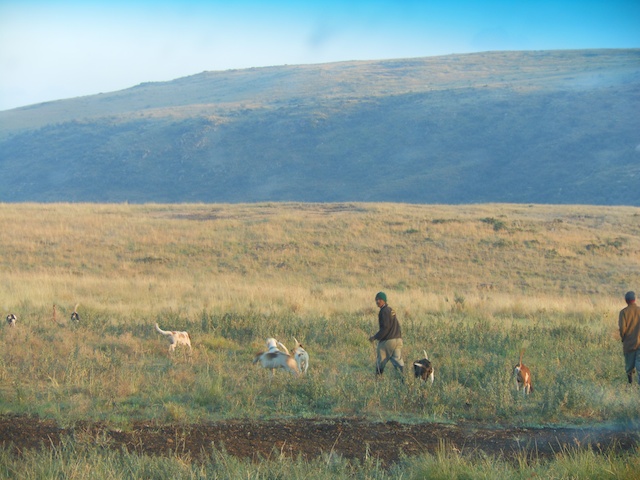 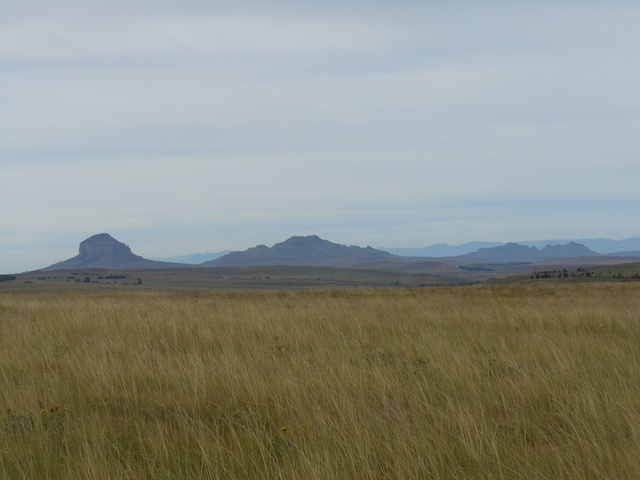 Sunday Night we tried spotlighting Potato fields for Porcupine, but once again a quiet night with lots of wind. This time we decided to rest the Hounds for the Monday Morning Hunt.

Monday 3:30 AM we were up and on our way with two packs of Hounds. The Dogs were well on their way with the Houndsmen at 5 am, and soon there was music in the air.
Both Packs had reasonable scent. 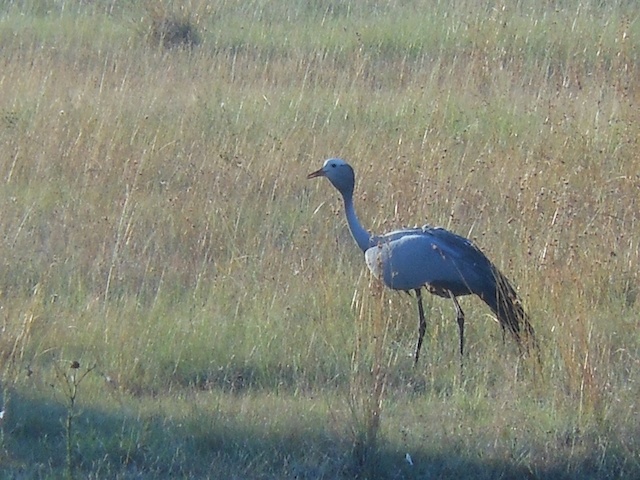 The chase lasted for quite a while until the cat found a cave, we moved in to see what was bayed, but all we could see were 2 porcupines. It seemed like the Cat had found refuge behind the Porcupines much deeper than the eye could reach, and the Hounds could not get any closer. In any case Porcupine was also on the menu

Janne got two of them from a distance of about 1 yard, after crawling into a very tight space. 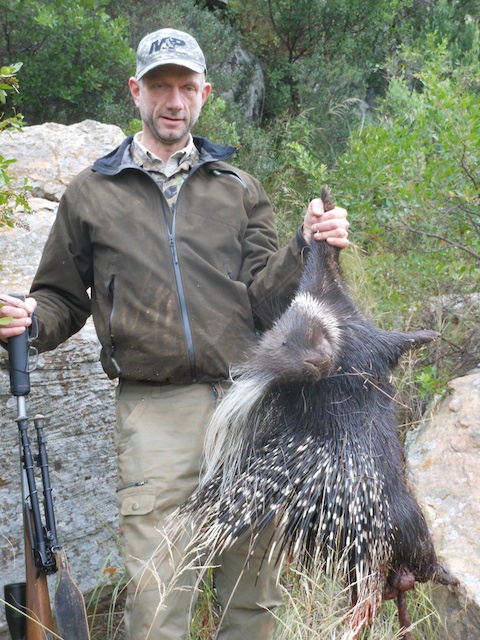 While we were still taking pictures a call came from the other Hounds man, to say that he had treed a good mature Serval. It was a scramble and quite a long run for us. 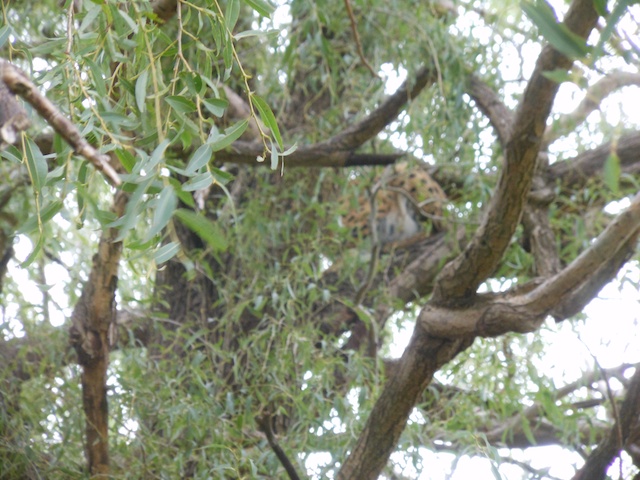 Janne made a good shot, and the Serval was his. A dream come true, you could see the gleam in his face. 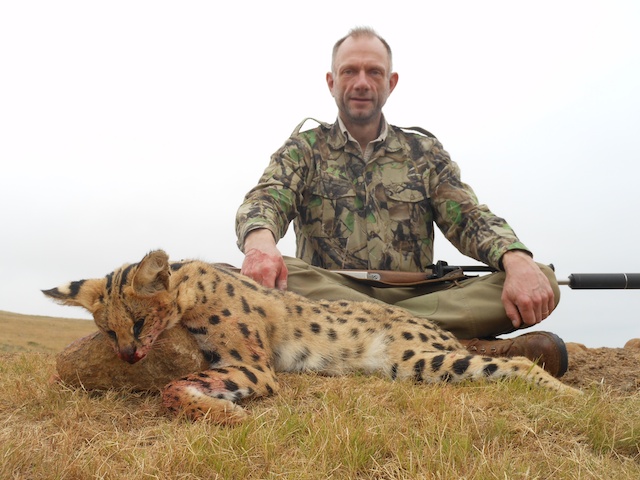 The time was about 10 am now and we were totally exhausted. The walk back to the Car was pleasant and the siesta that afternoon even better. 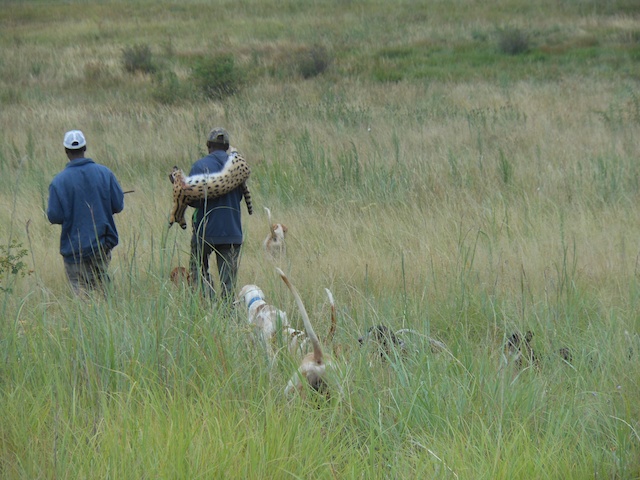 That night was spent again just spotlighting but with no interesting results.

Tuesday Morning we were off again at 4:30 to hunt some Jackal, just for fun and to see the Hounds work. They exterminated 3 in about 3 hours, we had to cut it short as I had a 4 hour drive to another of my Areas, in the Drakensberg, where we were hoping to get a chance at Civet.

We arrived at our Komati river camp just before Dark but got rained out, there was about 50 mm of rain in less than a hour.
Morning Breakfast and we were off to my Base camp in Limpopo, for Hyena and the rest!.

Shortly after arrival I took Janne and Elizabeth on a drive to familiarize them with the lie of the land, and do some game viewing. Had the good fortune to find some Buffalo. Also had a brief glimpse of a massive Leopard. 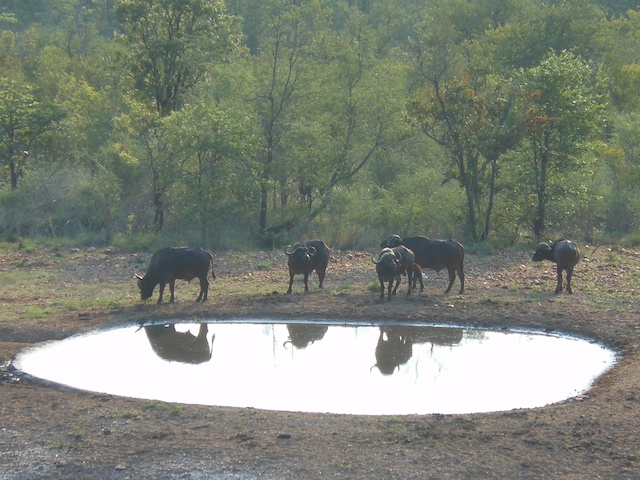 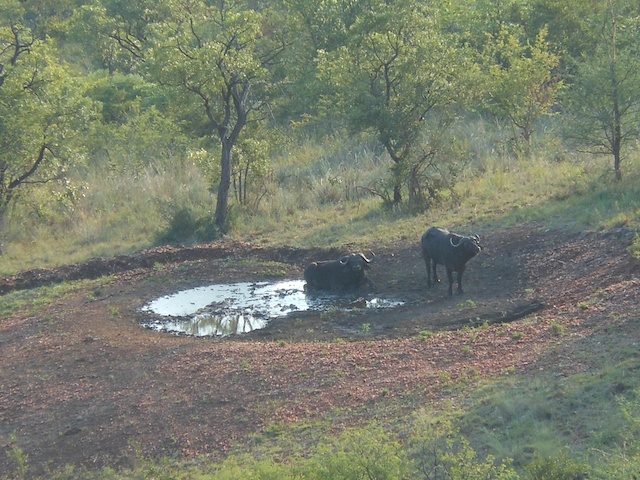 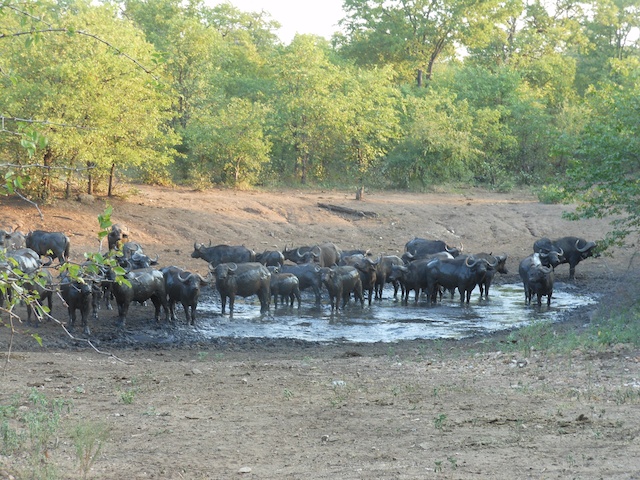 I had my Trackers scout before our arrival while we were chasing small cats in the Highvelt, so we knew where the Hyenas were moving, and where to start that night. We had a early dinner and by 8 Pm we were on our way with the open Land Cruiser, by 10Pm luck had struck. Janne was again in 7th heaven, he sat many nights for Hyena prior to this hunt to no avail. It is understandable once you have spend many cold nights out. 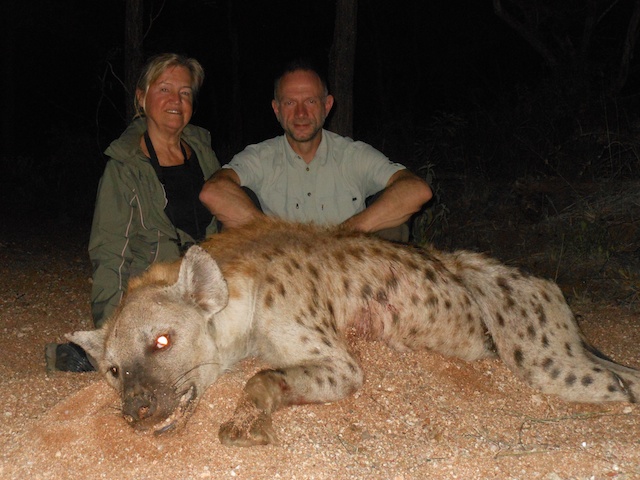 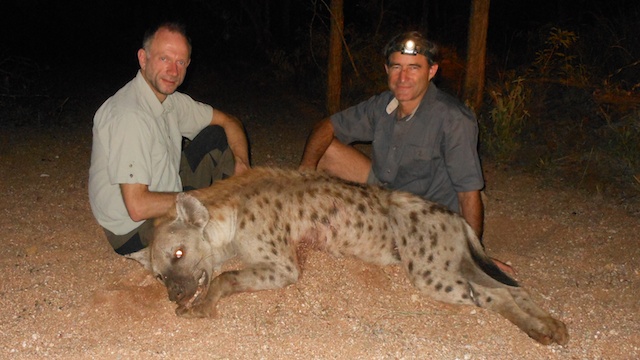 The Old hyena had many scars on her, there were old snare marks around her neck and Hips. You can also see a clear scar on the hind leg.

Now all that was left was the Civet. I had Trail cams out at various feeding spots but nothing regular was coming in. We could see lots of tracks everywhere though.
I started a new feeding spot where we saw regular tracks and hoped for the best by just driving around and around. At around 11Pm we found a Large spotted Genet, Janne had the other variety so we took this one. This was a bonus. 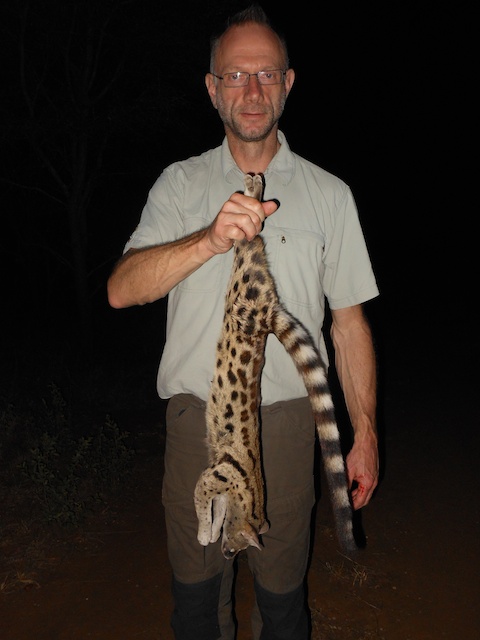 Something that was not really on the menu was a Klipspringer, we did discuss the option briefly, but now that we had such easy success, we decided to give it a try.
I parked the Truck quite some way away from where I had seen a particularly old ram and we set off.

At exactly the place where I had seen him before he jumped and ran up the rock face. Luck was on our side again and he stopped once more. As Usual Janne made a great shot and the old Man was his. 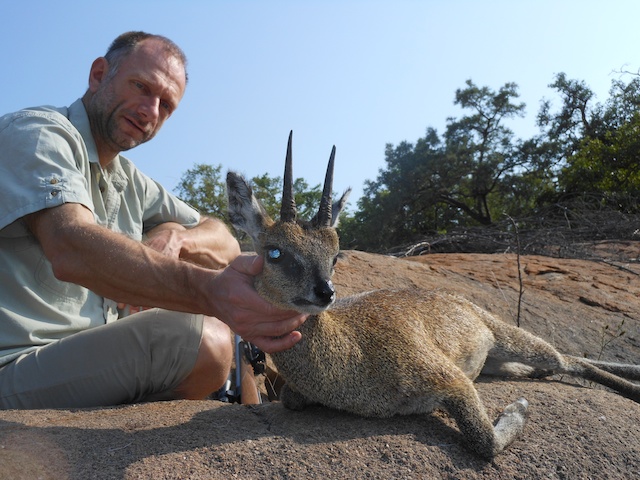 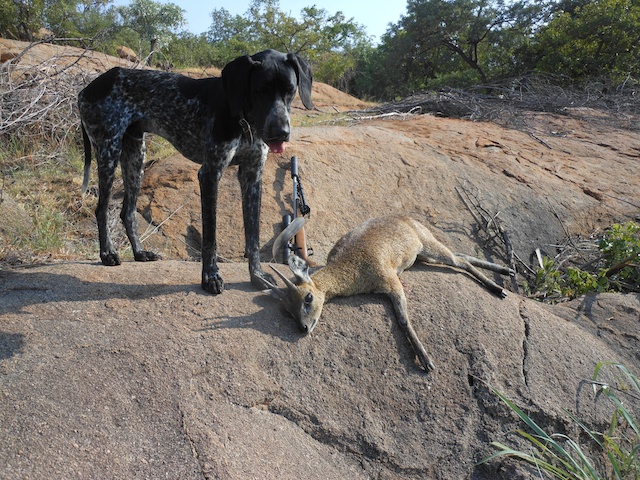 We just could not believe our good fortune but I suppose quality areas, with the right preparation and persistence pays off.

We still had our quest with the Civet, so early dinner and at 7 pm we were back at the bait sites. There were tracks all around the one.
Once again we drove around and around, periodically coming back to the Bait cites. Once we must have just missed one, as his tracks were over ours but he was gone.
At around 10Pm we lucked out again, there he was but moving. In all the excitement Janne made a "not so great shot" and off he went. I was pretty sure of a hit so decided to let my Pointer loose. He took the track surprisingly well for a Puppy, and we got another glimpse of the Wounded Civet, This time Janne made the shot count and our quest came to a satisfying end. 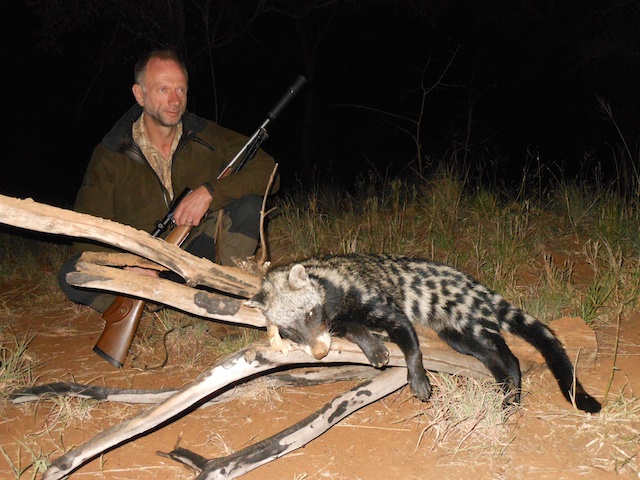 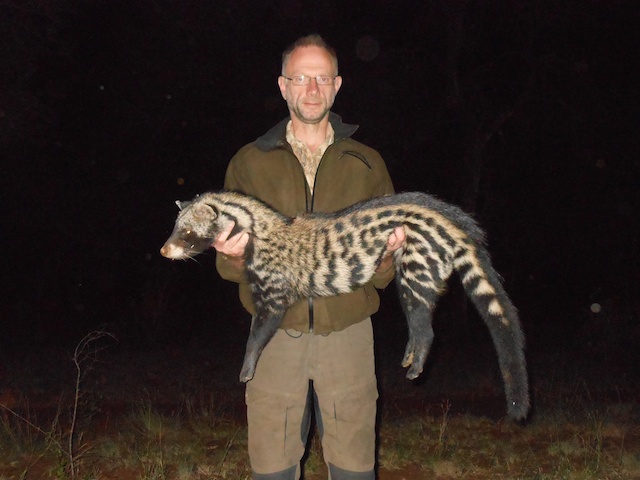 It was a great time with great people and memories that will last a lifetime.
Hopefully next year we can complete the tiny antelopes with Janne and Elizabeth from Sweden.

mate , that's a whole bunch of hard trophies , congratulations.
great report
have you ever bagged that array of trophies in one hunt before .
what calibre was janne using ?
thanks ofr writing this one up ernest !!!!
beat ten to one janne is one happy camper........
THE HUNTER; The person that pays over 90% of the cost for the presavation and maintance of wildlife and gets zero credit for it ................

Thanks for writing this up.
The pictures really show the size difference in these species.


That Hyena had been really lucky until you guys showed up. Plenty of narrow escapes.

That left handed Klippie is a neat trophy.

You do have to have a combination of luck and being prepared to pull this off.
Congratulations.

Congrats, these animals are not easy to hunt !

what a fantastic and different hunt!

I really want to get back to try for Hyena again. Didn't work out in Zim.
HUNTERS make importation bans work!

A really enjoyable post, and different from the usual hunting report. Thanks for posting it.

Very well done! I am jealous. These are not easy animals to get, as I know only too well.

Great hunt! An unbelievable amount of work goes into a safari this successful. Well done!

The Serval is a really cool trophy, but that Klipspringer that Janne got is top notch!

Great safari and the client can be really happy with the trophies he harvested. Not one off them are easy trophies to even get a shot on let alone have a full bag!

Congratulations Ernest on a job well done, I know what hard work and dedication goes in to having such a successful hunt on a tough wish list like that!

These are all great trophies that I have near the top of my list as well. Have been fortunate to score a great Caracal and spent a handful of cold dark nights sitting for Hyena with no luck. I will defnitely continue my quest for Hyena/Serval/Civet/Genet on my next trip too.
You must log in or register to reply here.

Hunting the small antelope in a big way