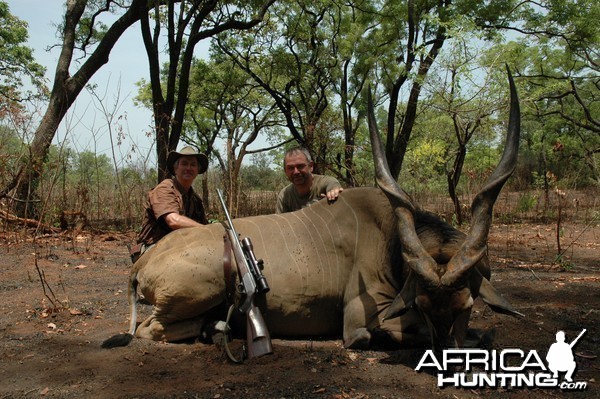 Every trophy room should reserve a special place for the Lord Derby eland. Weighing in at 2,000 pounds, standing 69 inches at the shoulder, carrying a distinguished thick black dewlap and "mane" and crowned by a majestic set of crew-like spiraling horns that can measure up to 56-inches SCI (48 inches straight up, Rowland Ward), it is the regal giant among its three Southern and East African cousins, Cape, Livingstone and Patterson elands.

If the sub-species Taurotragus Derbianus has almost disappeared from West Africa with only a remnant population in Senegal, the Central African Derby eland sub-species T. Gigas is still found in northern Cameroon, southern Chad and southwest Sudan; but the majority of the finest Derby eland trophies have always come- and still come-out of northern Central African Republic. 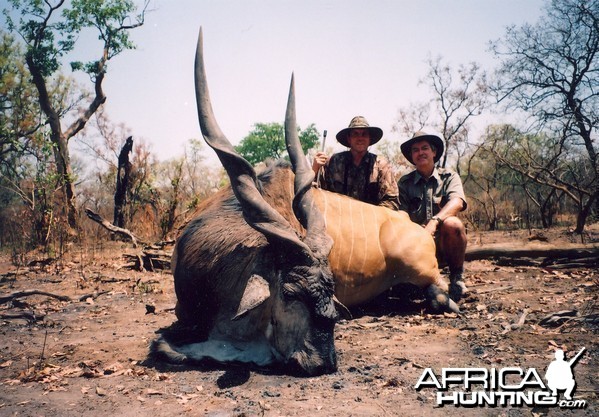 A top quality eland trophy is usually earned, and the hunt has a well-deserved reputation for its challenging and rewarding experience of tracking on foot, often in fairly rough terrain. Feeding mostly morning, evening, and at night (especially at full moon), unlike other species, eland hardly rest during the day's heat, and thus they can cover a lot of ground moving to salines or water.

But unlike smaller hunting concessions, throughout the entire safari season we can always locate several of the numerous resident herds in their mini-migration pattern. We find small mixed herbs of 12 to 25 animals, smaller bachelor herds of 3 to 5 males, solitary males. and occasionally herds of over 80. Hunting starts at dawn, picking up fresh tracks on trails crossed by eland, in saliness, or on isoberlinia-rich plateaus. 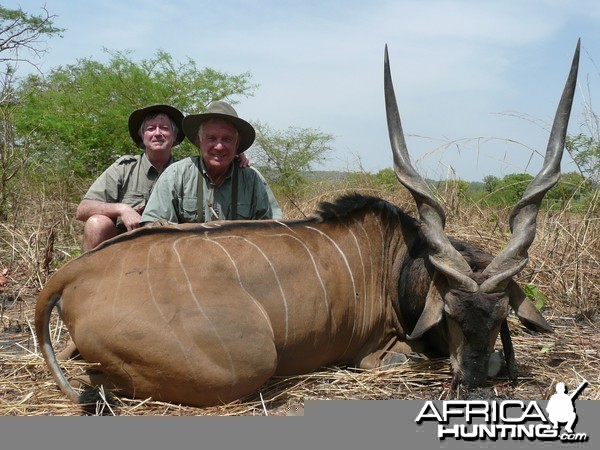 Enduring sweat flies, an increasingly hot sun, and the inevitable momentary apathy of a hunter unused to the demands of tracking, the several-hour advance the eland have on the hunter is finally conquered: A slow-moving line of handsomely-striped chestnut coats shimmers through the trees 60 yards ahead of the discrete, but heart-thumping little pack of armed homo sapiens

While scouting for the best trophy, it is absolutely vital to remain undetected by suspicious females who can in an instant, set the herd off in a fast trot, the confused male following her confident lead. Otherwise, the hunter loses precious time waiting for the herd's fantastic sense of smell, sight and hearing go off Red Alert. 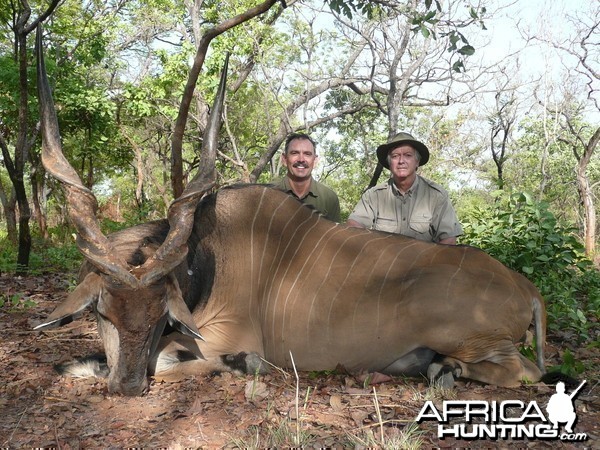 As Craig Boddington wrote, "The Derby eland is a strikingly handsome and impressive beast, and in sheer appearance I rate him second to none..."

But I remember my days on Derby eland tracks as being some of the longest hunting days in my career. On the plus side, it's real hunting in a very real and largely unchanged part of Africa. It is a prize well worth whatever effort he requires.
Last edited by a moderator: Dec 1, 2016

Thanks Rudy for sharing your knowledge with us!
Jerome Philippe, Founder of AfricaHunting.com

Fantastic description of the hunt and great pictures!

Awesome animals.....
You must log in or register to reply here.