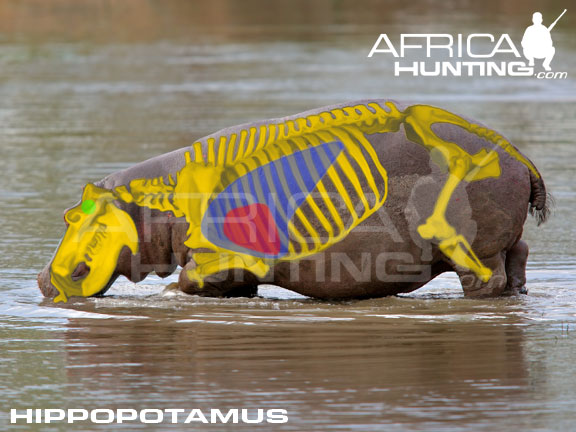 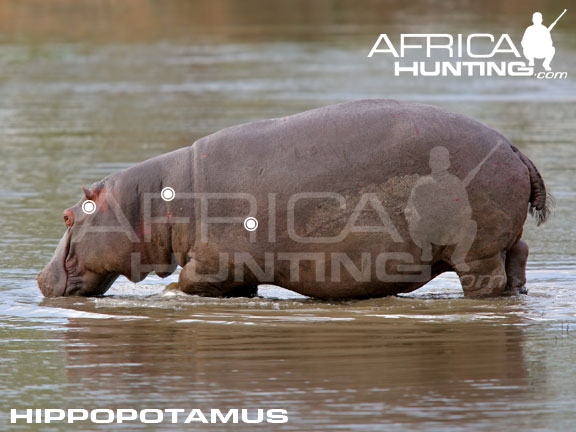 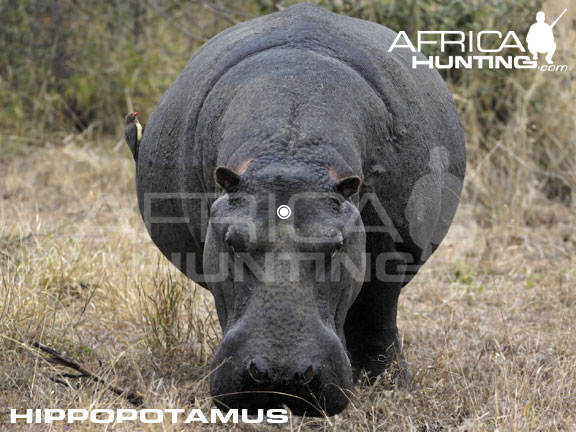 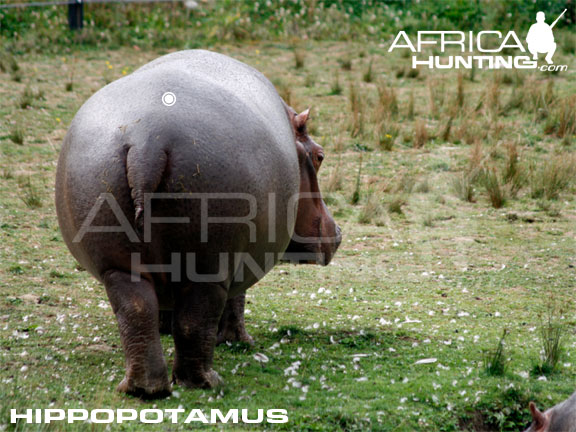 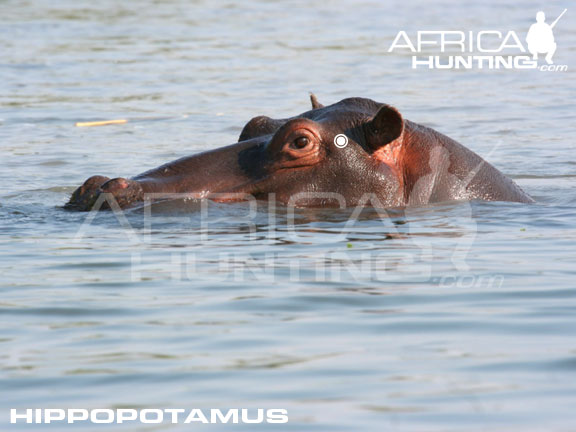 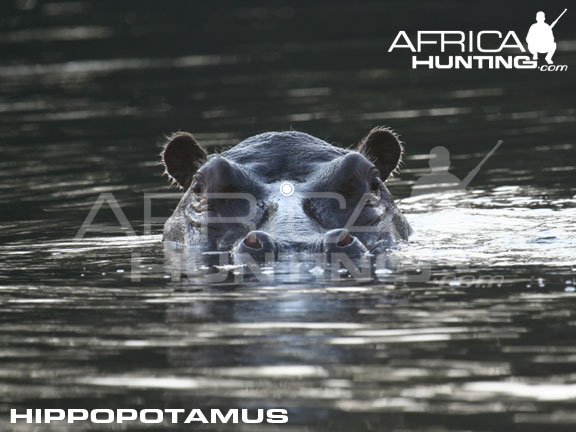 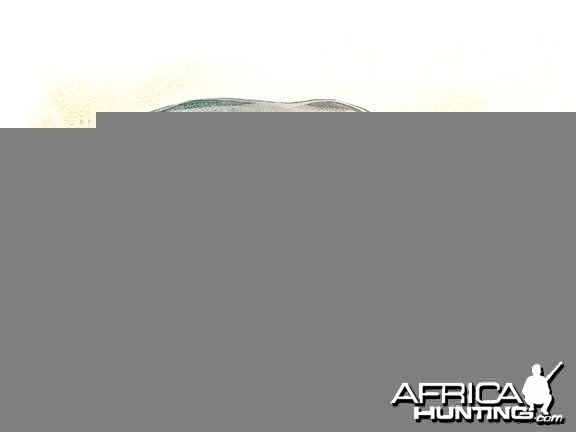 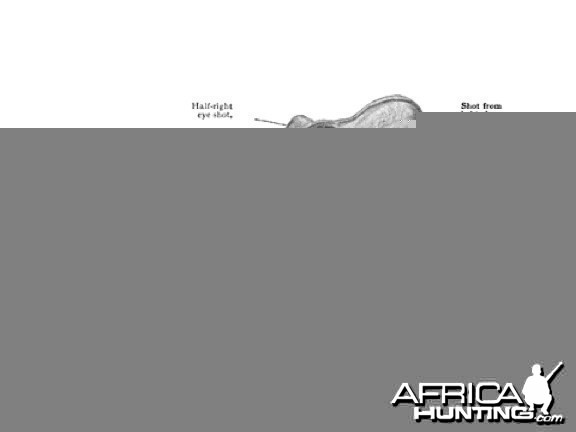 As this animal is generally found in water, shots at the head are almost the invariable rule. A hippo's brain is very small, and we have endeavoured to show a plain sketch of the skull showing its formation.
We think the most certain shot can be obtained when the animal is looking away, exposing the back of its head. The bullet should then be placed below an imaginary line drawn across the bases of the ears, low if anything, unless one is on a high bank and well above the animal.
If the bullet strikes the centre the spine will also probably be cut as well and splinters of bone driven into the brain cavity.
The next best shot when the animal is quarter facing would be the orifice of the eye, the bullet raking backwards. Brain shots all depend on the angle, and one must always have the position of the brain in mind, and endeavour to aim at an imaginary line which will pass through the middle of it.
Hippo are sometimes found standing on sandbanks, with part or all of their bodies visible, but this will seldom be noticed in the daytime, unless they are in a very secluded part; then it would be possible to take the body or neck shot, but none of these would be as satisfactory as the head one.
The direct facing shot is very difficult, for it would be no easy matter placing the bullet right in the nasal orifice so as to travel up it without touching the mass of bone surrounding it; but in the shots we have described the wall of the brain is the first bone encountered by the bullet. Of course, with modern rifles the penetration is so great that if one gets the true direction it matters less where one strikes; but, even with a "303 rifle, the bullet might possibly glance off the skull, though it is not so likely to do so as a lead bullet fired from a black powder rifle.
If a hippo sinks quietly after receiving the shot, he is almost always dead ; whereas, if he splashes, he is only wounded, and will in all probability not be brought to bag unless by a subsequent shot.
It is sometimes very difficult picking out the best male, but it will be noticed that they are broader about the head and darker than the cows and young. The shape of the head differs much as does a boar from a sow, the latter being narrower and not so broad across the forehead.
Once a herd has been located, never be in a hurry to fire, for there is plenty of time to decide which is the bull; but it is certainly sometimes difficult to see the teeth, for they are not still for long, and don't always expose enough of their heads to make one sure.
Once they have been fired at, they are rather shy, and do not stay up for long, and unless they are in a detached pool will probably make tracks for a safer neighbourhood.
The sportsman should try and wound as few as possible, for they are harmless beasts if unwounded.
There is no doubt that a wounded hippo will attack a passing canoe, but when unmolested they will invariably make way, and are good-natured animals.
Solid bullets should always be used for these animals, and there are no better weapons than the '303, "275, or '256. 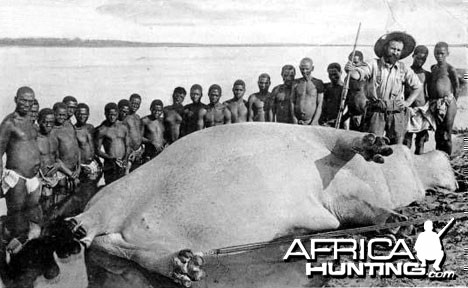 The question of vital shots is a most important one, for, after the game is sighted, it is necessary that the sportsman should know exactly where to hit it, so as to kill it quickly, saving the animal perhaps many days of suffering, and the hunter the time and trouble of following it up.
Nothing is more distressing to the man with humane sporting instincts than to feel that he has sent an animal off with a painful wound to die slowly, tormented by flies, maggots, and the nightly terror it will suffer from lions, hyaenas, jackals, or hunting dogs.
It would be well, then, to shoot coolly, and not to aim at an animal's whole body, but at the exact spot you wish to hit.
Never jerk the rifle off, but press the trigger gently, and, when possible, sit down. When this is impossible, if a tree is handy, rest the rifle against it, taking care to have the arm or hand between the barrel and tree to prevent jump.
It would, perhaps, be better to take the animals in order of size and the difficulty in killing them.
Last edited by a moderator: Dec 1, 2016
Jerome Philippe, Founder of AfricaHunting.com

Has anyone hunted hippo recently? I would appreciate hearing from you with thoughts!

Me too! I am going on a hippo hunt this July.
https://www.facebook.com/insanebowhunter/

I can't decide if I'm saving all this year to get a hippo, go to NZ, or just to see how much I can really pile up....these forums make the choices so difficult!

@mrpoindexter who are you hunting with?

CAustin said:
@mrpoindexter who are you hunting with?
Click to expand...

It wouldn't be Pawprint Safaris would it?

I have the hunt with Eland Safaris. I am bringing a friend who was going to hunt some PG and he wanted to accompany me on the hippo hunt. He even bought a dangerous game crossbow just in case. I was originally planning on bringing my kids along for an easy hunt, but my wife said no, so I decided to hunt dangerous game and let her know it would have been far cheaper to bring the kids and stick with plains game.
https://www.facebook.com/insanebowhunter/

mrpoindexter said:
I have the hunt with Eland Safaris. I am bringing a friend who was going to hunt some PG and he wanted to accompany me on the hippo hunt. He even bought a dangerous game crossbow just in case. I was originally planning on bringing my kids along for an easy hunt, but my wife said no, so I decided to hunt dangerous game and let her know it would have been far cheaper to bring the kids and stick with plains game.
Click to expand...

Hippo is a very under rated trophy. Its one of the greatest dangerous game animals to hunt. Very impressive, cunning, and makes a hell of a trophy. Defenately one of my high ranking favorites!

HeinrichH said:
Hippo is a very under rated trophy. Its one of the greatest dangerous game animals to hunt. Very impressive, cunning, and makes a hell of a trophy. Defenately one of my high ranking favorites!
Click to expand...

Yes I too will be hunting them in August. Would like any info/help.
Tommorow is promised to no one. Go live your dreams.
S

Never never never under estimate the speed of a hippo whether on land or water!!! I prefer a brain shot on a hippo, where on elephant I prefer engine room.

Interesting Simon they you prefer that shot on elephant. I doubt I'll have the time at night for a brain shot. I'm thinking it's going to be a body shot and quickly
Tommorow is promised to no one. Go live your dreams.

I'm hunting in the Caprivi in September of 2018 for Elephant and Hippo. The PH says to bring solids for both, with some softs for body shots.

Spooksar said:
I'm hunting in the Caprivi in September of 2018 for Elephant and Hippo. The PH says to bring solids for both, with some softs for body shots.
Click to expand...

My PH recommended only solids on hippo. I'll have Barnes solids with me and swift a frames also for the buffalo. At the range yesterday. Solids on the top and soft points on the bottom. Both will put the animal in the salt. 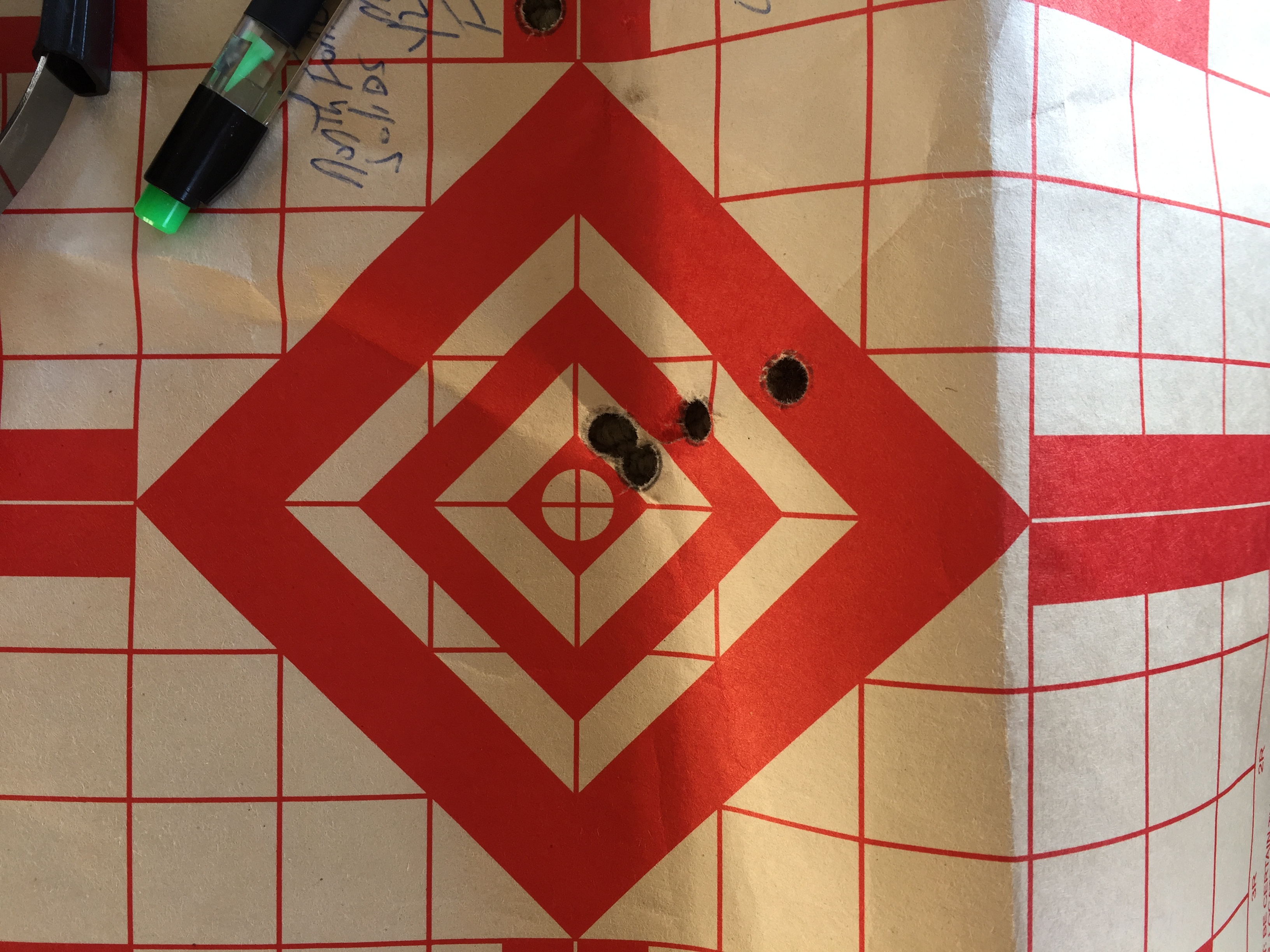 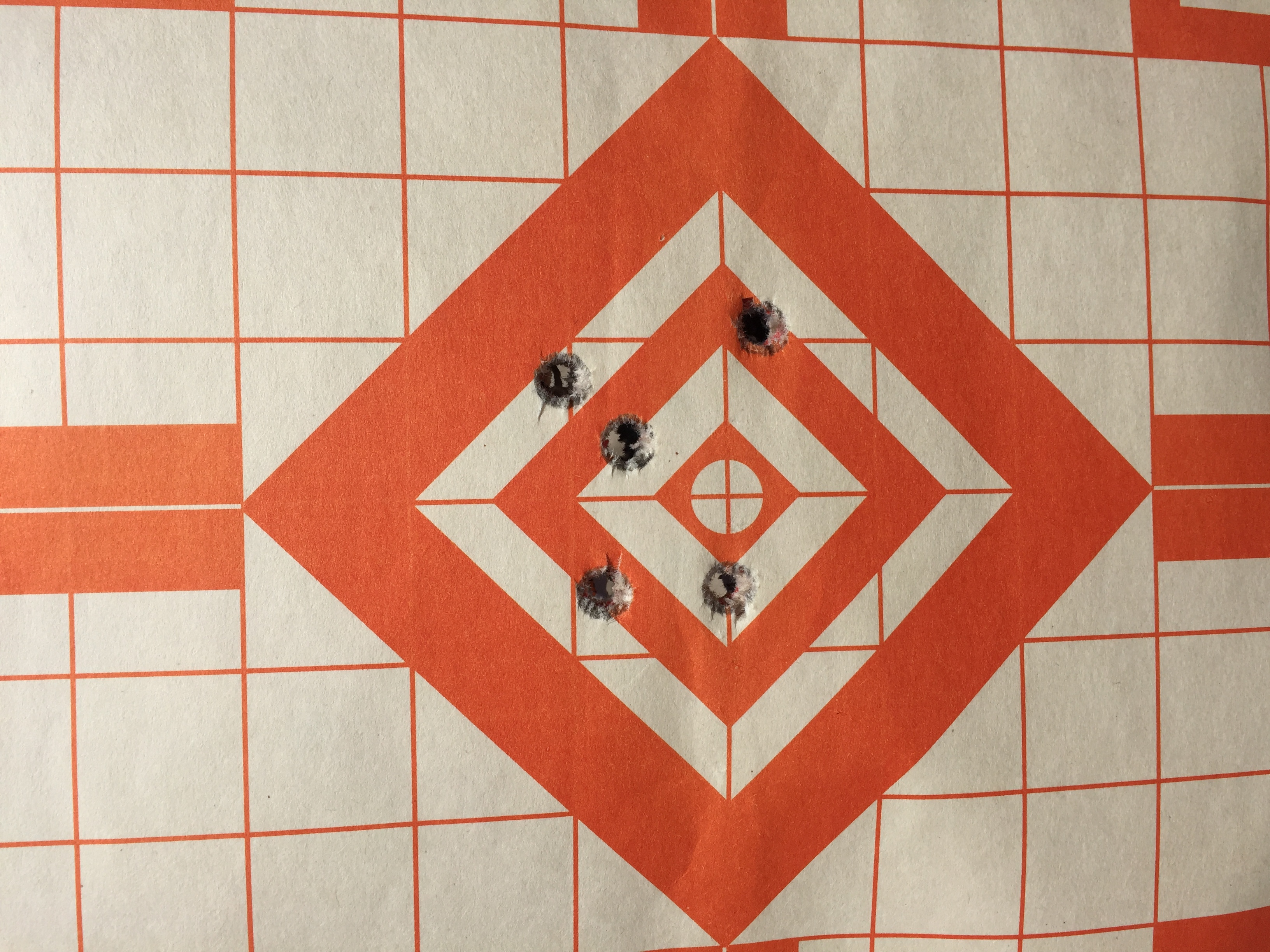 Last edited by a moderator: Apr 9, 2017
Tommorow is promised to no one. Go live your dreams.

Good practice @johnnyblues ?
You must log in or register to reply here.