You can shoot elephants behind the forelegs with an AK47 ( 7,65x39 ), also the .303 is used by poachers. But that is not ethical hunting. You can shoot like Bell with the 7x57, 173 gr at 2350 f/s if you are experienced like Bell to find the right spot for a side brain shot just in front of the ear hole. That is the weakest point of an elephant's skull. You should use like Bell a ladder to achieve the right angle and have a gun bearer with your big double for backup.

But being honest, today for sportive elephant hunting we want a cartridge which guarantees, using a head shot, a one shot kill under most circumstances, even on a charging animal. That means, the bullet has to penetrate and exit the head from all possible angles. For frontal shots sometimes a massive part of the trunk is also to penetrate. If an elephant is wounded and will disappear, you need also high penetration for the backup shot.

To achieve this properties, you should look for a modern FMJ bullet with a sectional density of .3 to .35, launched with a muzzle velocity around 2350 to 2400 f/s and use it on a distance around 20 m for a head shot. If you hit the brain, the caliber may be 9,3 mm, .375 and .416. If you go up to .458 or .510, you have a margin and a few inches miss will nevertheless bring down or kill the animal. The respective cartridges are hot loads of 9,3x64 and .375 H&H, the .416 Rigby and RemMag, .458 improved as Lott, Watts or Ackley, .460 and .500 A-square. There are many other cartridges giving the figures mentioned above, but also many which have myths around them and their use may end in fatal situations because of a lack in penetration. But reports on such events are normally not for the public. Already a 535 gr .510 bullet at 2350 f/s traveling diagonally from ear to eye is sticking in the elephant's head and not exiting. You have to use a rifle from this caliber group which you can handle without flinching. The diameter or surface area of the wound channel is only the second parameter to look at. If you want a bigger one, you have to go up with the caliber, e.g. 500 A-Square. But here we are coming to an end soon, because the older caliber in the .600 and .700 range have not sufficient penetration and the modern cartridges in this group, .577 Tyrannosaur or .584 Nyati give problems with handling and recoil to most of the hunters. The matter is different for smaller game, but as mentioned above, here we are discussing the hunt of dangerous game with the highest possible performance.

The dead elephant supplies meat for the locals. 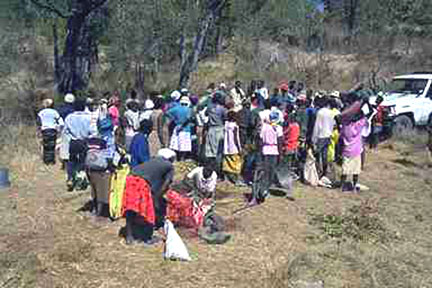 Not an advice for the beginner, but for the advanced hunter
- to follow and shoot a single elephant bull in most cases is without any problems, even to shoot a bull out of a group is not dangerous, after the shot the other animals disappear. But to shoot a bull close to a herd or a cow in a herd can cause charges from the other cows and the hunter should be aware of that.
- a brain shot at a distance around 20 yards is easier than a heart/lung shot at more than 50 yards.
- no discussion on shot placement, you can read about it everywhere. But penetration is often neglected and can vary a lot depending on the bullets path inside the animal. Not the caliber, not bullet mass, not kinetic energy counts, but look for a cartridge with the most penetration you can handle.
- very often the elephant is only stunned. A final heart/lung shot is obliged, preferably with a good soft point.
- a very personal opinion: when fighting a charging elephant, it is better to release four shots from a quick bolt action than to reload a double with shaking knees and fingers.

If your team did a good tracking, it may happen that you encounter sleeping elephants.

How to stop charging elephants
--A charging elephant is the least dangerous game compared to buffalo or lion. In most cases you don´t need a big gun. It depends of course on the distance where the charge started and the character of the terrain. But in many (most?) cases you will make the elephant to turn off by producing a lot of noise. You can do it with shouting or metallic noise from punching a knife against the barrel. Next measure is a shot in the air above the elephant's head. The caliber is any you like. Once I had only my camera at hand when a bull started a charge. I tried to give room by walking backwards, but fell down on my back. My PH shot in the air, the bull stopped immediately making a skid mark and veered round. Even some steps sideways are not wrong, because an ele has a very bad eye sight and no directional smelling when running. All this measures are advisable, because to kill an elephant in self defense will often cause a strong investigation by the governmental or National Park authorities. But if that all doesn't help, you have to apply a frontal head shot. In this stirred up situation a brain shot is doubtful and missing it often occurs. You have to rely on a "knock down" effect hitting the head. My experience is that for at least stunning the elephant a .458 Lott and more is a good recommendation.

Hunting elephant cows
Nowadays hunting tusk less elephant cows to improve the genetic pool is very popular, but told to be the the most dangerous hunting exercise.

--When hunting tusk less elephant cows in a big herd, you may apply a "hit and run" technique. Approach the elephant for about 20 yards, shoot and hit the brain, the elephant falls down and the hunters must run away because now other members of the herd may start a charge. In a save distance you observe the scene and when the herd moves on, you can go to the laying animal, prepared for a final shot. This period can take several minutes, so I was able to observe the phenomenon of the animal being still alive after minutes. But in most cases they were stone dead.
--The ele is not waking up or standing up after 20 minutes, but as I observed several times it is still breathing and/or moving extremities for minutes. Taylor reported the same up to 30 minutes. I don´t know what physically has happened in the elephant's head. With a bad head shot normally an elephant is stunned only for seconds, just touching the ground and up again. But enough time for preparing a second, hopefully final shot.

About "near misses" on elephant
An elephant is very susceptible for head shots missing the brain but knocking it down. That is the reason, why also calibers of high energy but poor penetration (where the bullet may not reach the brain) are satisfactorily used for head shots. The experienced hunter knows, that he has to run to the animal and give as early as possible the final shot into the neck or lung/heart. Sometimes the elephant is up again and disappears. The time span a knocked elephant is down can be from a few seconds to 20 minutes (still alive!). If the shot placement and the penetration is very poor, the elephant only shakes its head. A real miss of about an inch above the brain into the honeycomb structure is not lethal to an elephant bull, because this structure is filled with air and there is only a relatively poor energy dissipation. The situation is dramatically changed with elephant cows. Their honeycombs are filled with liquid and a shot into it causes a pressure wave immediately killing the animal, sometimes brain tissue is pressed out of the trunk.
Last edited by a moderator: Dec 1, 2016
Norbert Hansen
www.grosswildjagd.de 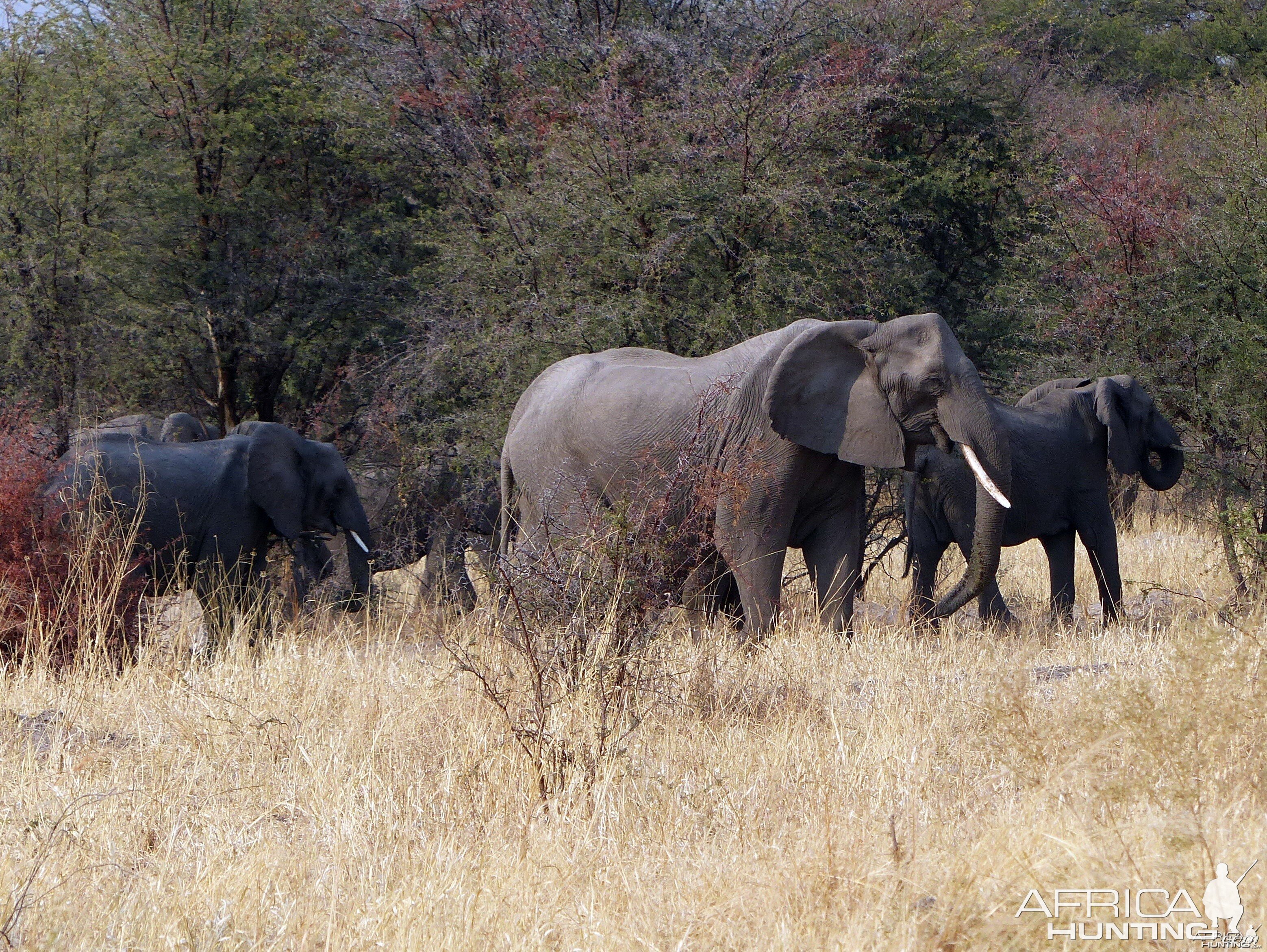 More than 10 years old, great article and sound advice from somebody who clearly has experience on the subject.....
You must log in or register to reply here.