Hunting Elephant By Bow With A Single Arrow
by Rassie Erasmus

“I receive the signal to shoot. My heart pounds in my chest… Yes! Yes! She’s mine!”

A Big Five game hunt remains a cherished dream for any hunter, one that is treasured like the first sip of a good whiskey around a late evening campfire. Elephant hunting… I always wanted to hunt “the big one”, Nature’s age-old path forger, the one who never forgets.

For me, the hunt had to be an unforgettable experience. I wanted to relive my father’s old stories and feel the same rush of adrenalin through my veins as we faced one another on the hunting ground, combatants on equal footing – the elephant with its excellent senses and exceptional power… and me, on foot, with my bow…

But wait, every story has a beginning. Early in February 2004 I received an unexpected call from my American friend, Steve Chicilo. He invited me to accompany him on a lion hunt to Zimbabwe and offered me the opportunity of a lifetime – to hunt elephant. My answer was a double yes. I could hardly believe my ears.

I immediately began my preparations and spent days in my bow shop, Archery Afrika. I knew I would only get one shot, so it had to be a kill shot, otherwise it would be tickets for me. Choosing a bow for this daring adventure would be the most important decision I would make, like the old cliché “a matter of life or death”. Together with my co-worker John Gibson, I decided on the Mathews Black Max 2, although we made a few changes to increase the foot/poundage. My friend Steve Kobrine crafted special arrows with a total weight of 850 grain. I was satisfied with a 115 foot/poundage.

The day dawned for our departure to Harare, Zimbabwe. Upon our arrival, we were flown in a small airplane to the Kariba hunting area, a beautiful place separated from the Matoesadona National Park by the Ume river.

George, who works for the HHK Outfit and would be our PH for the next two weeks, was there to meet us.

Steve’s lion hunt was hard work, but we achieved success during the first week. I could scarcely contain my impatience, as we also picked up elephant spoor every day, but it included young ones and I wasn’t looking for family groups. 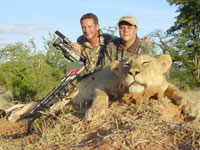 Steve Chicilo (rignt) with the lion that he shot in Zimbabwe. With him, Rassie who captured the whole hunt on video.

One afternoon we took the boat and searched for elephant along the banks of the Kariba. We saw many, but no loners. We were running out of time and I eventually decided to accept that I wouldn’t be shooting elephant on this trip. Perhaps next time, I promised myself, but I continued to enjoy myself. Each day was a rush and the scenery was unbelievably beautiful.

On day 11, while on a road we hadn’t traveled on before, we spotted the spoor of an old elephant. George decided that it was worthwhile following, as there were more bigger tracks than smaller ones. After quite a distance we encountered a cow with her calf. Slowly, we moved around so as not to frighten them and continued to follow the spoor.

It was a long walk and the sun had already begun to set when we arrived at the dry riverbed. As we moved down the bank we saw the old cow ahead of us in the brush, with another two to the left of us.

The wind was blowing in the wrong direction for us to go further, however. We retired and decided to cross the river higher up at some overhanging trees. Now the wind blew in our faces, and we slowly moved to where we had last seen the elephants. We saw one. It was an old, large cow.

I received the signal to shoot. Yes, yes, yes!

I walked five slow paces, tested the wind and then moved ahead against the bank. We crept to 20 meters away from her but couldn’t get a shot. She stood with her hindquarters towards me. We had to think quickly before the wind changed. We decided to move back and stalk her from the left side. This was a dangerous option but the only one to take for a kill shot. If the elephant decided to turn left when she smelt us or after a shot then we would be in trouble.

The banks of the river were high and upright. Luckily the river sand was soft and soundless. The wind was right and everything was perfectly into place. Here was a shot – she stood sideways with her leg slightly forward. I sank slowly to my haunches.

Everything was happening very quickly. I pulled my bow surprisingly easily (thanks to the adrenalin flowing through my veins) and centered my sight, following the pin to the wrinkle behind the elephant’s shoulder to where it almost ended.

I released my arrow and held my breath. I watched the arrow penetrate right through to its feathers. Perfect. The elephant trumpeted and burst through the Jessbush. Relieved, I sucked air into my bursting lungs. I saw the other elephants running in the opposite direction. We stood and listened to breaking branches. Suddenly all was quiet, dead quiet.

George was pleased with the shot placement and said we should wait half an hour. At one ‘o clock we began following the blood trail. There was a considerable amount of blood where the elephant had burst through the bushes. I saw my arrow lying in front of me, dark with blood. The Rocket Arrowhead was still whole. Carefully we followed the spoor.

There she lay, scarcely 150 meters from where I had shot her. I began to smile, and haven’t stopped since. Elephant hunting is everything and more than my late father’s campfire stories portrayed. The experience is difficult to describe. Life in nature will never be disappointing. I had fulfilled one of the dreams of my youth and can hardly wait for what the future will bring. 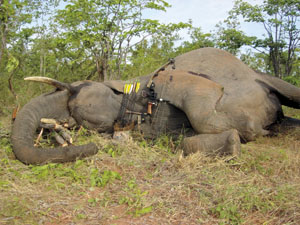 The large elephant cow went down scarcely 150 meters from where the shot was taken. 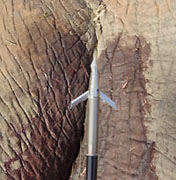 "Right where the crease ends," says Rassie "that's where I placed the shot".
Last edited by a moderator: Dec 1, 2016
You must log in or register to reply here.

Elephant Encounters Of A Different Kind

The Largest Animal that Walked Ever Felled by a Gun