Other threads about hunting Bushbuck and Vaal Rhebok got me to thinking about other smaller, less "glamorous" species that are, however, very worthy trophies.

I like the looks of the Common Reedbuck and it is fairly high on my wish list. So....I'm looking to find out about hunting these shy antelope.

Where is a good place to go if a guy wants to hunt Common Reedbuck? What are the shot distances like? What is a good cartridge and rifle for such hunting? Which optics are best? How is the hunt conducted?

What is a good trophy? A great trophy? Anybody have pictures?

All things Common Reedbuck can be discussed here. Looking forward to the responses...thanks!

I will try to have my wife post a picture this weekend. But I can tell you they are beautiful animal. I saw Mtn. rhebok and common rhebok on my last trip and could only afford one so I took the common rhebok, because it has bigger horns. Mine was a little around 12 inches. I was happy with it and the pelt on the animals is silky smooth. They have a rubber-like horn at the base of their horns that comes off later because it falls off during the boiling of the skull and has to be replaced by the taxidermist.

Anything over 12 inches is good to me. I have seen 15-17 inchers already on people's walls. You have to remember not everyone puts their animal in the record book...I don't.

At least in RSA, I didn't think the common rhebok...was too shy. If you were bow hunting that's one thing. But most people tell me you can stalk within 200 yds...fairly easy. They are common in certain parts of Mozambique too. I don't think they are a tough animal at all. A 243 Win. and up will take one with ease.

I have heard they find them around grassy waterways and swamps in Africa. But people also have shot them on grassy hill tops too.

I think they are a must hunt animal if you are a antelope hunter!
C

In RSA Common Reedbuck naturally occur mostly in the Eastern parts of the country including the Eastern Cape, Kwa Zulu Natal Mpumalanga and some parts of Gauteng and Limpopo. They like wet "vleis" (swamp land) and grass lands with tall grass that they can hide in during the day.

They are mostly active at night so early morning (from first light up to around 10am) and late afternoon (an hour or two before dusk) is the best time to hunt them. Shot distance could be anything from 80 to 200 yards.

In my view anything from 12" upwards is a good trophy although I know of some monsters (18"+) that have been bagged.

The one in the picture measured 14" and was hunted with me in KZN. 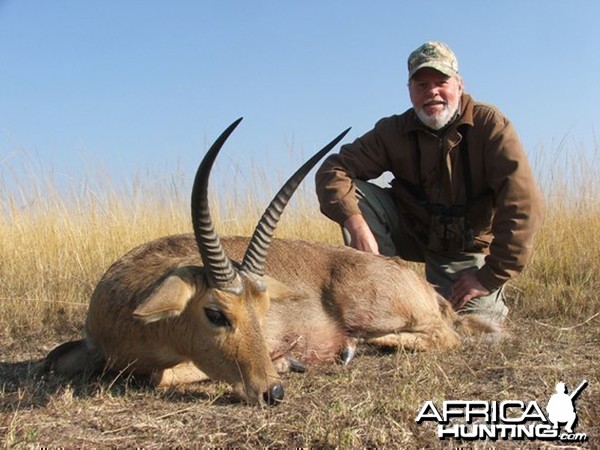 Chris,
the horn shape, structure and apearance is almost a smaller version of a Waterbuck.

Are the two related at all ?
Paul Truccolo.
C

Paul, Waterbuck and Reedbuck belong to the sub family "REDUNCINAE" together with Mountain Reedbuck, Red Lechwe and Puku.

Here's another one we hunted in the same area last year: 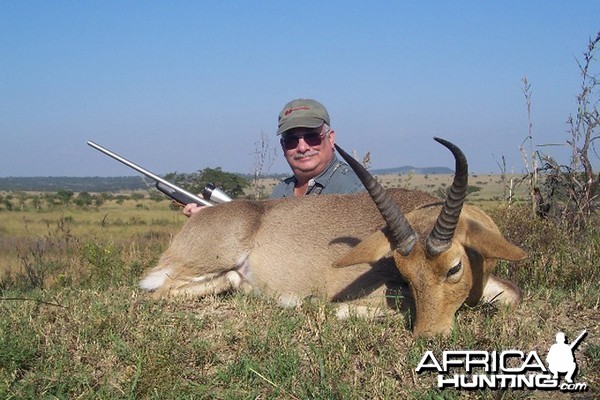 Those are fine trophies, Chris. Thanks for sharing your knowledge and the photos.

There is little wonder waterbuck, common reedbuck, lechwe and mountain reedbuck are all high on my list....

Hi Chris, I see my buddy Dennis there with his nice reedbuck he took with you a while back. He loved it there. I took a 14 incher in Zim back in 1996, if anybody wants to see it just go to my page and look at my pictures. 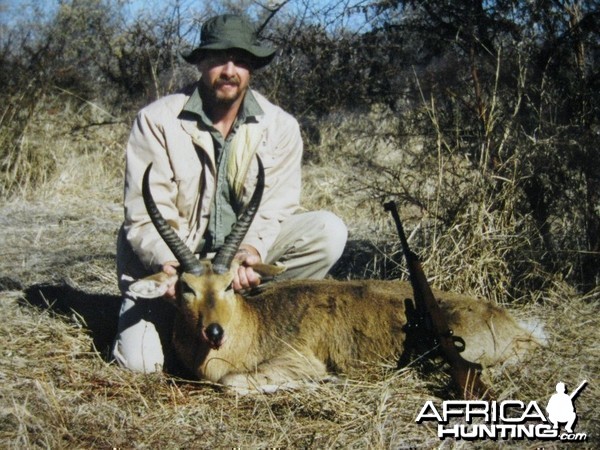 Here is my common rhebok taken with Russ Field Safari in May 2009. 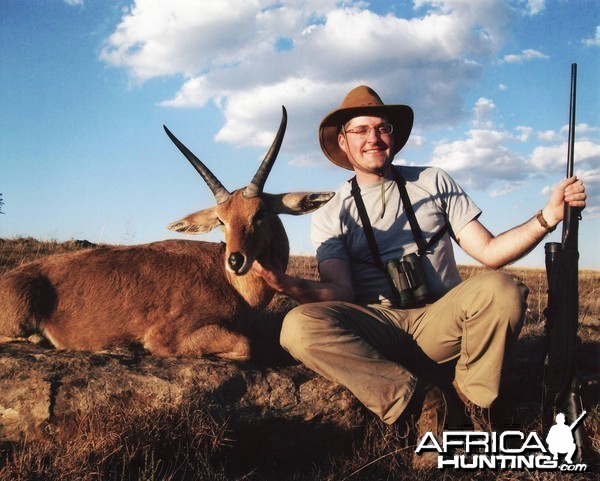 sestoppelman said:
Hi Chris, I see my buddy Dennis there with his nice reedbuck he took with you a while back. He loved it there. I took a 14 incher in Zim back in 1996, if anybody wants to see it just go to my page and look at my pictures.


Thought you might recognise Denny - Scott. Nice Reedbuck you got in Zim! Denny and I are busy planning his next African hunt for 2012.

This is one I killed in Mozambique. I was told it was a pretty decent one?? 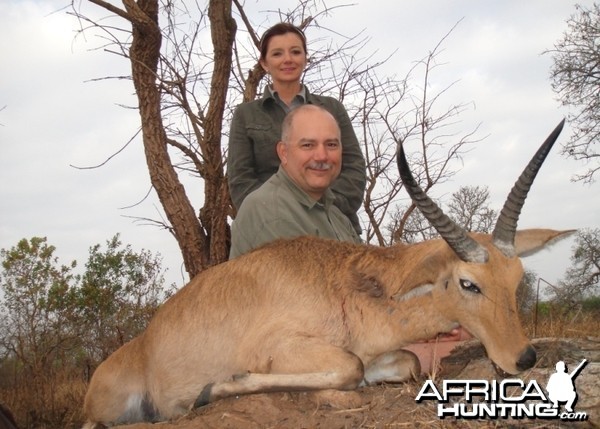 Mike70560 said:
This is one I killed in Mozambique. I was told it was a pretty decent one??
Click to expand...

In my opinion that is a VERY nice one Mike.
C

Mountain Reed buck is high on my list also. I never did see one on my 2 trips to Africa but I will most definitely be after one on my next safari!

My Reedbuck hunt was a great one. I spotted him before my PH but he tracked that bugger for over 3 hours til we put him down. He kept telling me he was too good to let get away. No idea how it scored , that wasn't important.
I will never forget that hunt. Now if I can just get back over and get a Mtn. Reedbuck to go with him.
G

View attachment 25352 It appears as though KZN is the place to hunt Common Reedbuck. I took this 15 1/4" in KZN while on a Nyala hunt. I passed up a 12"er early that evening in hopes of seeing something a bit bigger. I got lucky and it paid off. Congratulations to you on a great trophy.
J

My wife & I hunted Coutada 9 in Moz. last August with the Duckworths of Mokore Safaris. Like you, I was after a common species ( warthog) but I wanted a big boy, which I got. We saw many VERY large reedbuck while stalking hogs. This is wild, unfenced, "old Africa" but with very comfortable amenities!

I got a very nice mountain reedbuck on my last trip to the Eastern Cape. We're planning on chasing the common reedbuck while in KZN after oribi and red duiker.

The pictures above add to the building excitement.

The common reedbuck is become one of my favorite plains game to hunt! It has been the most difficult animal to get in my last safari. The place was not so far from the Kruger National Park 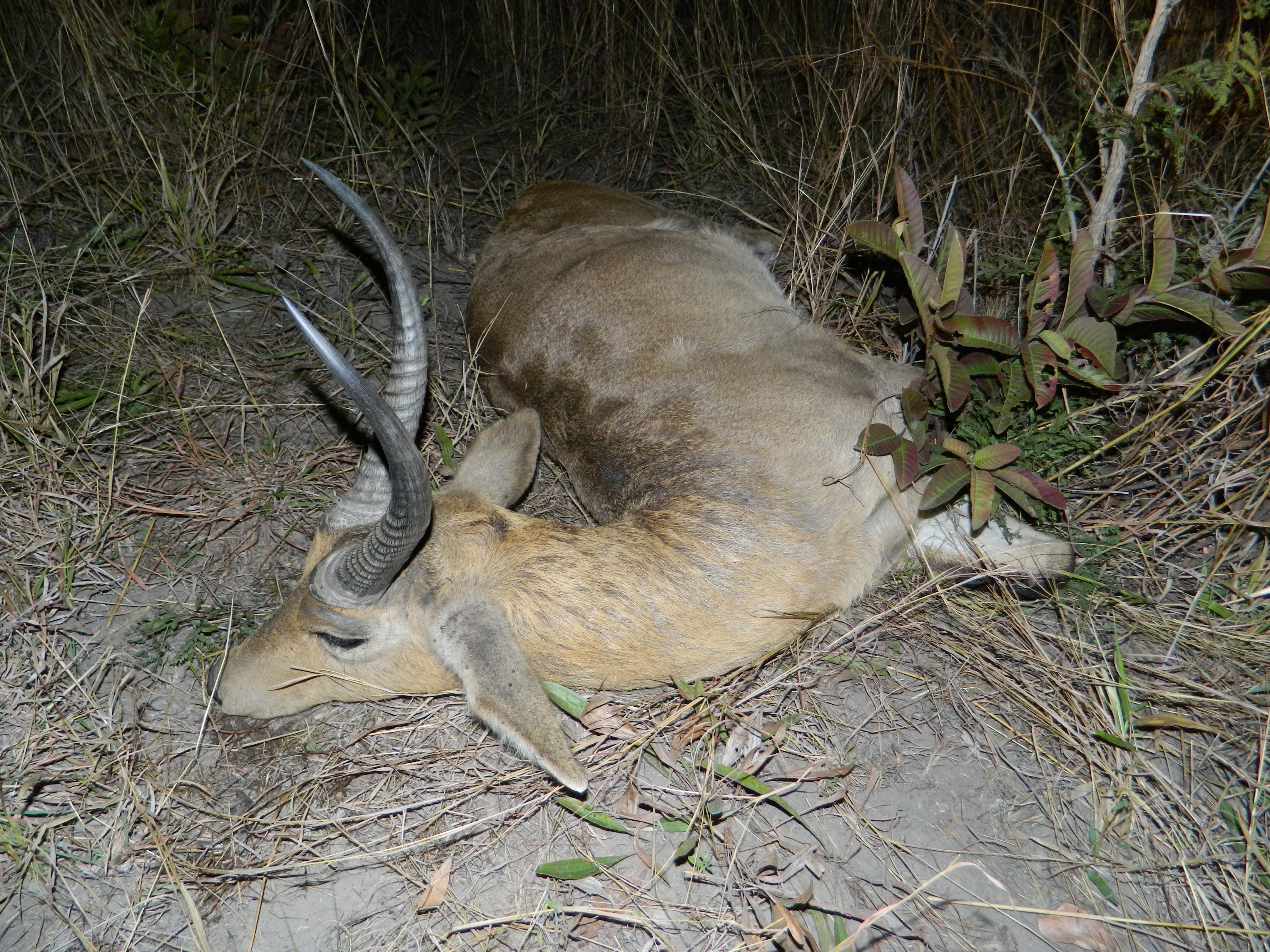 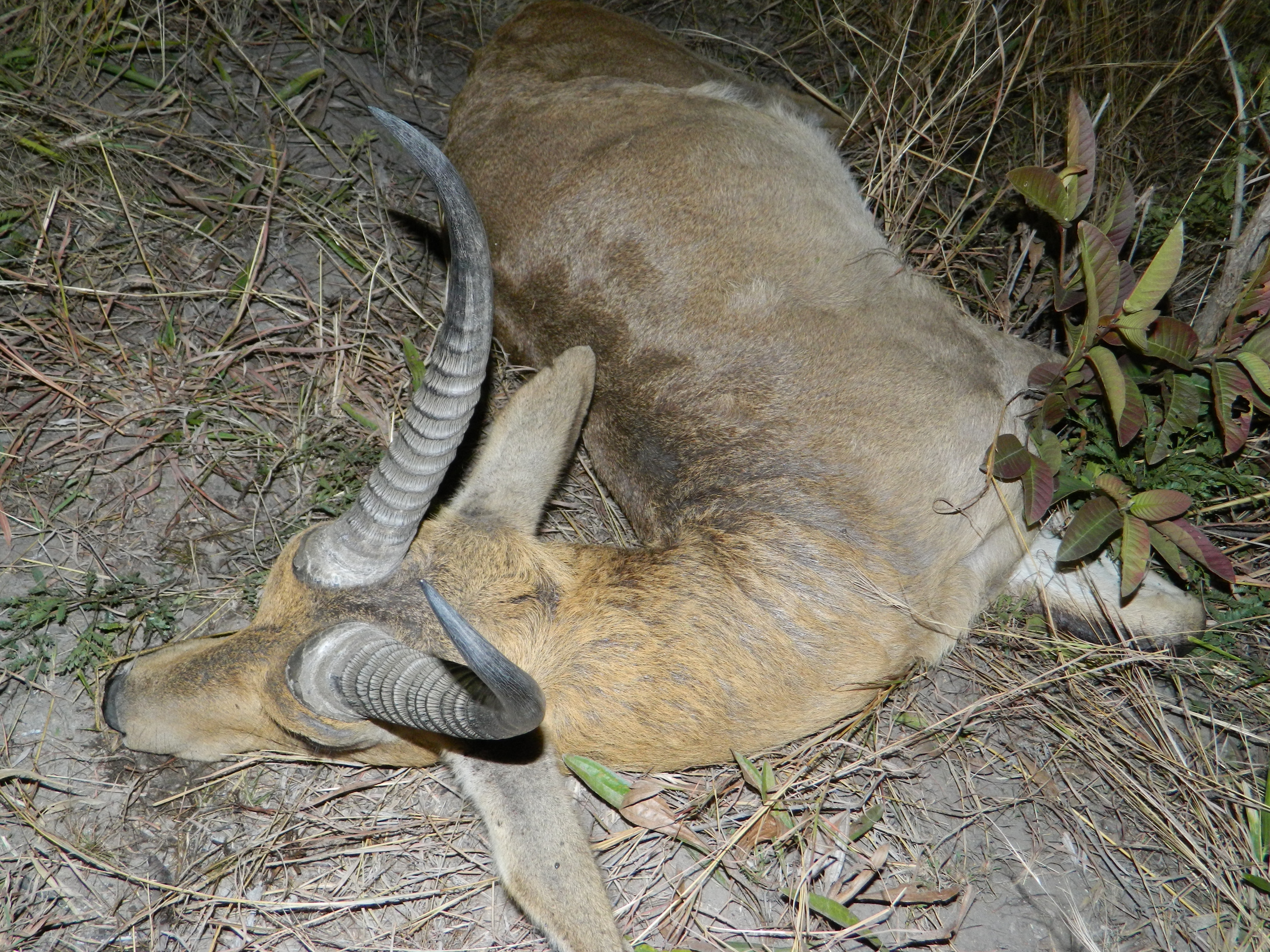 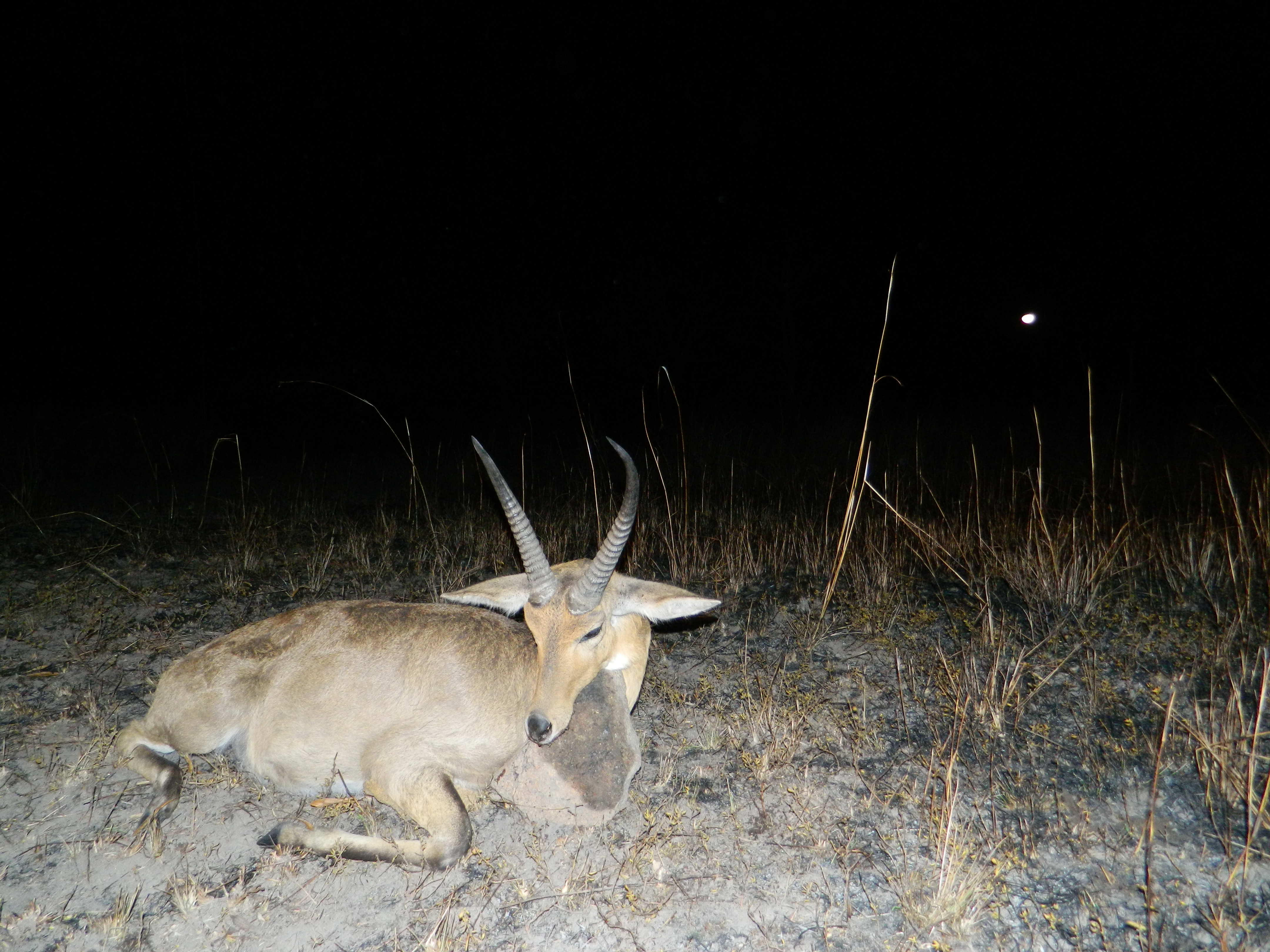 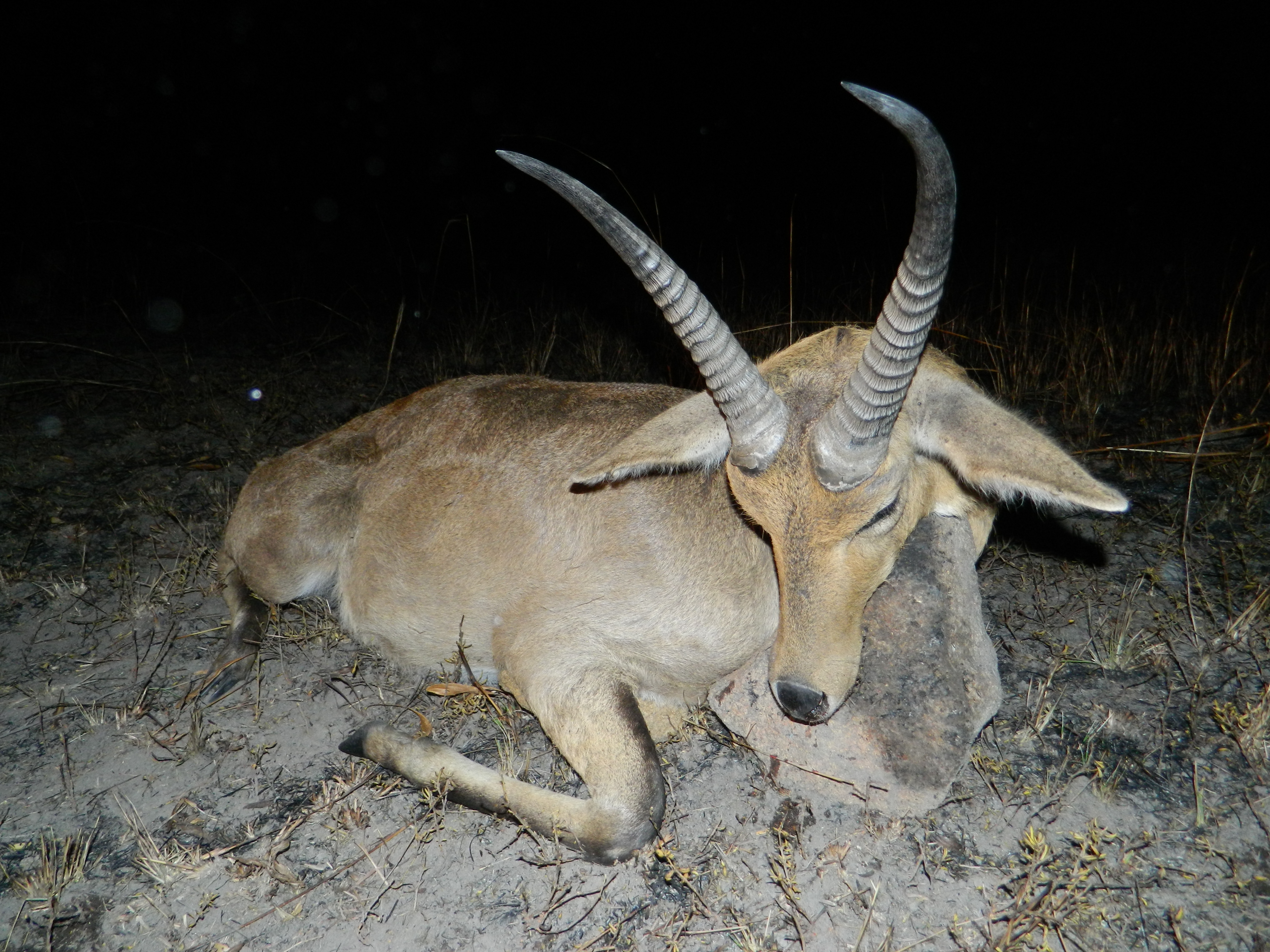 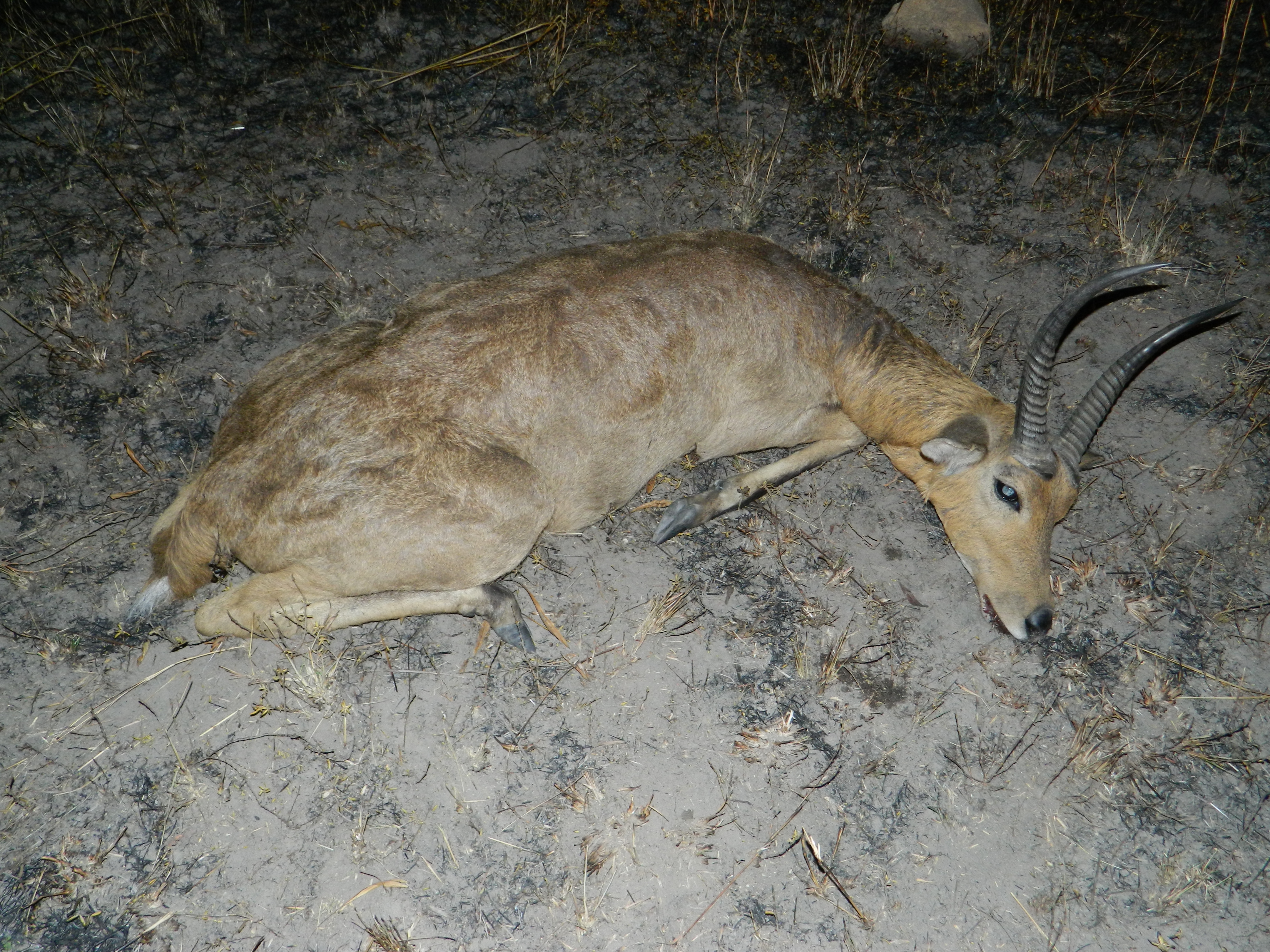 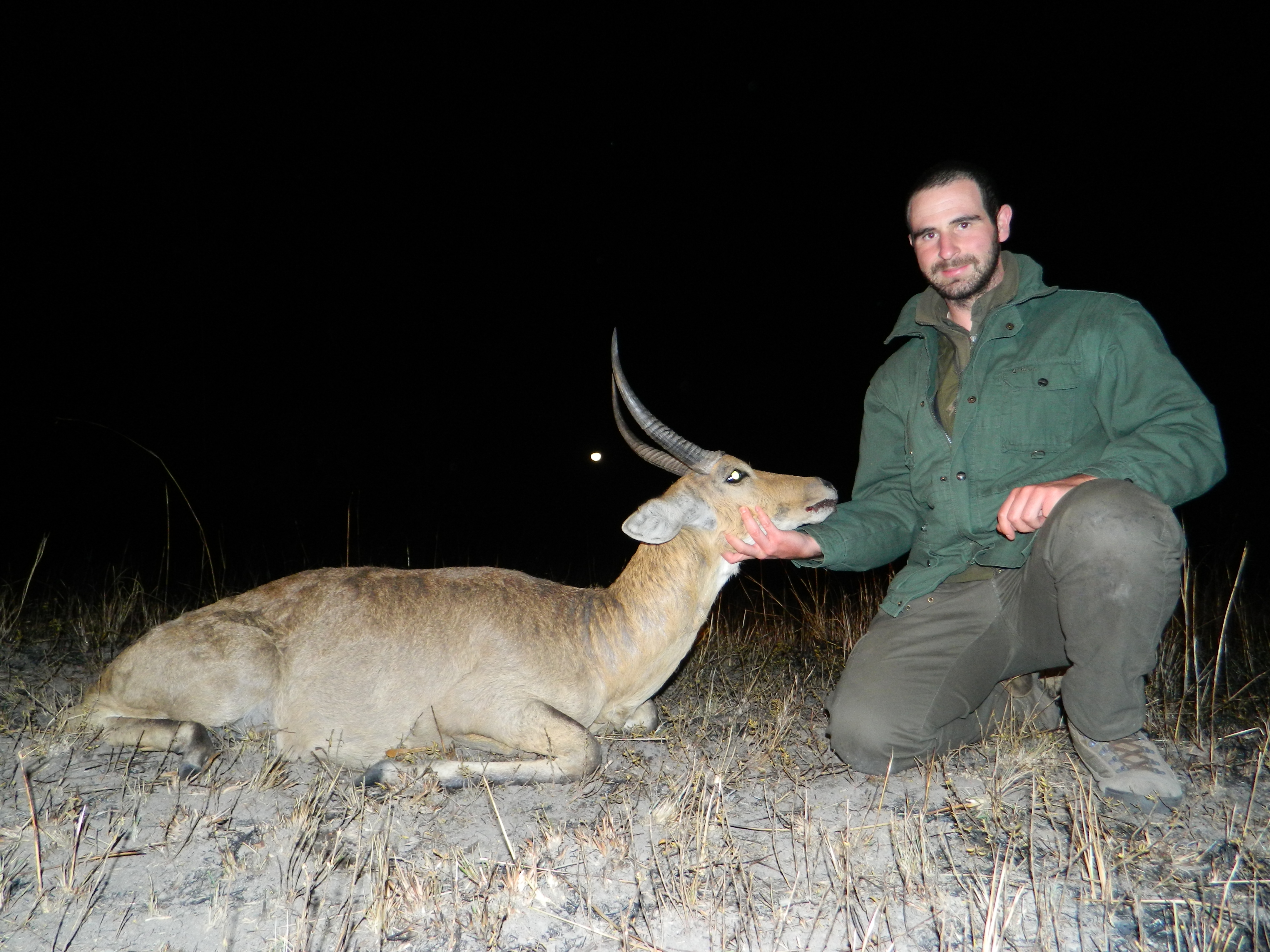 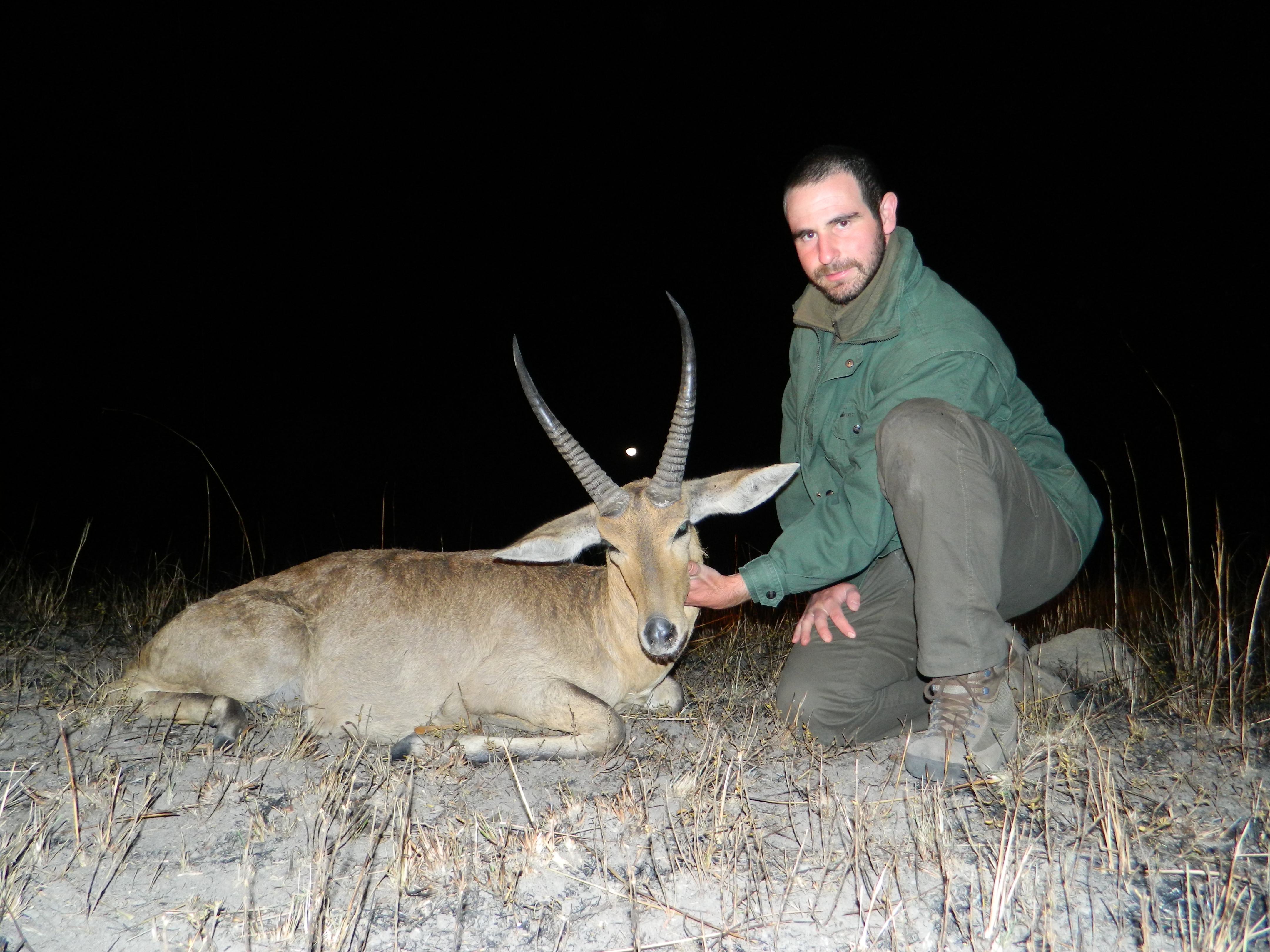 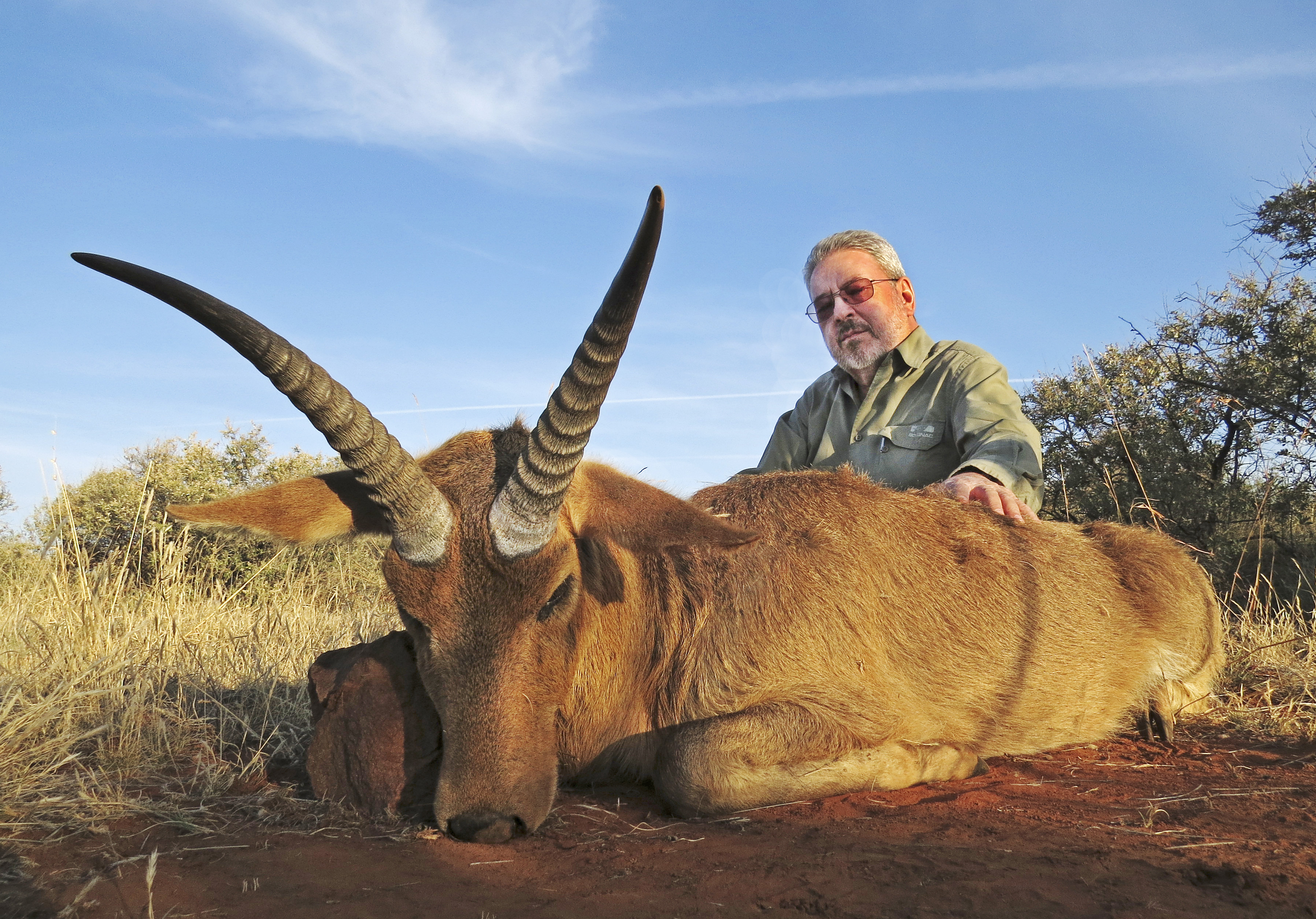 Mine from the Free State 13" just made RW. Late afternoon, at the bottom of a kopje. 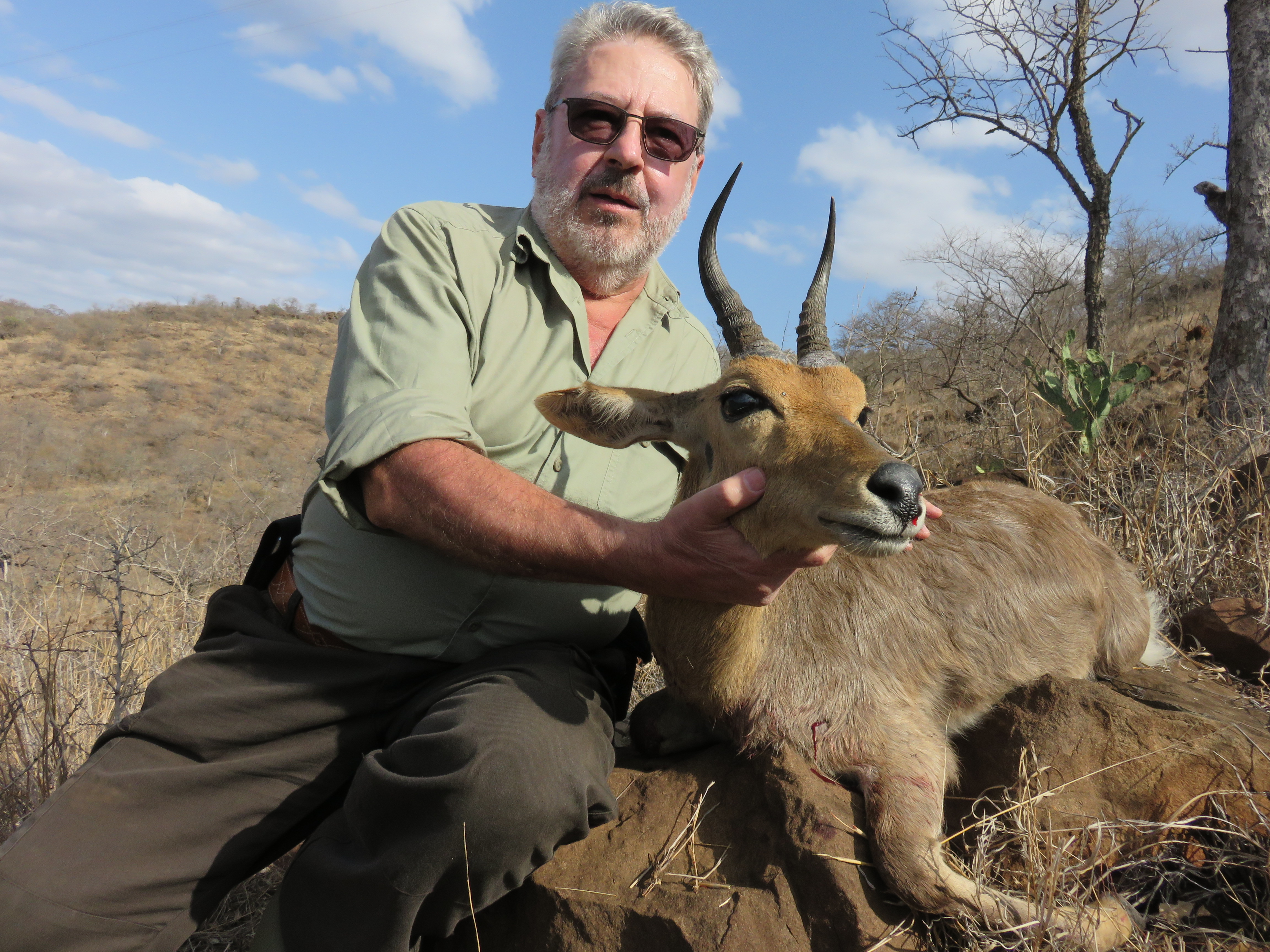 This Mountain Reedbuck is from the hills of KZN 7", RW is 6".

I have common and mountain on the top of my list for July in the Eastern Cape with KMG. Keep the pics coming!
Y'all can go to hell, I'm going to Texas! Davy Crockett

There's the reedbuck, the mountain reedbuck, and the grey or Vaal rhebuck, right? No mountain rhebuck?
You must log in or register to reply here.

Has anyone hunted all the species you can in Africa?
2