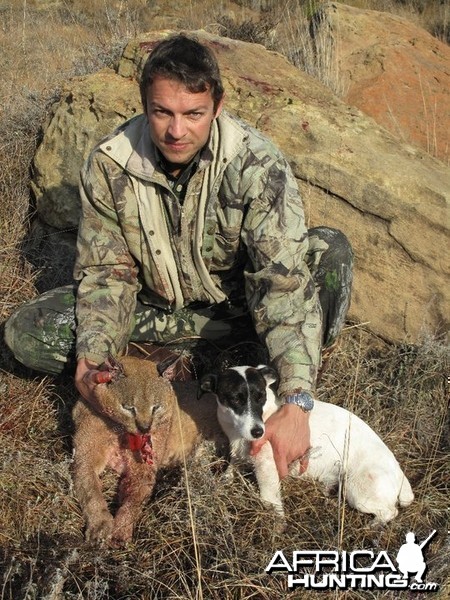 Lucky Me! 10 1/4inch caracal taken early morning. He is a monster!

Our property consist of wetland, rolling hills and a mountain. Likely the perfect combination for this wary and shy cat. But then again we must have lots, for I have taken 7 of these cats now and each of them during daylight hours. But it is specifically the last one I would like to share the story with fellow hunters.

I flew up from the Western Cape to the Freestate to accompany a hunting group. This time of the year the mercury drops to well below zero Celsius. The country side is covered with frost every morning and the air crisp. We were driving along the foothill of the small mountain with me on the back of the pickup with the clients. The next moment a enormous cat jumps up a mere 60 yards in front of us and makes it at top hast towards the hill and disappearing from site. I demanded the pickup to stop asking my client if I could barrow his 7X57. But with the time that elapses from stopping and handing over the rifle the cat was gone before a shot could present itself. This is where only a fellow hunter can share in my disappointment. This was a good cat, much bigger than I have taken or seen from before, in broad daylight and it is gone. I don't go out and actively hunt these cats but I lose allot of young and small game to these cats. So if our paths cross I tend to make most of these opportunities.

Interestingly enough all my previous cats did not make the Rowland Ward minimum. I was starting to think that this part of the country does not contain big cats but if memory serves me right a record cat was taken not more than 60miles from me. So why where the eluding me?

The rest of the day went along well. Father with two sons doing their first hunt. They took each a nice Redhartebees with perfect one shot kills. But I could not help myself from thinking about this cat and the lasting picture in my mind of how big it was. Something had to be done. So I sprung a plan. Some years ago I drove out on the property as the sun was coming up and the morning temperature was well below zero Celsius. Driving past the hill when I saw something moving. Stopped and had a look but it was already gone. This was my first encounter so I was still pretty green at this. Only after sitting and watching the hill and spotting a second shape moving I realized that this was caracal. They were sunning them self! I returned 2 days later and as the first rays were touching the hill I was already glassing. There and behold was the cat on a rock, paws folded in exactly like a domestic cat. He ranged at 171meters and the 22-250 did the rest. At the shot I spotted a second one and got a shot at him as well. Two nice male cats in not even as many minutes! So with this bit of experience I decided to employ it again. I must say this was optimisms at its best. My dad was really adamant that we have to go have a look which was nice, because we had to get up really early in very cold weather. But misery loves company.

We got to the farm just before daybreak. I had my 2 Labradors, 2 Jack Russell's and a Border Collie. The plan was if nothing presented itself I would sweep the hillside with my dogs. Also a tactic that work from before. The labs for their noses, Jack Russell's for their keen eyesight and overall sharpness in the veldt and the Border collie, well the collie wanted to come along. Last year I spotted a cat and followed it into some thick grasses were the dogs flushed it from a mere 5 feet from me and the shotgun worked very well. So all my bases were covered all I needed was the cat to show itself. We stopped well away from the hill to get the kit ready. I had the 22-250 for dad and the 7Rem Mag for myself but only brought it along because I wanted to site it. Luckily I took it out and sat it next to me in the passenger seat. I really wasn't expecting to see the cat and was more prepared to try and flush him. I placed the shotgun on the backseat. So with binos in hand and dad driving we were ready and made our way over to the hill. The suns first rays were starting to worm up the country side. We stopped about 200yards from the hill. After 10 min of glassing we decided to move around to the other side. With the same results here I suggested moving back to the sun side but driving through the veldt so to be closer to the foot of the hill. We did this and stopped close to the place where I saw the cat the previous day. We waited for 5min and decided to release the dogs. The passenger side was the closest to the hill and I still sat watching the hill as my dad off loaded the dogs. With the dogs of they could not contain there excitement and started barking. This it seems set things into motion. What happened next took maybe nothing more than 3 seconds but it felt as if time slowed down. 60 Yards in front of me roes the same cat running at top speed towards the hill. I yelled to my dad which was still standing at the back of the pickup, to grab his rifle. As he was making his way foreword I got my 7mm next to me and in one fluid motion brought it to my shoulder whiles chambering a round. The cat was running through tall grass but I could see a gap between the bushes he was making for that might present a shot. I lined the crosshair up with the opening that was not more than 2 foot wide. As he broke I let go and the last thing I saw was the white of his belly. My dad screamed that I got him. It is hard to put feelings into words but this was one of my better hunting moments. I had to make an air punch! I made my way over with the dogs but he was dead when I got to him. This may not by a lion or leopard but still a monster cat for his species. He was 48inches from nose to tail tip and the scull scored 10 and a quarter! When he is dry I will enter him in the book and it seems he will make the top ten for Rowland Ward. His mount will also replace my first cat that I took on the farm. 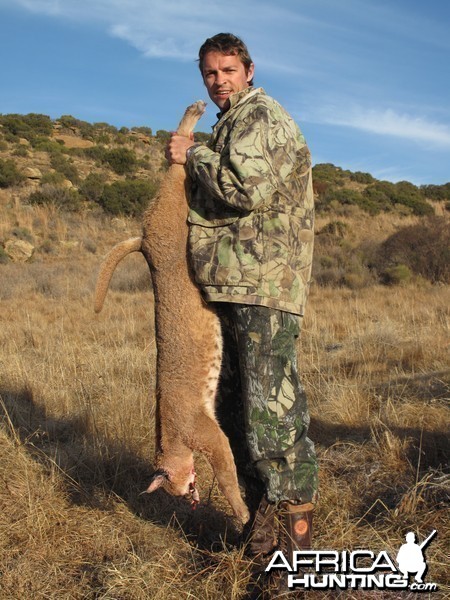 Success I think is where experience, preparation, commitment and luck meets up. Happy hunting.
Last edited by a moderator: Dec 1, 2016
You must log in or register to reply here.

C
The Fall Hunt is a Goat Rope