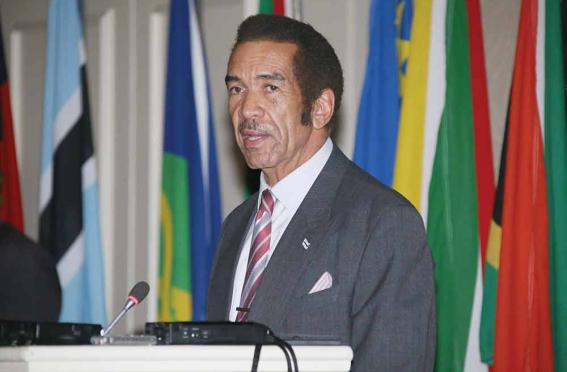 A study by University of Botswana academic, Professor Joseph Mbaiwa, has found that the 2014 hunting ban was not supported by scientific evidence, suggesting that the ban was a political decision.

The study titled “Effects of the safari hunting tourism ban on rural livelihoods and wildlife conservation in Northern Botswana,” says that: “The decision to ban hunting in Botswana seems political as it is not supported by any scientific evidence, and there was no involvement of local communities in the decision-making process.”

The hunting ban marked the ultimate victory by photographic safari investors against trophy hunting safari tourism investors, their long time rivals in the fight in which President Ian Khama has a vested personal and financial interest.

The report by Mbaiwa adds weight to speculation within conservation and wildlife circles that Khama made the decision at the instigation of both Wilderness Safaris and a National Geographic filmmaker, Dereck Joubert.

Khama is a shareholder in Wilderness Safaris and a personal a friend of Joubert a recipient of one of Botswana’s top-most Presidential honours.

Khama presented Joubert and his wife with a Presidential Order of Meritorious for, “both their conservation work and the outstanding impact that their films and books and appearances have brought to Botswana”. Filmmakers Dereck and Beverly Joubert own the Selinda Camp and Concessions which is also part of Wilderness Safaris Limited. Khama was also a business partner of Dereck’s older brother, Keith Eric Joubert who died some time ago.

Debbie Peake, who is a director at Mochaba Development, which is a trophy safari in Maun, has in the past stated that, as a matter of fact Joubert was influential in the government decision to ban trophy hunting.

She goes further to accuse Joubert of sabotage.

“His (Joubert’s) position against hunting safari is a personal vendetta against some individuals. He just makes wild claims that are not scientifically proven. His sentiments are just a public stunt meant to put him on the map as a National Geographic filmmaker,” said Peake.

Graeme Pollock of Safari Botswana Bound agrees, adding that everybody should be worried that for all his influence on Khama, Joubert has no scientific background to guide a decision which as it turns out he now enjoys the singular ignominy of almost single-handedly having forced on government.

“What scares me is that he has no scientific background. People who like to make movies and go to Hollywood like to make noise because they come up with these crazy ideas to get attention. Unfortunately they are the ones who the authorities listen to,” added Pollock.

Jourbert has, however, brushed aside insinuations that he used his hold on the President to orchestrate a hunting ban.

“I don’t have influence in the decision making of the government. When you see the declining of wildlife species, hunting and poaching cannot be tolerated. I had a conversation with the President and I don’t think I would be held responsible for influencing the ban because one person cannot influence such a move,” said Joubert in an earlier interview.

The study by Mbaiwa found that the safari hunting ban contradicts the goals of conservation and rural development which the Community-Based Natural Resource Management (CBNRM) programme was established to achieve.

According to the study, the ban is reducing huge benefits generated by communities from safari hunting adding that in Northern Botswana CBNRM has proved to be an approach that improved livelihoods and food security in areas where it was implemented.

When announcing the hunting ban, the then Permanent Secretary in the Ministry of Wildlife Neil Fitt said the decision to temporarily ban hunting had been necessitated by available information which indicates that several species in the country are showing declines.

“The causes of the decline are likely due to a combination of factors such as anthropogenic impacts, including illegal offtake and habitat fragmentation or loss,” he said.

However, Mbaiwa’s study revealed that the Department of Wildlife and National Parks has not conducted annual aerial wildlife population surveys since 2005.

“As a result, there is no biological/scientific evidence to suggest that hunting in Botswana, as carried out in CBNRM areas, has been detrimental to wildlife conservation. In addition, there is no evidence to suggest that current wildlife numbers are unable to sustain safari hunting in the country into the future. CBNRM development in Botswana is thus faced with a major challenge in its future development,” the report says.

Mbaiwa says: “There is lack of scientific evidence to support claims that hunting as carried out in Botswana is detrimental to wildlife populations.”

The study explains that “this means increased centralisation of control over wildlife management and restrictions on the freedom of communities to derive benefits from wildlife via safari hunting are contrary to sustainable development ideals and will not promote wildlife conservation and rural developed as espoused by the social exchange theory”.

The study further found evidence that safari hunting in Botswana was regulated particularly through the quota system to promote sustainability.

“The wildlife quota system provides for selective hunting hence it is regulated” such that only old male animals were killed, leaving female animals with the young reproductive bulls to continue with the reproductive cycle. It was only done six (6) months in a year during the non-breeding season,” the study says.

It says selective hunting was sustainable in that it maintained a balance of wildlife population in their surroundings. “The wildlife quota system therefore provided the safari hunting industry in Botswana with a number of characteristics which enabled the industry to play a potentially key role in conservation outside of national parks and where alternative wildlife-based land uses such as photographic tourism may not be viable,” it says.

The study states that restricting safari hunting represents a retrogressive step and a top-down imposition that would reduce the probability of wildlife-based land uses in many rural areas, and reduce community earnings and buy-in to wildlife conservation.

The study warns that the ban on safari hunting will among other effects increase animal/human conflicts, with massively reduced budgets left to deal with the consequences. “In this regard, hunting in Botswana was more of a conservation tool than an ecological threat which warranted a hunting ban,” observes the study.

It says that “if people view wildlife resources as ‘theirs’ because they realise the benefits of ‘owning’ wildlife resources, and understand that wildlife management needs to be a partnership between them and the government, there is a higher potential for them to conserve wildlife species in their areas”.

However, these achievements in conservation in community tourism areas, the study says, are likely to be reversed by current policy changes in safari hunting tourism in Northern Botswana.

“As such, with reduced benefits from CBNRM and no role in the decision-making process regarding wildlife conservation, there is likely to be a return to poaching in CBNRM areas in Northern Botswana hence a reverse of conservation gains,” it says.

A good article. Thanks for sharing. This is yet another instance where the facts of managed hunting gets "blown away" by the fantasies of the uninformed or misinformed.
B

Science holds little sway over policy making in the US; one has to imagine it will be even less influential in Botswana. Still, this is a step in the right direction. As I understand it, there is quite a surplus of elephant in Chobe and they are destroying the ecosystem. If hunting is resumed on a science scientific basis there may bargains galore.

Oh wait. This is Africa we're talking about. Couldn't happen. I take it back. Just emotion.

Science.....That only means something if liberals or the extreme left have something to gain by it. Other wise it's just brushed aside because it doesn't fit into there agenda. PERIOD. Open debates and rational decision making for wildlife is and I m afraid to say are a thing of the past. God help the future of wildlife.
Tommorow is promised to no one. Go live your dreams.

Hank2211 said:
Thanks for posting.

Oh wait. This is Africa we're talking about. Couldn't happen. I take it back. Just emotion.
Click to expand...

Upon mature (!) reflection, I feel I may have unfairly maligned Africa in this post. The reality is that politicians of every stripe make decisions based on what their donors want. The 'unscientific' decisions of the USF&WS dealing with various imports of animals, and of other agencies addressing lead bullets are just some examples of playing to a donor base, even thought the science (and the logic) is decidedly against the positions taken.

So line up Botswana. You are no better than the rest of us!

Thank you for sharing
John 3:16

For what it's worth, British Columbia has just closed grizzly bear hunting, even though the population is thriving. So science has as little meaning in BC as it does in Botswana.

Thanks for posting. I saw this on Facebook the other day and found it to be a good read.

I can't speak to all Botswana but my wife and I toured chobe last November. Places look like paradise turned into desert due to overpopulation of elephants. We were told the only folks that were happy were the poachers. Very sad as I would love to hunt the fringes
You must log in or register to reply here.

"WILDLIFE HUNTING TO CEASE IN BOTSWANA"