Lots of talk at the SCI convention about the long awaited reopening of hunting in Angola. Several outfitters and professional hunters have been actively involved to make this happen for a couple of years now.

I am here to say that the ink is till wet but the deal is finally done and hunting in Angola will begin in 2010. The predicted hunting season will be from August through October.

I had a nice conversation with Butch Coaton from Zimbabwe, a well known PH and the son-in-law of Roger Whittall who has been spending some time in Angola surveying the game and preparing to hunt this area. He showed me some video footage of the hunting area on his computer and it looks very promising, I saw Elephants and Buffaloes in good numbers. In some areas the main river reaches out into many streams creating a vast swampy plain that can span 5 kilometers across perfect for Sitatunga and many other species (see the extensive list of species below).

Roger Whittall has been given permission to do promotional hunts in Angola for this year, his company has been allotted the Southern most part of the concession area bordering the Luiana National Park. Roger is now back in Zimbabwe from the SCI convention. He will be heading to Angola as soon as possible so he can to get things moving, as there is a lot to do to set up camps and infrastructure as interest for hunting in Angola is high. Butch will be in Angola during February and March and will in a better position to answer all of our questions when he gets back.

Quotas are yet to be finalized for each hunting area and outfitters are already working with CITES...

For Roger Whittall Safaris prices for Angola, click here, and for a close up map of the entire hunting concession area, click here.

Detailed Map of Angola
(click on thumbnail to enlarge map) 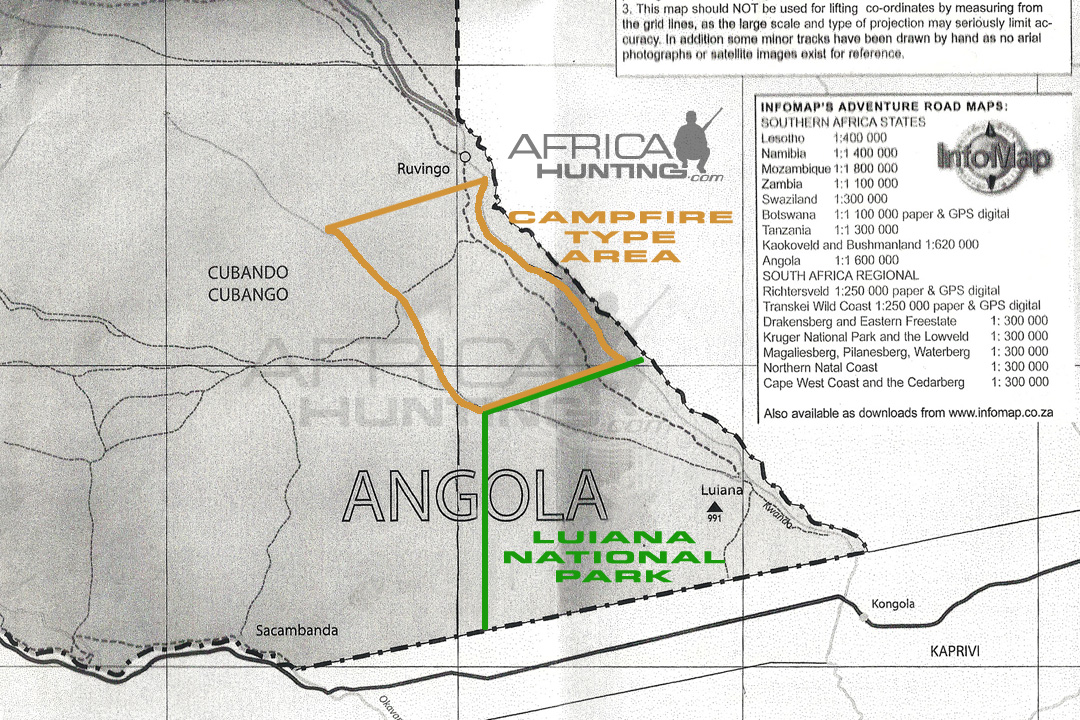 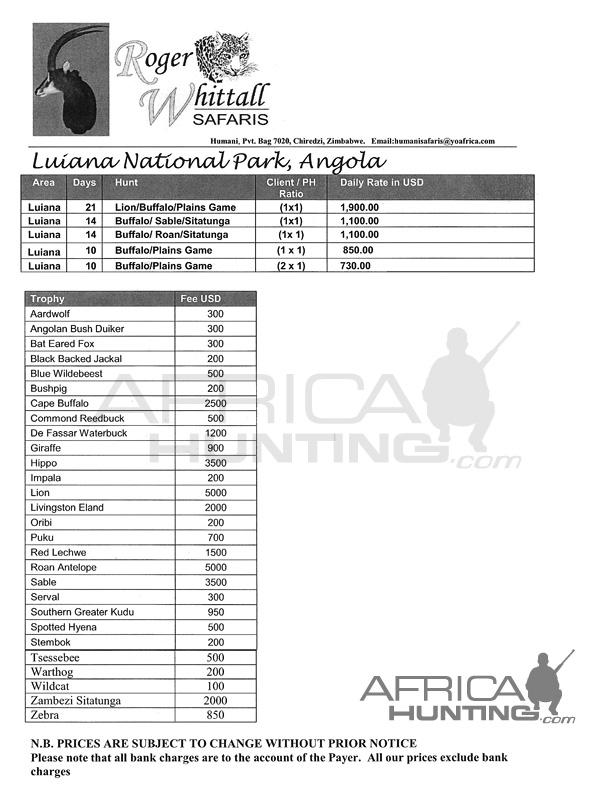 I have it on good authority that there will be no hunting in Angola as yet.

Please would it be possible to confirm with the safari company with whom they made this agreement and if they are in possession of any government contracts to confirm this?

Vaughn,
I am looking into it, sent out an email, as soon as I get a response will let you know. As you mentioned, no hunting yet, it is supposed to be for later in the year, from what I was told August through October.
Jerome Philippe, Founder of AfricaHunting.com

Here is the reply that I got from Butch Coaton...
Hello Jerome - nothing signed yet, no hunting taking place yet - it is all taking a long time, as only Africa can... slow progress I am afraid. I will keep you in the loop.
Cheers for now
Butch
Vaughn, share with us any news that you might have. Thanks.
Jerome Philippe, Founder of AfricaHunting.com

Do you have any contact details for the gov department handling the hunting areas?

Henry, I have not been in contact with any of the government officials in Angola.

Here below are a few links should you want to make some contacts.

Website of the Ministry of Agriculture (Ministério da Agricultura): www.minagri.gov.ao

Website of the Ministry of Environment (Ministério do Ambiente): www.minam.gov.ao

Here is the Portal of the Government of the Republic of Angola (Portal do Governo da República de Angola): www.governo.gov.ao

The website for the Embassy of Angola in Washington: www.angola.org

I have just returned from a month in Zimbabwe with clients and travelled extensively around the country. One of my stops was a lunch with Roger Whittal at his Humani ranch. He is optimistic that hunting will take place in Angola for the 2011 season. He is still working on paperwork and assisting in writing the game laws for the country and sorting out CITES, gun permits, etc.
According to Roger, game seems to be abundant and trophy quality good but makes clear the first string of hunters in must be adventurers and explorers at heart. I am waiting for more info from Roger in order to start a list of potential hunters. As I receive more info I will be sure to share it.

Thanks for the update Tim.
Jerome Philippe, Founder of AfricaHunting.com

Have we got any fresh news regarding this?

Yes, here is the link to an update: Efforts to Open Hunting in Angola Have Been Abandoned
Jerome Philippe, Founder of AfricaHunting.com

And sorry.. I did not see the other.

It is a shame when you look at the land, the terrain, the water and all the great animals that could be there if people didn't mess it up....it's a crying shame. It should be a paridise for all the great plains animals and the Big 5. At least the Giant Sable might have a future yet!

Since my friend Shaun Buffee told me about this possibility I have been dreaming with hunting in such paradise.

Anyway, I would like to thank you those people who pushed this idea hard and expend time working to reopen this area.

....perhaps they are still clearing landmines....or the Govt is not sure the areas applied for are 'safe zones' yet.

Would be extremely detrimental to Angola as a country - if even one foreign hunter or guide become a statistic / casualty due to the millions of mines that was deployed in Angola with the 'border war' - which only ended in the late 80's.

The multitude of combating parties / forces were scattered all over Angola at the time with tendancies to become more concentrated to the South later on in the conflict. Mines were used extensively by all guerilla-fighting units.

I know there were huge mine-clearing efforts since then, but no one can guarantee every single mine as been lifted - no one, imo.

only just found this thread, but i am surprised at the amount of animals reported in what was going to be the hunting area in angola, and the variety on the theoretical trophy list. i know it was a long time ago but i hunted west zambezi in zambia in 1990, and this area looks as if it is opposite the angolan hunting area. i was told there wasnt a great amount of game in the west zambezi, but there were some good trophies if you could find them. there was hardly any game at all there, and what was there was very, very wary. one day when looking at desert veldt had got boring our game scout took us into the park for some game viewing, but when we came accross some buffalo they ran before we saw them simply at the sound of the engine. we found out that certain elements from one of the angolan factions used vehicles to run down and poach the game, also swapo units were known to get their meat rations there as well. just to show you dont know who is working for you i had taken a .454 casull revolver with me, and we thought we would have some fun and let the tracker shoot it. he looked at us and picked it up in a pefect two handed grip and fired a shot perfectly, he looked at us and said "very nice" then gave it back! if you have ever shot a casull you know that is impressive. we also had air america fly low over our camp going into angola, and returning 30 to 40 mins later on most nights, going into supply whichever faction they backed. sorry think i have got side tracked, but if the angolans were hammering the game in zambia there cant have been any on there side. also after the war finished a friend of mine who ran a zambian safari company went into angola and flew over these areas to see if any game was left, they had to leave as it was still too dangerous, but he didnt see anything.
Some hunting reports for Takeri Reserve Zambia posted by members of AfricaHunting.com:
- https://www.africahunting.com/threads/zambia-zambian-adventure-takeri-game-reserve.24291/
- https://www.africahunting.com/threads/zambia-hunting-report-takeri-private-reserve-zambia.16298/
- https://www.africahunting.com/threads/zambia-takeri-reserve-zambia.24065/
- https://www.africahunting.com/threa...eller-safaris-coenraad-vermaak-safaris.32091/

I have just returned from two months of hunting with clients in Zimbabwe. I had the opportunity to share a camp with Guy Whittal for a few days. Guy's father is Roger Whittal and is working closely with the Angolan government to re-open Angola to hunting. Guy indicated that the wheels are still turning, though slowly, and is optimistic that hunting will again be available in Angola in the future. Roger Whittal has secured a large area in Angola and has already established camps. I will post any updates on this as I receive them

Many of you have been asking for an update on the possibility of hunting Angola.
I met with Roger Whittal in the Save over three years ago to discuss the status of hunting opening up in Angola.
At that time Roger had made good progress with the Angolan government.
Roger had staked out a large area bordered to the south by the Caprivi strip and stretched upward along
the western border of Angola.

Roger indicated a fair amount of quality game and was excited about the prospect of hunting Angola in the near future.
Even though there had been rampant poaching during the war years there still appeared to be some wonderful trophies to be had. Poachers are not as focused on the length of horns but rather meat, therefore quality did not seem to be affected so much as numbers of game.

I spoke with Roger this morning and he indicated that there is no forward progress at this time.
These wheels turn slow to say the least.

I will be sure to keep you posted if there are any updates and appreciate all the recent inquiries.

You do have to be tenacious to get anywhere.
Thanks for the update Tim.

Appreciate the update. Thanks for keeping us informed.