Green and wet. That is how I describe the Cameroon rainforest to friends.

We were on the southern boundary of the Lebeki National Park, stumbling through the jungle and following half size Pygmies in pursuit of a dream.

The dream started a few years ago. To bow hunt one of Africa's most beautiful and elusive trophies. The majestic Bongo.

My client and longtime friend Yawan was with me slogging through the vines and mud, garden scissors in one hand and a Hoyt Viper set at 90lb in the other. The Pygmies froze and kept their dogs close. They detected something in the green curtain ahead.

Suddenly all hell broke loose in front as a great roar was heard and the Pygmies did a disappearing act in no time at all. It sounded like a runaway bulldozer and it came straight for us. This sounded serious and I threw my garden scissors away and brought my 475 No2 double rifle up just as the vegetation parted and a big, hairy, angry male Lowland Gorilla screamed at us no more than 12 feet away.

I nearly gave him both barrels in the face. Doing that would book me the executive suite in the Royal Cameroon Jail, as it is very much against the law to harm these forest monarchs, even in self-defense. Luckily he new something of modern big-bore rifles and chose to turn and run. Every day we walked into either Gorilla or Chimpanzee and we could not get away from looking at their doings and way of life.

The morning of the seventh day saw us following a fresh track through a big patch of old forest. It only got light enough to see properly at 9 in the morning because of the jungle canopy that was so thick and high. We have followed a few tracks up to now but something always prevented us from catching up to the Bongo. You need the rain at night to wash away the previous day's tracks so that you do not end up following a week old track. The mud keeps a track looking fresh for a long time.

The Pygmies got exited and asked if they could release the dogs. Every one had a mongrel of some sort to warn him of danger ahead and to bay the Bongo as they will fight rather than run. Without the dogs, no Pygmy will venture into the deep forest. There are lots of Forest Elephant, Angry Dwarf Buffalo and Lowland Gorilla in this jungle.

We ran as fast as we could towards the commotion while the dogs surrounded the Bongo. I had to judge the trophy during the fight to make sure we shot an old bull and not just one that was average. If it was not good enough we would retrieve the dogs and find a new track without hurting the Bongo. During the week we bayed three bulls but neither were over 26 inches. We were looking for at least 28 inches. Many people do not like the idea of using dogs. I love it because you can make sure that only the old non-productive males are hunted.

The dogs went crazy to our front. We ran as fast as the jungle allowed us which was not fast at all. The Pygmies were far ahead. The first I saw of him was when he came through a bush trying to hammer a dog into the ground. This was a monster. I saw on Yawan's face that he new this was the one. Finally, after a lot of maneuvering we got an angle where we could take a shot without hitting one of the dogs. The Pygmies were all high in the trees pointing and making a noise. I got Yawan into position and told him to wait for a clear shot. The Viper was at full draw. A 700gr custom arrow made from a carbon, kite-shaft, tipped by a 210gr Steelforce broad head lay ready in the rest.

Suddenly, the Bongo turned and Yawan released the Viper's tension. A complete pass-through at 9 yards and the dream became reality. The dogs were tied and the Pygmies began their Dance of the Bongo, as this was a religious animal to them. We were all awe struck by the animal's beauty. The trophy measured a full 31 inches and that was an added bonus. The Pygmies humbled us all when we got back to camp. They danced and stuck green leaves into our clothing to imitate the jungle and the hunt. Even the village chief and elders showed us respect by waving at us with palm leaves. 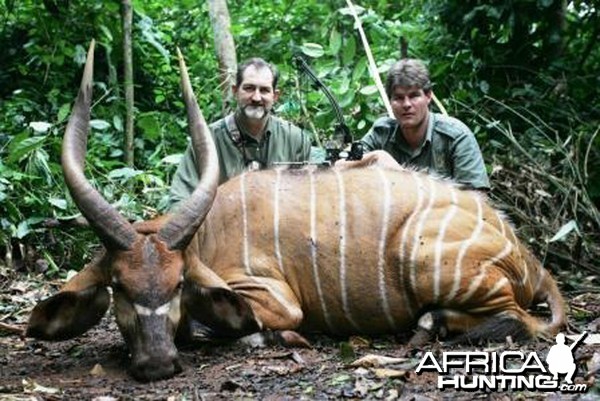 Later that week we got an even bigger gift from the jungle as we managed to hunt the new world-record Forest-Sitatunga, but that is a story for another day. We will be back in that green sea one of these days to have a go at a Forest Elephant and the meanest of all bovines, the Dwarf Buffalo.

Thank you, to Yawan. The best friend a P H can have, and to the Baka tribe of Pygmies that gave us a glimpse of their shadow-life in the jungle.

Fritz Rabe
Askari Adventures
Last edited by a moderator: Dec 1, 2016
You must log in or register to reply here.

Back from a BONGO hunt in Congo Brazzaville