Fifth,and last ? time around.
it seems strange to be submitting a hunting story that doesnt involve a handgun.when i was booking our flight i was informed that the airlines that we had to fly from joberg to final destination no longer allowed handguns.south african express carried two of our handguns in 2005 and again in 2007,but no more.so i was stuck with having to use my double in 9.3x74r cal,the same cal that i had intended on using in my scope sighted encore.i had always intended on taking something dangerous in africa with it any way.fate just pushed up the time table.things started off bad as the computers were down at the airport in idaho falls,everything had to be done by hand and that resulted in being charged for baggage that had already been paid for.at least they checked everything through to joberg.four lousy flights over and four worst than lousy flights back.my fault as im to cheap to pay for business class.as i realized on the way back that i paid for my buffalo with what i saved by going coach.NEVER AGAIN.we will fly business class or i aint going,PERIOD!!! we finely arrived at joberg and spent a great night at the city lodge airport hotel.we used afton house for meet and greet and as usual things went smooth while in their care.only way to go.they did my gun permit in advance.we would of stayed with afton house but they were booked solid a year in advance but they did take care of our reservations at the hotel.we flew into hoedspruit the next morning and were met by ernest,our outfitter and p.h..the camp we stayed at is no longer a hunting camp,it will strictly be a photo safari camp in the future.more antis in africa than here.we hunted three different properties on this trip.first day was for the hippo.that was my main goal.the property was about 40 mins away.we met with the land owners rep and after introductions went looking for hippo.the first three ponds netted nothing.we hit paydirt on the fourth and last pond.first hippo spotted was a calf by itself.as we went around we began to see other hippos.all told there were 8 different animals.in this group the one we were allowed to shoot was huge and identified by the fact it had only one eye.solids were out because of the closeness of the rest of the group.we spent hours trying to get a shot at the right one.it would pop up like a bobbing apple and go down again.i had to wait each time for ernest to ok the shot.we walked around that pond about 7 or 8 times.it was about 125 yards across and 200 yards long.at long last everything came together,but i was a little slow on the trigger and my shot hit a little low between the eyes,hit the water first.when it came up the blood was shooting out of its forehead in spurts.how it was still alive no one could say.after we retrieved it the gash in its forehead was 3 inches long and 3/4 wide.you could stick your finger in the slot knuckle deep.we kept following it as it moved around the pond.it would break water and id put another round in it.once it surfaced and looked at us and you could see it moving toward us,Ernest was telling me to get back,that it was going to come at us.i was to busy trying to end it and didn't pay attention.next thing i new was him grabbing me and dragging me back.out of the water a mad,pissed off hippo came,when it saw we wernt where we were supposed to be it went back into deep water.a couple more shots and it rolled over and sank.36 minuets later it floated to the surface.the land owners rep stripped down to shorts and while the trackers threw rocks to keep the other hippos busy, Ernest and i stood guard with our rifles ready.he swam out and tied a rope around the front leg and he was towed ashore. with rope and winch and people the hippo was rolled ashore so the skinning and whatever could be completed.it was quite a day to say the least!we took what we wanted and the rest was the property of the land owner.needless to say i was very happy with our success.being a handgun hunter i new i needed to do a lot of practicing with my double to be successful.i didn't get all i wanted as the wind here in Idaho hit 35 mph quite a bit,a little breezy for target practice,and i always like to practice in the field.but,sight picture,breath control,trigger squeeze,that's pretty standard.i was able to get a couple more trophys on this trip, but that will be another couple of stories.Good hunting to all,and remember,dont talk about it, JUST DO IT!


jd,hope this comes through,not Hemingway by any standard ,but hope will show that any one can do it.

This hunt for the cape buffalo bull was the most satisfying,everything went perfect.on the fourth day of my hunt we drove the blocks looking for a good bull.we saw a lot of animals,not so many bulls.it was a good relaxing day.day five we were up early,fast breakfast and on our way.about half way through the day we spotted some bulls.tracking began. Those who have hunted buff know the drill,winds are your worst enemies,followed by oxpeckers and other animals. We were busted many times,but kept going.we stopped for lunch and resumed the hunt after we ate.as on the other hunts it felt weird carrying a rifle instead of my scope sighted handgun,but that was the way it was.i was kind of enjoying using my double.added to the romance of old Africa[eat your heart out,allen quatermane,]loved that movie.anyway,we finely spotted the old buff we were looking for.he was standing with his head to our left,about 55 to 60 yards away.in the edge of some brush,looking to his left and right.when he looked to his left I didn’t have the shot I wanted as his head was covering his shoulder.when he looked to his right I squeezed the right barrel,the 286 gr woodleigh hydrostatically stabilized solid hit in the middle of the triangle,being used to my single shot handguns I didn’t shoot the left barrel,stupid,stupid,need more practice,anyway it worked out perfectly.i reloaded the right barrel and we went after him.he had turned to his right and ran down an embankment to a dry river bed.we followed and halfway down we heard one death bellow,by the time we hit the sand we heard his 2nd death bellow.when we cleard the brush we saw him laying dead on his right side,faceing away.my ph wanted an insurance shot so I hit him behind his left shoulder.upon examining him my ph noticed the 2nd solid had exited the right boss over his right eye.complete pass through.after the usual congrats,pics were taken and we repositioned the buff for more pics.when we turned him around and rolled him over we noticed my first shot had also resulted in a complete pass through,in his left shoulder area and out his right sided last ribs.if this is indeed my last African hunt I cant complain,my wife and I have had 5 magnificent trips to Africa,all successful,but if I do go back it will be on business class and with our HANDGUNS!!!i promise,THATS ALL FOLKS!!! 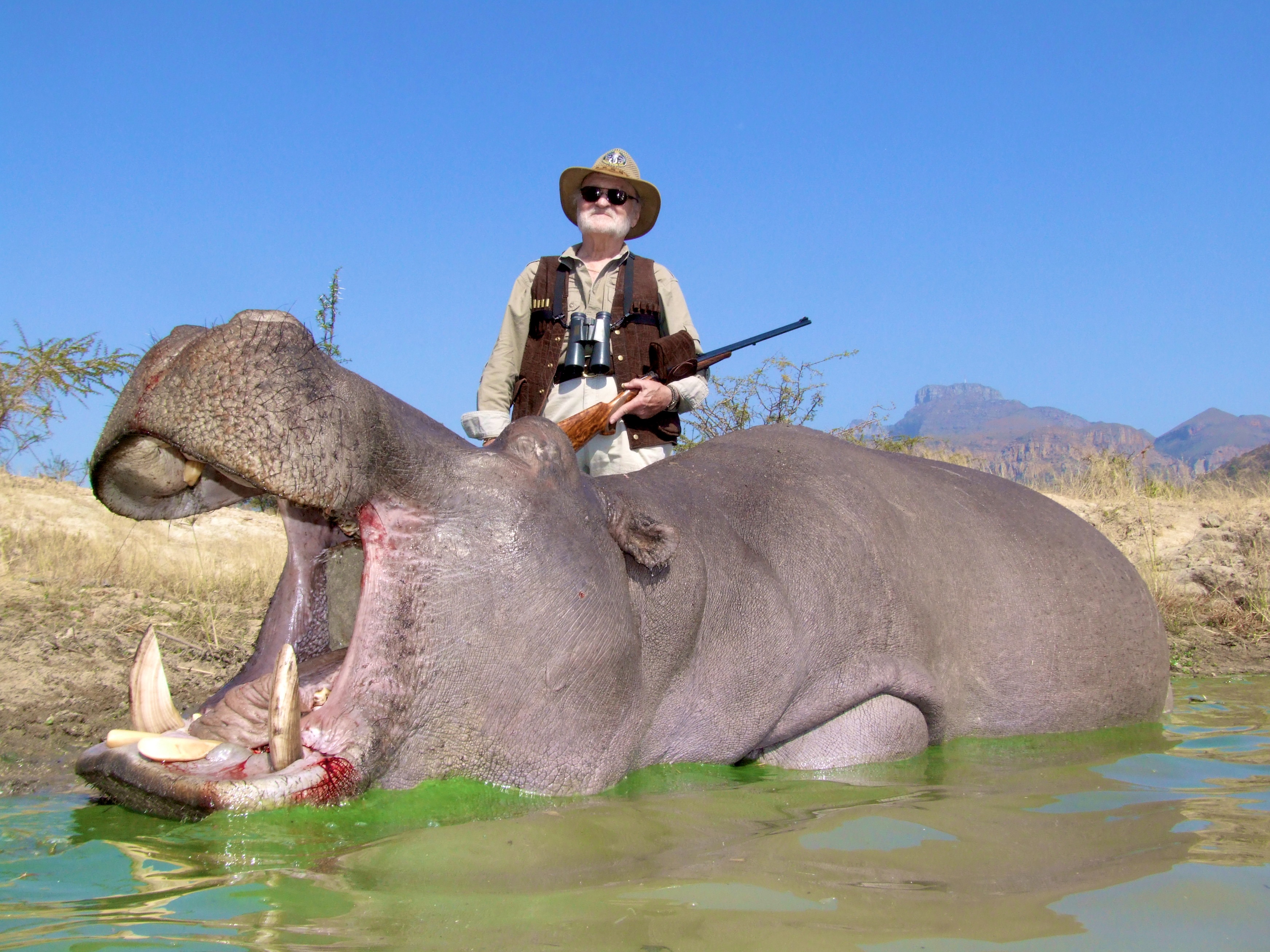 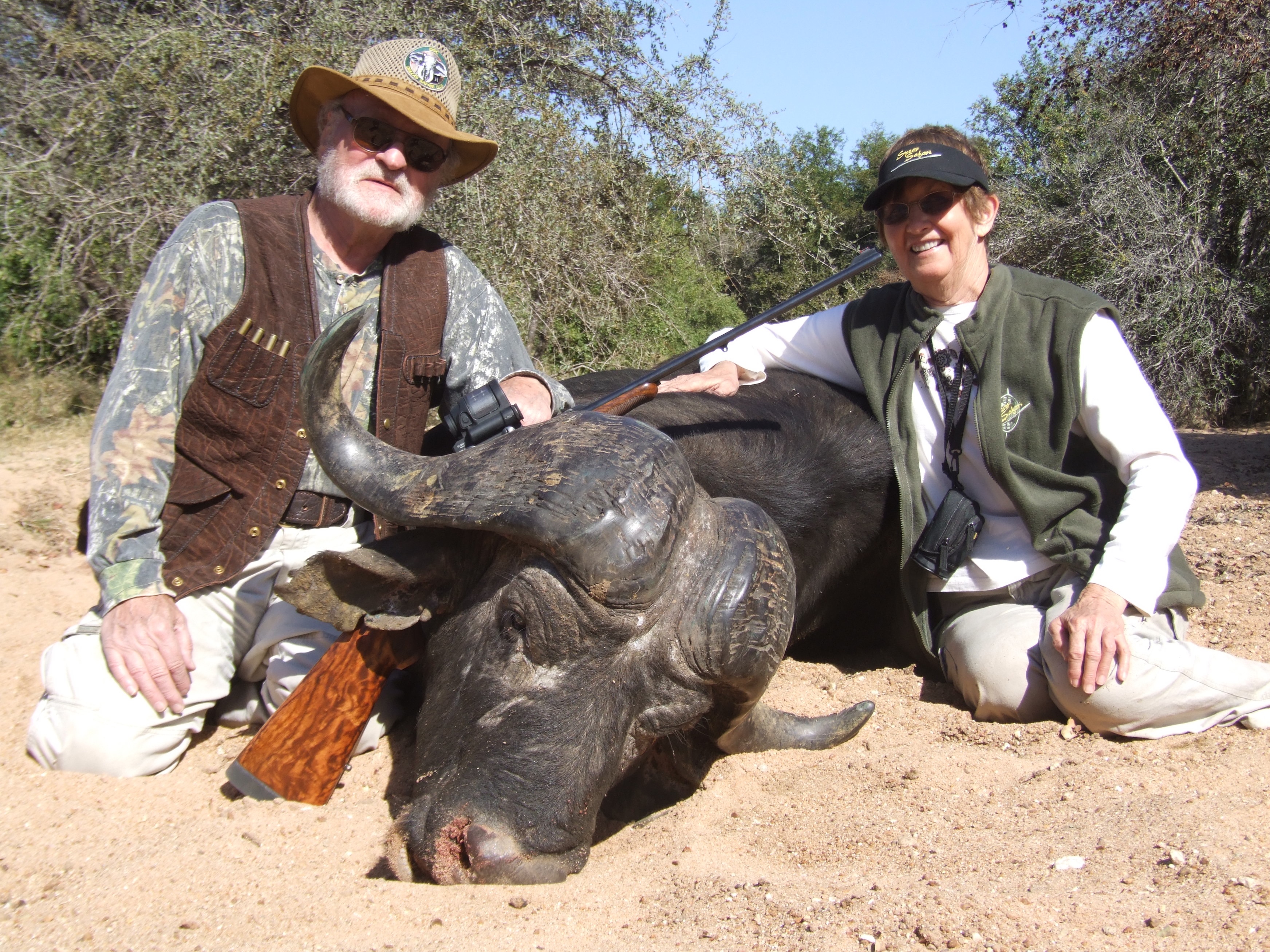 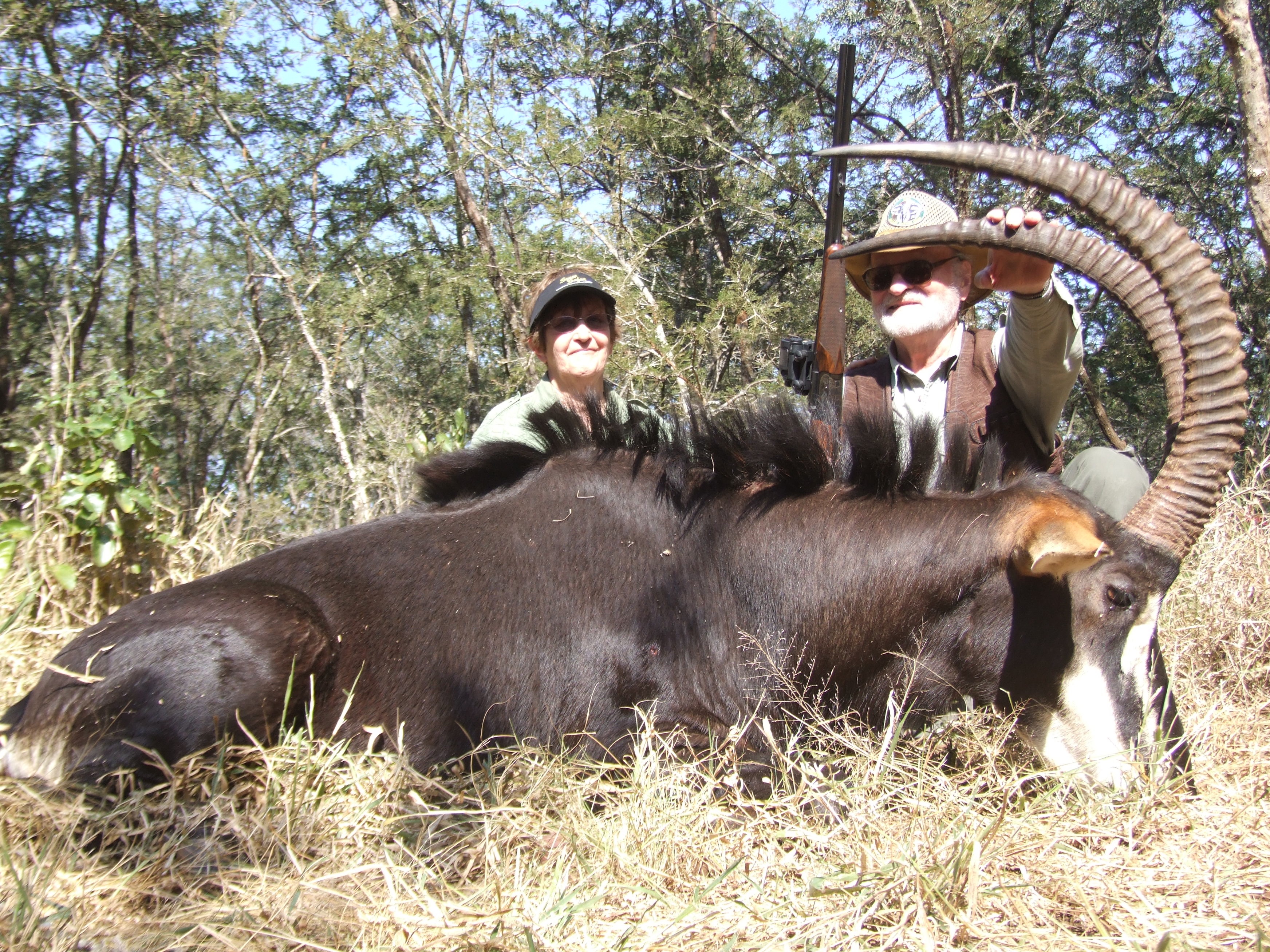 I left off with a successful hippo hunt,this part involves my sable. After the hippo we took a day off to sight see Ernest’s new camp sight. It is always great to be back in Africa ,sitting around the fire and gurgling great south African cab’s,viewing all the wildlife available,listening to lions roar during the night,it cant be beat.on our third day we took off to the property of ernest where he lives and has huntable animals on his land.sable was to be the target.it was amazing that all the animals we saw could care less about us,except the sable.zebra,nyala,giraffe,ostrige,warthog,impala,etc,just watched us drive by.just the slightest sight of a sable and it was gone.we spent several hours trying to locate one that we could just observe,no luck.finaly my wife deena saw one that we all missed and pounded on the cab down the road.ernest stopped and we bailed out and proceeded back to where she thought it was.before we got to the spot ernest saw the sable and pointed it out,it hadn’t become awhere of our presents yet.i finaly saw it and ernest had the sticks up and ready.the shot was 50 or so yards but through some very thick bush.i didn’t feel good about the shot because of the small window I had and he was facing away from me at an angle.ernest had me using soft points instead of the woodliegh solids I wanted to use.ernest thought this might be my only chance so I took the shot.down he went,not for long.up and gone.hind site is great but worthless.had I used the solids the bullet would of kept going through the front shoulder taking everything out from the left hip on through the body and out the right shoulder but that’s not what happened.not thrilled about this one so will make a long story short.about three more hours tracking,one tracker thought it had left the block,ernest thought it was still in the original block,so we divided the two trackers.i stayed with ernest and the main tracker.after about another half hour the tracker saw it lying down,almost dead but still strong enough to get up.one quick shot through the on side shoulder and that was that.guess ill never learn not to shoot unless im dead sure of a clean kill.once a hot dog always a hot dog.that sable went through hell because of me.this is one of those times when the end dosent justify the means! Guess ill end this part of the story until part three,a much better result with my cape buff bull.sorry about the out of position on this part of the 3 part story,a geek im not.

Thanks for sharing with us! Enjoying it!
John 3:16

Thanks sir. I enjoyed it thoroughly.

Absolutely grand hunt Ed! That SxS with the red dot looks like a lot of fun! Some very fine trophies! A hippo is on my bucket list.
Thanks for sharing! I needed an Africa hunt fix and this certainly helped out!
Africa on my mind.

Looks like a very nice sable. Congrats on your hunt. Thanks for sharing.
Bruce
You must log in or register to reply here.