.Eight full days of hunting to get on the shooting sticks, and in 3 min. or less. It was all over. Day nine was spent with the elephant retrieval. Some outfitters allow the local natives to come in and retrieved what meat they want from the elephant themselves, but C&M prefers to have the entire camp staff retrieve all meat from the elephant and delivered it personally to the local villages. After we had taken from the elephant the trophies that we desired ,the rest of the camp staff stayed behind and reduced the elephant into four separate truck loads, and personally delivered those truckloads of protein to the individual villagers that had been raided by the elephants the prior night's. When the camp staff had finished doing their job,there was absolutely nothing left of that elephant but a spot on the ground, and to say that the smiles on the villagers faces were as big as our smiles, was definitely an understatement. On day 10 we went out hunting for plains game, but to no avail. Saw plenty of sign,but no sables, so we went back to camp and started getting ready to return home. The return home was as usual 35 hours of hell. My wife and I had a ball on this hunting trip, we would've not missed any part of it for anything in the world. The only problem now is, what do we do for that fifth time around? 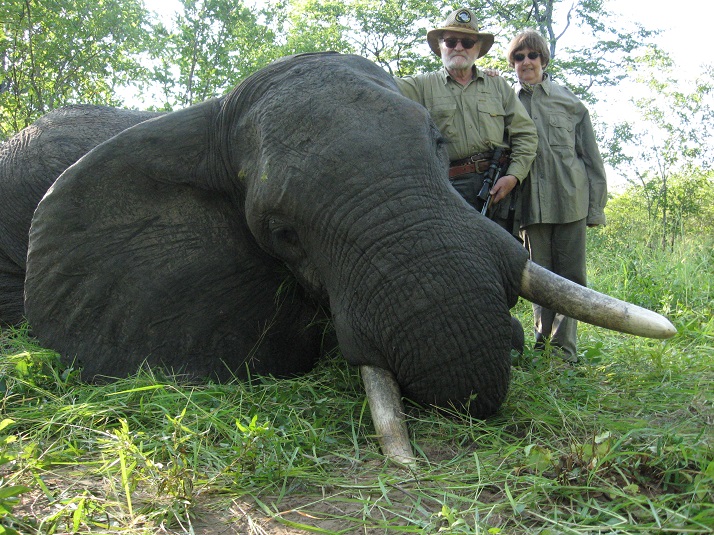 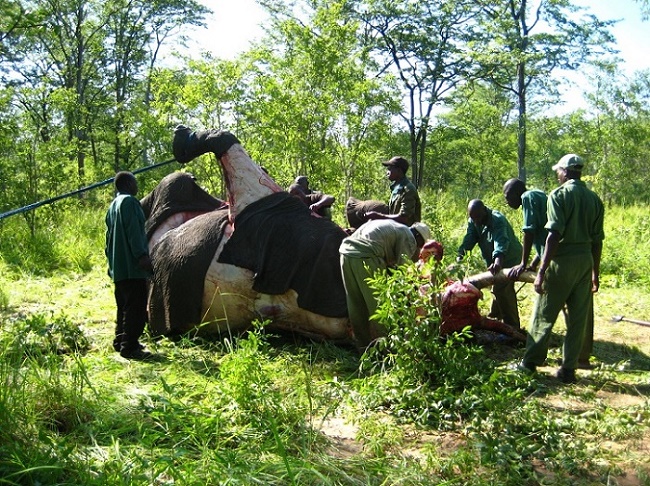 Your question about what to hunt on a 5th safari...
How about Lord Derby Eland?
“They that can give up essential liberty to obtain a little temporary safety deserve neither liberty nor safety.” Benjamin Franklin 1759

Thanks for sharing with us!
John 3:16

Great report Edward! It is really nice to see your wife along. I hope one day my wife will care to go, but that is just wishful thinking!

cpr0312 said:
Thanks for sharing with us!
Click to expand...

shes my hunting partner,out shoots me 9 out of ten times.

Your question about what to hunt on a 5th safari...
How about Lord Derby Eland?
Click to expand...

Congrats on the elephant. Nice bull. Sounds like a great hunt. Thanks for sharing.
Bruce

Leopard would be a cool hunt...and mostly from a blind.
Combine it with some PG that can be used as bait and you are good.
And you look plenty tough to me with a Bull Elephant next to you.

Sometimes it's not so much the animal, it's the fact that the animal is in Africa.
“They that can give up essential liberty to obtain a little temporary safety deserve neither liberty nor safety.” Benjamin Franklin 1759

BeeMaa said:
Leopard would be a cool hunt...and mostly from a blind.
Combine it with some PG that can be used as bait and you are good.
And you look plenty tough to me with a Bull Elephant next to you.

Sometimes it's not so much the animal, it's the fact that the animal is in Africa.
Click to expand...

i was 71 on that 4th hunt,did do a 5th in 2014,thought id already posted 4th and 5th hunts.must be getting senile and old at the same time.

Another of your grand hunt experiences! So glad you took the time to share with us!
Like Mort, I too am envious you got your wife to go with you!
Africa on my mind.

What an experience! Thank you for taking the time to share.
“If there were one more thing I could do, it would be to go on safari once again.”
- Karen Blixen
You must log in or register to reply here.