I got this sent over to me again today after loosing the pics for a while.

Not the greatest photo in the world but here is an 18,5 inch Common Reedbuck hunted in Natal. As far as we now he is the biggest to come out of South Africa for quite a while (correct me if I am wrong) 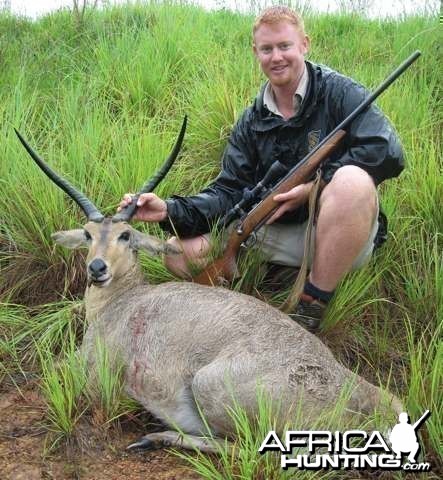 As you can see both me and my gun were soaked after the stalk, over 700m of crawling through wet grass on a cold and overcast day in Kokstad.

Final shot (once I stopped shivering) was at 150 m. The best part of this hunt for me was that at the shot, the buck got a fright, ran 5 yards then stopped not knowing what had happened. He then put his head down to graze again and about 10 seconds later simply toppled over.

Having grown up hunting Reedbuck they hold a special place with me, even ahead of Kudu or Old Warthog Boars. Their supreme eyesight and ability to read body language even from over 1000yards off is uncanny. Keep in mind that these are not the pasture grazing Reedbuck you will find grazing like sheep in winter. These old boys make it the hard way, living off the veld and fighting for territory.

As an interesting twist in the tale, this ram according to the rings on his horns was at least 11 years old. At the time that I took him he was still in excellent condition and holding a territory of about 600 acres. There were 5 younger rams all with territories that bordered on the big old rams. Over the previous 3 years we had come across several young rams dead in the field that we attributed, due to puncture wounds, to having come up against the old male in winter to compete for territory and taken one of those horns through the ribs.

Since he was removed, there are now 4 other rams of about 6-8 years of age (13-16 inchers) who have divided the territory. They have brought with them 12 females. Strange thing was that while the old guy held the territory, he only ever kept one female with him for the better part of 2 years.

Anyway, his genes still seem to be present in the other groups, two of what appear to be his sons, are pushing the 16" mark so with any luck there may just be an RW #1 coming through in another 3 years or so. That is if they survive the winter.

Give them a whistle and make a long shot, but thats not the way I like to hunt them. Getting close after 500m of belly crawling in open terrain is one thing, getting 50m closer down the side of the same valley they are grazing in brings a whole new meaning to hunting without cover.

You effectively need to have the wind in your favor, the animals blissfully unaware and patience enough to stop moving and wait it out at the slightest sign of restlessness.

When their 6th sense starts talking to them you need to read those tiny little signs of nervousness that start to show. The extra flicking of the ears, the twitch on the back from that non existent fly, the flash of the white on the tail. All of these say stop and lie still. If you lie long enough even the ones that may have glanced in your direction will eventually settle. Push it too hard and they all charge off whistling and bouncing.

The big ram and his doe were caught unawares because I stuffed grass into the front of my hat band and slithered along in the wet with the grass partially falling over the top of me. The combination of long stems and heavy wet seed heads gave me a moving tunnel of partial protection. They also gave me a constant showering (which ended up ruining that stock you see on the rifle). The new synthetic I had fitted by Armtec is however all set for this season.

With the lack of adrenalin he tasted good too and was tender as can be. Not what we would have expected from such an old Ram. As table fare, though I may be biased, there is nothing to touch Reedbuck for flavor and texture.

All in it was one of my favorite hunts ever, and only really possible due to a combination of weather and veld conditions and of course enough patience to keep me still, even when it hit 10 degrees and that wind chill started to bite.

But like they say, its the ones you really pain for that you remember the most.

Good Hunting
Ian
Last edited by a moderator: Dec 1, 2016
You must log in or register to reply here.

Bowhunting Reedbuck, Diamond in the Rough